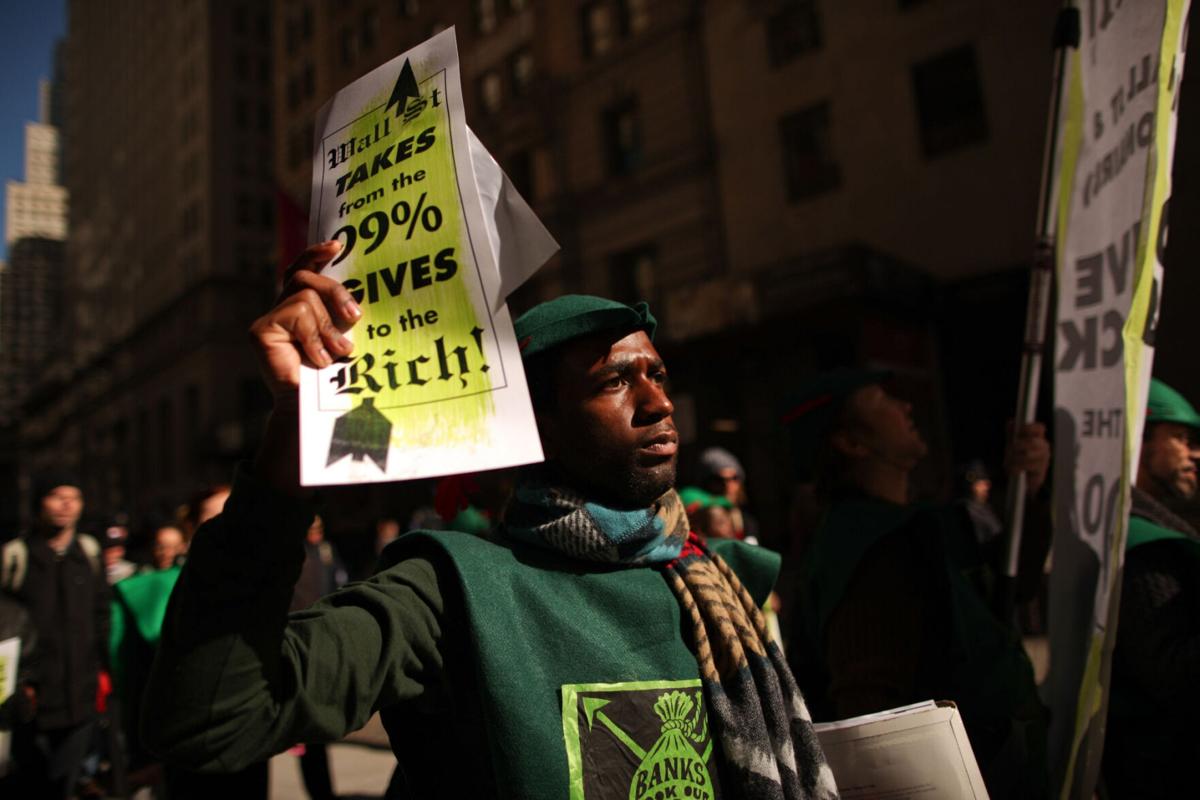 Protesters dressed as Robin Hood marched on downtown New York to rally for a so-called Robin Hood tax that would tax the rich and give to the poor in Manhattan on Oct. 28, 2011. Kevin Hagen/New York Daily News 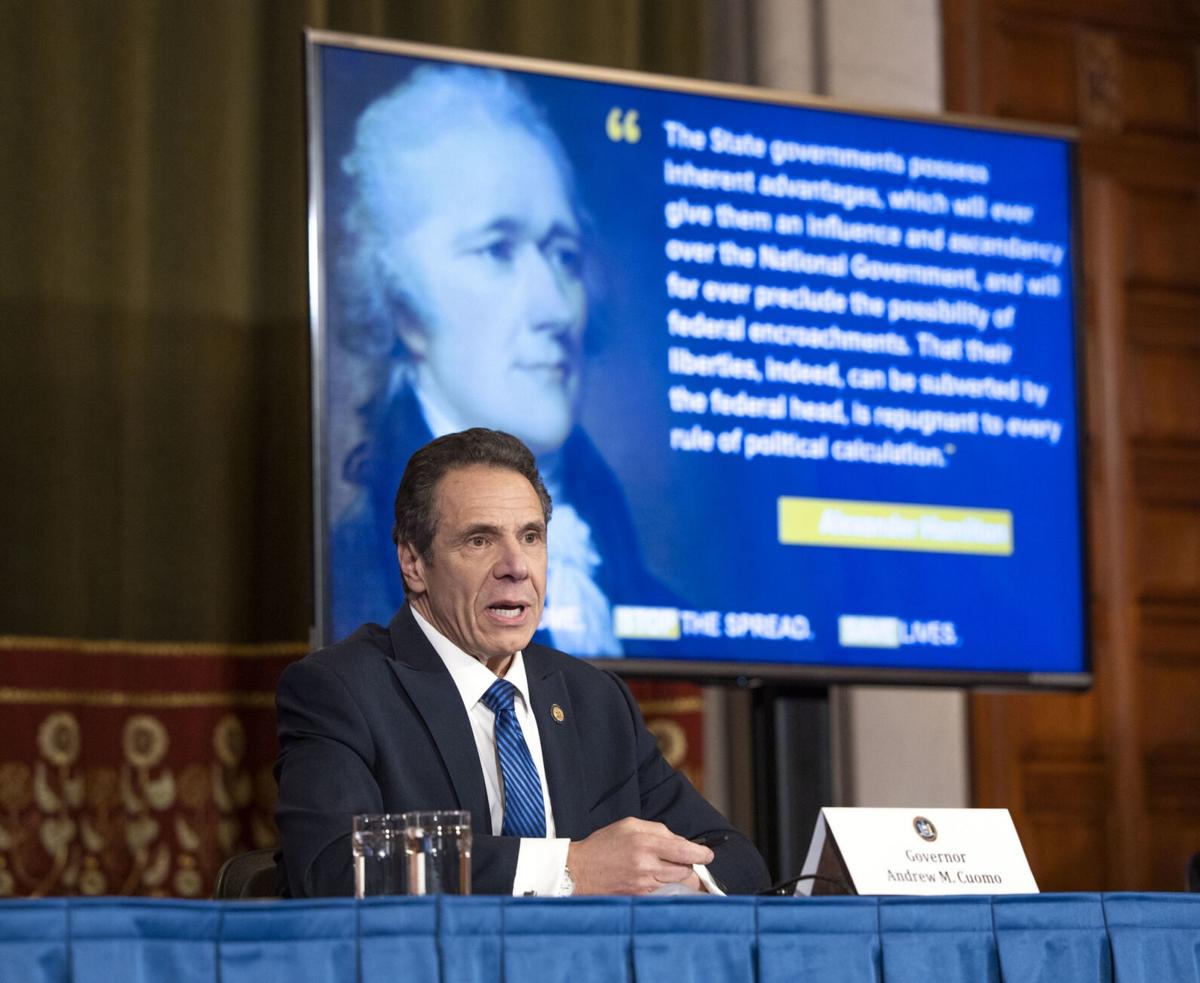 Gov. Andrew Cuomo speaks during a coronavirus briefing at the Capitol in Albany on March 14. The governor has spoken out against supporting an additional tax on New York’s wealthy residents, saying it doesn’t make mathematical sense from a budget standpoint, and would drive top wage earners to move out-of-state. File photo

Protesters dressed as Robin Hood marched on downtown New York to rally for a so-called Robin Hood tax that would tax the rich and give to the poor in Manhattan on Oct. 28, 2011. Kevin Hagen/New York Daily News

Gov. Andrew Cuomo speaks during a coronavirus briefing at the Capitol in Albany on March 14. The governor has spoken out against supporting an additional tax on New York’s wealthy residents, saying it doesn’t make mathematical sense from a budget standpoint, and would drive top wage earners to move out-of-state. File photo

For months, Gov. Andrew Cuomo and top state officials have pleaded for federal COVID-19 relief for states and localities as New York faces a $14.5 billion revenue deficit this year and a nearly $30 billion budget gap over the next two years.

Fiscal Policy Institute Executive Director Ron Deutsch argued Tuesday it doesn’t have to be that way, and said the nonprofit research and education organization has worked with lawmakers for months to establish a fair tax code in New York.

“We’re asking the wealthy to help pay their fair share to help balance the budget,” Deutsch said. “The likelihood of federal aid materializing seems more and more remote by the day. New York families really need relief, and we really need it now.”

A Hart Research Associates poll found 90% of the 663 registered New York voters sampled from Aug. 12-18 supported tax hikes for New Yorkers who make an annual salary over $1 million, while 88% support increases on incomes over $5 million. Democratic lawmakers and advocates referenced the findings during a press conference Tuesday.

About 92% of Democrats and 82% of surveyed Republicans responded in favor of increased taxes on the wealthy over proposed budget cuts.

“We just can’t do this — the need has only increased during this pandemic,” she said Tuesday, adding mental health issues and overdoses have tripled statewide since the pandemic began.

“We have more needs and we have to address them.”

Bob Master, assistant to the vice president of Communications Workers of America District 1, said a tax on stock transactions and a robust wealth tax on state billionaires’ income could raise between $20 billion and $25 billion.

“We could be generating billions and billions of dollars to prevent many of these cuts that are being proposed,” Deutsch said. “The governor is calling them delays, but these are cuts. We can generate revenue to mitigate the harmful impact of these cuts.

“The Legislature can live to be a bit more aggressive in their revenue raising to help this budget shortfall created by the coronavirus,” Deutsch added. “Now is the time for shared sacrifice, and that includes asking the wealthy to pay a bit more so services are not slashed to close this deficit.”

New York City is home to 113 billionaires — higher than any other nation in the world.

“And that’s not even talking about the thousands and thousands of millionaires,” said state Sen. Robert Jackson, D-Manhattan, recounting how lines half-a-mile long persist at city food pantries.

Establishments in Chinatown continue to provide 10,000 meals to hungry New Yorkers each day.

Metzger has introduced bills to tax corporate buybacks, and reviewed her history of advocacy of increasing taxes on corporations and New York’s ultra-wealthy.

“They have to help us shoulder this burden,” Metzger said. “Middle-class working families cannot afford it. ... We cannot ask them to pay for this. We cannot ask our communities to absorb these cuts.”

The survey findings showed minimal difference in supporting taxing the rich based on the region in which voters reside.

About 86% of voters in support of the tax proposals live upstate or in New York City’s suburbs. About 83% of those surveyed are New York City residents who prefer new taxes on millionaires instead of reducing the state’s education and health care or other program spending.

“It’s hard to imagine a more important issue for New York,” said Gottfried. “Even if we got support from Congress, which is questionable, for the impacts of COVID, we desperately need more revenue in New York to take care of our health care and people with affordable, quality housing. We needed it before COVID. We need it now, and we’re going to need this regardless of whatever happens in Washington.”

State leaders are exploring several options to raise taxes on the wealthy, including raising income taxes for households that make more than $500,000, an added tax on luxury homes or apartments valued over $5 million that are not a family’s primary residence or taxing state billionaires.

Jackson is sponsoring a bill to extend the top state income tax rate to 11.82% for taxpayers whose New York taxable income is over $100 million and directs the revenue to foundation aid. Sens. Jamaal Bailey, D-Bronx; Brian Benjamin, D-Harlem; Alessandra Biaggi, D-Bronx; and Leroy Comrie, D-Queens co-sponsor the legislation, which was referred to the Budget and Revenue committee in January.

Jackson is ready to return to Albany to vote in favor of reform that raises revenue against New York’s wealthiest citizens.

“We must do it and we must raise the pressure on each and every one of the 213 legislators, along with the governor to make sure we can survive this pandemic,” Jackson said.

“There’s many other bills. We need to act, and we need to act now. If the leaders call tomorrow, we’re ready to come back now,” Jackson added.

About 30% of the 663 surveyed voters agree lawmakers’ effort to tax the wealthy is pointless, disbelieving the change would solve the state’s budget problems.

Cuomo has dismissed the call of fellow Democrats to increase taxes on state billionaires or New York’s wealthy, saying mathematically, the fiscal numbers don’t add up to close the state’s budget hole without federal assistance.

“There is no combination of savings, of efficiencies, of tax increases that could ever come near covering the deficit, and we need the federal government to assist in doing that — period,” Cuomo said Monday.

Cuomo has also argued such a tax increase would drive top wage earners out of New York, further increasing the burden on other taxpayers.

Jackson said Democrats must secure enough votes for a two-thirds majority to override a potential veto, as Cuomo does not support increasing taxes on the rich.

“When we make that decision to tax the wealthiest New Yorkers, we want to have that super-majority to give it to the governor and the governor will have to, for the betterment of New Yorkers, he would have to sign it into law,” Jackson said. “If not, let it burn his hand and his heart with respects of not representing the people he was elected to represent.”

David Friedfel, director of state studies with the Citizens Budget Commission, agreed the federal government should fund states and localities, but that the state should reduce capital spending to minimize impact on cuts to essential services.

“That could be a large part in closing the budget gap,” Friedfel said Tuesday.

New York’s top 1% of wage earners pay about 40% of the state’s personal income tax, or about $20 billion, Friedfel said.

If lawmakers increased taxes on the wealthiest New Yorkers this year, tax filing deadlines would prevent the state from receiving full annual revenues from the change for about two years.

“It would require significant sacrifice in order to close this year’s gap,” Friedfel said, adding the state forecasts an $8 billion-plus budget gap this year, and a shortfall of more than $17 billion next year.

New York has the nation’s second-highest combined tax rate at 12.7%. California boasts the highest at 13.3%.

Jackson argued the state’s top 1% would not cross state lines, and with more than 8 million city residents, celebrities can more easily hide in the crowd and live a normal life.

Friedfel reviewed the Citizens Budget Commission’s state budget recommendations that the nonpartisan, nonprofit organization released in May. The commission discouraged broad 20% cuts to spending areas such as education, as cuts to the state’s 713 school districts should be targeted to the largest and wealthiest districts.

“If you slash all payments in an equal percentage, you end up hurting the highest-need school districts the most,” Friedfel said. “It’s really an unfair way to do it. They would have been much better to target those cuts to those districts that can absorb them best.”

The state has about $3.5 billion in a “rainy day” reserve fund.

“Generally, we have advocated the state should have more reserves and more put away in the past, but now, it’s raining,” Friedfel said.

To date, officials have not used the reserve money for pandemic spending.

The Legislature continues to wait for the state Budget Division’s permanent spending reduction plan, which is expected to be released by the end of the month. Lawmakers would have 10 days to review or modify the plan.

“The sooner you make the cuts, the better off it is for everyone,” Friedfel said. “The longer you wait, the deeper those cuts are going to have to be to get the same amount of savings.”

And cause more people to choose to migrate from increased tax burden??? Two of the main reasons people flee from this state are the tax load and the disdain for civil liberties. How about we tackle some of the top heavy government waste such as “acting commissioner” pays, the constant waste created in irresponsible spending due to poor policy choices, etc.

That's a short term solution, sure. But, how about NY gets with the program and legalizes recreational marijuana, and takes in the dough like other states are, including our neighbor, Massachusetts.

There's a huge source of income and taxation, just waiting for our elected officials to get with the times and enable it to happen.