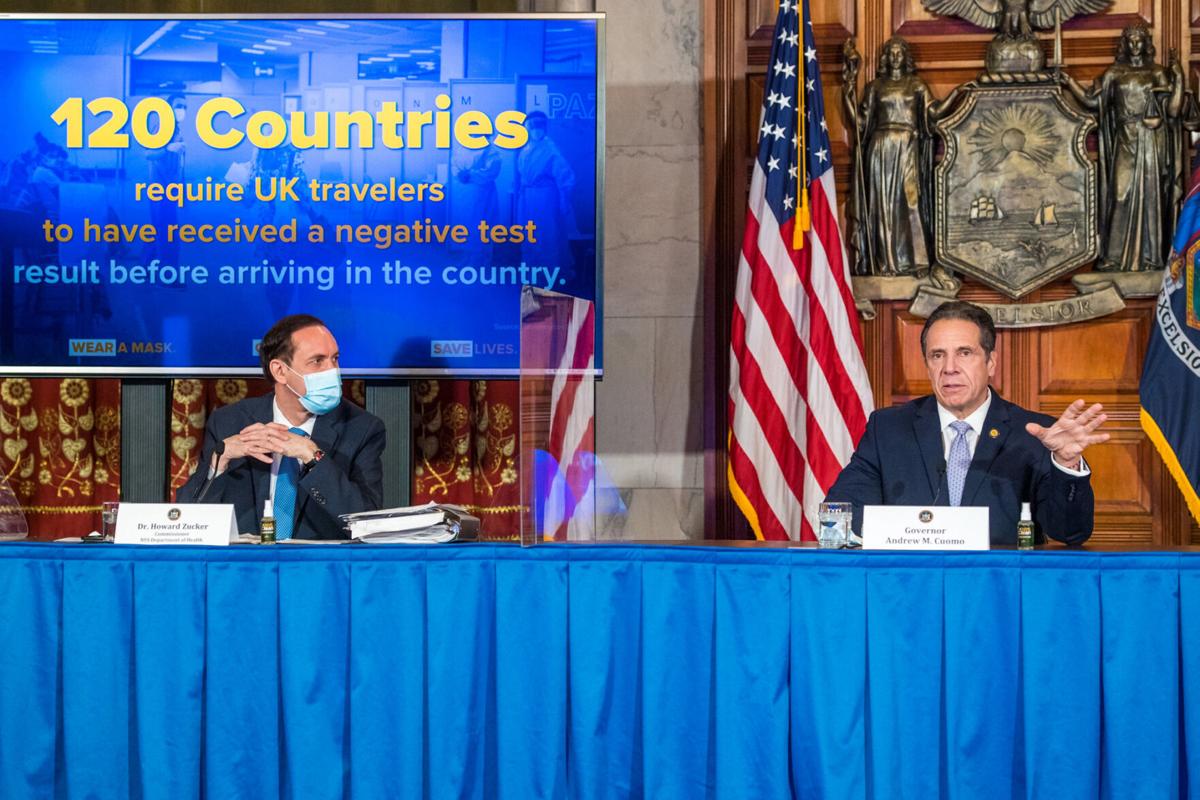 Gov. Andrew Cuomo speaks about requiring travelers from the United Kingdom to receive a negative coronavirus test before arriving in New York during a COVID-19 briefing in the state Capitol on Monday. Courtesy of Gov. Andrew Cuomo’s Office 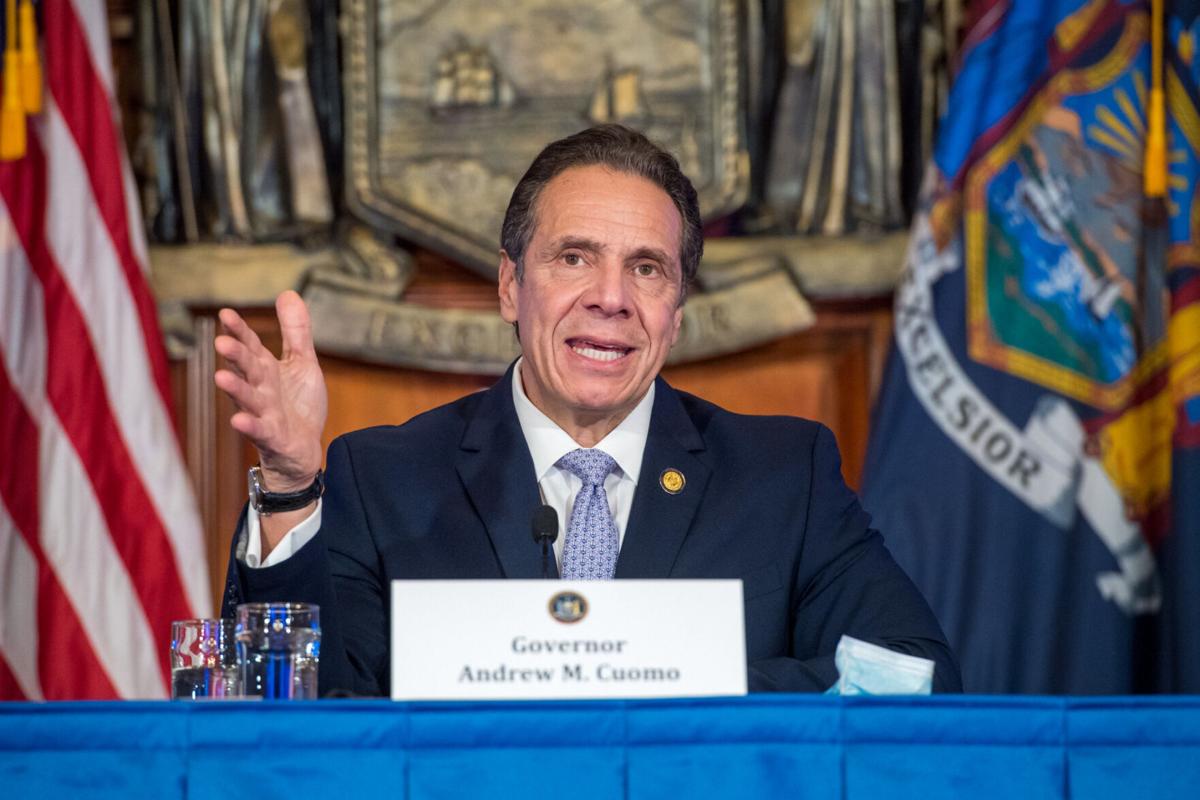 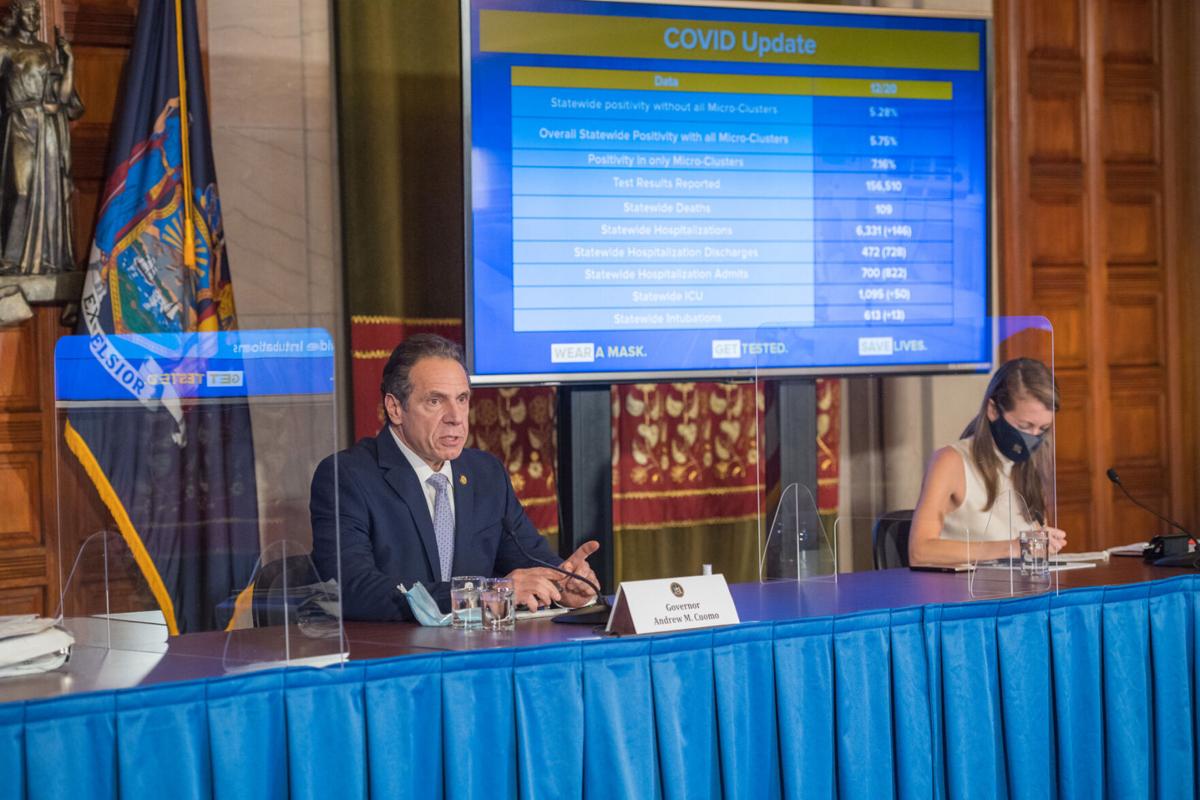 Gov. Andrew Cuomo speaks about requiring travelers from the United Kingdom to receive a negative coronavirus test before arriving in New York during a COVID-19 briefing in the state Capitol on Monday. Courtesy of Gov. Andrew Cuomo’s Office

ALBANY — Two international airlines will require passengers from the United Kingdom to show a negative COVID-19 test before flying to New York state, adding the state to a list of 120 countries after a new, highly contagious strain of the novel coronavirus was recently discovered in the U.K.

British Airways and Delta Airlines agreed Monday to require travelers to test negative for the novel coronavirus before boarding flights to New York state as scientists announced a new, highly contagious strain of COVID-19 spreading through the U.K. that Prime Minister Boris Johnson has said is 70% more transmissible than earlier variants of the disease.

British Airways and Delta added New York to a growing list of 120 countries that require a negative coronavirus test for U.K. travelers, including Canada, Denmark, France, Germany, Italy, Ireland, Israel and Spain, among others.

Virgin Atlantic had not agreed to the state’s request as of press time Monday.

“‘Well, you’re not a country,’ — I know that, but as governor of New York state, I have asked them to do that,” Cuomo said of his request to the three airlines Monday during a COVID-19 briefing in the state Capitol. “I am only a governor, but I will do anything I can and everything I can to protect the state of New York.

“People in government believe doing nothing is safe,” the governor added. “‘If I do nothing, I won’t be criticized.’ I don’t believe that. I believe that’s exactly wrong.”

The coronavirus initially spread in states like California and New York from millions of European travelers who landed in major coastal airports late last winter, according to the Centers for Disease Control and Prevention.

European travel was not restricted in the U.S. until mid-March. Cuomo has lambasted the federal government for not acting sooner, or at least warning state officials of the public health threat.

“My request is simple: Please add New York to the list,” Cuomo said. “If they do not agree voluntarily, New York state will consider other options.

“I would not be doing my job as governor of New York if I sat here and let the federal incompetence create another emergency and disaster that cost the lives of New Yorkers.”

Details about the mutated strain of COVID-19 are limited. Health experts do not know if the shifted disease is more deadly, or causes a higher rate of death.

Officials do not know if Pfizer’s and Moderna’s approved coronavirus vaccines are effective against the new strain.

The immunization was tested to be upwards of 95% effective in fighting the initial illness.

“If the U.K. believes this strain is so serious that Boris Johnson, who said the week before ‘we’re not going to cancel Christmas,’ did a 180-degree turn and closed parts of the U.K. — it’s serious, my friends, and we are on notice about it,” Cuomo said.

Authorities have not located or traced the new strain in the U.S. to date, the governor said. Federal health experts act based on science, and may not do anything about the mutated virus until it’s confirmed on American soil.

“I believe, intuitively, it’s already here,” Cuomo said. “If it’s been flying around the world, it will be here. I have an educated intuition because I lived this. You lived this.

“I believe my intuition is correct, that this is another disaster waiting to happen.”

The state’s Coronavirus Task Force and top officials will act before a second wave of COVID-19 sweeps New York.

“If this is more transmitable than COVID — 70 times, says Boris Johnson — this is a major problem,” Cuomo said. “For us to once again be incompetent in the federal government and take no action is just not a viable option for us in New York. We learned this lesson the hard way, and we’re not going to go through it again. We have been victimized by federal incompetence and federal negligence, that is a fact, and we’re not going to be victimized again.”

The state’s COVID-19 infection rate increased to 5.28% excluding microclusters Monday, or 5.75% including all focus areas — up from about 4.5% through most of last week.

Statewide, New York has a 6.36% average infection rate over seven days, and has the nation’s fourth-lowest COVID-19 rate, below Alaska, Hawaii and Vermont.

The Finger Lakes and Mohawk Valley regions continue to have the highest COVID-19 infection rates at 8.28% and 8.46%, respectively.

The greatest number of New Yorkers hospitalized with the virus live in the Finger Lakes region, with 735 patients, or 0.06% of the region’s population. The state reports 205 patients hospitalized in the Mohawk Valley at 0.04%.

Hospitalizations in Western New York, which includes the city of Buffalo in Erie County, remained exactly flat at 474 people at 0.03% after having the state’s highest number of new coronavirus infections and deaths for several weeks.

Capital Region hospitalizations climbed to 348 patients or 0.03% of the population Monday, up from 331 people over the weekend.

Mid-Hudson and North Country virus hospitalizations have remained steady, with 745 people in Mid-Hudson, up six, at 0.03% and 57 people in the North Country, down six patients, or 0.01% of the population.

New infections continued to spike over the weekend from last week to 6.92% in the Capital Region, 5.10% in the North Country and 6.25% in the Mid-Hudson region.

Positivity decreased to 6.64% in Central New York and 6.42% in Western New York.

The upstate regions are higher than New York City and Long Island at an elevated 4.28% and 6.39%, respectively.

The state reported 109 New Yorkers died from the virus Sunday — slightly down from last week’s daily fatality rate of around 120 virus deaths in a 24-hour period.

“I can’t tell you the pain it causes me to read the death number every day for 296 days,” Cuomo said.

5 ways to create a healthy indoor environment this season

A simple guide for planning a DIY bathroom project

Ace the Spring Semester With the Following Tools and Strategies