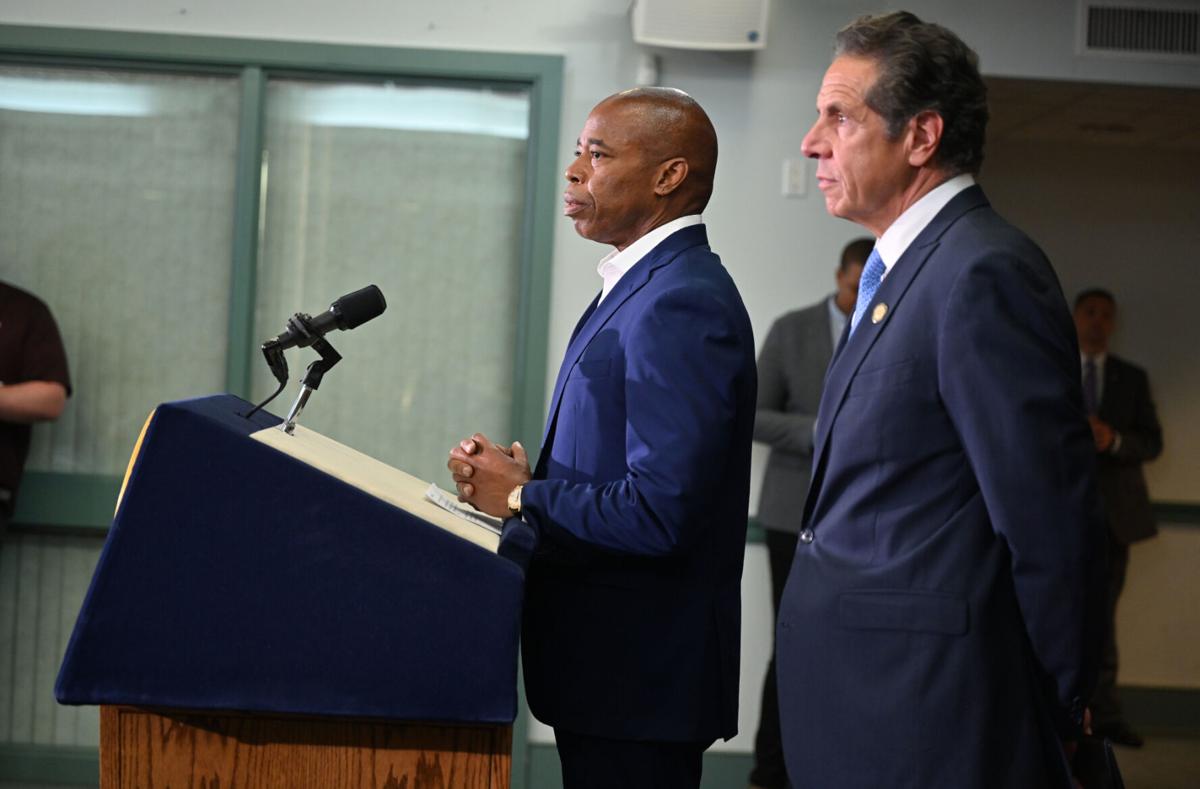 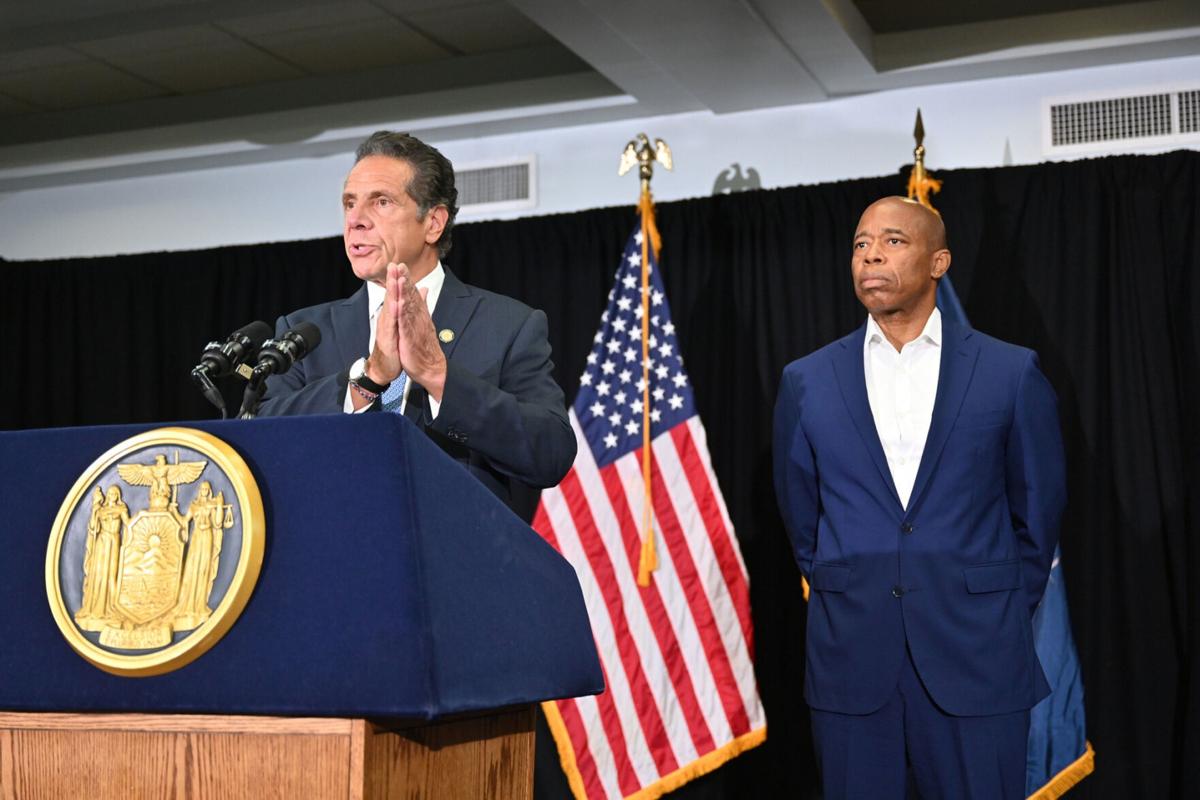 Gov. Andrew Cuomo speaks in Brooklyn on Wednesday with Brooklyn Borough President Eric Adams, right, the presumptive next mayor of New York City, to announce the state will fund thousands of jobs for at-risk youth as part of a new initiative to combat gun violence. Courtesy of Gov. Andrew Cuomo’s Office

Gov. Andrew Cuomo speaks in Brooklyn on Wednesday with Brooklyn Borough President Eric Adams, right, the presumptive next mayor of New York City, to announce the state will fund thousands of jobs for at-risk youth as part of a new initiative to combat gun violence. Courtesy of Gov. Andrew Cuomo’s Office

BROOKLYN — The state will create thousands of jobs for high-risk New York City youth this summer in efforts to combat growing concerns about the exponential rise in urban shooting incidents and violent crimes.

Officials met Wednesday to target a continuing surge in gun violence in Central and East Brooklyn by engaging youth ages 15 to 24 with summer jobs in the areas where shootings are most prevalent.

The state will spend $17.9 million to create 2,000 summer jobs and will partner with the Consortium for Worker Education to provide long-term employment for 2,388 young people who live in New York City neighborhoods most impacted by gun violence after an increasing number of children and teenagers fell victim to recent shootings.

“We have more people dying of gun violence than COVID,” Gov. Andrew Cuomo said Wednesday inside Brooklyn’s Lenox Road Baptist Church. “It’s not enough to say ‘No, don’t do drugs, don’t join a gang.’ There has to be an alternative. There has to be hope, and we’re going to be working with the community today.”

The Consortium for Worker Education will provide initial job training and then connections to more specific occupational training and job placement, Justin Mason, spokesman with the state Office of Temporary and Disability Assistance said in a statement.

“The Summer Youth Employment Program funds jobs for individuals between 14 and 24 years of age, typically for a six-week period during which time the young person has the opportunity to develop workplace skills while earning the minimum wage,” Mason said. “Placements can be made in a in a range of employment settings including childcare/summer camps, hospitality, information technology and other settings.”

Community services and assistance for mental health support, substance abuse treatment and family crisis intervention will also be expanded as part of Cuomo’s July 6 executive order to mandate gun violence a public health crisis and using short-term solutions to reduce the shooting rate and long-term community-based intervention and prevention strategies to break the cycle of violence.

The executive order allows the state to expedite money and resources to communities for the initiative, according to the governor’s office.

“Those countless number of men and women everyday workers that they want safe streets ... They want to stop hearing gunshots instead of alarm clocks,” said Brooklyn Borough President Eric Adams, the presumptive next mayor of New York City. “They want to ensure that they can be employed and live in an affordable city. Those are the bread-and-butter issues that I believe are crucial to not only the city of New York, but this entire country.”

Adams served as a New York Police Department officer for 22 years, and stood in solidarity with the governor Wednesday to push for the state to fund crisis management teams in city hot spots of violence, to support the NYPD’s gun suppressio unit and redefine the role of police to rebuild trust with the community.

The city has a problem with illegal handguns and firearms, Adams said, adding about 77% of the victims are Black or Latino and poor.

“If I were to ask you, do you know someone who was shot and killed in the last year, your hands won’t go up,” Adams said. “Go into a classroom in Brownsville and ask a classroom of students, ‘How many have you lost someone to gun violence? How many of you lost a family member who was shot?’ You will get eight out of 10 of those children raised there. Those are the people we have ignored. We’ve normalized, violence in our city and the feeders of violence in our city and then our entire country. That’s what this is about.”

State Republican leaders say Democrats’ criminal justice reforms — such as the 2019 law that eliminated cash bail for most crimes except violent felonies — have directly led to the sharp increases in incidents of violent crime, including shootings and homicides.

“Eric Adams was right about one thing when he said, ‘we’ve normalized violence in our city,’” state Republican Party Chair Nick Langworthy said after Wednesday’s press conferences on the issue. “Democrats have spent the last two-and-a-half years deflecting, lying and calling Republicans hysterical for sounding the alarm about growing crime and quality-of-life problems that have gripped our communities. They ignored the warnings of prosecutors and lifelong law enforcement officials who predicted exactly what would happen with the elimination of bail and rammed it through, anyway, while decrying any criticism as racism. They empowered criminals and tied the hands of law enforcement, and now, they must own the mess they created. No amount of grandstanding or press conferences can hide the truth about their record.”

Gov. Cuomo and Adams met with Brooklyn community leaders, clergy members and legislators to announce the details of the new initiative and help repair the relationship between New Yorkers and the police.

“This is about the people of our community — the grieving mothers, the families that can’t sleep at night, our children that have been lost to bullets day after day, after day, after day,” Sen. Zellnor Myrie, D-Brooklyn, said Wednesday. “...As the day turns to the night, so too will this season of violence become a season of peace, but it requires all hands on deck.

“We are dedicated to ending gun violence in our generation. We can do it. I believe we can. I know we can. And together, we will.”

The state Division of Criminal Justice Services is required to compile incident-level data provided by major police departments on a weekly basis for the Office of Gun Violence Prevention to track emerging gun violence hot spots and deploy resources to areas most in need under the governor’s gun violence disaster emergency.