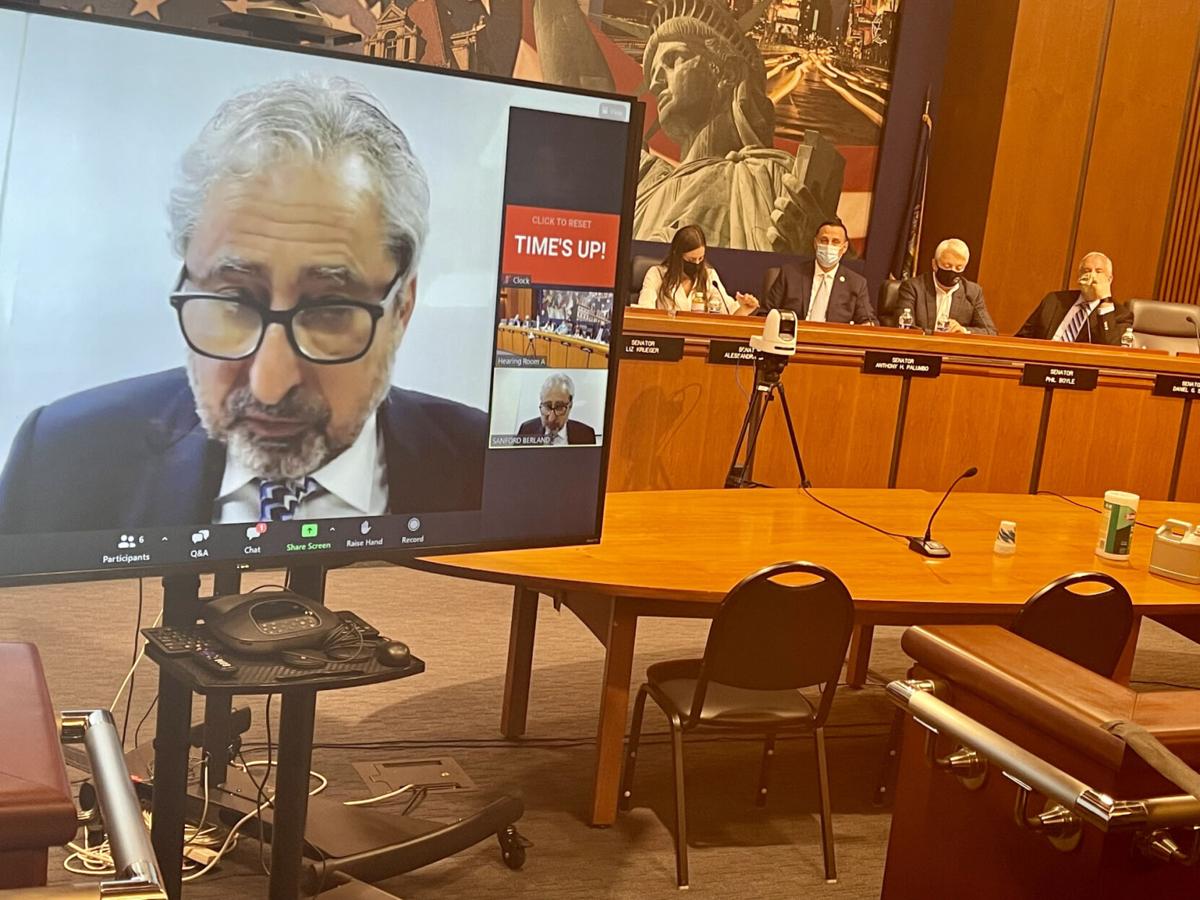 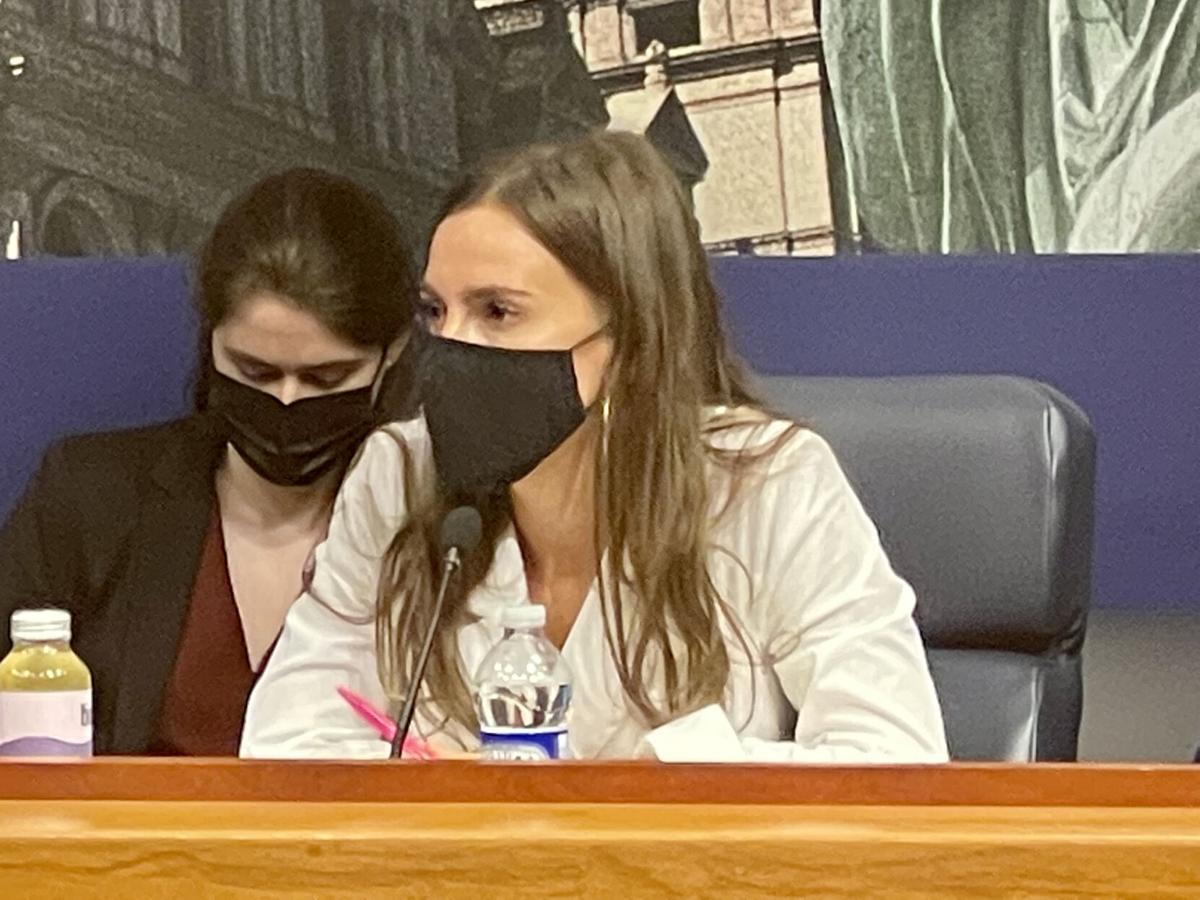 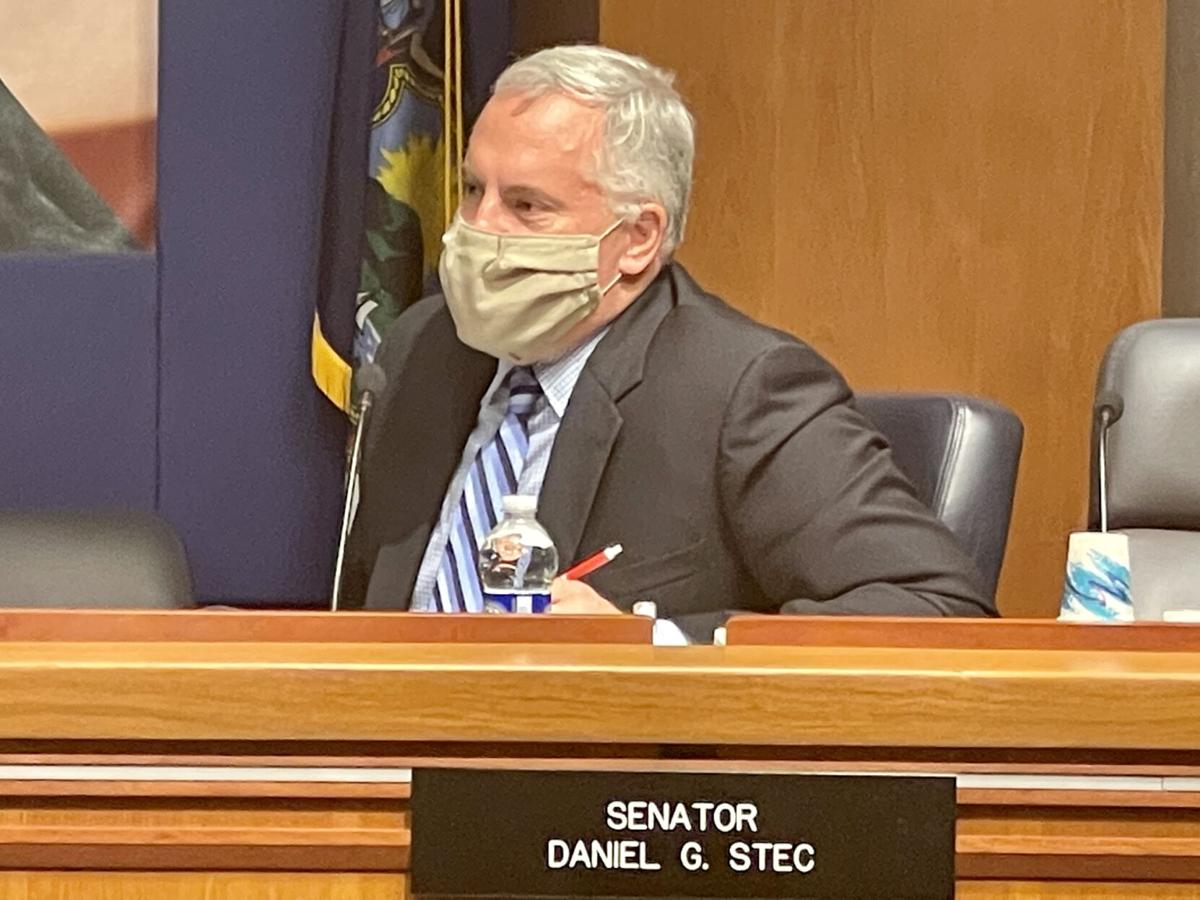 Sen. Dan Stec, R-Queensbury, speaks to a witness Wednesday during the Senate Ethics and Internal Governance Committee’s hearing on the state’s system of ethics oversight and enforcement in Albany. Kate Lisa/Johnson Newspaper Corp.

Sen. Dan Stec, R-Queensbury, speaks to a witness Wednesday during the Senate Ethics and Internal Governance Committee’s hearing on the state’s system of ethics oversight and enforcement in Albany. Kate Lisa/Johnson Newspaper Corp.

ALBANY — The person who leaked a confidential vote to investigate a convicted state official in 2019 remains on the commission responsible for enforcing New York’s ethics laws, a former commissioner testified Wednesday.

Julie Garcia, who formerly served on the state Joint Commission on Public Ethics, or JCOPE, detailed how the state Inspector General’s Office failed to investigate an alleged leak — a misdemeanor offense — about her vote to investigate Joe Percoco, a former top aide and longtime friend of former Gov. Andrew Cuomo, and his misuse of government resources.

Shortly after her vote for JCOPE to investigate Percoco, Garcia received a call from the office of Assembly Speaker Carl Heastie, who appointed Garcia to the commission. She was told the former governor was displeased with her decision.

“I really did feel confident that they would investigate the leak,” Garcia told senators Wednesday. “I thought, in my mind, that the person that actually leaked the information would resign and it would be the end of it, but that never happened.”

Members of the Senate Ethics and Internal Governance Committee questioned multiple witnesses for hours Wednesday to examine the state’s system of ethics oversight and enforcement and how to transform its ailing track record.

JCOPE held its monthly August meeting Thursday. Commissioners were expected to make a decision about Cuomo’s controversial pandemic memoir published during the public health crisis for which he received $5.1 million, but the vote was referred to the ethics panel’s next meeting scheduled for Sept. 13.

Little to no legal precedent makes it unclear how the panel will handle the alleged misconduct. The panel could fine the former governor any amount. JCOPE Executive Director Judge Sanford Berland said Wednesday fining Cuomo $5.1 million or requiring he return the royalties is not off the table.

Cuomo having knowledge of Garcia’s January 2019 vote means someone in JCOPE or the room where the executive session vote took place disclosed the results, constituting a misdemeanor.

The inspector general’s office interviewed Garcia on Feb. 21, 2019 under oath. Heastie, Cuomo and other top officials were never interviewed.

Tagliafierro, who was appointed by Cuomo in 2019 and is JCOPE's former executive director, recused herself from the investigation.

State Sen. Alessandra Biaggi, D-Bronx, who chairs the Ethics Committee, said the conclusion reveals Tagliafierro cannot be trusted to do a fair job as inspector general.

“We need a new IG, obviously, but more importantly, we need these things to be taken seriously,” Biaggi said.

Garcia served on JCOPE from August 2018 until her resignation in October 2019 after the report’s release.

“It’s disheartening,” Garcia said. “People who had information and knew about the leak did not have my back.

“We all understand there’s a reason people don’t come forward and talk about what’s going on in Albany.”

Established under former Gov. Cuomo as part of the Public Integrity Reform Act of 2011, JCOPE has long been criticized for being an unreliable ethical watchdog and too close to the former governor.

Several times during his testimony, Berland requested a larger budget and staff when asked how the Legislature could improve JCOPE’s ethical mission. The commission has a staff of 50 people, and usually administers about 50,000 reports and investigates hundreds of complaints each year, he said.

Berland could not specify why more staff would address ongoing inadequate ethics oversight or JCOPE staffers’ duties when pressed by lawmakers.

He would not answer several of Biaggi’s yes-or-no questions, including if it was concerning the identity of the commissioner who leaked Garcia’s vote remains unknown.

Berland replied, several times, with great hesitation, that he’d like to find out the answer, but added it was not impacting his day-to-day work.

“The executive director, I frankly have no idea what he said,” Biaggi said during a break halfway through Wednesday’s hearing. “I don’t think he said much of anything.

“The things that he refused to answer are very much in the purview of what he should be answering,” she added.

Berland repeatedly declined to give straight answers to lawmakers’ queries or blamed things he could not say on the nature the Legislature created the entity in 2011.

“Three men who are all out of government with serious ethics violations are the people who wrote this law,” Krueger said of JCOPE’s creation. “So I don’t know why anybody is surprised that it’s not working.”

The Democratic-led Senate approved a bill of Biaggi’s to strengthen JCOPE and remove seemingly partisan advantages in appointing people to the commission. The bill, which had no companion in the Assembly, would also change voting requirements and make it easier for the embattled board, criticized for being too closely tied to the governor, to launch investigations.

“[Garcia] is what a public servant is in every single way,” Biaggi said. “And the irony of this is why she’s sharing what it’s like. It just underscores the point of why good people leave government, and why the bad people stay and that is what rocks democracy.”

Krueger has proposed a constitutional amendment to create a new ethics commission with half Republican, half Democrat and other independent appointees.

A constitutional amendment must be passed in both houses of state Legislature in two separate legislative sessions, and then must be passed by voters as a referendum in the general election.

The constitutional amendment must be done, Krueger said, but added other ethics reforms could be legislated in the meantime.

“I think quite a few of these legislative proposals are critical and should be done — I don’t think we want to have three years without improving our ethics legislation,” Krueger said during a break in the hearing. “... I believe we need to immediately replace our inspector general.”

Representatives from Gov. Kathy Hochul’s office did not answer questions about the new governor’s opinion of the oversight agency, how or if its processes should change and if she will rid JCOPE of Cuomo’s appointments and appoint a new inspector general.

Haley Viccaro, Hochul’s senior adviser for communications, referred to the governor’s remarks about reforming Albany’s unethical culture made during her inaugural address Tuesday.

Gov. Hochul has not directly or publicly addressed JCOPE since taking office Tuesday, but vowed a new era of transparency will be a pillar of her administration.

Hochul directed a policy overhaul on sexual harassment and ethics, requiring all training to be completed live versus allowing employees to basically ignore a digital presentation and requiring each state entity to review compliance with transparency laws and issue a public report on their findings.

The governor will sign an executive order to require ethics training for every state government employee.

Representatives from several good-government organizations testified Wednesday, including the state’s Sexual Harassment Working Group, officials from the Committee to Reform the State Constitution, the League of Women Voters and the New York Public Interest Research Group.

Wednesday’s hearing was originally set to take place July 12, but was rescheduled because of questions about holding a virtual hearing under the state Open Meetings Law.

A second legislative hearing about state ethics oversight will take place in December.

The Assembly will be invited to participate.

An official date has not been scheduled for the subsequent hearing.

*Editor's note: This story corrects an earlier version that stated State Inspector General Letizia Tagliafierro issued the Oct. 4, 2019 conclusion that there was insufficient evidence to substantiate if a confidential Joint Commission on Public Ethics vote was criminally disclosed. The letter was issued by the state inspector general's office. Tagliafierro was not involved in the investigation or publishing the report.