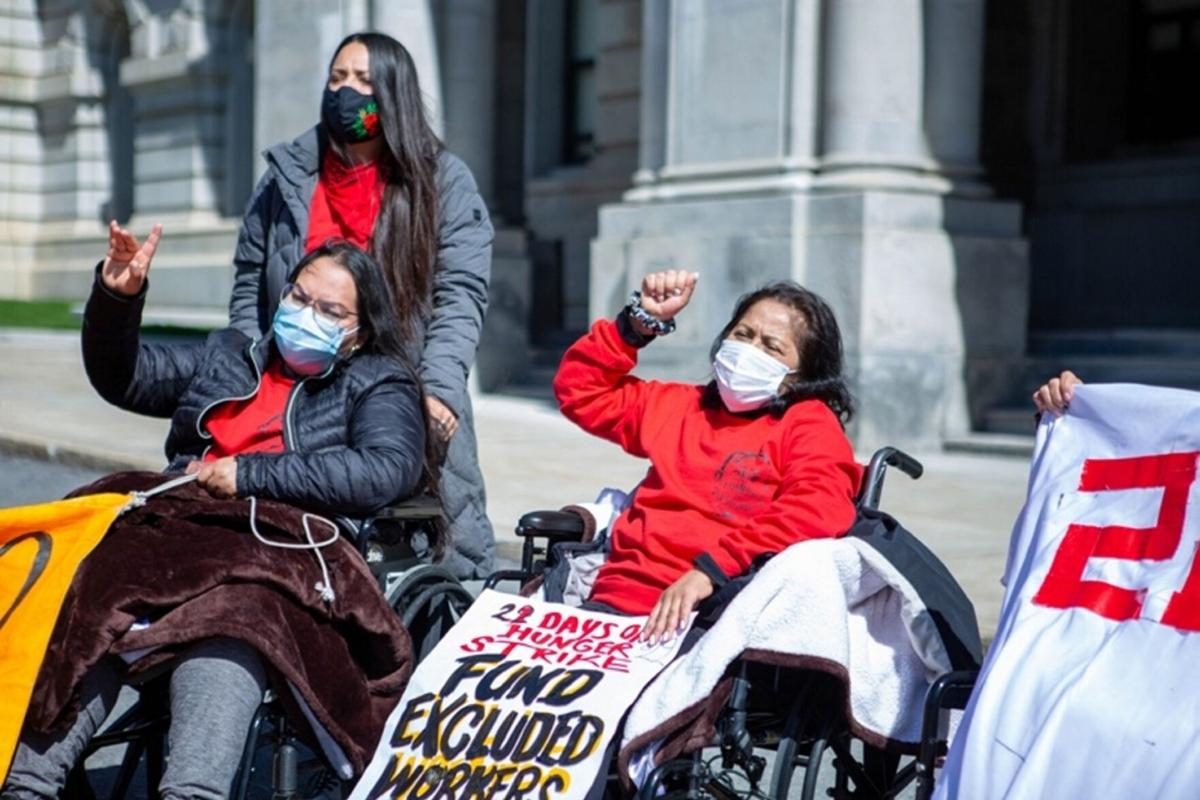 Activists and people on hunger strike for 22 days rallied outside the state Capitol in Albany on April 6, hours before the Legislature announced an agreement to include $2.1 billion for excluded essential workers ineligible for unemployment benefits during the pandemic. Courtesy of Columbia County Sanctuary Movement 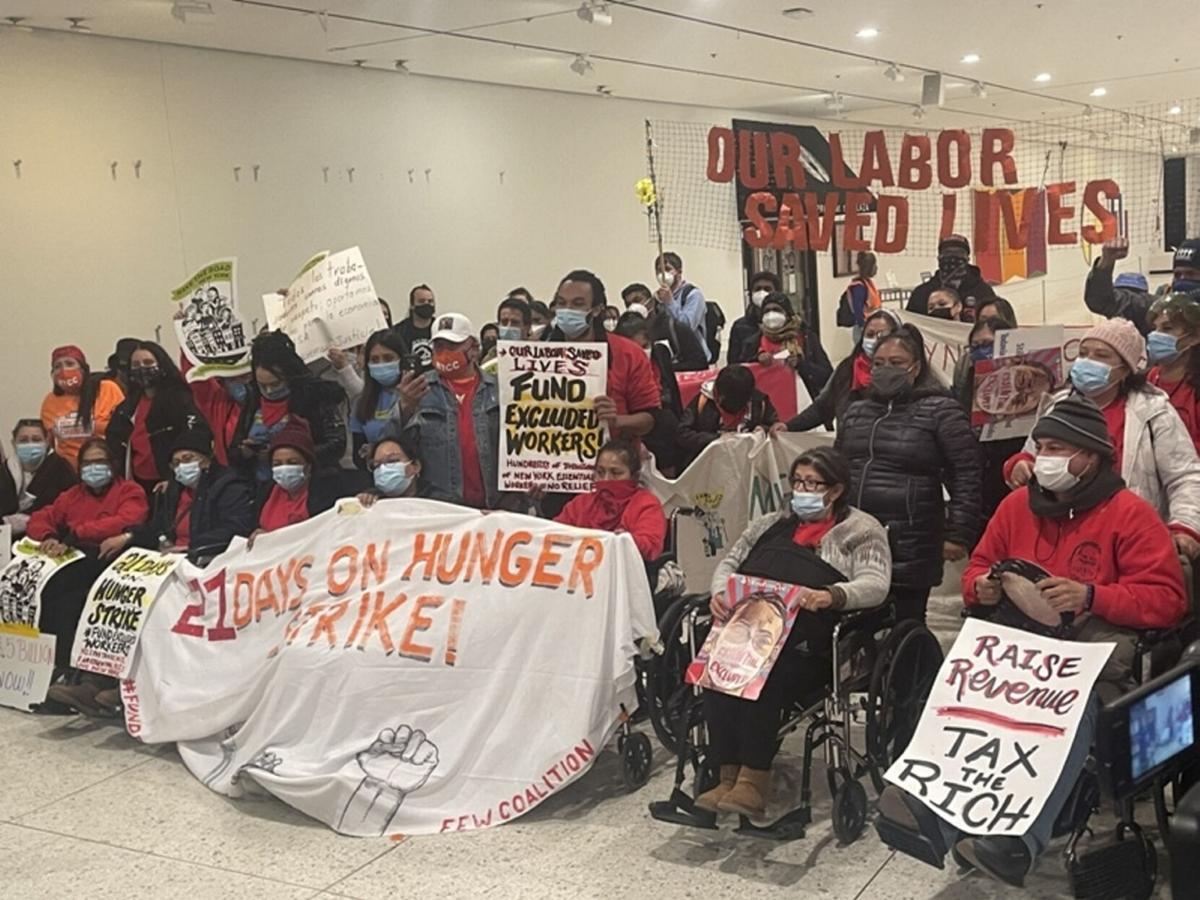 Hundreds of people marched in the Empire State Plaza on April 5 with dozens of immigrant families pushing for aid in the state budget for excluded essential workers. Advocates and essential workers excluded from typical relief are pushing for additional funding to be added to New York’s $2.1 billion Excluded Workers Fund as the program nears exhaustion. Kate Lisa/Johnson Newspaper Corp. 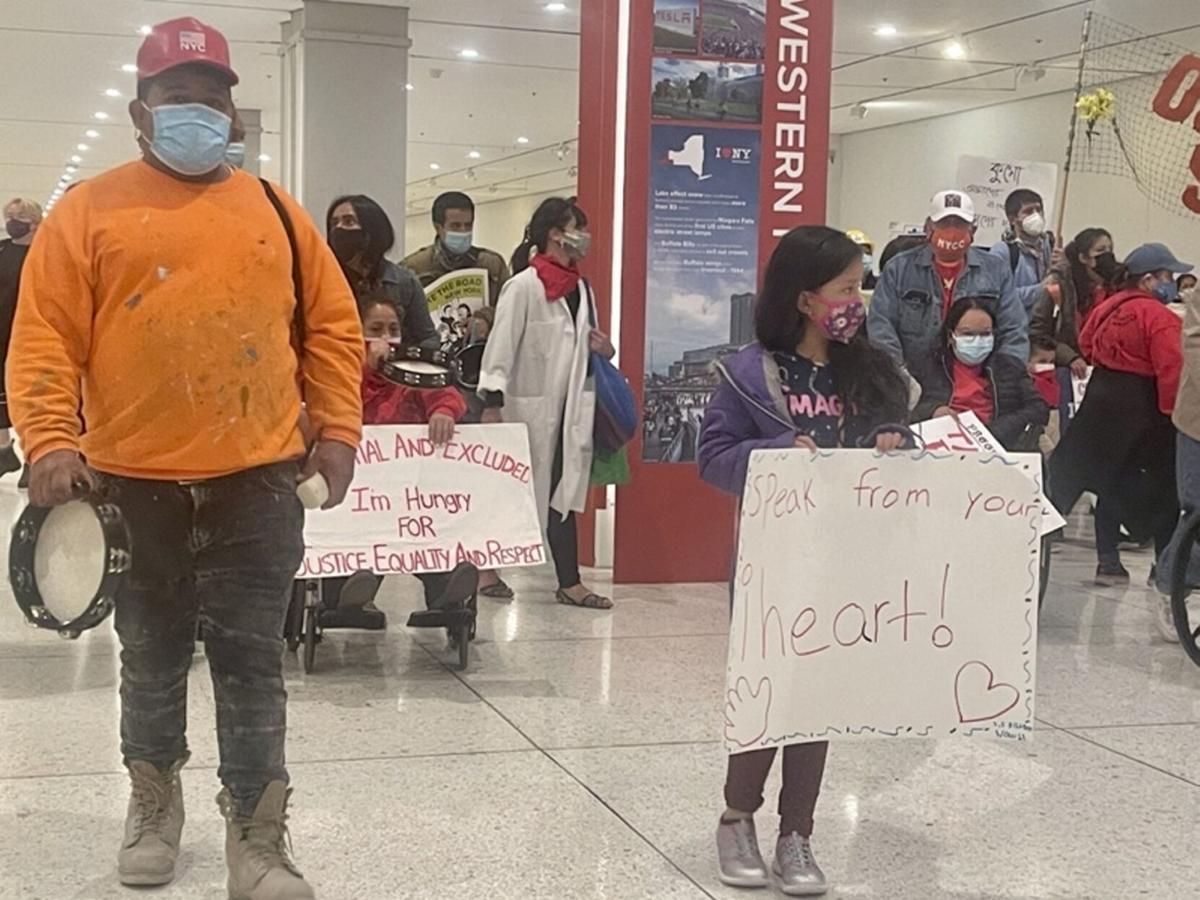 Nelson, with the Columbia County Sanctuary Movement, and his 9-year-old daughter, Chelsea, both of Stottville, rally in the Empire State Plaza on April 5 for the Excluded Workers Fund. Advocates and affected workers are calling on legislative leaders to include more funding for people who have not yet applied as the program runs dry. Kate Lisa/Johnson Newspaper Corp.

Activists and people on hunger strike for 22 days rallied outside the state Capitol in Albany on April 6, hours before the Legislature announced an agreement to include $2.1 billion for excluded essential workers ineligible for unemployment benefits during the pandemic. Courtesy of Columbia County Sanctuary Movement

Hundreds of people marched in the Empire State Plaza on April 5 with dozens of immigrant families pushing for aid in the state budget for excluded essential workers. Advocates and essential workers excluded from typical relief are pushing for additional funding to be added to New York’s $2.1 billion Excluded Workers Fund as the program nears exhaustion. Kate Lisa/Johnson Newspaper Corp.

Nelson, with the Columbia County Sanctuary Movement, and his 9-year-old daughter, Chelsea, both of Stottville, rally in the Empire State Plaza on April 5 for the Excluded Workers Fund. Advocates and affected workers are calling on legislative leaders to include more funding for people who have not yet applied as the program runs dry. Kate Lisa/Johnson Newspaper Corp.

Advocates pleaded Thursday for lawmakers to return to Albany for a special session to add more money to the $2.1 billion Excluded Workers Fund, or state-sponsored COVID relief for undocumented immigrants and cash economy workers, as the fund is exhausted.

In April, the state Legislature committed $2.1 billion in its final 2021-22 budget in April for New York residents who lost wages or income after February 2020 because of COVID-19-related unemployment, inability to work or a COVID-related death or disability of the main source of household income.

The excluded workers include migrant farm, construction, janitorial and other essential laborers ineligible to receive unemployment benefits or other past federal coronavirus aid.

“We’re glad that funds are being dispersed quickly, there are too many who are being left out of the program and unfortunately we are seeing upstate communities are being left behind,” said Emma Kreyche with the Worker Justice Center of NY.

“This is the wrong time to cut off access to this critical program so many people in our communities are learning about the program and are seeking the necessary proof required to apply,” Kreyche said.

Thousands of eligible workers — especially in upstate and rural communities — have not applied for assistance because of difficulties securing necessary documentation to prove financial hardship during the pandemic, transportation or language barriers or eligible New Yorkers who recently learned about the fund.

At the end of September, the state Department of Labor posted a warning on its website that new applications for the fund will no longer be accepted because the assistance is running out, and cannot guarantee funds will be awarded for claims submitted after Sept. 24.

More than 330,000 applications have been submitted with more than 100,000 approved and half the $2.1 billion, with the majority from New York City and the surrounding downstate communities. New York City has 73% of the state’s share of undocumented workers, with 10% in the Hudson Valley, 1.4% in the Capital Region, 0.8% each in the Finger Lakes and Western New York and 0.2% in the North Country.

The department processes applications in the order received.

“Ortiz,” a 32-year-old Hudson man whose name has been changed while his application is pending, had his leg amputated after a diabetes-related infection. He is waiting to receive a $12,000 prosthetic in the coming months.

“This incident changed my life and my economic situation,” Ortiz said Thursday in Spanish, translated by an interpreter. “The Excluded Workers Fund [could] help me finally get a prosthetic leg.”

Ortiz is a member of the Columbia County Sanctuary Movement, which helped him find the necessary documents and complete his application.

Before his surgery, Ortiz worked as a domestic worker and cleaning offices. His hours were drastically reduced during the pandemic, and he became unemployed at the end of March 2020. He learned of the Excluded Workers Fund in mid-August — a few weeks after the Labor Department started taking applications.

He secured the proper documentation from his previous employer to prove his eligibility and submitted his application on Wednesday.

“It is possible I may not receive these funds, but I really need this help to correct my situation,” Ortiz said. “I need help in paying my bills, and I need to pay for this prosthetic leg so I can live my life like I was living before.”

Ortiz, originally from Mexico, does not have health insurance. If his application is denied, he plans to pay for the prosthetic in monthly installments.

Ortiz moved to Hudson, in Columbia County, in October 2020.

Advocates would not name a specific figure in what needs to be added to the fund, or where in the state budget more relief should come from — only pleas for Gov. Kathy Hochul and legislative leaders Assembly Speaker Carl Heastie, D-Bronx; and Senate Majority Leader Andrea Stewart-Cousins, D-Yonkers, to add additional money to the fund as it nears depletion.

Progressives originally requested $3.5 billion for the fund in February at the height of budget negotiations.

Representatives with Democrats in the Senate and Assembly majority conferences did not return multiple requests for comment Thursday about their position on adding additional funding to the program, the potential for a special session for lawmakers to add money to the fund or how the Legislature will address these issues.

“Gov. Hochul made a commitment on her first day in office to get pandemic relief out the door as quickly as possible to support New York’s immigrant and excluded workers,” Hazel Crampton-Hays, Hochul’s press secretary, said in a statement Thursday. “Working with community partners and advocacy groups, this successful program has already delivered more than $1 billion to tens of thousands of New York families who were not eligible for state and federal unemployment insurance benefits, many of whom were essential workers. Within the next few weeks, more than $2 billion, the maximum amount authorized by the State legislature, will have reached the pockets of hardworking families across the state. The governor remains focused on helping our most vulnerable communities as we continue to rebuild and recover from the pandemic.”

Advocates could not provide an updated estimate of the number of eligible New Yorkers who have not applied for the relief.

Representatives with the Labor Department did not immediately respond to requests for comment, including an updated count of submitted and processed applications or how the department would handle additional applications if the fund is increased.

“Unemployment insurance is so important to other workers,” said David Kallick with the Fiscal Policy Institute. “Economists tell us it’s one of the main reasons the recession wasn’t deeper than it was. Poverty rates overall maintained and even went down during this recession because of benefits like unemployment insurances that helps individual families and also helps local economies.”

The Excluded Workers Fund will provide a similar economic boost across New York’s 10 regions, but the recovery is slower in rural communities across upstate.

The lower Hudson Valley has seen a $51 million boom to date from local excluded workers receiving payments from the fund, according to a Fiscal Policy Institute regional analysis. Each region’s estimated fiscal boost is expected to double once the $2.1 billion is completely spent.

The trend reverses in upstate communities, with a current $10.4 million lift in the mid-Hudson Valley, $2.4 million in the Capital Region, $1.8 million in the Finger Lakes, $1.4 million in Western New York and about a $218,400 boost in the North Country, according to the institute’s analysis.

Workers are eligible for two tiers of benefits awarded by a point system after the person proves their residency and identity. To receive the top level of benefits, up to $15,600 pre-taxes, workers must have filed a tax return for 2018, 2019 and 2020 using a valid ITIN number.

Nearly all approved applicants have received the higher tier of benefits.

A letter from an employer showing dates of work or six weeks of pay stubs to prove residency can fulfill application requirements for either assistance amount.

The benefits are taxed at about 5%, or similar to federal unemployment insurance.

A person cannot have received unemployment insurance or federal COVID-related stimulus checks or aid, and cannot have earned more than $26,208 within the last year to be eligible for the funding.

New York’s Exclusive Workers Fund was the first of its kind in the nation. Officials from New Jersey, California and Iowa continue to evaluate New York’s fund as a potential model for programs in their states.

In April, advocates had estimated about 160,000 New Yorkers were eligible to apply for the fund.

7 ways to up your gift-giving game

Many Americans Begrudgingly Return To The Office Full Time; Most Expect Mandatory Vaccinations

Processing And Delivering The U.S. Mail