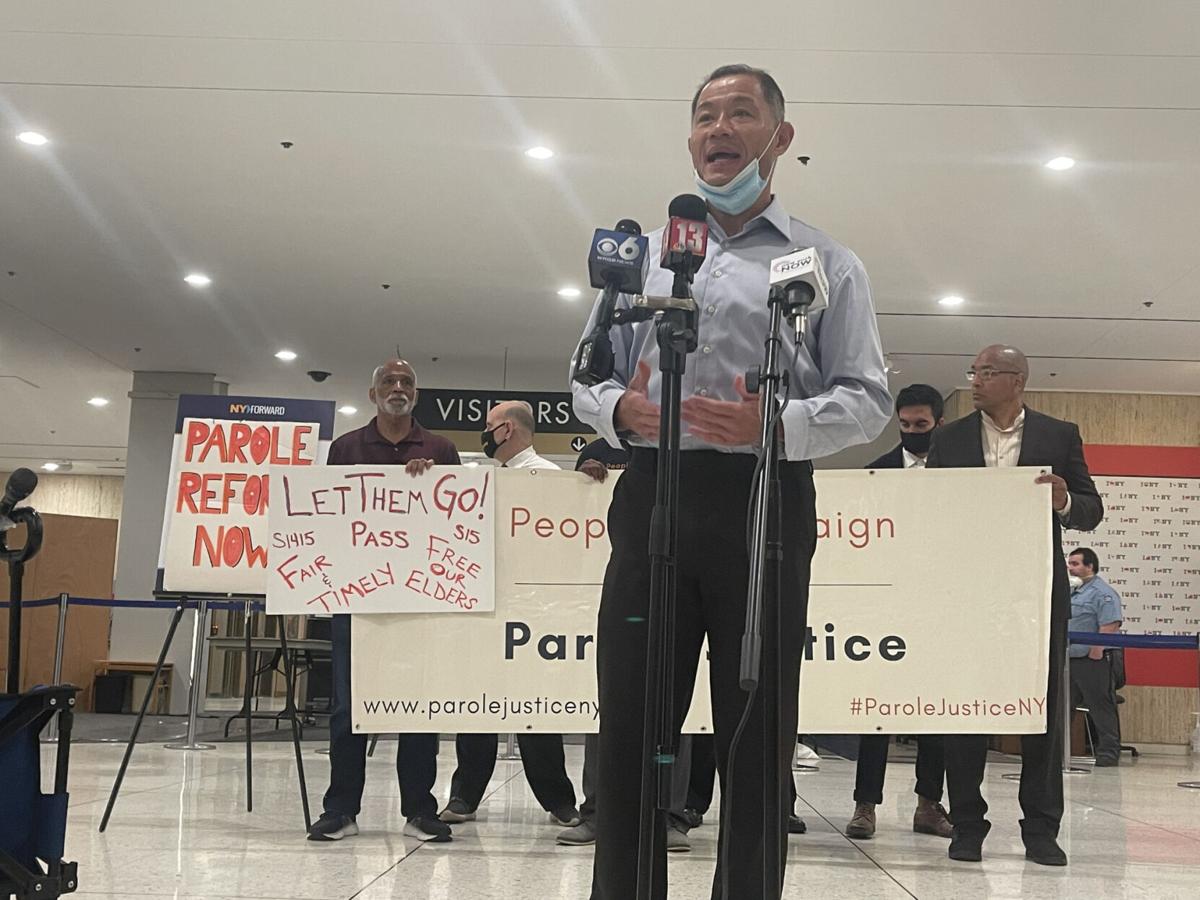 Sen. John Liu, D-Queens, speaks in the concourse near the entrance to the state Capitol in Albany on Monday morning in favor of moving Elder Parole and Fair & Timely Parole reform bills to the floor for the vote before session ends this week. Kate Lisa/Johnson Newspaper Corp. 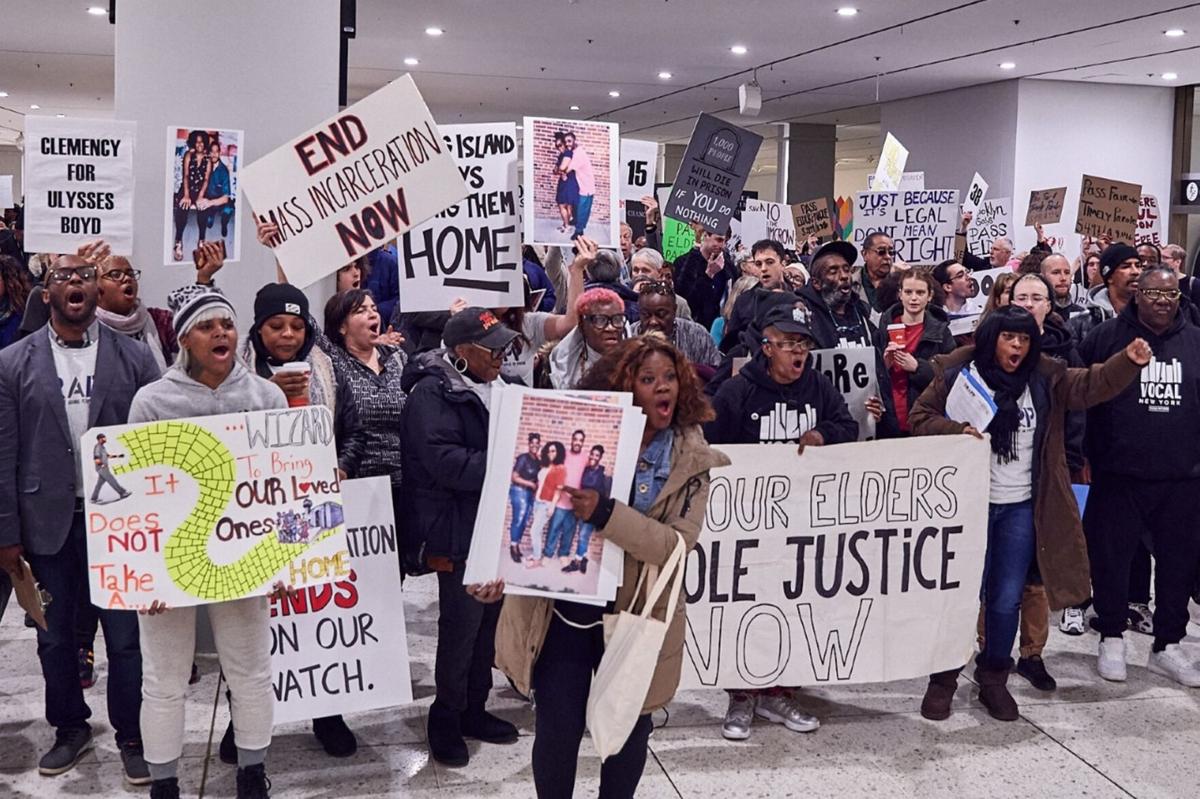 A crowd rallies for the Legislature to enact parole reform in the concourse of the Empire State Plaza outside the state Capitol in Albany in January 2020. Courtesy of Release Aging People in Prison Campaign 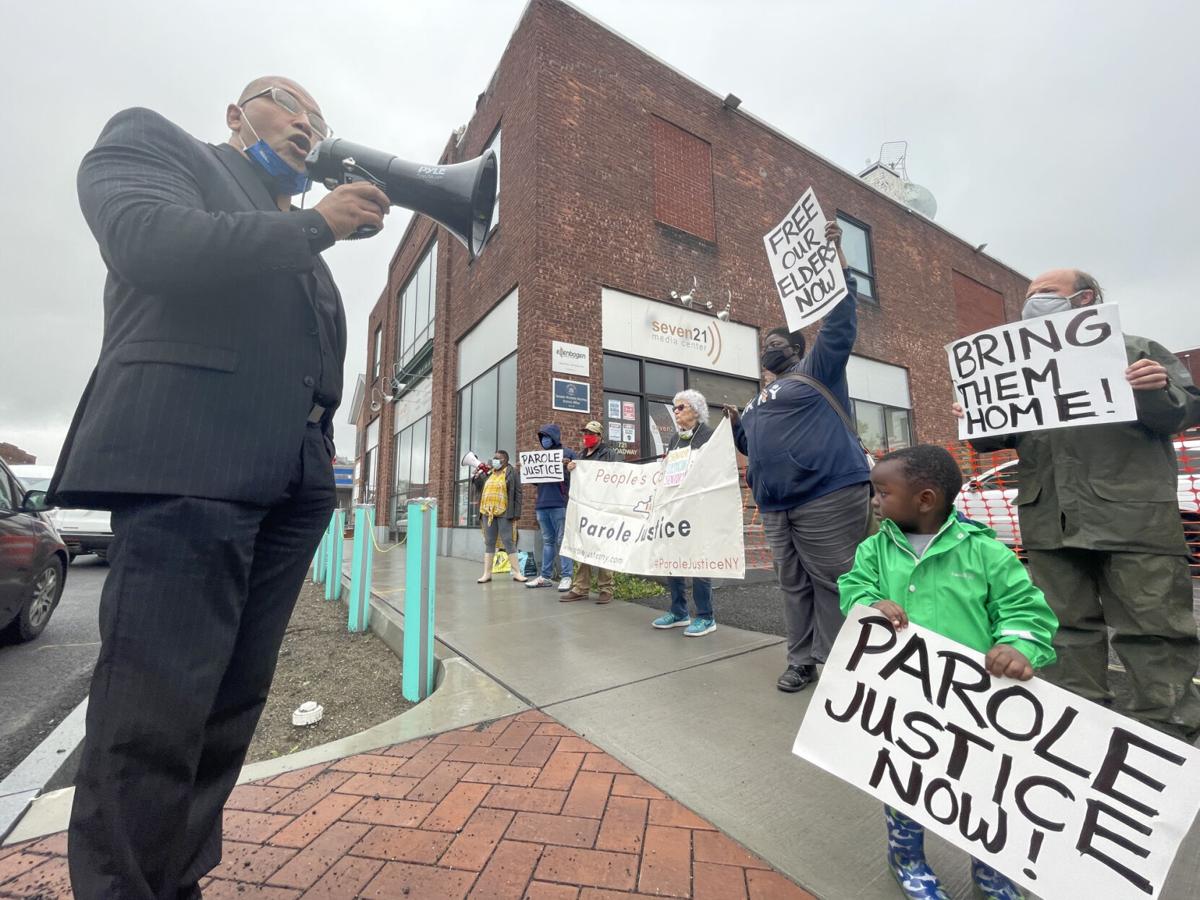 Anthony Dixon, director of community engagement of the Parole Preparation Project, speaks about his struggles to be granted parole and the need to reform the state’s system in Kingston on May 6. Kate Lisa/Johnson Newspaper Corp.

Sen. John Liu, D-Queens, speaks in the concourse near the entrance to the state Capitol in Albany on Monday morning in favor of moving Elder Parole and Fair & Timely Parole reform bills to the floor for the vote before session ends this week. Kate Lisa/Johnson Newspaper Corp.

A crowd rallies for the Legislature to enact parole reform in the concourse of the Empire State Plaza outside the state Capitol in Albany in January 2020. Courtesy of Release Aging People in Prison Campaign

Anthony Dixon, director of community engagement of the Parole Preparation Project, speaks about his struggles to be granted parole and the need to reform the state’s system in Kingston on May 6. Kate Lisa/Johnson Newspaper Corp.

Parole reform activists and formerly incarcerated people heightened their cries across the state this week, pleading with lawmakers to increase New Yorkers’ opportunities to be released from prison as this year’s legislative session draws to a close.

For rehabilitated, aging or sickly New Yorkers behind bars, parole reform is a matter of life and death, said Daryl Tolbert, a formerly incarcerated person who spent 31 years in state prison.

Tolbert, of Long Island, was convicted of murder in 1991.

“I know we live in a world with personal responsibility — I accept full responsibility for my previous actions,” he said. “I’m back on the street now, thanks to God. I’m not a menace to society. I’m looking to do the right thing.”

Tolbert recalled how, over time, he did the work to become a changed man. He appeared before the state Parole Board five times in more than three decades before his release. A person denied parole cannot typically reapply for two years.

“I had a meticulous disciplinary record and program history — that was not taken into account,” Tolbert said Friday during a virtual press conference to support proposed laws to reform the state’s parole system. “The only thing that was taken into account was a backwards focus on the crime.”

A broadening number of state lawmakers are throwing support behind two pieces of legislation to increase opportunities for incarcerated New Yorkers to be released from prison.

Elder Parole, S.15A/A.3475A, would require inmates over 55 years old who have served 15 or more consecutive years automatically be considered for parole regardless of their crime or sentence.

The Fair & Timely Parole Act, S.1415A/A.4231A, would mandate the state Parole Board release eligible incarcerated people unless the person presents a current and unreasonable risk, according to the bill, or a risk that cannot be mitigated by parole supervision.

Activists have rallied hard in favor of the legislation for several years, but intensified their calls with demonstrations in cities across the state this week before legislative session ends Thursday.

Assemblymember Carmen De La Rosa, D-Manhattan, sponsors Elder Parole and is one of more than 30 lawmakers to co-sponsor the Fair & Timely Parole Act.

“We’re hopeful that they will move forward ... but ‘hopeful’ is a better word than ‘confident,’” De La Rosa said Friday. “We only have a few days left. I think, as always, when we get to the end of session, it’s a fight against the clock. How many things can get done? Our biggest obstacle is time.”

Most people entering prisons and jails have experienced violence and abuse prior to incarceration.

Nearly 60% of people incarcerated in women’s prisons, and as many as 94% of certain women’s prison populations are survivors of violence, including sexual violence, intimate partner violence and child abuse, according to the American Civil Liberties Union and prisonpolicy.org.

A survivor of childhood physical abuse, Tolbert recounted how he entered prison with a fractured pelvis, but nearly died several times because he did not receive the proper medical attention while in prison.

“I was lucky to be released from prison when I did,” he said. “There are so many people I saw that were left for dead, and did die. There’s so many people I know who are still in there who won’t make it out.

“The longer we take, the more people will not see the street.”

De La Rosa does not anticipate changes to the Elder Parole bill to secure its passage, she said.

The assemblywoman met an incarcerated man with stage-4 cancer during a visit to Fishkill Correctional Facility in Beacon, Dutchess County, who has spent decades behind bars. Parole reform would assist New Yorkers like him, she said.

“He has no hope of ever being released — he should spend his last years with his family,” De La Rosa said. “Reforming parole returns hope for them. I see their eyes light up when we talk about Elder Parole.

“Someone who’s 80 years old who spent the entirety of their life in prison is not likely to re-offend, and we know those statistics,” she added. “They’re really looking for a sense of relief because they’ve transformed their lives.”

Elderly prisoners have the lowest recidivism rate of any age group, according to a recent study by the U.S. Department of Justice. Recidivism rates decrease as prisoners age – dropping to 5% for those ages 50 to 64 and dipping to less than 1% by age 65.

About 24% of people in state prisons, or nearly 1 in 4, are serving life or virtual life sentences.

The total incarcerated population in state correctional facilities is 31,890, as of Tuesday, with about 15% or 4,869 individuals aged 55 and older, according to the state Department of Corrections and Community Supervision.

Supporters of parole reform argue the state’s parole system is limited by external political pressures and riddled with inequities, which prevent incarcerated New Yorkers from release after serving their minimum prison sentences.

Gov. Andrew Cuomo was vague Wednesday in response to questions about his stance on the proposed measure.

“They’re apples and oranges,” Cuomo said during a briefing in Manhattan. “If you say ‘Here’s a template, and anyone who fits this template is off parole,’ that doesn’t allow you to look at the specifics and the specific risk that you’re taking. I think decisions on the merits are preferable, but again, it depends on what winds up in a final bill. You know as well as I that bills change until the last minute.”

Representatives with Cuomo’s office traditionally respond the administration “will review the bill” to requests for comment about proposed legislation.

Republican senators and assemblymembers each held events Tuesday warning New Yorkers about the potential for increased public safety threats if the Legislature passes the Elder and Fair & Timely Parole bills.

The minority pushed legislation Tuesday to restore judges’ discretion with respect to bail or requiring the state’s 19-member parole board to unanimously decide to release a person from prison. The board currently has three vacancies.

Assembly Minority Leader Will Barclay, R-Pulaski, noted in a statement Friday the proposed criminal justice reforms will exacerbate the state’s already exponential surge in violent crime in cities statewide. Incidents of violent crime have skyrocketed in cities nationwide over the last year.

“The near elimination of bail, limiting judicial discretion and a drastic overhaul of the parole system have undoubtedly scored the majority conferences plenty of political points, but it is clear the cost to our communities has been nothing shy of tragic,” Barclay said. “...Without immediate action from the Legislature, I fear this summer may be one of the most violent in recent history. Put bluntly, we simply cannot endure living in fear.”

“The bills don’t guarantee automatic release — they are granting the ability to come before the parole board and be judged on the basis of their transformation,” she explained. “No one is going to be automatically released and prove that transformation has occurred. Everyone is dignified to transform their lives. We call it ‘corrections’ for a reason.”

After release, formerly incarcerated people often speak of their mentors who helped them heal and change while behind bars, but they remain imprisoned.

“There is proof already that transformation is possible, and that is a type of system we should be aiming for,” De La Rosa said. “A system that restores, not a system that is punitive punishment through a person’s life.”

Fair & Timely Parole has been moved to the Senate floor to be placed on the calendar for a vote in the coming days. It was sent to the Assembly Codes Committee on Jan. 8.