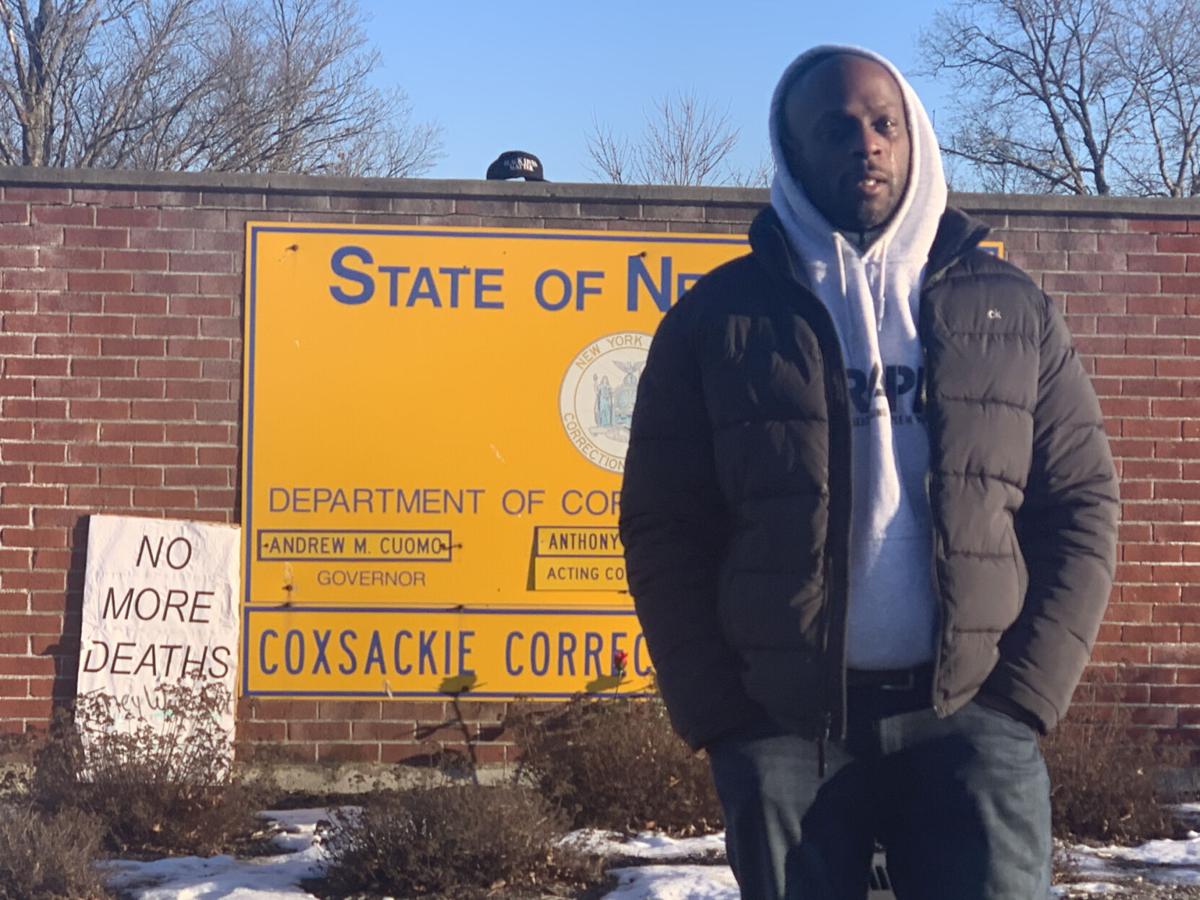 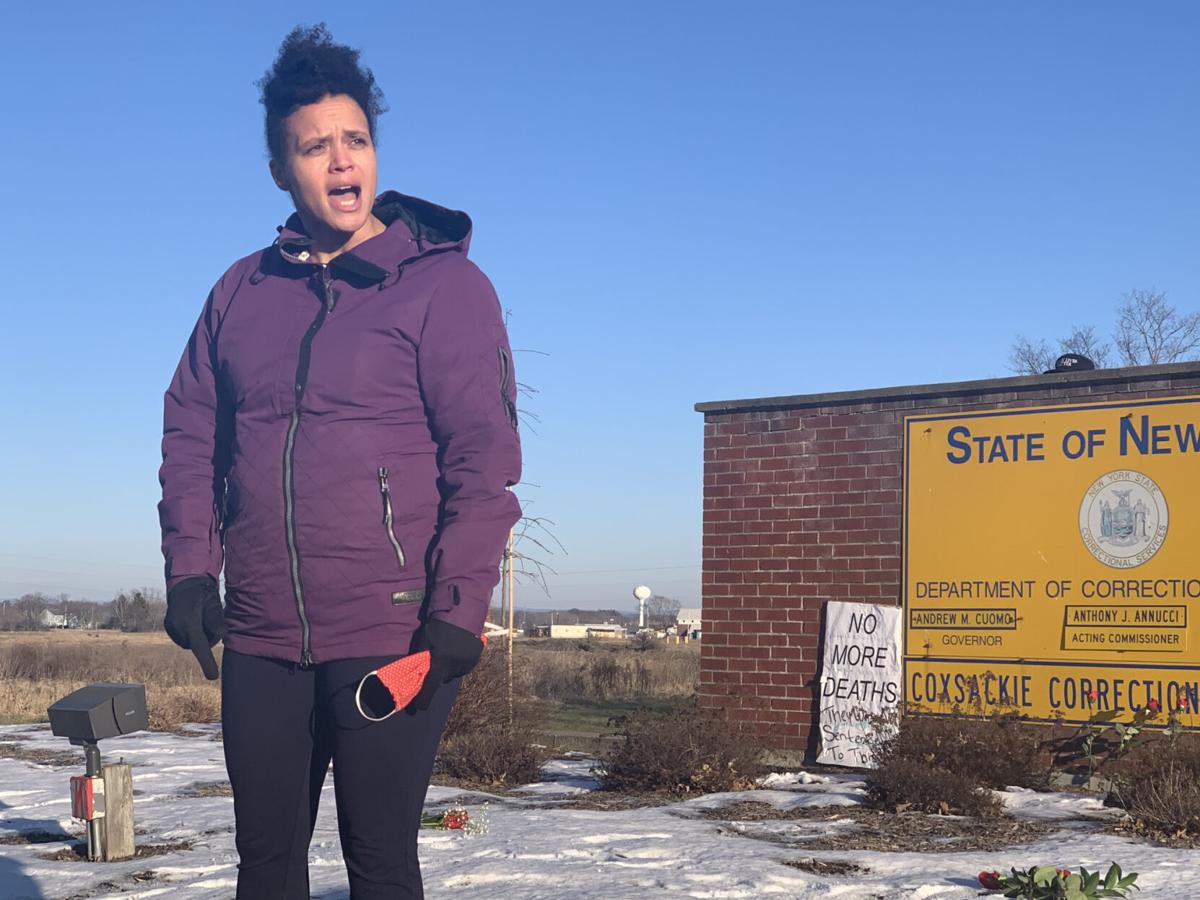 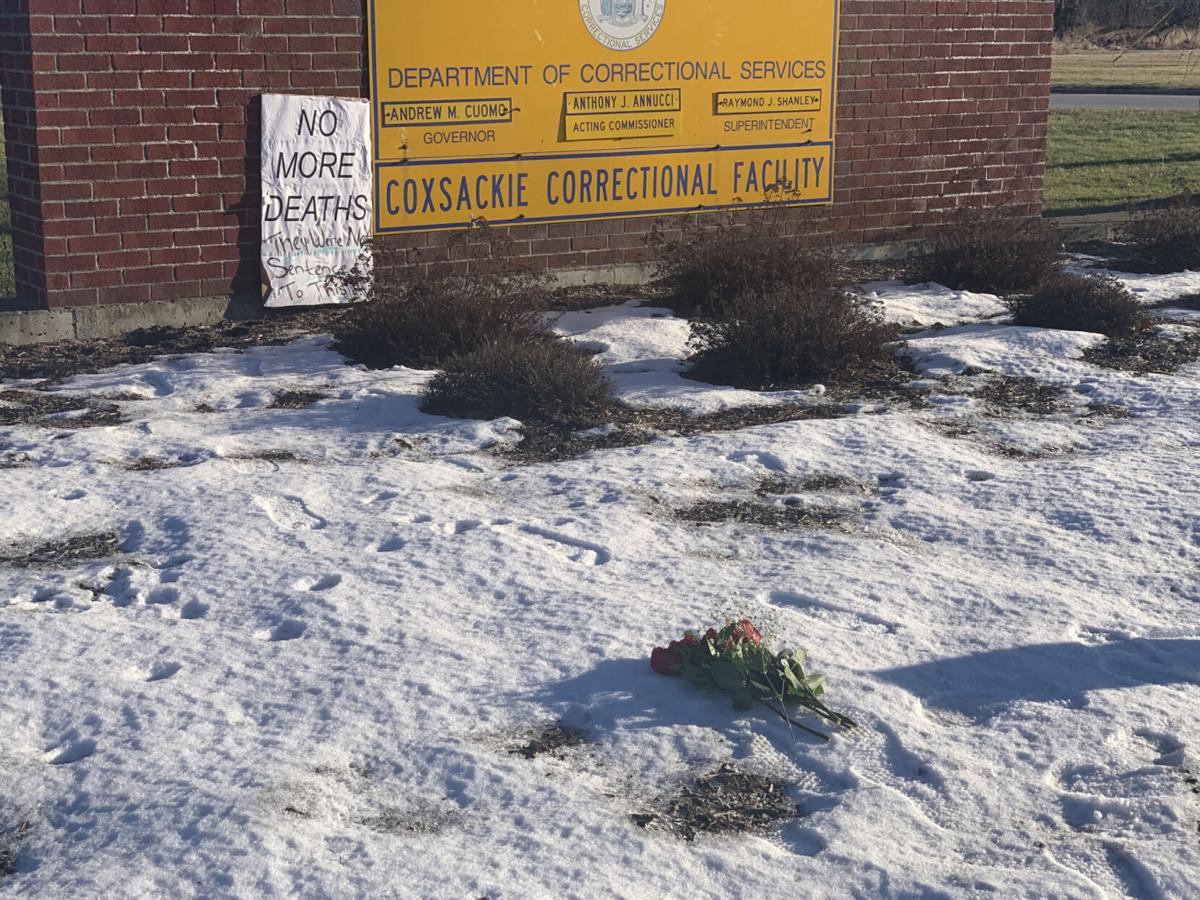 Activists and demonstrators laid roses, signs and other flowers in front of the sign at Coxsackie Correctional Facility on Sunday afternoon in honor of the three inmates who recently died inside the Route 9W prison from COVID-19 complications. Kate Lisa/Johnson Newspaper Corp. 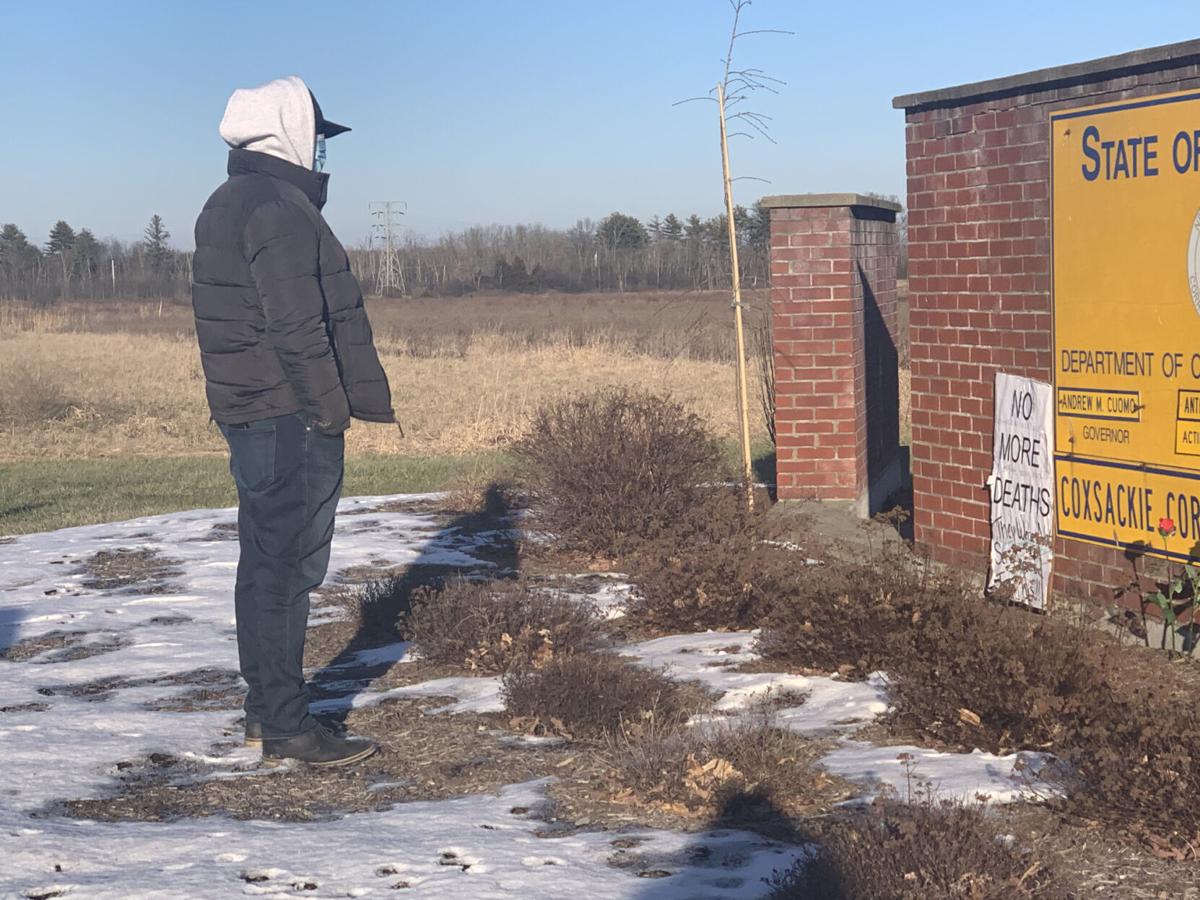 Activists and demonstrators laid roses, signs and other flowers in front of the sign at Coxsackie Correctional Facility on Sunday afternoon in honor of the three inmates who recently died inside the Route 9W prison from COVID-19 complications. Kate Lisa/Johnson Newspaper Corp.

COXSACKIE — Thomas Kearney grasped a few roses and approached the sign outside Coxsackie Correctional Facility on Sunday with his head bowed, as one-third of the state’s recent COVID-19 inmate deaths have taken place inside the male maximum-security prison since Dec. 30.

Kearney placed the flowers in the layer of snow blanketing the sleeping shrubbery in front of the Route 9W prison before standing in front of the sign for several minutes, offering a silent prayer in honor of the three inmates who died from COVID-19 at the facility in the last 12 days.

He knelt, taking a moment of silence, before placing a Black Lives Matter hat on top of the brick sign.

“The three lives that were lost here — they didn’t have to die,” Kearney said, beginning to weep.

Nine state inmates have died from complications of the novel coronavirus within the last six weeks.

Kearney let the tears fall outside Coxsackie Correctional on Sunday afternoon during a half-hour vigil. He was the last of five people to speak.

“We need the governor to exercise New York Tough,” Kearney said, playing on Gov. Andrew Cuomo’s state motto intended to rally New Yorkers through pandemic hardships. “Right now, it’s just a mantra. He needs to exercise New York Tough and decarcerate. Decarceration is the only answer for what’s happening now. It is the only thing that could have saved me from putting those three roses under that sign.”

About a dozen residents and activists participated from organizations including All of Us, Release Aging People in Prison campaign and others. Corrections officers changed shifts at the start of the vigil.

A man driving north on Route 9W past the demonstration continuously blared his car horn for several seconds, rolled down his window and thrust a raised middle finger at the group, nearly slowing to a stop on the 55 mph thoroughfare toward the beginning of Sunday’s event.

Twenty-seven inmates have died from COVID-19 complications to date, in addition to six corrections officers and staff and four parolees, with nine occurring in the last six weeks, according to the Department of Corrections and Community Supervision.

Other deaths include six at Fishkill Correctional Facility, three at Green Haven and four within Sing Sing.

Inmates died from COVID-19 on Dec. 30, 31 and Jan. 4 at Albany Medical Center, according to a statement Monday from the state Department of Corrections and Community Supervision. The department did not answer questions about where or from whom the outbreak can be traced.

County medical examiners are responsible for determining the deaths of incarcerated individuals in that county, including autopsy and any post-mortem testing. All deaths in DOCCS’ facilities are reviewed by the State Commission of Correction.

“The official cause of death will be determined and released by the Albany County Medical Examiner’s Office,” according to DOCCS, as officials wait for state coroners and medical examiners to determine the cause of death. “County Law §677 leaves it to coroners and medical examiners to determine if results will be released and to whom. Any death that appears other than natural causes or from a known medical condition is thoroughly investigated by New York State Police and DOCCS’ Office of Special Investigations. All deaths in DOCCS’ facilities are reviewed by the State Commission of Correction.”

Kearney, a formerly incarcerated New Yorker, served time inside Coxsackie Correctional and said Sunday the facility is one of the worst and racist facilities in the state’s prison system.

As of Saturday, 3,598 inmates of the estimated 36,000 incarcerated New Yorkers have tested positive for COVID-19 since the pandemic began, in addition to 3,470 total infected corrections officers and staff and 170 parolees. Of the confirmed cases among inmates, 2,876 have recovered, leaving 722 active cases of incarcerated New Yorkers still in quarantine.

DOCCS did not answer questions Monday about when families are notified when an inmate is confirmed infected with COVID-19, or how often family members are updated.

The state reported 2,222 pending COVID-19 test results in all state prisons Friday. An updated number was not available as of press time Monday afternoon.

DOCCS did not answer questions about how many inmates and corrections staff are tested for COVID-19 each day.

“In facilities that have had spikes of cases, the department has deployed rapid testing for staff,” according to a statement from DOCCS on Monday. “In addition, the Department is in the process of implementing a regular, voluntary staff testing program at each of its facilities statewide.”

Jolene’s husband, Bryon Russ, is originally from the Finger Lakes region and has been incarcerated on charges following two robberies for about 20 years. He remains in Sing Sing Prison in Ossining.

Russ often sees corrections officers without face masks or in violation of the state order.

DOCCS did not answer questions Monday about how many masks are given to inmates each week, the consequences for inmates and corrections staff violating the facial covering requirement or rate of violation.

“These [deaths] are personal to a lot of us,” Russ said of the nine inmates who recently died from COVID-19 while housed in state facilities. With visitation suspended because of the pandemic, relatives and friends have limited contact with incarcerated New Yorkers.

“There’s so little transparency in DOCCS that the only way to live and manage the system is to create your networks [of support],” Russ said Monday. “It’s difficult know who to trust. It’s hard to know what’s good information and bad information because these systems are bad systems.”

The department has worked with the state Health Department, following scientific guidelines through the pandemic, according to DOCCS. All incarcerated New Yorkers were tested for COVID-19 for several weeks through November.

“Every facet of the state’s response to the COVID-19 outbreak has been guided by facts, scientific data, and the guidance of public health experts at NYS DOH [Department of Health] and the CDC [Centers for Disease Control and Prevention], and the work of DOCCS to protect the safety of New York’s corrections staff and incarcerated population is no different,” according to a statement from DOCCS on Monday. “DOCCS is currently following all NYS DOH guidelines regarding congregate settings at each of its facilities.”

First responders, including police and corrections staff, are eligible to receive a COVID-19 vaccine.

“DOCCS is continuing to partner with DOH as part of the New York State COVID-19 Vaccination Program that was previously announced,” according to the department.

Cuomo’s top aides and representatives have pointed to the governor’s directives last spring that released 3,052 inmates from state prisons to reduce density and spread of the novel coronavirus including those incarcerated because of low-level parole violations, who committed non-violent or non-sex crimes and within 90 days of release, and 12 pregnant or postpartum women who committed non-violent, non-sex offenses within 180 days of approved release.

Prison beds were debunked to reduce inmate density in cells.

But activists say the efforts are not enough, as the governor has the power to grant clemency in the form of reprieves, commutations and pardons.

New COVID-19 infections occur most rapidly in large gatherings of people or congregate settings, such as nursing homes, adult-care facilities and prisons. Infections and deaths have increased across the state and nation since the fall, surging closer to upstate COVID rates when the pandemic first began last spring.

“We will continue to monitor the infection rates and resume visitation as soon as practical,” according to a statement posted on the state Department of Corrections and Community Supervision website. “We recognize that visitation is a vital part of family reunification and therefore, we will resume it when safe to do so.”

Advocates have protested multiple times through the spring, summer and fall 2020, including at Elmira Correctional Facility in Chemung County and outside Cuomo’s Manhattan office and the state Capitol and Governor’s Mansion in Albany.

“These are human beings,” said Jamaica Miles, co-founder of All of Us Community Action founded in February 2020. “We can’t simply continue to dispose of them. As a woman of faith, I could not stand by and allow there to be murder of people in a land that says it stands in the ideals of liberty, justice and freedoms for all when it locks people in cages.”

“It’s necessary we call for changes from DOCCS and the New York state Legislature and from those working inside these facilities right now,” Miles said. “There is no death penalty in New York state. Gov. Cuomo and DOCCS have, effectively, reinstated the death penalty.”

Due to the increase in COVID-19 cases both inside and outside DOCCS’ correctional facilities, intake of state-ready individuals from county jails was temporarily suspended starting Dec. 14. This suspension was extended another 30 days Jan. 8, 2021, and will be reviewed in 30 days.

“Movement within the system has been slowed as well,” DOCCS said of inmate transfers.

DOCCS will require all visitors to have proof of a negative COVID-19 test from within the last seven days when visitation resumes, according to the governor’s office.

*Editor's note: This story corrects an earlier version that misidentified All of Us Community Action as a part of Citizen Action. All Of Us is a separate organization co-founded in February 2020 by Jamaica Miles and Shawn Young.

Advocacy Groups for Criminal Rights and Safety,..lol.. More proof that this country is going down the tubes.....Thank a Democrat....Sadly, more insanity is coming

Sorry but I couldn't disagree more

Just what we need more criminal out on the streets. There are enough degenerates out here now with the bail reform. Keep the heathens behind bars! They were sent there because of the crimes they committed.

Oh boo hoo hoo. The poor criminals in a MAXIMUM security prison, which they are currently in because they committed a crime deserving to be put in such a place, are catching covid, and some dying, like the rest of the population is. That must mean that we should decarcerate them. Yeah, ok guy.

Why don't you just save us all the stage worthy dramatics, collect your Emmy and move along.

So it looks like you are against decarceration? If so, I am shocked. I have to agree with you again!!