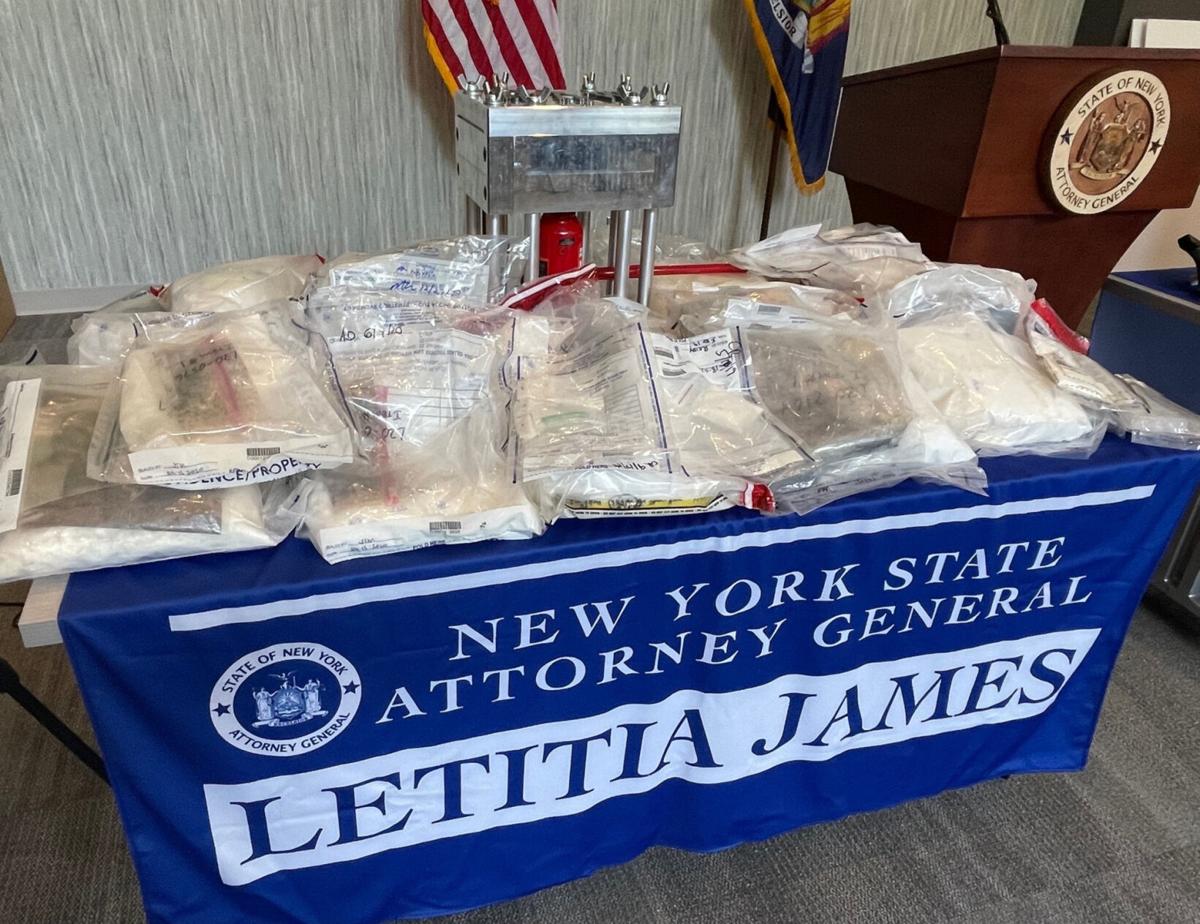 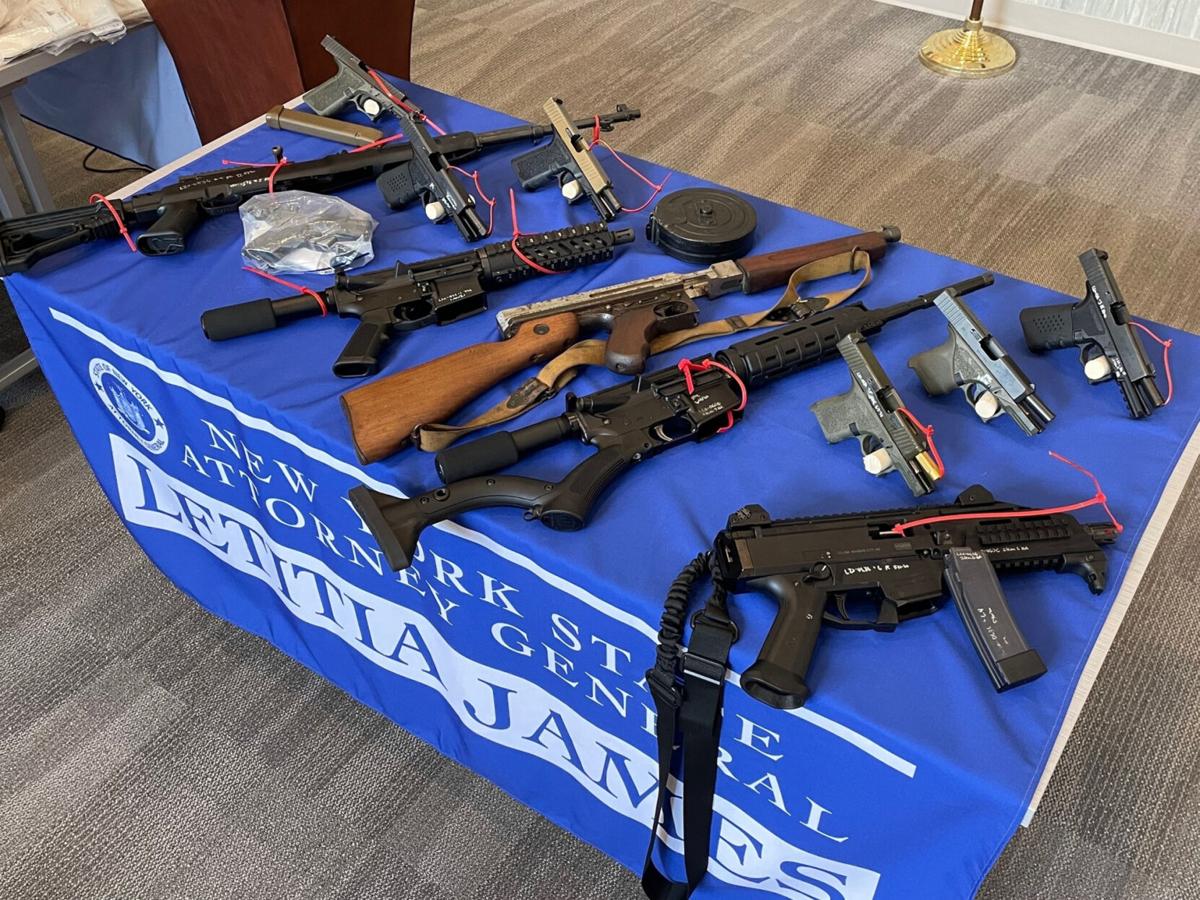 The attorney general’s office and police seized about 32 kilograms of cocaine, 117 grams of heroin mixed with fentanyl, more than $490,000, and 15 firearms, including nine ghost guns as part of a two-year investigation. In total, the seizures have an estimated street value of up to $2 million.

The probe resulted in four separate indictments unsealed in Onondaga County Court on Wednesday charging 78 individuals with 355 criminal counts related to the narcotics trafficking operation, including operating as a major trafficker, a class A felony; criminal sale and criminal possession of a controlled substance, class A, B and C felonies; and conspiracy to commit those crimes, a class B felony.

“This is a message for anyone who wants to engage in the illegal trafficking of drugs or guns,” James said Wednesday afternoon at the Syracuse Regional Office. “I’m not gonna stop. If you want to continue to sell this poison ... my partners in law enforcement, we will come after you.

“It is a critical step in our efforts to stop violent crime. I will continue to do so as long as I am the attorney general for the great state of New York.”

The 78 accused range in age from 23 to 62 years old and largely hail from Onondaga County, but also reside in Madison, Chemung, Oswego, Westchester, Cortland, Monroe and Bronx counties. Three are from Florida.

The indictments outline the activity of the “Pupello Group,” led by Michael Pupello, 33, of Madison County, and charges 25 individuals for their roles in selling primarily cocaine in Onondaga, Madison, and Oswego counties tied to other area drug rings, which investigators discovered during wiretapping.

The accused frequently used coded and cryptic terminology to disguise their illicit activities, such as referring to ounces of cocaine as “onions” or “zips” and 3.5-gram narcotics transactions as “balls,” short for “8 balls,” or one-eighth ounce quantities of cocaine.

“Our neighborhoods have been terrorized by drugs and guns,” Syracuse Mayor Ben Walsh said Wednesday before profusely thanking the law enforcement agencies involved in the two-year probe. “We’ve been waiting a long time for this. This is the result of intentional and consistent partnership across every level of government. It shows what we are capable of when we set aside our differences and we work together for a common cause and common good.”

The second indictment details the alleged crimes of the “Flores Group” led by Hector Flores, aka “Pito” and 50 others selling narcotics in Onondaga, Oswego, Oneida, Cortland, Westchester, New York and Bronx counties.

Flores, 41, of Onondaga County, is charged with operating as a major trafficker, which carries a mandatory life sentence in state prison.

Flores is accused of coordinating the shipments of nearly a dozen kilograms of cocaine through the mail from Puerto Rico to addresses in Onondaga County, which were later intercepted by the U.S. Postal Service, according to James’s office.

The third and fourth indictments are centered on men from Florida, Puerto Rico and Rochester who oversaw the transport of multiple kilograms of cocaine across state lines to New York City and Syracuse and Onondaga County.

“This is a model for teamwork,” Madison County Sheriff Todd Hood said Wednesday of the 13-agency investigation. “When they did the raid this morning ... there were hundreds of cops who came together from all over the state. They got out there and they got after these people. The streets of Central New York, the streets of New York City all the way down to central Florida will be safer because these people are off the streets.”

The multi-agency investigation — dubbed Operation Raw Materials — between the Office of the Attorney General’s Organized Crime Task Force and the Oneida/Madison County Drug Task Force fused the resources of more than a dozen local, state and federal law enforcement agencies.

The attorney general announced the indictment of 47 Capital Region residents June 24 in connection with two major area drug and gun trafficking rings during a press conference at the state Capitol in Albany.

Some officials have hinted James, a Democrat, is seeking to run for governor in the November 2022 election. The attorney general has repeatedly declined to discuss political questions at recent public events, including her intent to seek re-election.

James on Wednesday also declined to provide details or a timeline in several ongoing investigations into Gov. Andrew Cuomo and his administration concurrently taking place within several levels of government.

Cuomo remains under multiple investigations by federal prosecutors, James’s office and an impeachment probe in the state Assembly for executive aides allegedly underreporting COVID-19 deaths in nursing homes and congregate care facilities and allegations of sexual harassment or misconduct by at least nine women. The Legislature’s investigation also includes examining if the governor used state resources to publish his pandemic memoir, for which he received $5.1 million; Cuomo giving priority COVID-19 testing to family members and close political allies when coronavirus testing was scarce in early 2020 and the safety of the Gov. Mario Cuomo bridge completed in 2017.

The governor has repeatedly denied any wrongdoing.

Wednesday’s Central New York indictments mark the latest major drug bust in the attorney general’s office’s Suburban and Upstate Response to the Growing Epidemic Initiative, which connects state and local law enforcement to target the state’s growing and often violent heroin, opioid and narcotics trafficking networks. The initiative has taken 722 alleged traffickers off the streets since its inception in 2017, according to the attorney general’s office.