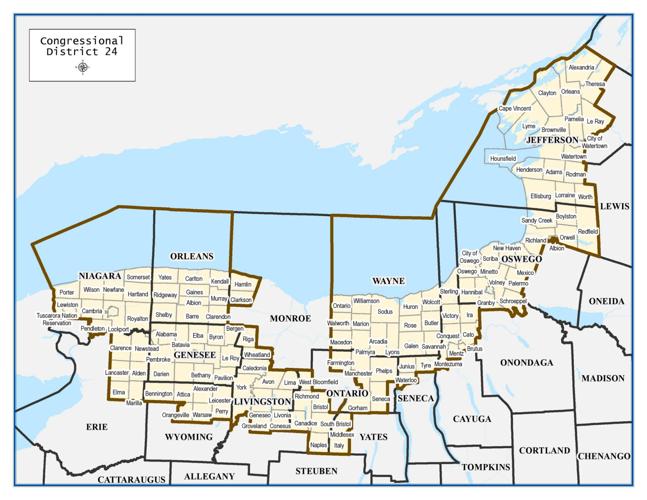 The new boundaries of the 24th congressional District drawn by the state Legislature, which would become the lines of the Finger Lakes’ congressional district for the next decade if signed into law this week. 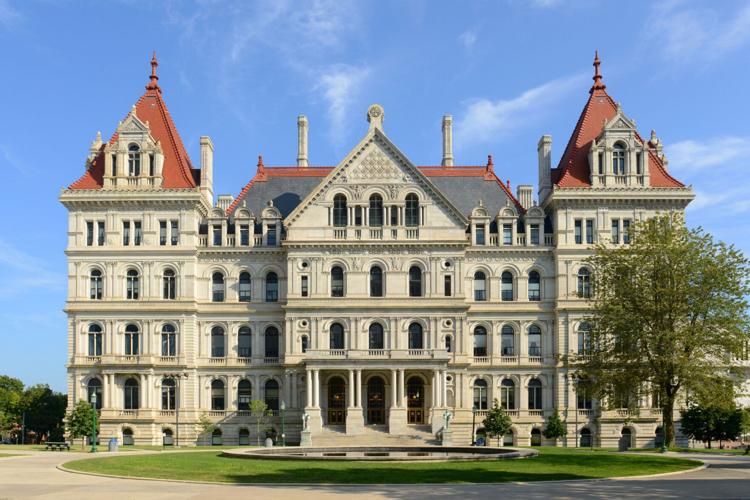 The new boundaries of the 24th congressional District drawn by the state Legislature, which would become the lines of the Finger Lakes’ congressional district for the next decade if signed into law this week.

The Legislative Task Force on Demographic Research and Reapportionment is finalizing the Legislature’s drawing of new elective boundaries for 26 seats in the U.S. House of Representatives, 63 senators and 150 assemblymembers after members of the Independent Redistricting Commission failed to reach a consensus on their final attempt to submit a joint plan.

Under the new plan, the boundaries of New York’s proposed 24th Congressional District, with the town of Alexandria, Jefferson County, at its easternmost border, would stretch to include almost all of Oswego County, northern Cayuga and Seneca counties, Wayne County, nearly all of Ontario County, the western side of Yates County, a southwestern corner and northwestern square of Monroe County, northern Wyoming County, Livingston, Orleans and Genesee counties, eastern Erie County and all of Niagara County, to the Niagara River at the state’s western border.

U.S. Rep. Chris Jacobs, an Orchard Park Republican, plans to run for re-election in the newly drawn 24th District, a heavily Republican enclave that would meander from the northernmost shores of the Niagara River to the Thousand Islands region — a driving distance of 256 miles — while bypassing most of metro Rochester.

“Serving the people of Western New York for the past two years in the House of Representatives has been the honor of my life,” Jacobs said in a statement. “We have made great progress, but this upcoming election is paramount to the future of our nation.”

The 27th District was renumbered the 24th under the new maps and would swell to 776,971 people from 717,307, with 618,164 eligible voters. The proposed new election district contains all or part of eight counties Jacobs currently represents, and more than 400,000 of his constituents are in the new boundaries.

Jacobs, who moved to Orchard Park two years ago to run in a district vacated by former Rep. Chris Collins, would have to move again to run in the 24th district because Orchard Park is in the district to the south.

The bill will be taken up by the Senate Rules Committee and Assembly Governmental Operations Committee this week and is expected to be brought to the floor for a vote and sent to Gov. Kathy Hochul to sign into law within days.

“Ensuring fair representation for New Yorkers is important,” Hochul said Tuesday on the redistricting process during an unrelated press conference in the Bronx.

Candidates are eager to start campaigning in early March for the scheduled June 28 primary, for which the new lines must be in place for. The map revision process must proceed rapidly so candidates and voters alike know their elective districts, the governor said.

The district is apt to remain a Republican stronghold under the new lines, with about 60% voting for former President Donald Trump in 2020, according to New York data from Redistricting & You.

Jacobs had $334,154 in cash on hand at the end of September, but will likely have to raise considerably more to run television ads in a district that now spans the Buffalo, Rochester and Syracuse television markets.

“The challenges our country faces are many and they are deeply consequential, but we are more than equipped to face them and emerge more prosperous,” Jacobs said. “The coming elections are a chance for conservatives to elect majorities in Congress who will check the Biden administration’s disastrous policies, reimplement the successful policies of the [President Donald] Trump administration and put our country on a solid foundation once again. I am committed to fighting for your constitutional rights, your economic prosperity, and our future — just as I have for the past two years.”

Republican leaders and good-government groups have been outraged by the Democrats’ attempts to control the redistricting process rife with gerrymandering, they’ve said.

“Instead of ensuring that the public has a say in what their future districts will look like, the Legislature has instead disrespected the process put in place by voters in 2014 by planning to steamroll redistricting legislation through the Assembly and Senate,” according to a statement from the state League of Women Voters on Tuesday. “New Yorkers deserve a transparent and fair redistricting process, and it is shameful that the Legislature has denied them this.

“The League of Women Voters of NYS believes that voters should choose their representatives, not that representatives should choose their voters,” the league added. “Partisan gerrymandering is banned under the state constitutional amendment passed in 2014, yet the maps released on the 31st and the first reflect a Legislature that appears to care more about favoring partisan interests than it does for fair maps.”

The Legislature created mind-bending shapes to implement new Senate districts in Brooklyn and Queens as examples, but gerrymandering is nearly impossible to prove in court.

Redistricting expert Jeffrey M. Wice, adjunct professor and senior fellow at New York Law School, said gerrymandering has occurred in legislative redistricting processes since the inception of drawing election lines. In a PoliticsNY column Thursday. Wice cited several redistricting cases — including the 2012 challenge over the Senate, and FAIR v. Weprin and Wolpoff v. Cuomo in 1992 — all dismissed in court.

“No New York state court has rejected a state legislatively enacted map in well over 50 years,” Wice said Tuesday. “The Legislature is challenged with a balancing act.”

“Since then, no plan has been struck down by a court,” Wice said. “You’ve had population equality and partisan gerrymandering challenges filed in federal and state courts and they’ve all failed, repeatedly.”

Challenges to the maps would also extend well into 2023, or after the lines have already been in place for the November general election.

Any person to challenge the plans must file a case in state Supreme Court, which will have two months to hear the case.

Appeals to the decision would be filed in the state Appellate Court Division, which would take several weeks, or months, followed by additional months waiting on the Court of Appeals.

Jacobs has represented the state’s 27th District since 2020, serving as state senator for part of Buffalo and its surrounding towns before then.

Jacobs has been a strong conservative member of the House Agriculture Committee and the House Budget Committee during his time in Congress, sponsoring legislation that opposes rules made by Biden’s administration and supporting pro-police, pro-Second Amendment and anti-abortion legislation.

Jacobs was also one of the 147 Republicans who voted to exclude the Presidential election results in Arizona and Pennsylvania on Jan. 6, 2021.

Alex Gault and Tribune News Service contributed to this report.

Cooking tips, fun recipes and easy ways to give back this holiday season

Pair Soup and Sandwich for a Warming Winter Meal