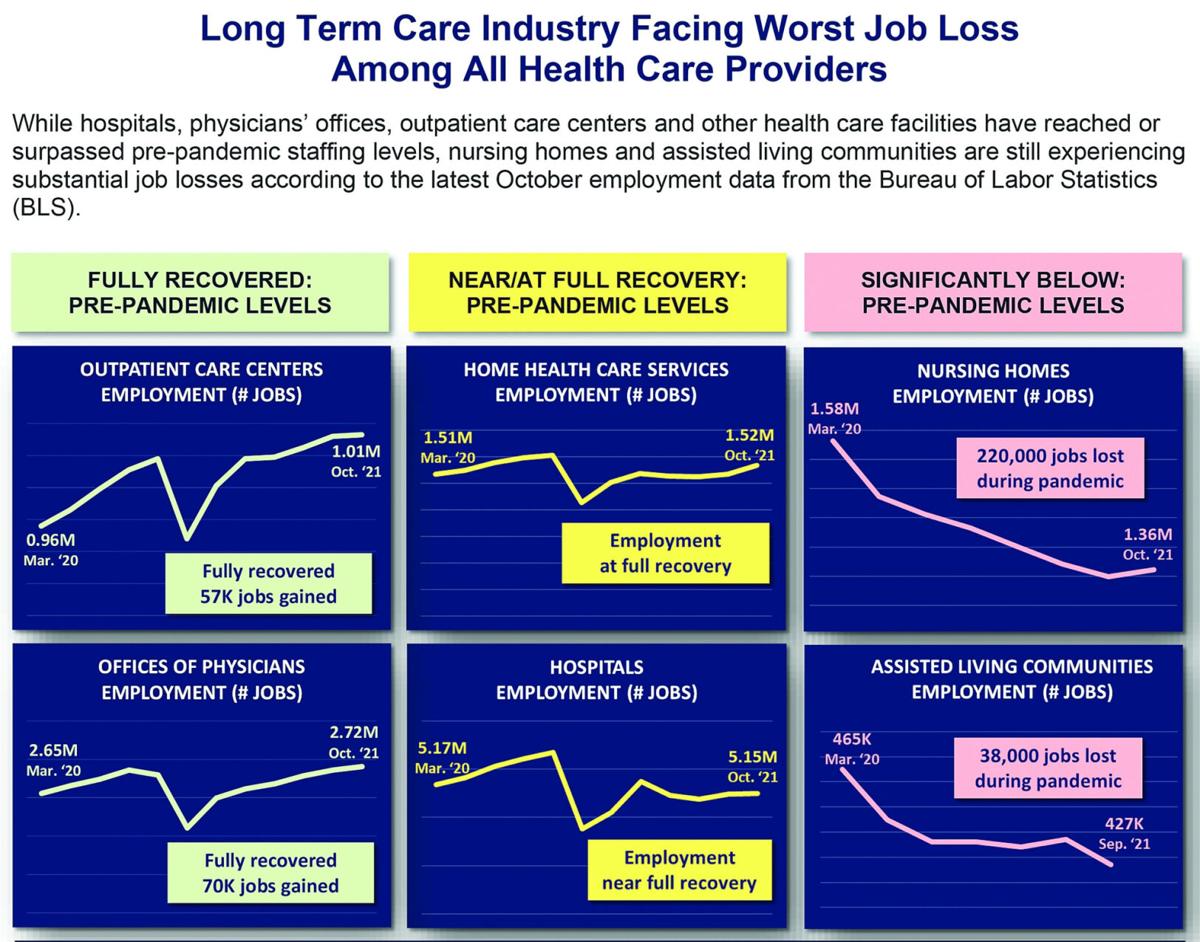 Nursing homes and assisted living facilities across the nation have lost more than 250,000 employees since the onset of the COVID-19 pandemic in March 2020, according to a report released this week.

Long-term care facilities continue to suffer the worst labor crisis and job losses than any other health care sector, with 220,000 U.S. nursing home jobs lost during the pandemic, down to 1.36 million from 1.58 million in March 2020 — a decline of 14%, according to a report released Wednesday from the American Health Care Association and National Center for Assisted Living.

Employment opportunities at assisted living communities nationwide have declined by at least 38,000 since the pandemic began, down to about 427,000 jobs from 465,000.

“As many caregivers are getting burned out by the pandemic, workers are leaving the field for jobs in other health care settings or other industries altogether,” AHCA/NCAL President & CEO Mark Parkinson said in a prepared statement about the workforce challenges. “Chronic Medicaid underfunding, combined with the billions of dollars providers have spent to fight the pandemic, have left long-term care providers struggling to compete for qualified staff. We desperately need the help of policymakers to attract and retain more caregivers, so that our nation’s most vulnerable have access to the long-term care they need.”

Roughly 58 percent of nursing homes limiting new admissions due to shortages, according to the AHCA/NCAL, which represents more than 14,000 nursing homes and adult-care facilities.

Gwen Alleva, administrative assistant at The Pines Nursing and Rehabilitation Center in Catskill, said Friday she could not speak to the media and referred questions to administrator Kathy Roop, who was out Friday.

Jessica, a human resources representative at Ghent Assisted Living who declined to give her last name, said Friday staffing continues to be an issue at the Columbia County facility on Whittier Way.

The facility has openings for at least three positions and about 40 people on staff, Jessica said.

“We’re looking for per diem and part-time right now,” she added.

Facility staffing was not much of an issue prior to the pandemic, Jessica said.

More than 7 out of 10 nursing homes and assisted living communities surveyed by the association this fall cited a lack of qualified candidates and unemployment benefits as the biggest obstacles in hiring new staff.

“As the regulator of nursing homes and adult care facilities in New York state, the department does not hire or recruit staff for private or county-owned nursing homes,” Health Department spokesperson Jill Montag said in a statement Friday.

Outpatient care centers gained roughly 57,000 jobs and 70,000 jobs in physicians’ offices, according to the Labor Bureau.

“Too many facilities are struggling to hire and retain staff that are needed to serve millions of vulnerable residents,” Parkinson said.

About 78% of nursing homes and 61% of assisted living communities responded in the recent survey that concerned workforce challenges might force them to close,

The association continues to pressure federal officials and Congress to take action to address the staffing shortages and ease the burden on adult-care facilities nationwide.

“Lawmakers across the country must prioritize long term care and that begins with providing resources to address workforce challenges,” Parkinson said in a prepared statement about the staffing shortages in late September. When facilities have the means to offer competitive wages and training programs, workers will follow. We have laid out key proposals in our Care for Our Seniors Act, which will allow us to boost our workforce, but without the help from Congress and state legislators, this will not be possible.”

Multiple calls to administrators at Greene Meadows Nursing and Rehabilitation Center, Home Sweet Home on the Hudson, The Eliot — all in Catskill — and Home Sweet Home at Athens were not returned Friday.