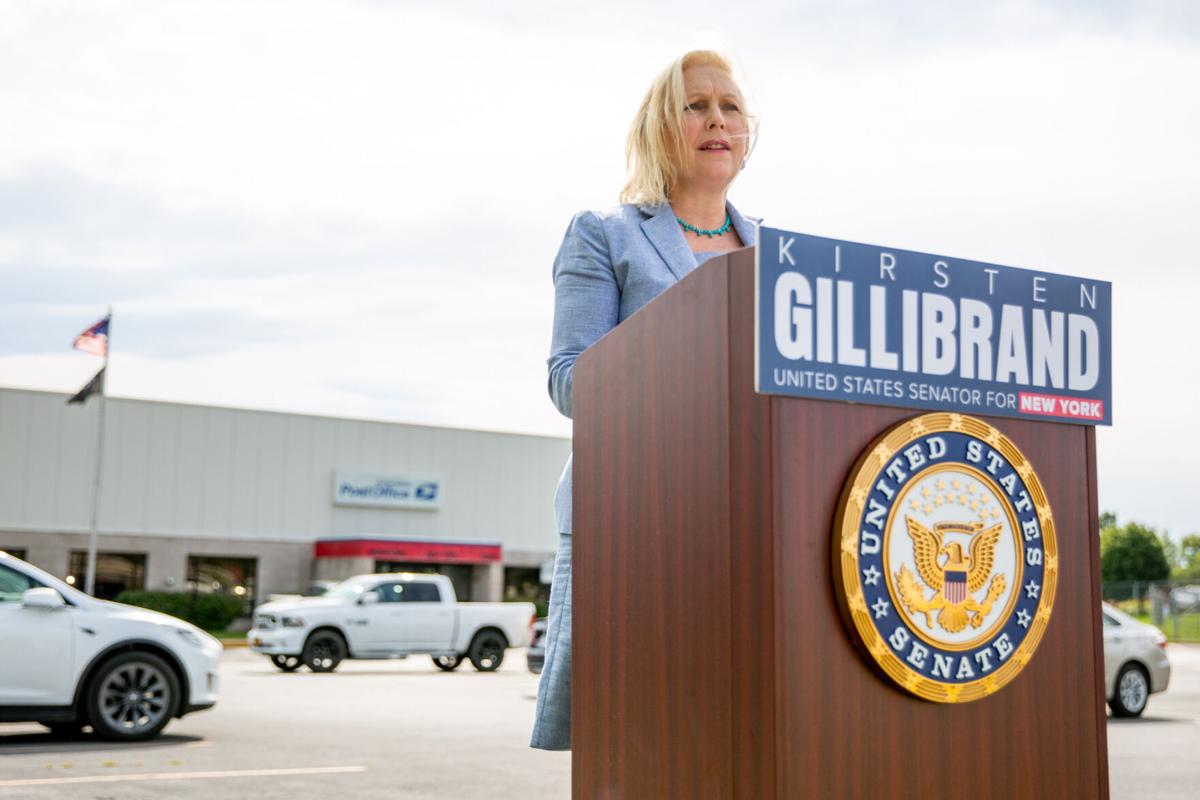 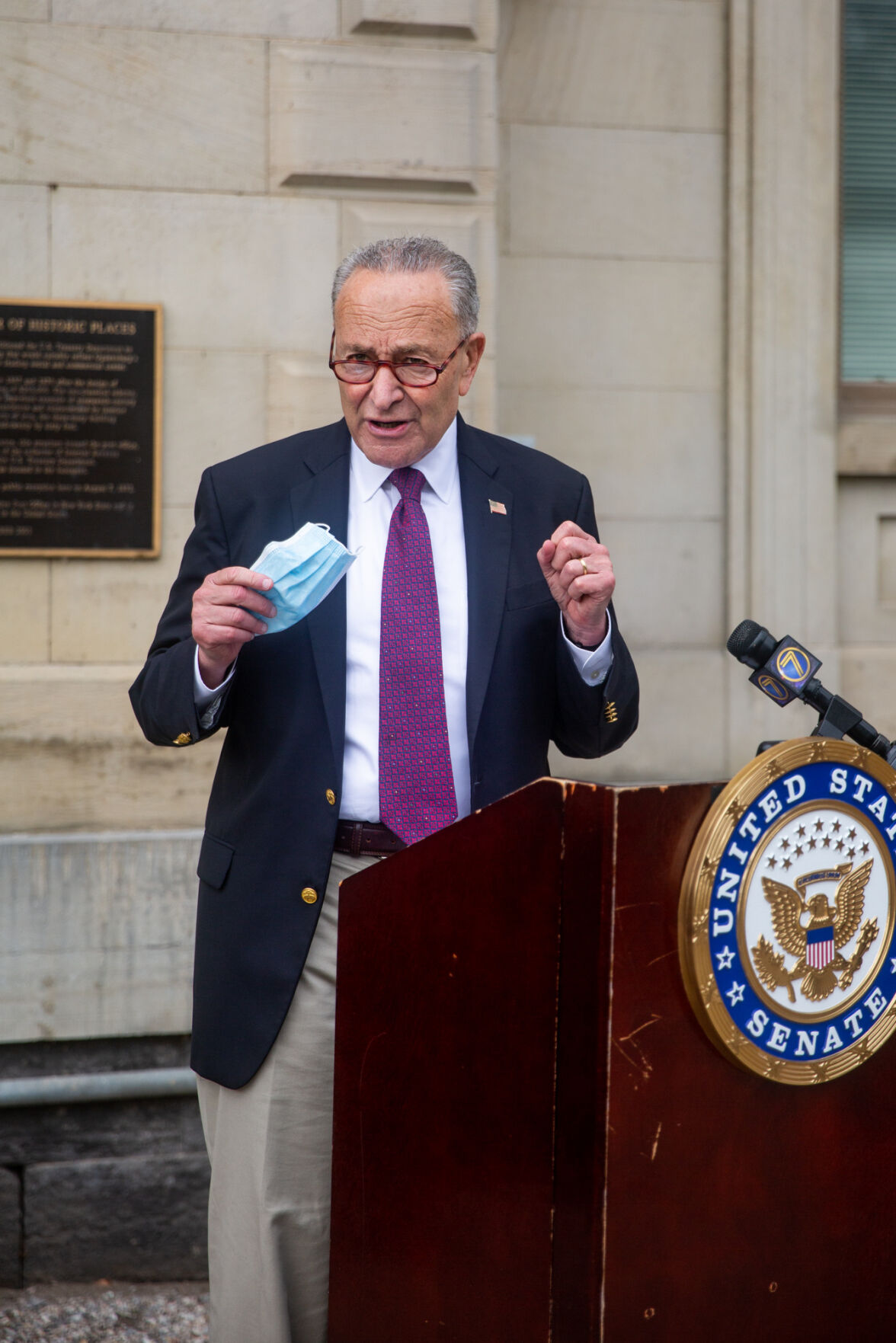 In front of the Ogdensburg U.S. Post Office, U.S. Sen. Charles E. Schumer addresses recent budgetary cuts to the U.S. Postal Service on Aug. 21 while proposing new legislation which he hopes will ensure adequate functionality of the public service ahead of the November presidential election and as the COVID-19 pandemic continues. Kara Dry/Watertown Daily Times

In front of the Ogdensburg U.S. Post Office, U.S. Sen. Charles E. Schumer addresses recent budgetary cuts to the U.S. Postal Service on Aug. 21 while proposing new legislation which he hopes will ensure adequate functionality of the public service ahead of the November presidential election and as the COVID-19 pandemic continues. Kara Dry/Watertown Daily Times

As the pandemic has forced businesses, especially small businesses, to close their storefronts and operate mostly by mail, shipping and delivery delays have eaten into profit margins and jeopardized swaths of the upstate economy, Gillibrand and Schumer said.

“Upstate New York’s small businesses have been hard-hit by the pandemic and Postmaster DeJoy’s backwards policies, resulting in issues and delays with shipping and delivery, are making it even harder for them to stay afloat,” Schumer said in a statement. “New York’s small businesses continue to lose customers and precious income, while being forced to consider higher cost shipping options because of the changes to USPS policy and operations. This cannot continue.”

Both senators placed the blame for the slowdown squarely on DeJoy, and said his operational changes have borne nothing but reduced service quality and have had particularly negative impacts on small businesses.

Seventy percent of businesses with fewer than 10 employees chose to use the USPS for most of their package service needs in 2019, largely due to its inexpensive and reliable services, according to the statement.

“I demand DeJoy address the impacts of his disastrous operational changes and reverse course to help the small business community recover,” she added.

Since taking office in mid-June, DeJoy has overseen a litany of changes to the USPS’s operating guidelines and procedures. During his tenure, overtime and extra trips for mail carriers to deliver late mail have been banned, letter sorting machines have been disconnected and postal drop boxes have been removed or locked.

While DeJoy said during congressional hearings that many of these changes were slated to go into effect before he took control of the service, leaked internal documents show the changes came right as DeJoy took office.

In a statement sent Aug. 18, DeJoy said he would suspend any changes to the USPS’s operations until after the Nov. 3 election. In their letter, the senators asked DeJoy to specify which specific initiatives he would suspend.

The senators’ letter criticized DeJoy for what they termed a “lack of transparency” over exactly what changes he has made.

“We were initially relieved to hear that the Postal Service will be suspending some of these changes,” according to the letter. “It now appears, however, that your statements are misleading.”

The letter details how, during a House Oversight and Reform Committee hearing, DeJoy said he had not directed the removal of any mail-sorting machinery. In a Senate Homeland Security and Governmental Affairs committee hearing, DeJoy testified there’s no plan for the USPS to bring any sorting machinery back online. The senators said these statements conflict with one another, creating confusion over what exactly is happening at the USPS.

“We are concerned by your continued lack of transparency regarding which specific initiatives the Postal Service has suspended, and what that actually means, and the potential for continued harm to America’s small businesses,” according to the letter.

The senators requested DeJoy answer a series of questions about how he has analyzed the USPS’s services and customer base, and if he ever considered the effects the changes would have on small businesses.

“Please provide a list of any changes you have instituted at the Postal Service during your tenure, the status of each change, and whether each change will be suspended until after the election,” according to the letter.