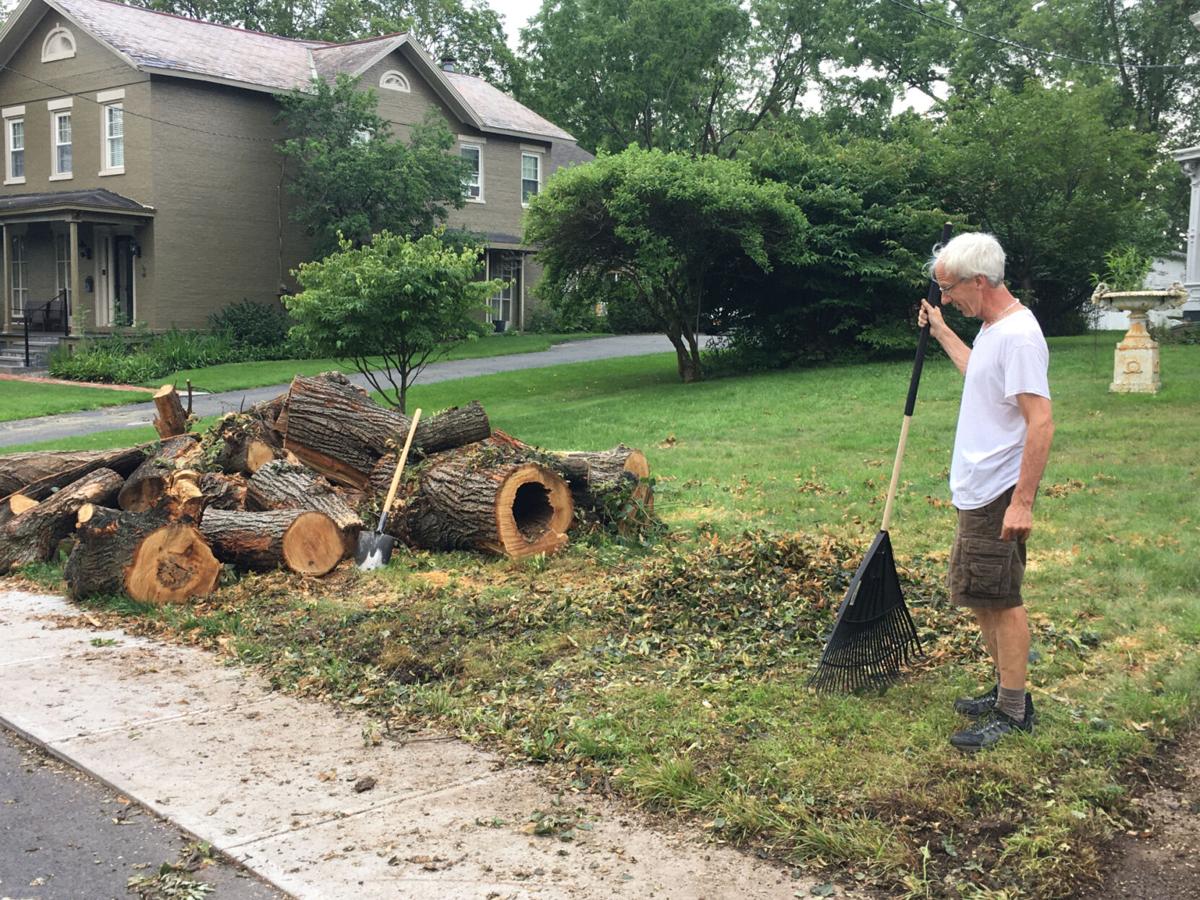 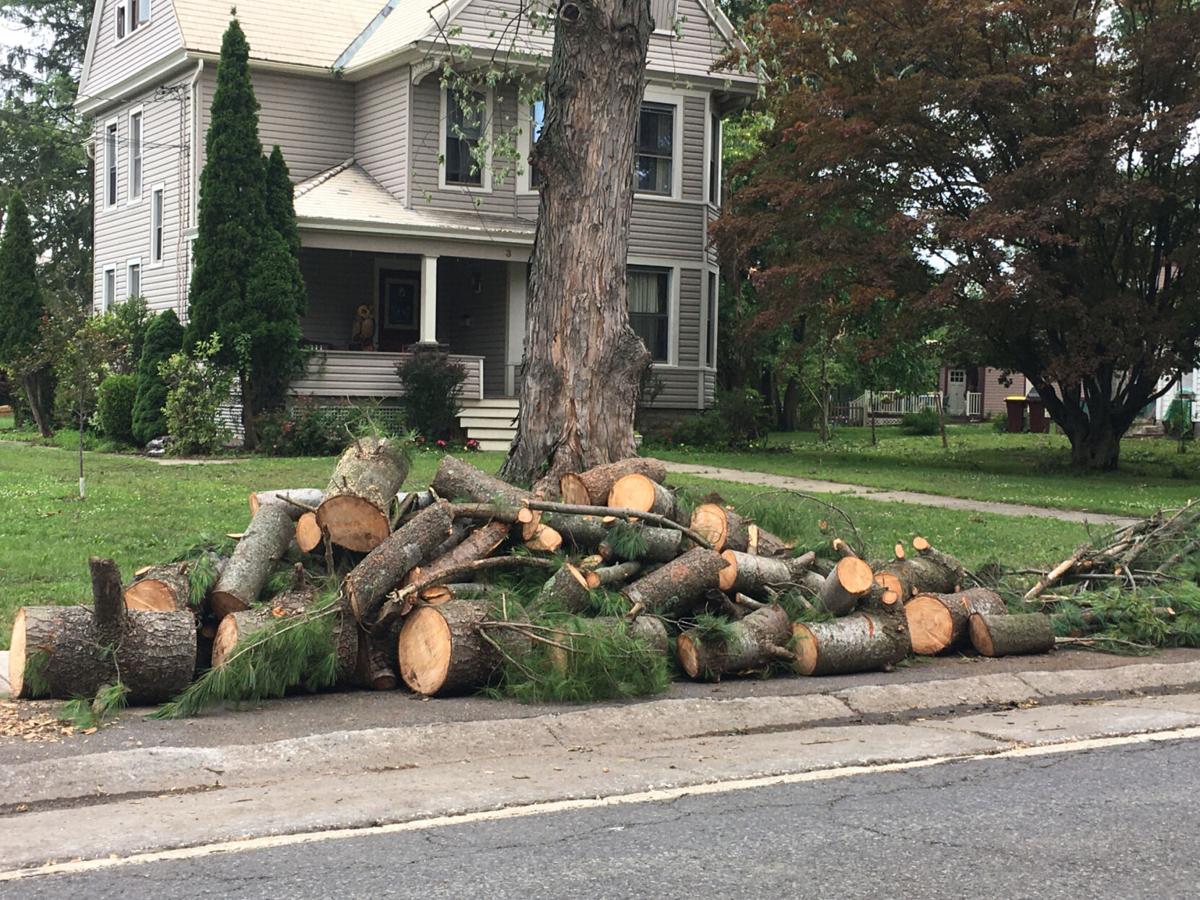 The remains of a fallen tree lie on the roadside awaiting pickup by village work crews. Melanie Lekocevic/Columbia-Greene Media 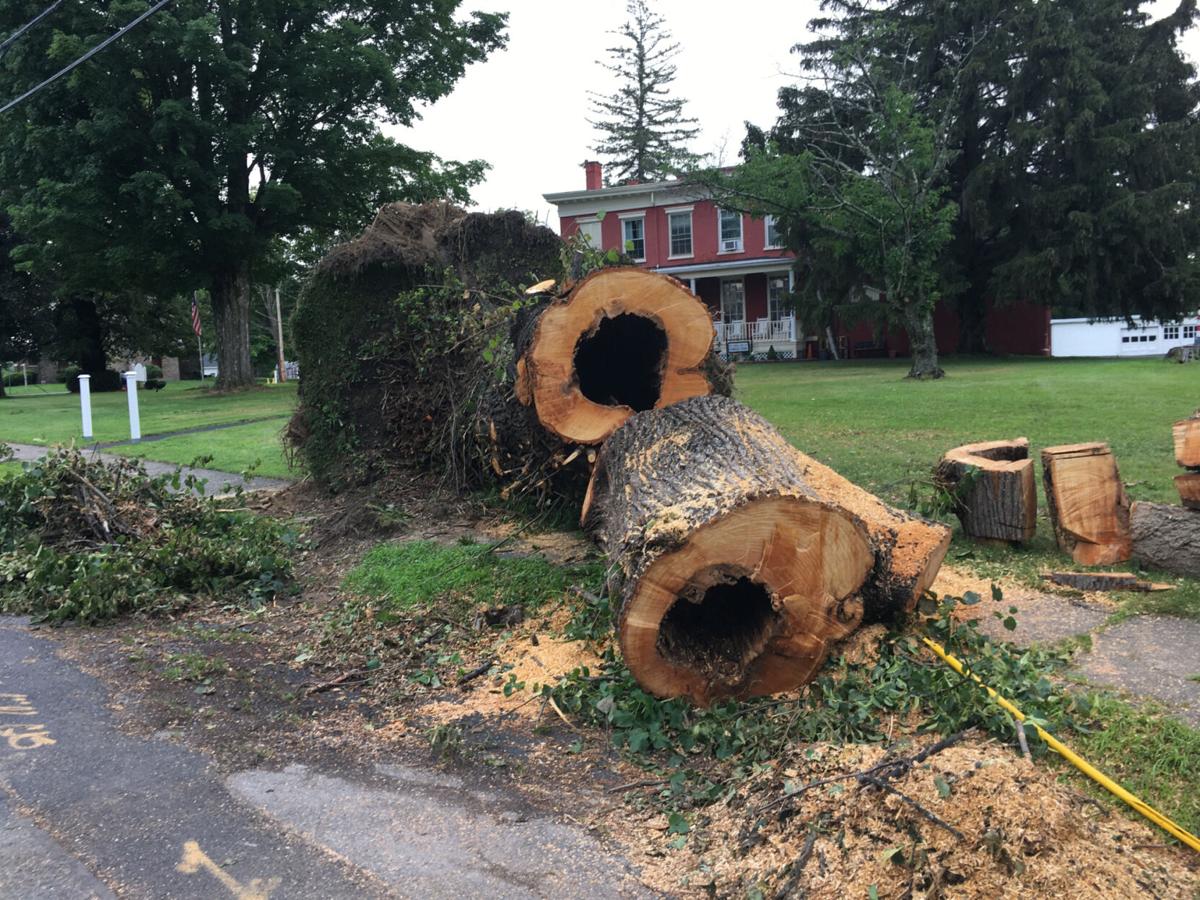 A 100-year-old tree on Mansion Street was pulled from its roots in the storm. The tree has been chopped into pieces and will be chipped and removed by the village. Melanie Lekocevic/Columbia-Greene Media

The remains of a fallen tree lie on the roadside awaiting pickup by village work crews. Melanie Lekocevic/Columbia-Greene Media

A 100-year-old tree on Mansion Street was pulled from its roots in the storm. The tree has been chopped into pieces and will be chipped and removed by the village. Melanie Lekocevic/Columbia-Greene Media

COXSACKIE — Village officials are urging residents to check their yards to make sure there are no dangerous or precarious trees or limbs that could pose a danger in the wake of last Wednesday’s storm.

The thunderstorm, categorized by the National Weather Service in Albany as a microburst — a concentrated column of air within a thunderstorm — tore through the village July 7, leaving extensive damage.

With all roads reopened within a couple of days of the storm and the state of emergency lifted Thursday, there is still plenty of cleanup work to be done, Mayor Mark Evans said Wednesday.

The top priority at this time is making sure no damaged trees or tree limbs could pose a danger, he said.

“We have been going around examining trees along the roadways and looking up to see if there are cracked limbs or trunks to see if they are dangerous,” Evans said. “We are also asking people to check their yards and make sure there is nothing that could fall on their house.”

Homeowners are responsible for taking down trees or limbs on their land. Residents can collect broken limbs or trees and leave them by the side of the road for pickup by road crews. That is typically not the case, but this is an atypical situation, Evans said.

“Normally if someone takes down a tree on their own, the village does not take the materials, but this is an extraordinary situation and we will do our best to clean up everything,” Evans said.

Mansion Street resident Joseph Warren was cleaning up fallen tree limbs and debris Wednesday evening, including the remnants of a 100-year-old tree that was pulled out of the ground from its roots across the street, fell across the road and into his yard.

There was no damage at his home, but the tree crashed into power lines.

“The electric got cut off,” Warren said. “The tree came down and knocked down the wires and fell into my yard.”

Several potentially dangerous trees were removed from public property in the past few days.

“Today the Greene County tree-cutting crew was here and they are going to four or five locations we identified where there are dangerous trees that could take out power lines or fall, and they are taking them down for us,” Evans said Wednesday.

Work crews from the village, county and numerous neighboring towns have chipped in to help remove trees and other debris in the days since the storm.

Crews from eight other municipalities were in the village helping out Monday, including the towns of Windham, Greenville, Cairo, Athens, Coxsackie and New Baltimore, and the village of Athens.

“They all brought crews, machines and chipper machines — that was the biggest thing we needed — and they spent the whole day here working,” Evans said. “We got the majority of the village cleaned up, but after we clean up, a couple of hours later people have gotten more stuff out of their backyards. This is a continual process and we expect it to continue for the next several weeks.”

Several tree removal companies also came to the village to help out of their own accord. Officials do not know all the companies that turned out to help the village, Evans said.

“We will probably never know their names. I wish they would contact me so we could recognize them, but some just showed up on their own and started assisting,” he said. “I really appreciate that.”

Village officials do not have an estimate of how much cleanup efforts will cost.

“We haven’t even begun that process,” he said. “We are still in the cleanup and assessment phase. I really want to make sure we take our time to look at all the trees we are responsible for by the side of roads and in the park to make sure there is nothing dangerous out there.”

The mayor has been in contact with the county emergency services department and elected officials at the state level, and there are no funds available that the village would be eligible for.

“There is nothing at the state level,” Evans said. “At the FEMA (Federal Emergency Management Agency), the county emergency services people told me you have to get to $1.3 million across the county to be eligible for funding. We are not even close.”

There were no injuries in the massive storm, which Evans called nothing short of “miraculous.”

“Two cars were flattened, but they were unoccupied at the time,” he said.