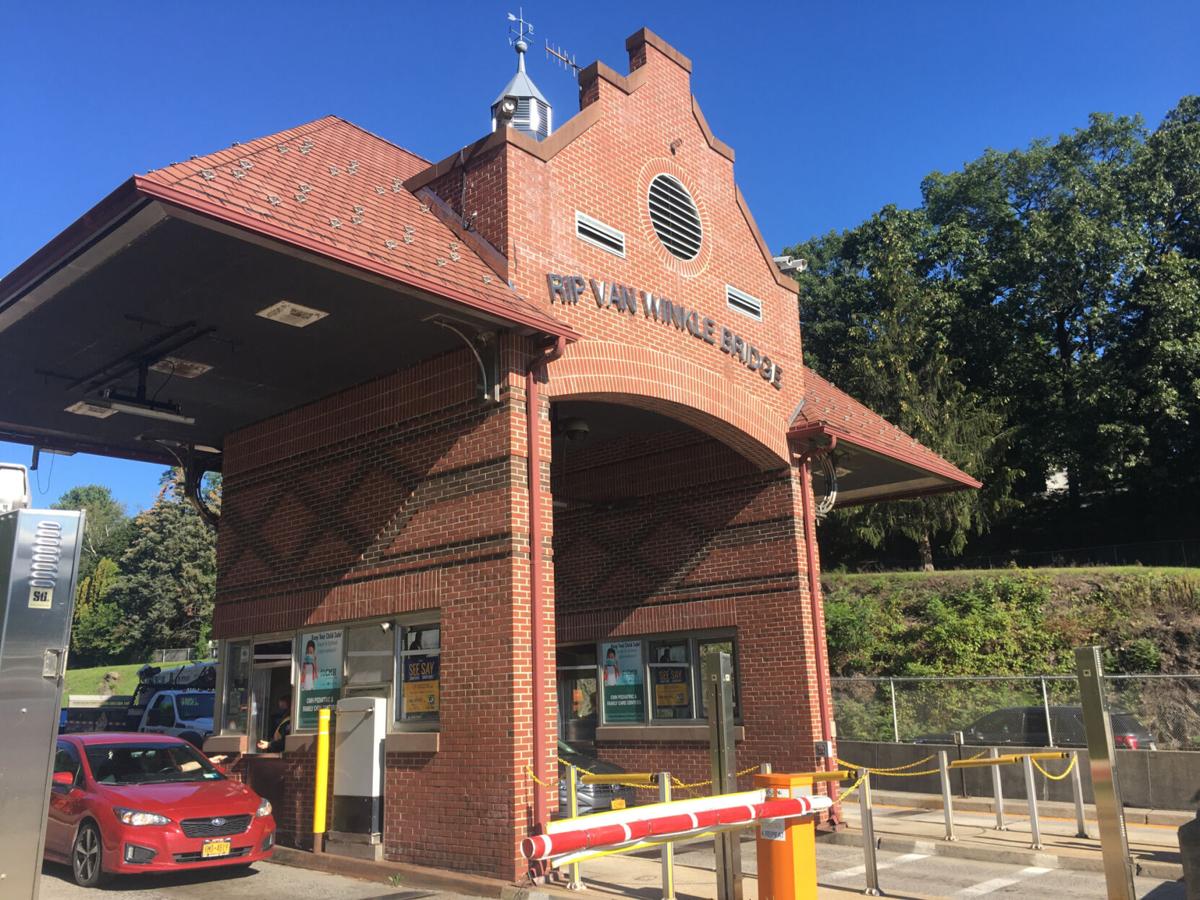 The tollbooths on the Rip Van Winkle Bridge will eventually become a thing of the past, but a demolition date has not been set at this time. Melanie Lekocevic/Columbia-Greene Media 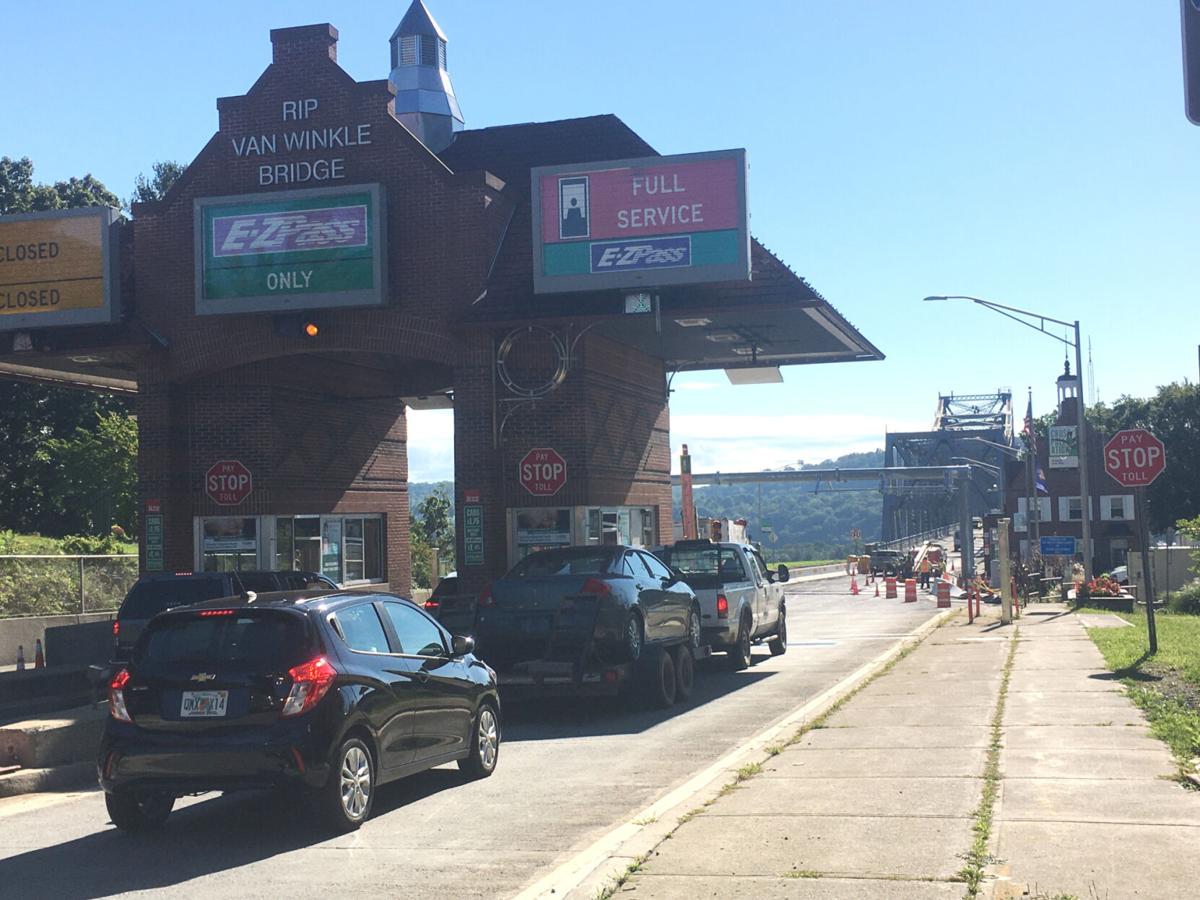 Electronic gantries have been installed between the Rip Van Winkle Bridge’s tollbooths and the span. The gantries will bring cashless tolling to the bridge, but the start date has not yet been determined. Melanie Lekocevic/Columbia-Greene Media

The tollbooths on the Rip Van Winkle Bridge will eventually become a thing of the past, but a demolition date has not been set at this time. Melanie Lekocevic/Columbia-Greene Media

Electronic gantries have been installed between the Rip Van Winkle Bridge’s tollbooths and the span. The gantries will bring cashless tolling to the bridge, but the start date has not yet been determined. Melanie Lekocevic/Columbia-Greene Media

CATSKILL — The electronic gantries to implement cashless tolling have been installed at the Rip Van Winkle Bridge, but the tollbooths are not going away just yet.

Construction of the gantries began July 13 to make way for cashless tolling. Drivers with E-ZPass tags will pay the toll by driving beneath the gantry, which will deduct the toll automatically. Drivers without E-ZPass will have their license plate photographed and will be billed by mail.

While the gantries are up, there is still more work to be done.

“No official date has been set yet for the launch of cashless tolling at the Rip Van Winkle Bridge, but we are still on track to do so this fall,” said Christopher Steber, public information officer for the New York State Bridge Authority. “We continue to install equipment at the facility and once complete, we will begin tests to ensure the equipment is properly functioning.”

All five bridges operated by the Bridge Authority are being converted to cashless tolling.

The first bridge to make the change was the Newburgh-Beacon Bridge, which went live July 7. The Bear Mountain Bridge is slated to be next on the list, followed by the Rip Van Winkle Bridge.

Other bridges to follow include the Mid-Hudson and Kingston-Rhinecliff bridges.

After the switch to cashless tolling is completed, the tollbooths on the Rip Van Winkle Bridge will eventually be slated for demolition, but it is not yet known when that will take place.

“A timeline has not been set yet for the demolition of the current tollbooths,” Steber said Friday. “When the switch to cashless tolling takes place, traffic going eastbound will proceed through lane 1 and go under the gantry. Meanwhile, westbound traffic will travel as it currently does.”

The tollbooths were built in the early 2000s. Other buildings on the property, including the historic administration building, will be retained.

The toll plaza will be reconfigured for new traffic patterns in 2022.

“Next spring, when construction can occur, we plan to start reconfiguring the toll plaza to allow for seamless travel through the plaza,” Steber said. “Notably, westbound travelers who have just crossed the bridge will no longer have to hook to the right in order to pass around the tollbooths like they currently do. Rather, they will keep traveling straight through, in the vicinity of where lanes 2 and 3 currently are.”

In the meantime, the Bridge Authority is encouraging drivers to make the switch to E-ZPass, Steber said.

E-ZPass users are awarded a discount compared to cash customers. The toll for E-ZPass users on the Rip Van Winkle Bridge is $1.45, and drivers paying with cash are charged $1.75.

“In this interim period, we highly encourage all drivers to make the switch to E-ZPass, so they can immediately experience discounted tolls and find a plan and payment system that works well for their needs,” Steber said.

The Rip Van Winkle Bridge opened to the public in 1935 and cost $2.4 million to construct, according to the New York State Bridge Authority website. It became the third span over the Hudson River between Albany and New York City. Passenger vehicles were charged 80 cents plus 10 cents per passenger to a maximum of $1 when the bridge first opened. There were also provisions for one- and two-horse wagons. Tolls were charged in both directions when the bridge first opened. A toll is now charged only when traveling from west to east.

Cashless tolling was implemented on the New York State Thruway in November, when all 58 tolling locations along the 450 miles of the Thruway made the switch.