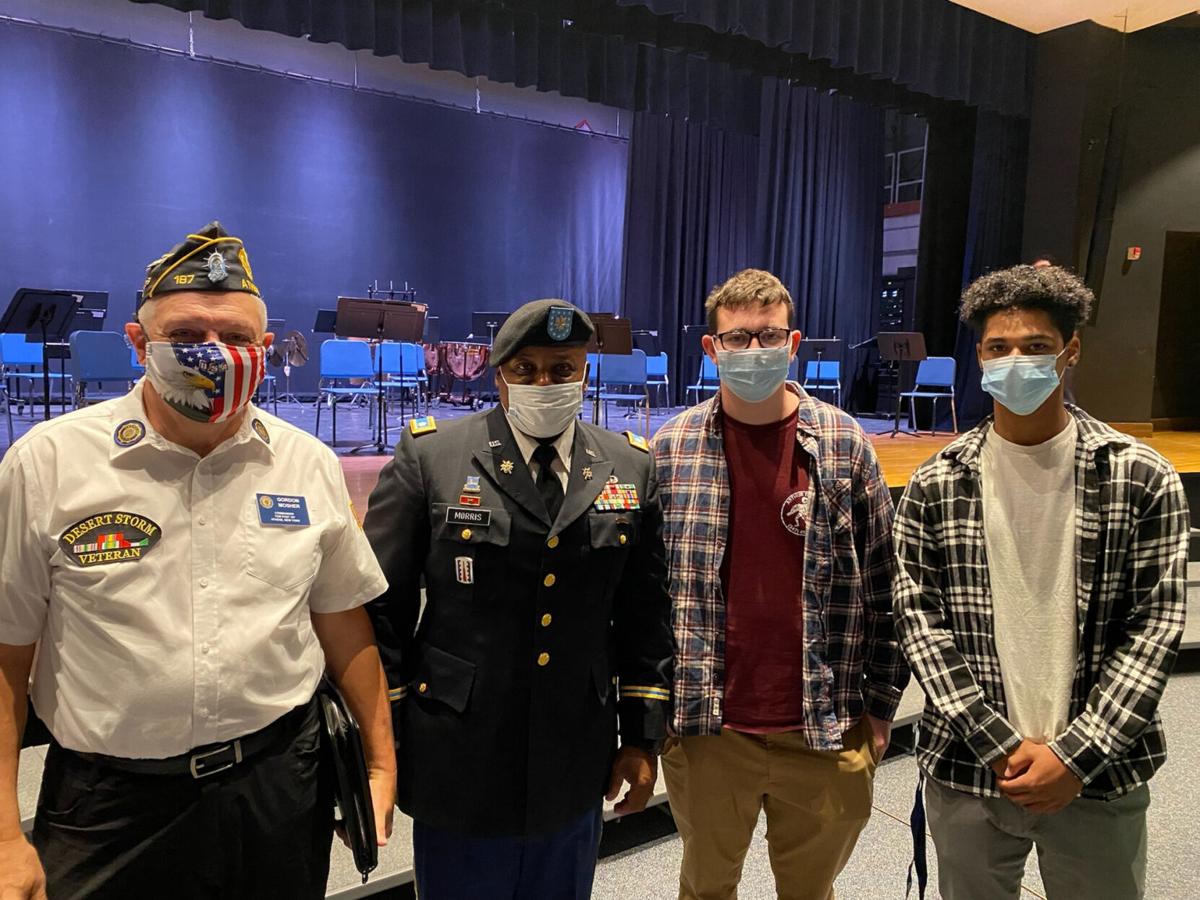 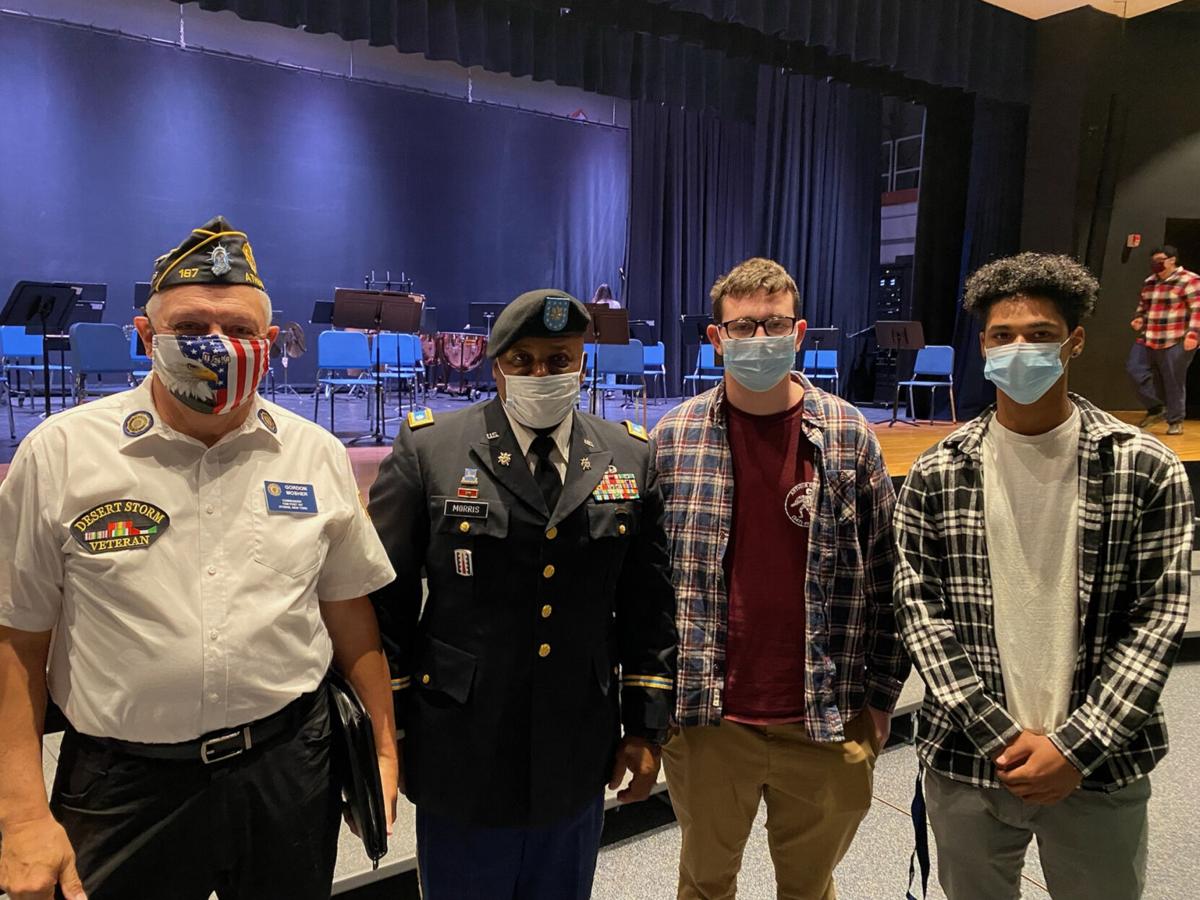 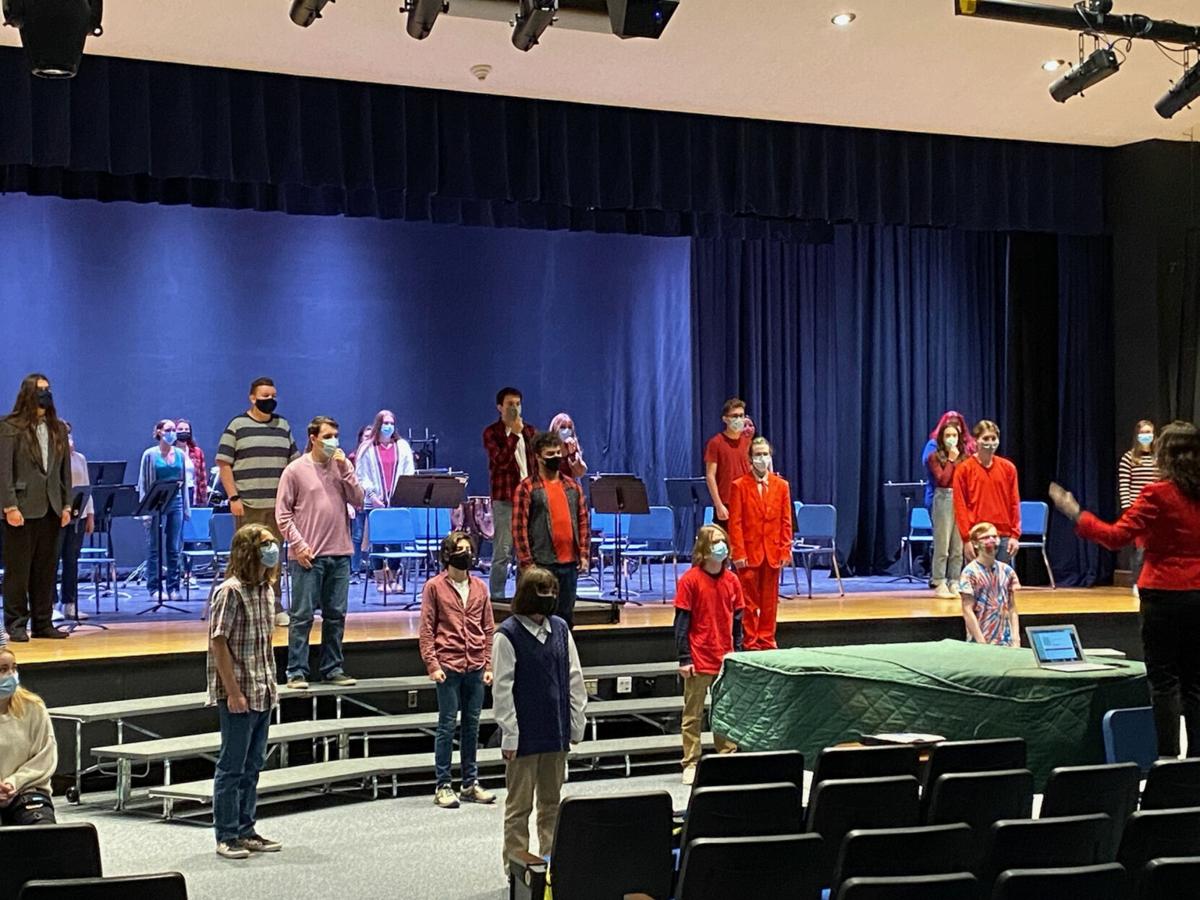 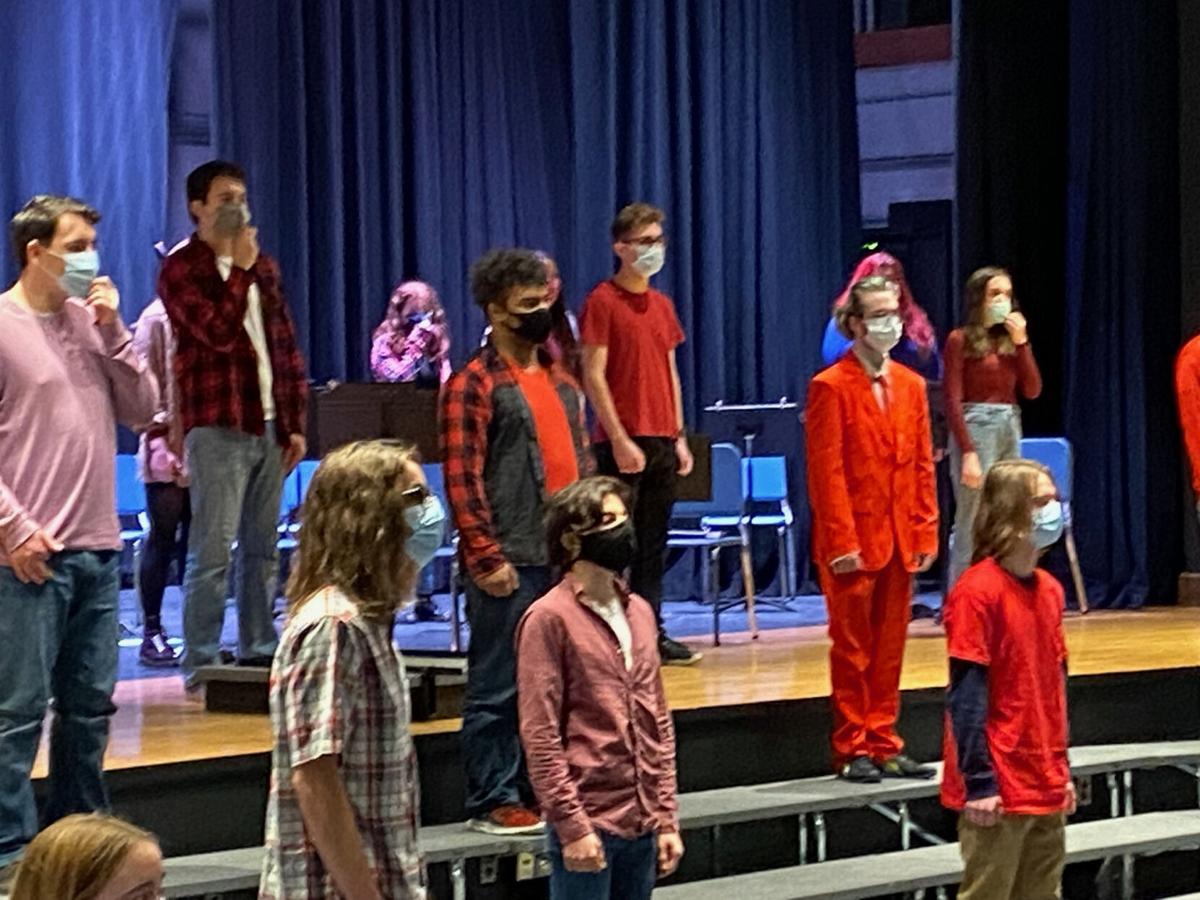 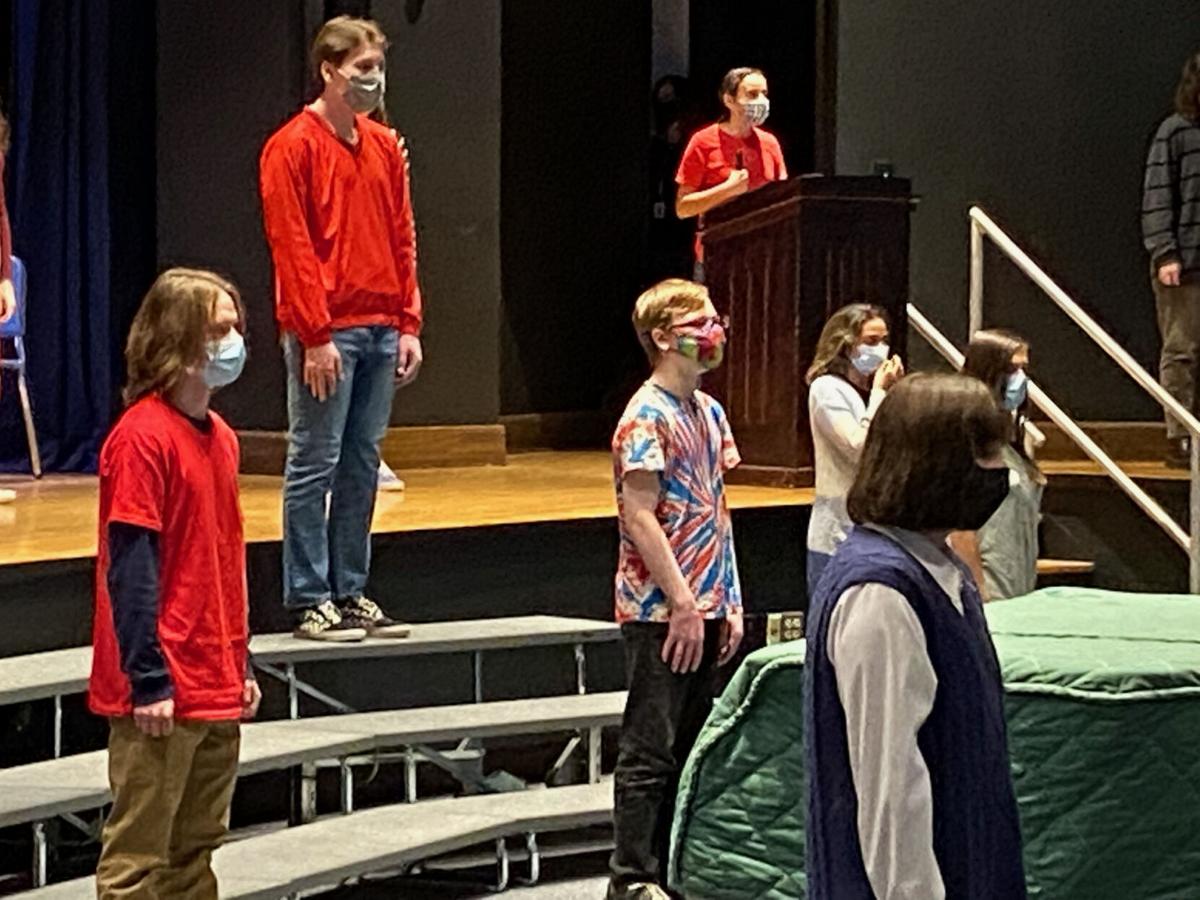 CATSKILL — Catskill High School students paid tribute to local veterans during a patriotic school assembly on Wednesday morning in the high school auditorium. Held on the eve of Veterans Day, the high school band and chorus performed a selection of American-themed songs for the veterans at the ceremony, which included speeches by five Greene County veterans.

The keynote speech was delivered by retired Lt. Col. Cornell Morris, a Catskill native who recently returned to the region after spending six years working for the U.S. Department of Veterans Affairs in Los Angeles.

During his speech to the students, Morris shared the three life lessons he learned growing up in Catskill which shaped his life.

His first rule for the students was to be their own best friend.

Morris’ second lesson was more prosaic. He told students that every day they should be sure to make their beds.

Morris, a licensed clinical social worker at the Albany Stratton VA Medical Center, told the crowd that as a young man he never listened to his mother when she told him to make his bed, but that his lack of discipline with that dull task came back to bite him when he joined the military. When he got to boot camp, Morris’ commander asked him if he had made his bed.

“The drill sergeant looks down at my bed and suddenly transforms into the Tasmanian Devil and flips my bunk over,” Morris told the students. “‘Private, that bed looks like kaka! Try again.’” Morris said that when instilling discipline, even the simple tasks matter in life.

“In my interpretation, it really matters to do the small tasks because they contribute to the bigger tasks in life,” McCann said after the assembly.

A Catskill High School graduate, Morris strolled the halls of his alma mater after the assembly and greeted old acquaintances.

“This was really personal for me,” he said after the event. “I’ve spoken all around the world, but I can actually walk here to the back of my house. So this is close to home for me. I remember how so many teachers influenced my life when I was here. So when I was putting together my speech I wanted to make sure that I selected things that were important to me and helped me continue on when I was in the military.”

Kiernan read a question from a student that asked her what motivated her to join the service and how she told her family about her decision.

“I enlisted in the Marines because I’m a proud American and I felt I should earn my freedom in my country,” she said. “My mother respected my decision and wanted me to be safe and I was.”

Last year’s Veterans Day assembly at the high school was canceled due to the COVID-19 pandemic, but this year’s event had good fortune to fall on the 246th anniversary of the U.S. Marine Corps.

“The importance of this event is for the students to get a real-life visual as to what Veterans Day looks like,” Catskill High School Principal Junait Shah said following the assembly. “We had the veterans coming in their uniforms and speaking to us and telling us about what their trials and tribulations were. It’s just so important that they understand that. That could be a career path for many of these kids and that wouldn’t be the worst thing.”

Student government representatives Emma Brown and Karsen Chiminelli read the Pledge of Allegiance to begin the day’s program, and were followed by performances of “The Star Spangled Banner” and “Aces of the Air.” After the veterans’ speeches, the school’s concert chorus delivered renditions of “Ten Songs for America” and “A Tribute to the Armed Services.”

In his introductory remarks, Catskill Central School District Superintendent Ronel Cook thanked all of the veterans for attending the assembly.

“Today we honor all of our veterans who selflessly put their lives on the line for our freedom,” he said. “Those men and women were ordinary people until they heard the call of duty and answered it. They left their families, their homes and their lives. Not for recognition or fame or even the honor we bestow upon them today. They fought to protect our country and to maintain our way of life.”

To wrap up the ceremony, junior Meeghan Darling sang “God Bless America” while student Ian Ciancanelli closed out the assembly with a solo trumpet performance of Taps.

The veterans then headed over to Catskill Elementary School for a second event with younger students Wednesday afternoon.

Local veterans in Columbia County reflected Wednesday on what Veterans Day means to them at a ceremony at Columbia-Greene Community College attended by students and college staff.

“This is a special time each year that we honor veterans,” Columbia County Veterans Services Agency Executive Director Gary Flaherty said. “As we once again meet this week to pay attention to what is really important in these days of so much strife in our beloved country, as veterans we must, and we will, take point.”

Flaherty said that while Veterans Day ceremonies are important, he added that gratitude for all veterans present, past and future has to be more than once a year.

“Veterans Day for me means an opportunity to remember and to thank those who have served,” U.S. Navy veteran and Columbia-Greene Community College Veterans Affairs Task Force Committee Chairman Kevin Kropp said. “I have many student veterans at the college, and it reminds me that, although we do a lot, it’s not enough. And we should be doing more for our veterans every day, than just once a year. Veterans Day means a lot to me.”

Kropp said it was family tradition that led him to join the Navy. His father served in Korea and was an aviation electrician, his brother was a corpsman in the Navy.

Kropp led the Veterans Day ceremony at the college.

“Veterans Day is a day to remember those who have served, those we’ve lost, and to remember the military is protecting everybody.” Borowsky said.

Another veteran who was inspired by family members was Anna Cortese, who said her father served in World War II. Cortese is a retired U.S. Army nurse who retired with the rank of lieutenant colonel, she served from 1991 to 2013. She is now a professor of nursing at the college.

“I just think of thanking everybody and for paving the way for me, too, as a woman in the military, too,” Cortese said. I feel like I had a lot of great role models, and I want to thank them.”

There are about 3,600 veterans in Greene County and the 4,100 in Columbia County, according to Veterans Service Agencies in both counties.

“It’s just a day to remember those who have served, and basically dedicated their time, service, sweat and tears to the country that we all enjoy the freedoms of having,” said Tyler Lynch, a veterans service officer at the Greene County Veterans Service Agency.

This year, Nov. 11 2021, marks the 102nd anniversary of Veterans Day. Veterans Day, formerly known as Armistice Day, was originally made a legal holiday to honor the end of World War I. According to the U.S. Department of Veterans Affairs, in November 1919, President Woodrow Wilson proclaimed Nov. 11 as the first commemoration of Armistice Day.

In the years since, the day has evolved into an event recognizing not only the veterans of World War I, but in 1954, Nov. 11 became a day to honor all American veterans of all wars.

New York state boasts 718,900 veterans, a number among the highest in the nation, according to the state Department of Veterans Affairs.