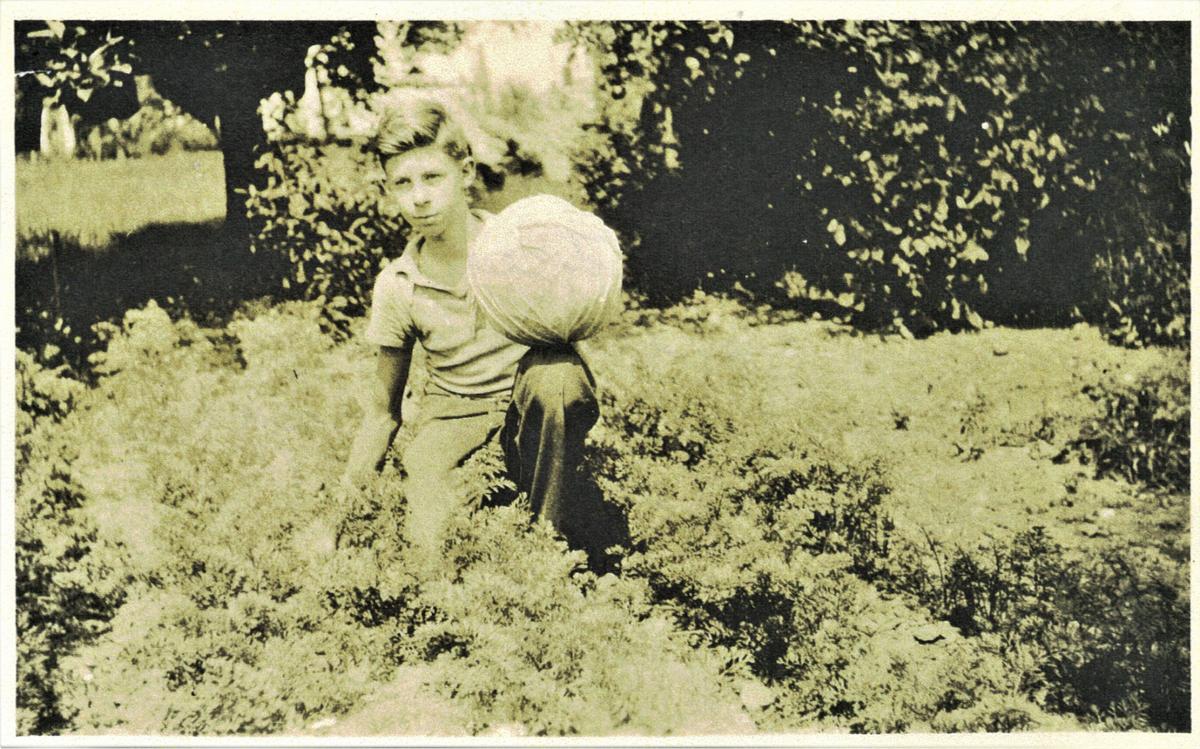 Contributed photoGeorge Story holding a cabbage he grew in his garden in Freehold in 1936. 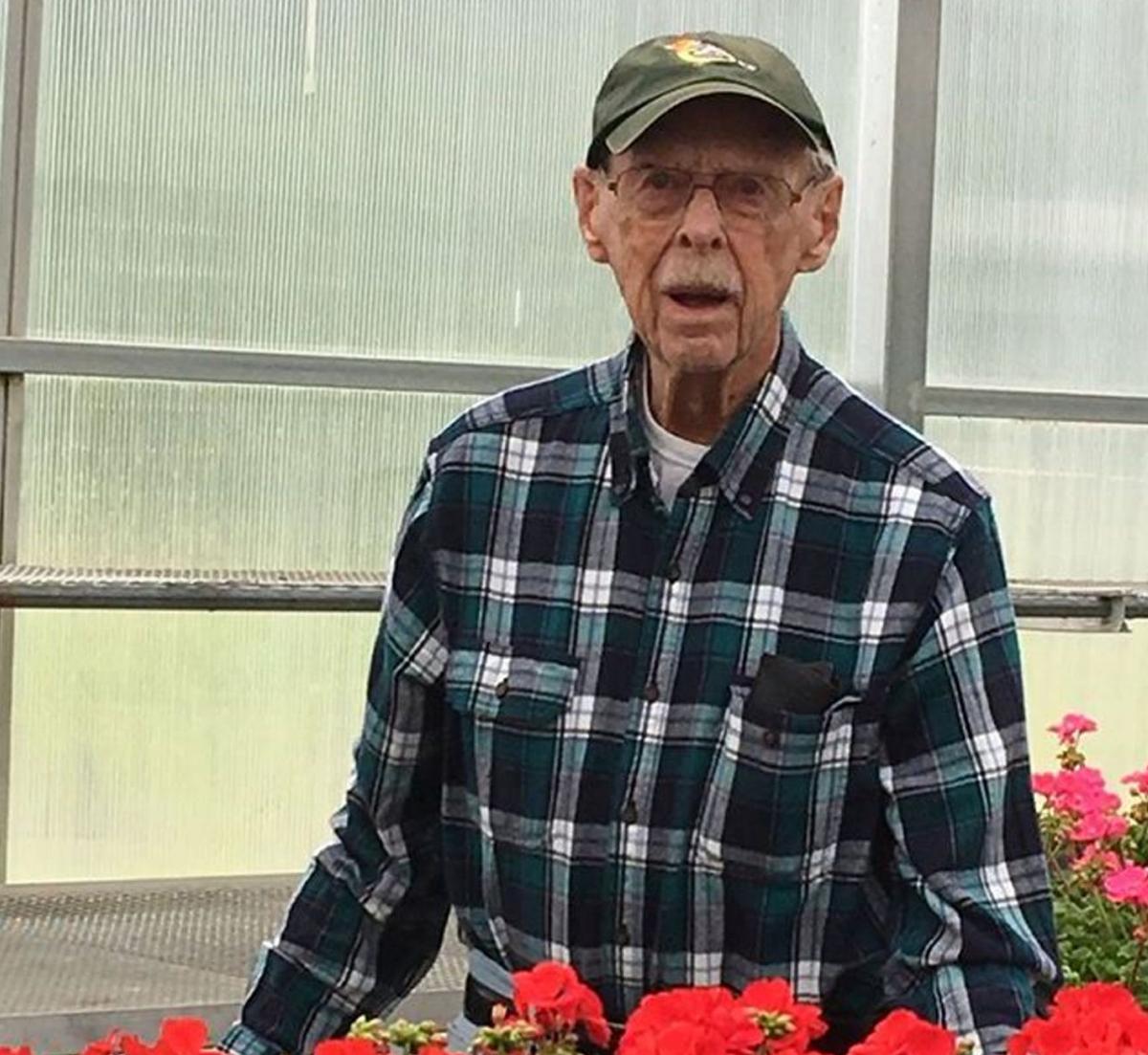 George Story, founder of Story’s Nursery in Freehold, turns 100 this Saturday. He lives in Ghent.

Contributed photoGeorge Story holding a cabbage he grew in his garden in Freehold in 1936.

George Story, founder of Story’s Nursery in Freehold, turns 100 this Saturday. He lives in Ghent.

George Story, who turns 100 on Saturday, says his secret to longevity is...a secret.

“I’ll take that with me when I go,” Story, the founder of Story’s Nursery, said Thursday.

Story, whose 100th birthday party is open to the public from 1-4 p.m. Saturday at the Freehold Firehouse, is coy about his centenarian status. But anyone who has ever visited Story’s Nursery may guess the secret he’s keeping.

“Everyone would come in and say, ‘Oh, I wish I worked here,’” said Pam DeGeyter, Story’s daughter. “It’s just great to be working around plants and flowers.”

Story lived in Freehold until recently, when he moved in with his daughter, who lives in Ghent.

He founded Story’s Nursery on land gifted to him by his grandfather, and for decades it has been a mecca for gardeners and plant lovers in Greene County.

Story was known for not sitting still. Customers would often find him pulling dead leaves off geraniums in the greenhouses, giving gardening advice or filling in as a deliveryman. At 99, he was a fixture at the nursery.

“This past year I would go in almost every day during the week for an hour, two hours,” he said. “I had a job I did, cleaning plants. I could stand up and do it.”

Story loves being surrounded by plants in the greenhouse.

“Hopefully this spring I’ll be able to go back again,” he said, “if my cane doesn’t break.”

He is a man who takes immense joy in observing the world around him, Story’s family and friends said.

“He would lose himself in the plants. That was his stress releaser,” said Stephanie Story, his eldest daughter.

“We would go on vacations and trips and I don’t know how we didn’t have an accident, because his eyes were never on the road. They were always out the window, looking at the clouds,” said daughter Christine Story. “He always noticed nature and he shared that with us.”

Ken Thompson, who joined Story’s Nursery in 1976 as a landscape designer and became Story’s business partner in 1980, said Story’s knowledge of the business is vast.

“George knows plants from A to Z, from vegetables to trees. There are very few people as well-rounded, and with the knowledge he has. He still has it.”

Story was always willing to share his knowledge with others, employees at the nursery said.

“George has taught me most of what I know about plants and has shared his love of horticulture with so many,” said Rachael Ashley, the greenhouse and garden shop manager, who started working for Story in 1982. “He is a kind man with a great sense of humor.”

Before he was a mentor and gardening guru, Story was just a boy with his hands in the dirt.

By high school he was running manure hot-bed experiments with his friend Arthur “Pete” Carlson and keeping meticulous gardening journals and weather records.

As a teenager, Story went off to Cornell University to study agriculture.

“I didn’t know enough to do anything else,” he said, and returned home to work with his father, selling vegetables at a stand in Freehold and at the Menands market north of Albany.

“I have many memories of going up there early in the morning and coming back and working all day. Took tomatoes, cauliflower, broccoli. I can remember packing the boxes,” Story said.

Slowly the vegetable business gave way to flowers and shrubs.

“I went to New Jersey and bought nursery stock and evergreens and planted them in my grandfather’s farm,” he said. “It just grew little by little. It didn’t happen overnight.”

As the wholesale and retail nursery took off, Story’s seven children pitched in.

“It was a family thing,” he said. “The kids weren’t running around the house creating mayhem. They were doing something useful.”

Then came the oil embargo of the 1970s. The cost of fuel was so high that Story’s Nursery was forced to file for bankruptcy.

“I felt like I was just a bystander, it was all going on over my head,” but, Story said, “We rose from out of the ashes.”

Thompson and Ashley joined the nursery staff soon after, and Story credits them with helping to turn around the business.

“You can’t take care of everything yourself,” he said.

Story’s long life, and the impact he had on so many gardeners and plant lovers, will be celebrated Saturday. The party will be hosted at the Freehold Firehouse, a former one-room schoolhouse Story attended as a child.

Story said that after the birthday party, he is looking to spend the spring in Freehold.

“I can get out and see some of my old friends,” he said. “That’s important, too, being able to see some of the people I’ve known. It’s good to be in my hometown.”