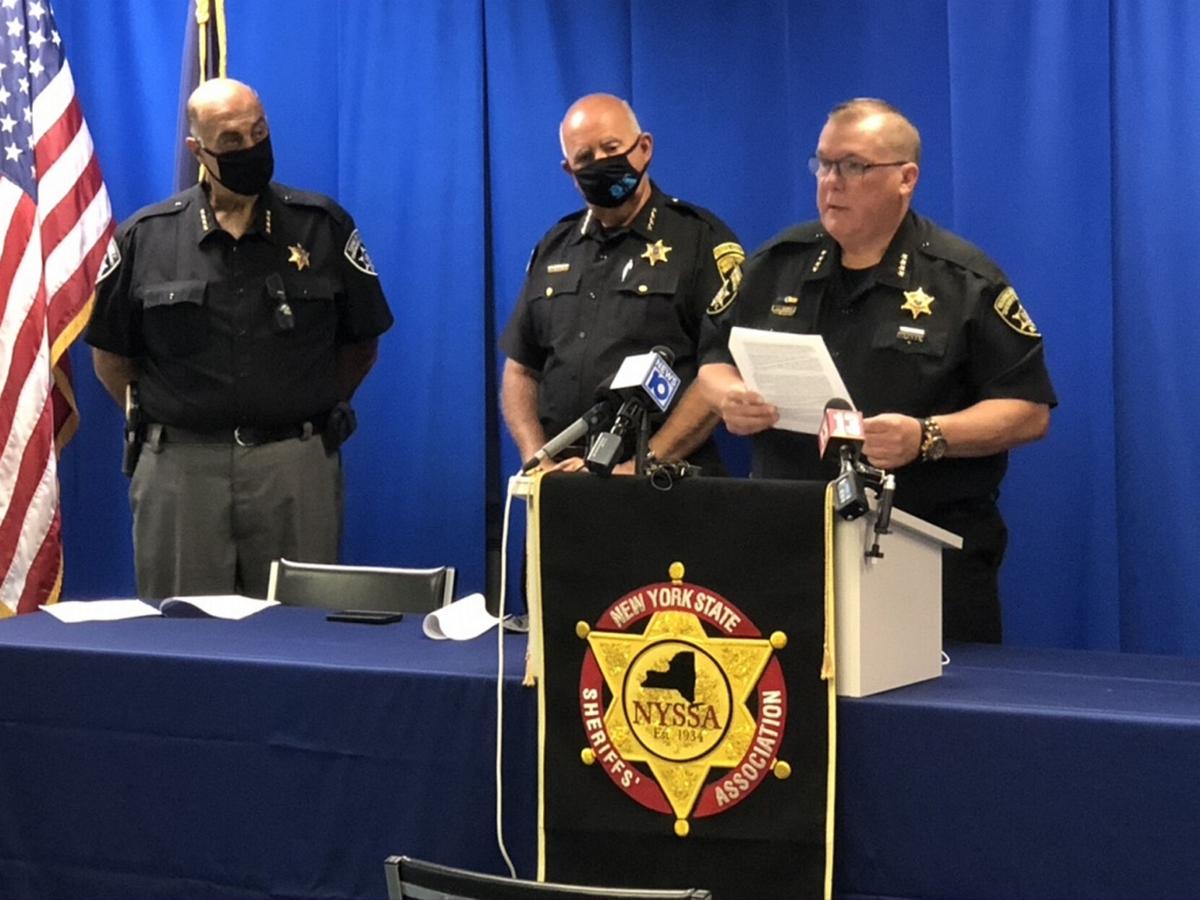 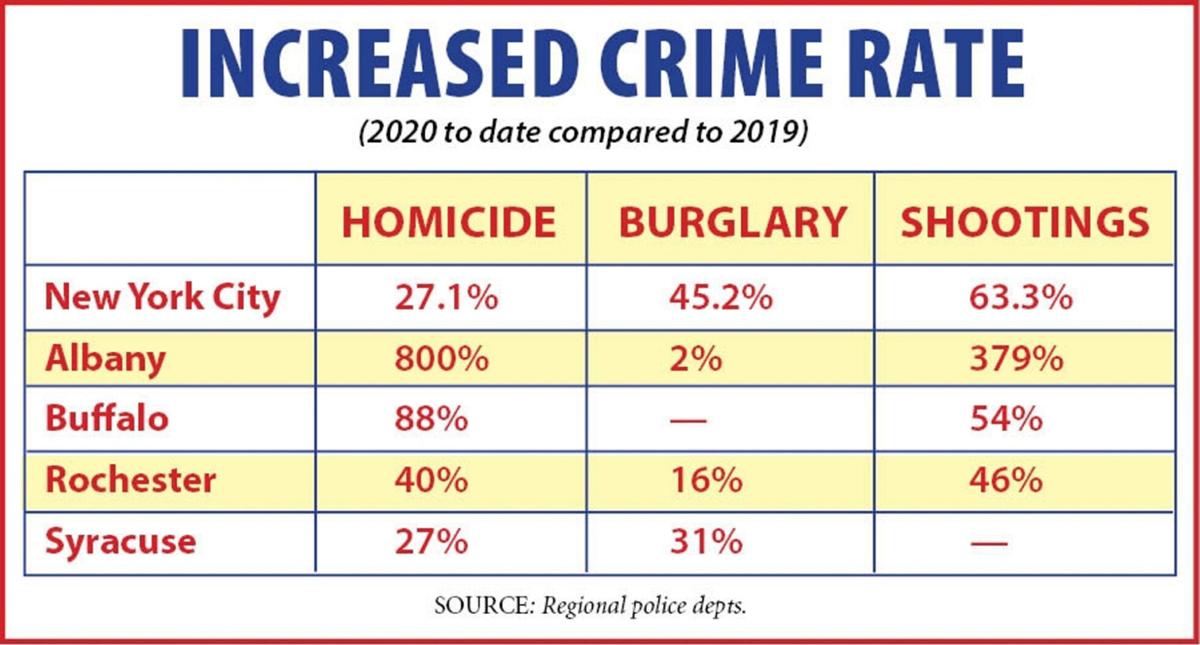 Cities statewide have seen a sharp increase in violent crime in 2020 compared to 2019. Law enforcement credit the crime spike to the state’s recent police reform bills and anti-police rhetoric.

Cities statewide have seen a sharp increase in violent crime in 2020 compared to 2019. Law enforcement credit the crime spike to the state’s recent police reform bills and anti-police rhetoric.

Police proposed to upgrade resisting arrest to a class E felony, failure to retreat to a class D felony and a class D felony to falsely accuse an officer of wrongdoing, which cannot be reduced by plea bargaining and requires a judge to post bail. Sheriffs suggested a proposal to make any crime committed against a police officer because of his or her profession a hate crime.

Sheriffs also encouraged the Legislature to recognize law enforcement by passing a $500,000 disability and death benefit and to designate May 15 as state holiday Police Memorial Day to honor the 1,500-plus officers who died in the line of duty in New York. The governor would be required to attend the ceremony and read the list of names.

“We all know law enforcement is not an easy job,” state Sheriff’s Association President and Washington County Sheriff Jeffrey Murphy said. “What we want to see is police are able to safely do their job and go home to their families at night.”

“I think you’ve seen despite some of the rhetoric, the facts are, police officers are shot and killed in this country routinely,” he said. “We routinely have reached out to the governor’s office to be part of these orders. We don’t get much feedback from the governor’s office or from the legislators, quite frankly, who are proposing these bills. That’s why we’d love to have a seat at the table.”

“We think it’s time the Legislature consider bills like these that support law enforcement in a time where, in the history of this country, if the police were ever needed, it’s now,” Kehoe said.

Sheriffs also proposed to make it a class E felony to stalk an officer and a class D Felony to dox a police officer because of their profession and to upgrade police assault crimes one felony degree.

Sheriffs plan to send the legislative proposals to Gov. Cuomo and Democratic and Republican leaders in the state Senate and Assembly within the coming days.

“To the extent that these are real bills, we’ll review them,” Cuomo’s Deputy Communications Director Jason Conwall said Wednesday.

“We didn’t want to make this political,” Murphy said. “This is something we’ve had in the works for weeks.

“There’s a lot that has to be done to restore the trust in policing,” he added of his county’s multiple programs that support children, senior citizens and the community. “We have nothing to hide. We have everything to show — we want to show everything we do.”

Greene County Undersheriff Adam Brainard was in attendance at Wednesday’s conference, and said he supports increasing penalties for crimes against police or resisting arrest.

“There’s definitely a fine line between holding police officers accountable and making sure the people they’re interacting with are held accountable for their actions also,” he said.

Greene County residents have become increasingly positive and encouraging in their interactions with police, Brainard said. Many upstate law enforcement already receive the implicit bias or de-escalation training, he explained, noting most

“Some law enforcement is put off by the broad brush that has painted every officer as in need of training, uncaring or racist or any of the hot topics when many of our officers are highly trained and educated and highly sensitive to these situations,” Brainard said. “Although we have certain issues and problems, I think law enforcement and leadership in this county has been proactive. With all the different issues and concerns, I think we’ve been ahead of the curve.”

Columbia County Sheriff David Bartlett, who serves as the association’s first vice president, did not return requests for comment Wednesday about the proposals.

Murphy said while he doesn’t agree with the legislative process, police can improve their training and processes from Cuomo’s executive order that requires each of the state’s 500-plus police agencies to publicly meet with people in their communities and redesign policing strategies by April 1, 2021, or forgo state funding. The governor issued the June 12 order after signing 10 police reform bills into law, including publicizing law enforcement personnel records with the repeal of 50-a.

“We don’t want this to appear we’re being defensive or divisive,” Murphy said. “We’re arguing there’s a problem in the state regarding policing and how law enforcement is viewed right now. It’s extremely important for us to get that message out that we want to work with the governor. We want to work with the Legislature. We want a seat at the table.”

This is a political power grab by the police to silence people with the threat of enhanced charges. I hope it is not seriously entertained by the NYS legislature.

It should be considered by legislation. Why is it wrong for police officers who put their lives on the line everyday to want protection as well? This has nothing to do with silencing people. Why shouldn’t there be enhanced charges? You see this as “a political power grab” and stating that the police are trying to silence people but they are trying to protect themselves from criminals. This needs to be more then “entertained” by the NYS legislature, it needs to be seriously considered. Supporting criminals and criminal behavior is ignorant. Without laws and policing this world would be chaos and lead to anarchy.