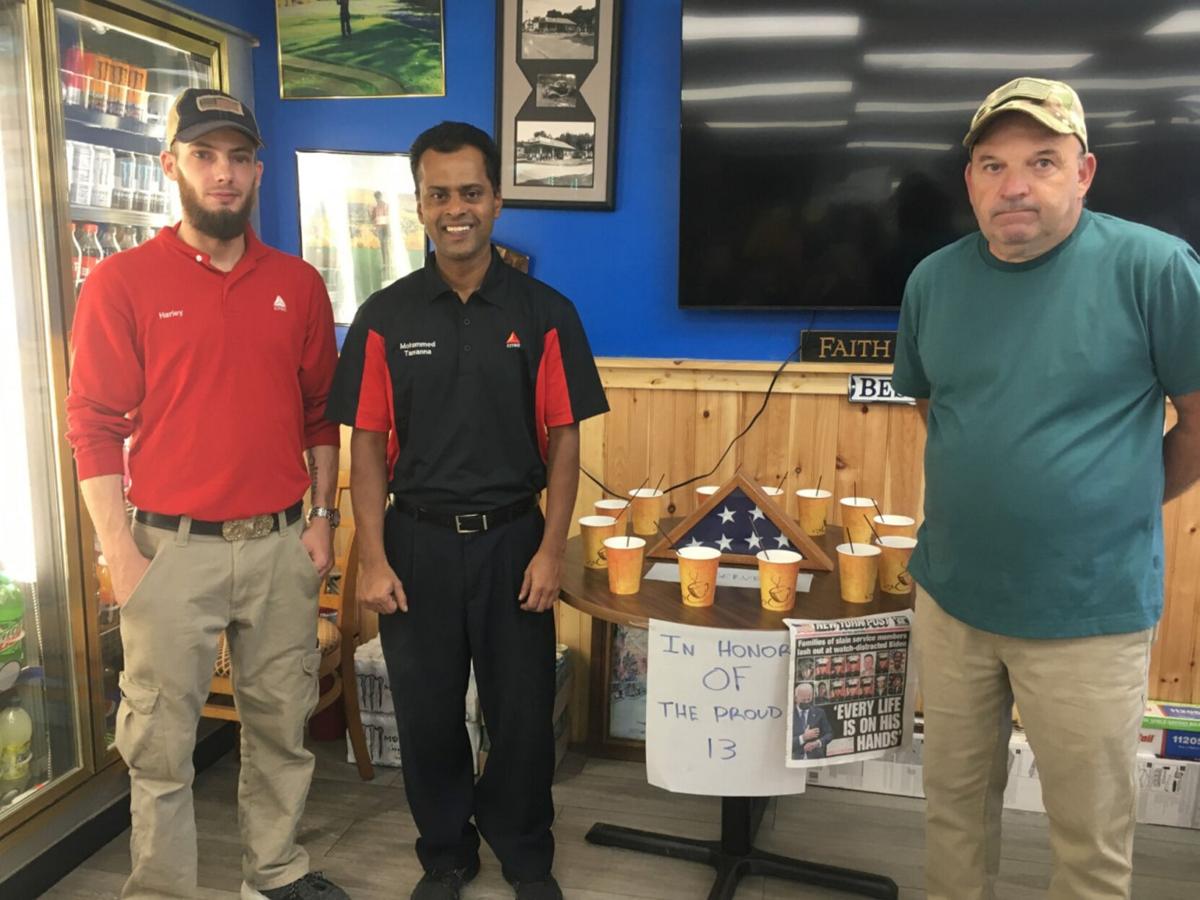 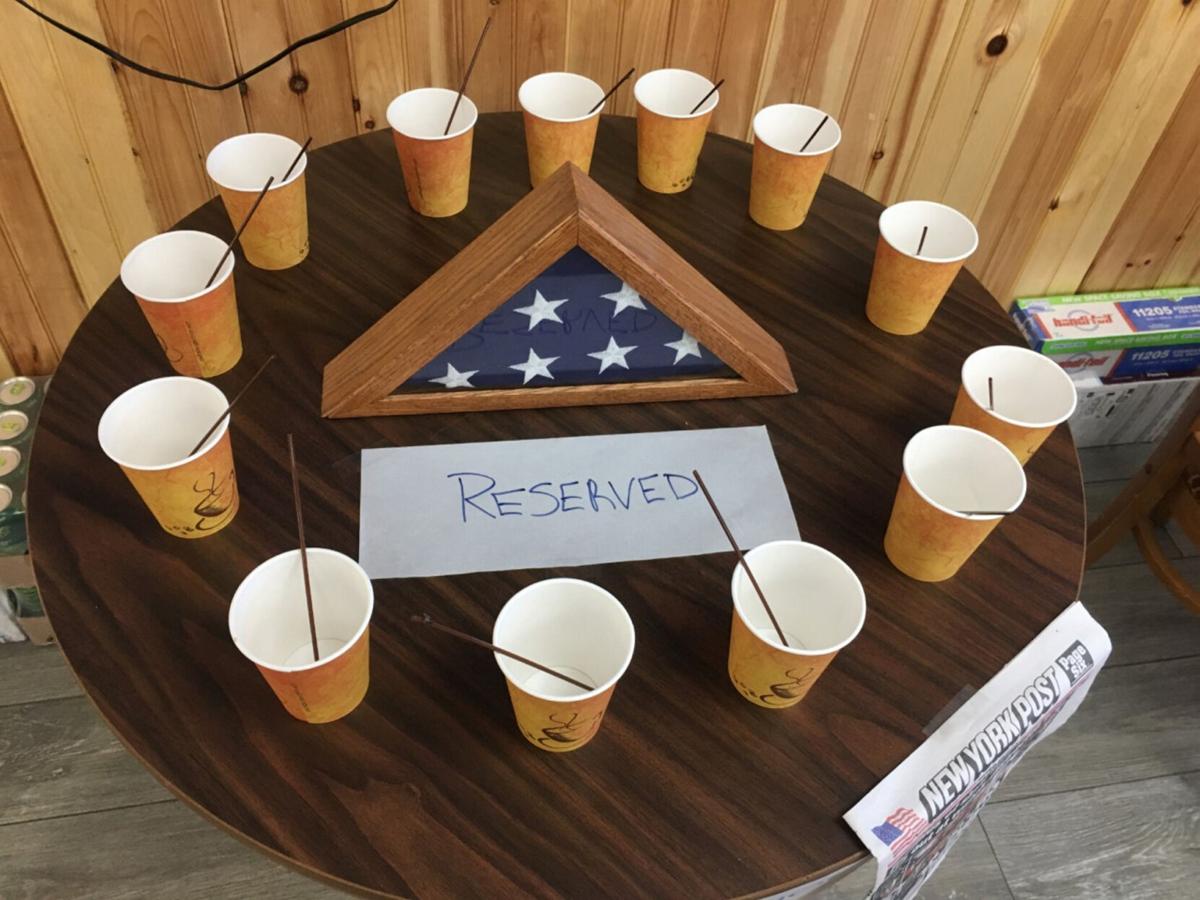 A “table of honor” inside the Citgo gas station in Cairo. Thirteen empty coffee cups, one for each service member who died in a suicide bombing at the Kabul airport in Afghanistan, and a folded U.S. flag are in honor of the slain. Melanie Lekocevic/Columbia-Greene Media

A “table of honor” inside the Citgo gas station in Cairo. Thirteen empty coffee cups, one for each service member who died in a suicide bombing at the Kabul airport in Afghanistan, and a folded U.S. flag are in honor of the slain. Melanie Lekocevic/Columbia-Greene Media

CAIRO — A local combat veteran and a Cairo business owner are offering a unique salute of their own to honor the 13 service members who died in the bombing at Kabul International Airport during the U.S. military withdrawal from Afghanistan.

Mike Adrian, commander of American Legion Post 983, works at the Citgo gas station, 4625 Route 23, Cairo. He wanted to honor the troops who died in a suicide bombing at the airport Aug. 26 as American citizens and Afghan allies were attempting to flee the country.

The bombing killed 13 American troops and about 169 Afghans.

“We heard about the men and women who lost their lives so we wanted to honor them with a last cup of coffee that they would never have again,” Adrian said.

Adrian and gas station owner Minhajuddin Mohammed decided to set up a Table of Honor inside the building, with 13 empty coffee cups — one for each service member who died in the bombing.

The Table was set up Wednesday and will remain for about a week, Adrian said.

He got the idea from social media, where restaurants, bars and other businesses are putting up similar displays.

“Everybody is doing it. Bars are putting out 13 bottles — I watched a video where 13 people walked up and saluted,” Adrian said.

He knows well the hardships faced by troops in hostile territory — Adrian served more than two decades in the U.S. Army, including combat time in Iraq. He spoke about the deaths of the troops at the Kabul airport with a heavy heart. “I spent 23 years in the service and to me it was very sad what happened,” Adrian said. “It didn’t have to happen, but it did. This is for them (the troops) — the last cup of coffee that they will never have.”

Adrian approached the gas station’s owner about putting up the display, and Mohammed eagerly agreed.

“Mohammed came to this country and became a citizen. He did it the right way, he loves this country,” Adrian said. “I said can we do this, and he said, yeah, go for it.”

Mohammed said he was proud to display the table of honor at his business.

“We lost troops over there — that is the most important thing,” said Mohammed, who emigrated to the United States from India. “We work hard for everything in this country and we lost them and miss them (the troops). It is important to protect the country.”

The reaction from the community to the Table of Honor has been enthusiastic, Adrian said.

“I think it’s a great thing. It’s beautiful,” Puorro said. “They need representation. I know a lot of restaurants and bars are doing this, and I think it’s a good thing.”

Cairo police officer Tom Plank appreciated the salute to the slain troops and expressed anger at how the Biden administration handled the withdrawal from Afghanistan.

“I can’t believe they did this,” Plank said. “How do you leave United States citizens behind? How do you pull the troops before you pull your citizens out? That makes no sense whatsoever.”

Plank thanked the troops who were slain and those who returned home safely.

“Thank you for your service and trying to protect the citizens that were there,” Plank said.

Adrian mourned the loss of the 13 service members who died in the attack.

“They lost their lives and they will never come back home,” Adrian said. “It is the saddest thing in the world.”