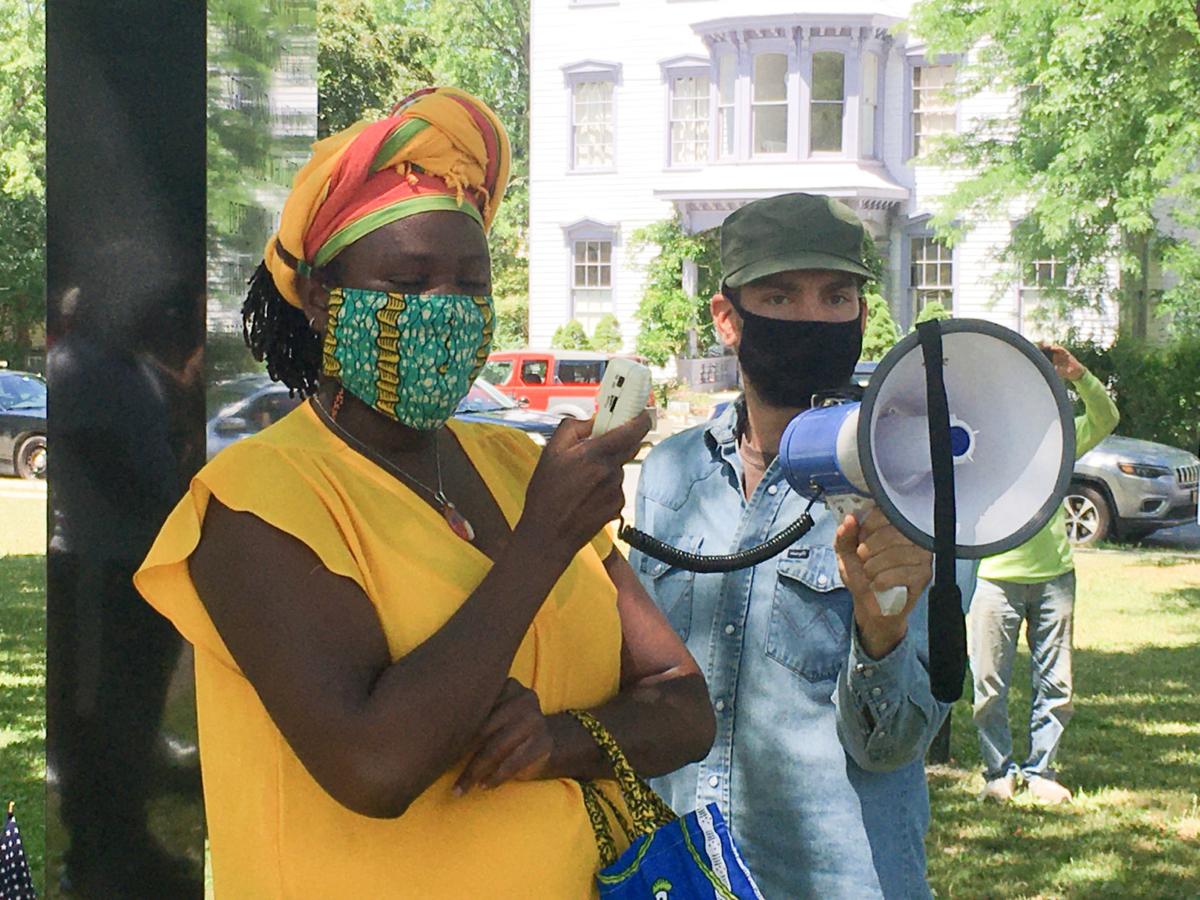 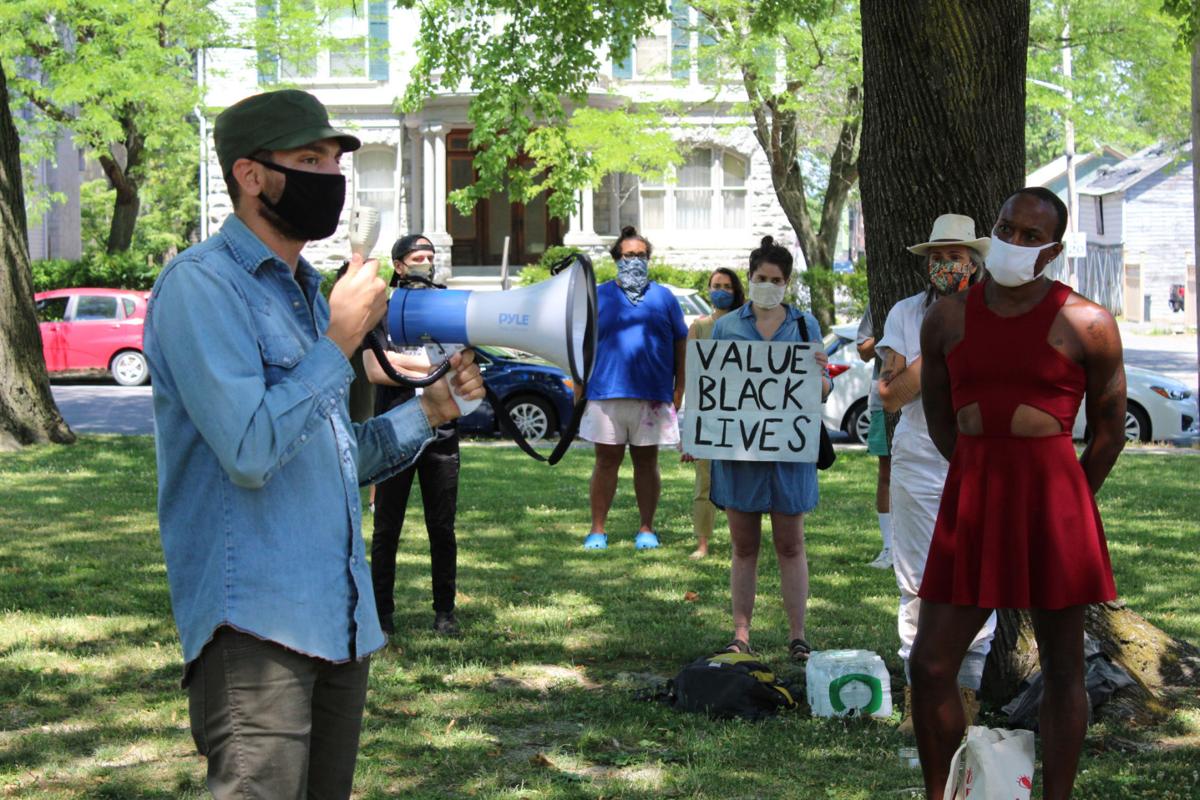 Matt Fortunato/Columbia-Greene MediaBryan MacCormack speaks out in support of Alima Bonsa, who is in a custody dispute with her ex-husband and has made allegations of abuse. 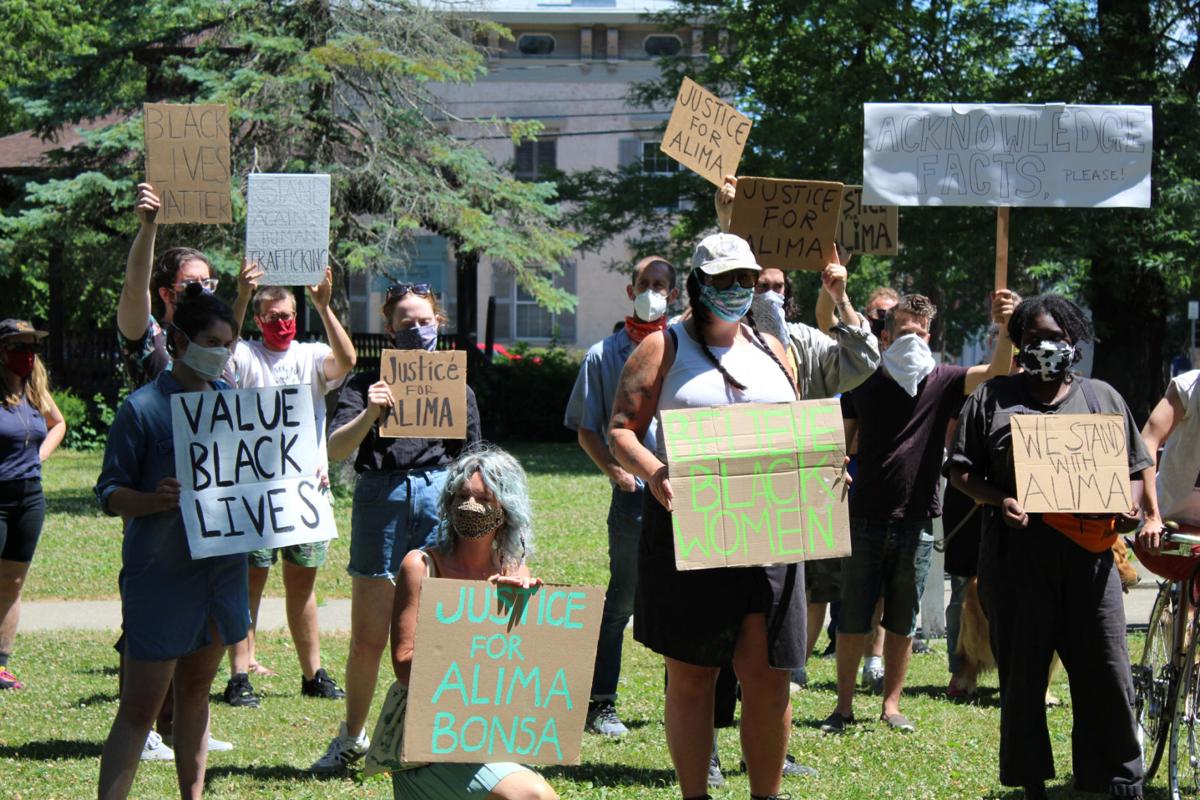 Matt Fortunato/Columbia-Greene Media Supporters gather in the park outside of the county courthouse in support of Alima Bonsa. 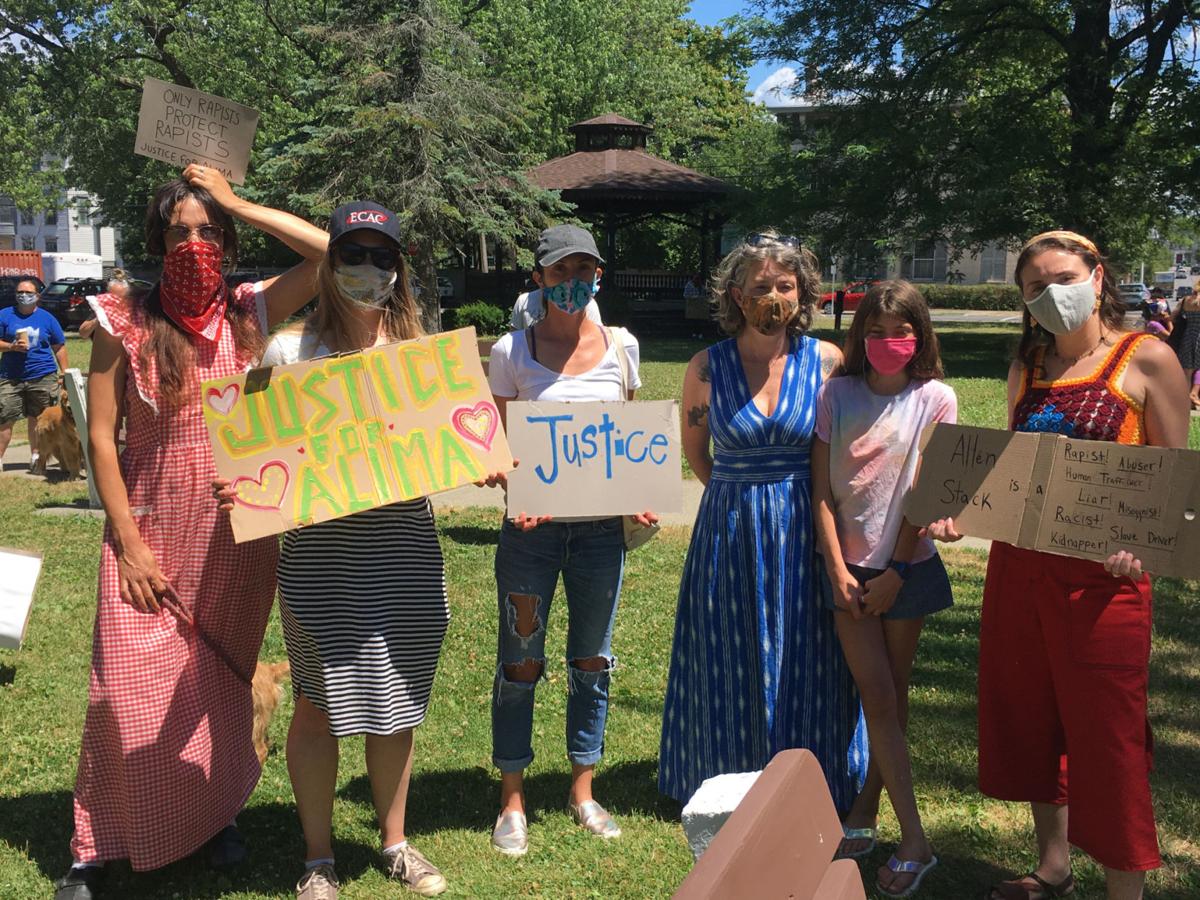 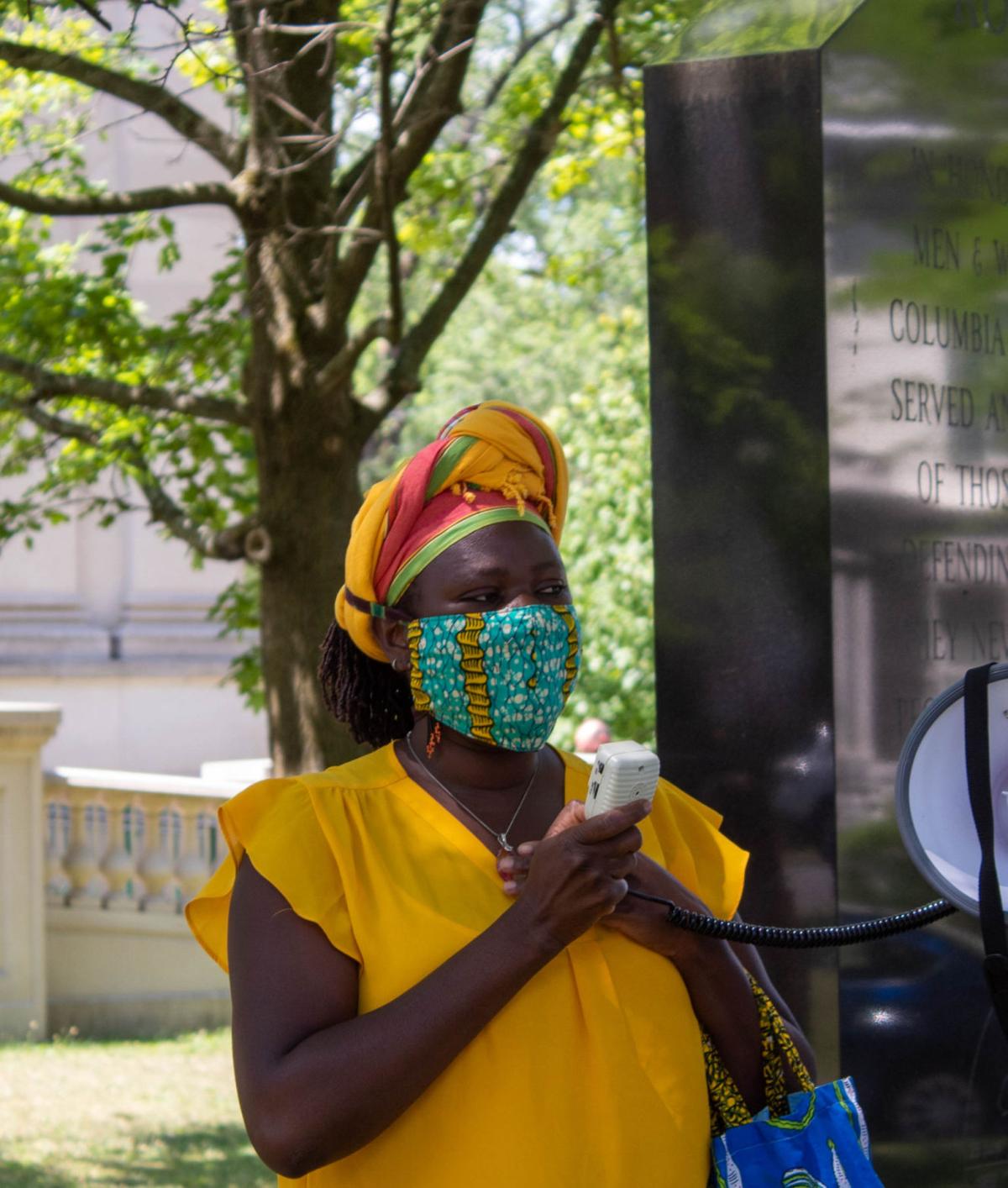 Contributed photo Alimata Bonsa addresses the crowd assembled in front of the Columbia County Courthouse Thursday before her custody hearing with her ex-husband, who she says kidnapped her from West Africa and brought her to America against her will.

Matt Fortunato/Columbia-Greene MediaBryan MacCormack speaks out in support of Alima Bonsa, who is in a custody dispute with her ex-husband and has made allegations of abuse.

Matt Fortunato/Columbia-Greene Media Supporters gather in the park outside of the county courthouse in support of Alima Bonsa.

Contributed photo Alimata Bonsa addresses the crowd assembled in front of the Columbia County Courthouse Thursday before her custody hearing with her ex-husband, who she says kidnapped her from West Africa and brought her to America against her will.

HUDSON — Nearly 100 people turned out at the park in front of the Columbia County Courthouse on Thursday to show their support for Alima Bonsa, the West African woman who alleges she suffered decades of abuse at the hands of a kidnapper.

Bonsa was at the courthouse in preparation for an appearance in family court that was scheduled for Thursday afternoon.

Bonsa is seeking custody of the three children she shares with her ex-husband Allen Stack, the man who she accuses of taking her from her home in the West African nation of Burkina Faso and bringing her to America against her will.

Bonsa alleges Stack paid to marry her when she was 18 years old, then subjected her to years of rape and other abuses. She alleges Stack moved her family to Faso Farm in Old Chatham in 2014 and forced her and her relatives to labor on the farm with no compensation. Bonsa called it a “plantation” at a press conference June 18.

Bonsa, who still lives at the farm, said she fears for her safety.

“I have to stand strong for my children, even though I am scared,” she said Thursday at the rally. Bonsa’s children are 7, 10 and 12.

Community members, many carrying signs calling for justice, descended on the courthouse lawn to show support for Bonsa after receiving word of the rally on social media from the Columbia County Sanctuary Movement.

“For 20 years I have been trying to fight on my own. Now I know I am not alone,” Bonsa said while addressing the crowd with a megaphone.

Bonsa expressed confidence that she would receive custody of her children. Some members of the crowd said they attended because of their own negative experiences with the county’s family court system.

Bonsa said she was moved to speak up and tell her story because “people need to know who [Stack] is.”

Stack’s 2016 doctoral dissertation sheds some light on his background. He graduated from Tulane University in 2000, where he minored in African studies and studied abroad in Ghana, according to the biography.

One year later, on Nov. 10, 2001, Bonsa alleges Stack forced her to marry him after removing her from her village with the permission of her uncle. She alleges that she was forcibly brought to the United States five months after the wedding.

Stack received a master’s degree in African politics and quantitative economics and theory in 2006 from the Johns Hopkins School of Advanced International Studies in Washington, D.C. He later attended Johns Hopkins University in Baltimore as a doctoral student in political science from 2010-16, according to the dissertation.

Stack thanked Bonsa and her relative, Victor Bonsa, in the acknowledgements section of his dissertation.

“Most of all, thank you to my love Alimatou, my wife, as well as to her namesake. What an honor it is to call Victor Bonsa my brother and to call his whole family my family,” Stack wrote.

Siba N’Zatioula Grovogui, who served as Stack’s principal advisor during the completion of his Ph.D., said he had “close to no knowledge” of the relationship between Stack and Bonsa.

Grovogui, a professor at Cornell University, declined to comment further, but he said he had occasionally interacted with the family.

“As far as I know, Allen was legitimately married, had children with his wife, adopted some of her relatives and brought his mother-in-law to live with them, first, in D.C. and then in New York,” Grovogui said in a statement.

Fourth Ward Hudson Supervisor Linda Mussmann, who addressed the crowd at the rally for Bonsa, said she had contacted Columbia County Sheriff David Bartlett about Bonsa’s case, but had not received a reply.

Mussmann called for a thorough investigation of the allegations against Stack.

“When our voices have been denied by law enforcement, by the courts, there is no other way,” McCormack said, addressing the crowd with a megaphone.

Ale Campos was moved to attend the rally after hearing Bonsa’s story.

“It felt like we have no excuse not to show up for something happening so close to home,” Campos said, adding that justice for Bonsa feels “tangible and possible.”

The Columbia County Sanctuary Movement was made aware of Bonsa’s case by the Worker Justice Center of New York and is working to support Bonsa and ensure that she has adequate legal assistance, MacCormack said.