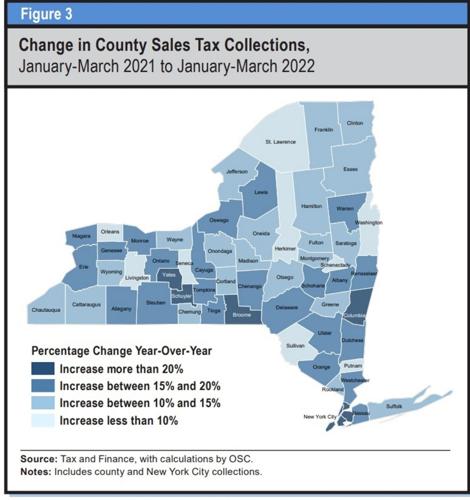 CATSKILL — Greene County sales tax revenue increased 10.7% in the first quarter of 2022, according to a report from New York State Comptroller Thomas DiNapoli.

The county collected $10.7 million in sales tax from January to March, up from the $9.6 million the county took in during the same period last year.

Greene County Administrator Shaun Groden said there was one clear explanation for the county’s growth in sales tax in the first quarter.

“Everything is more expensive, so sales tax exponentially goes up,” Groden said. “Look at gas, it’s $4.40 a gallon and a year ago it was $3.25. So that extra buck and a half is going to turn into more sales tax. Building supplies have gone up. Everything is up.”

Groden said the county should see even higher sales tax revenue in the summer tourist season.

“It’s seasonal,” he said. “We’re more of a destination, tourism-based county. So we haven’t started our season yet. Our highest sales tax collection months are usually June, July and August.”

Greene County Chamber of Commerce President Jeff Friedman attributed the county trailing the statewide increase of 21.1 percent in sales tax revenue to the previous sales success the county has seen since the start of the pandemic.

“New York City has been lagging way behind, but now that they’re starting to get a little more normalcy in their operations, I would have expected to see a significant increase in sales tax,” Friedman said.

Spike Priggen, owner of Spike’s Record Rack on Main Street in Catskill, said his record shop didn’t see an appreciable rise in sales in the first quarter after two years of explosive growth in the vinyl record industry.

“I don’t know if I have,” Priggen said of increased first-quarter sales. “My business more than doubled from 2020 to 2021. I don’t know about the first three months of this year. I don’t know if this is the best time of the year for record stores necessarily. But COVID seems to have been very kind to the record collecting hobby.”

DiNapoli’s report noted that inflation in the state hit a 40-year high in March.

“Local sales tax collections continue to come in strong,” DiNapoli said in a statement. “While local governments are collecting more, they are also dealing with some of the same increased costs that consumers and private businesses are. With prices rising, we’re watching closely to see what impact the rate of inflation and economic volatility is having on New York’s economic recovery.”