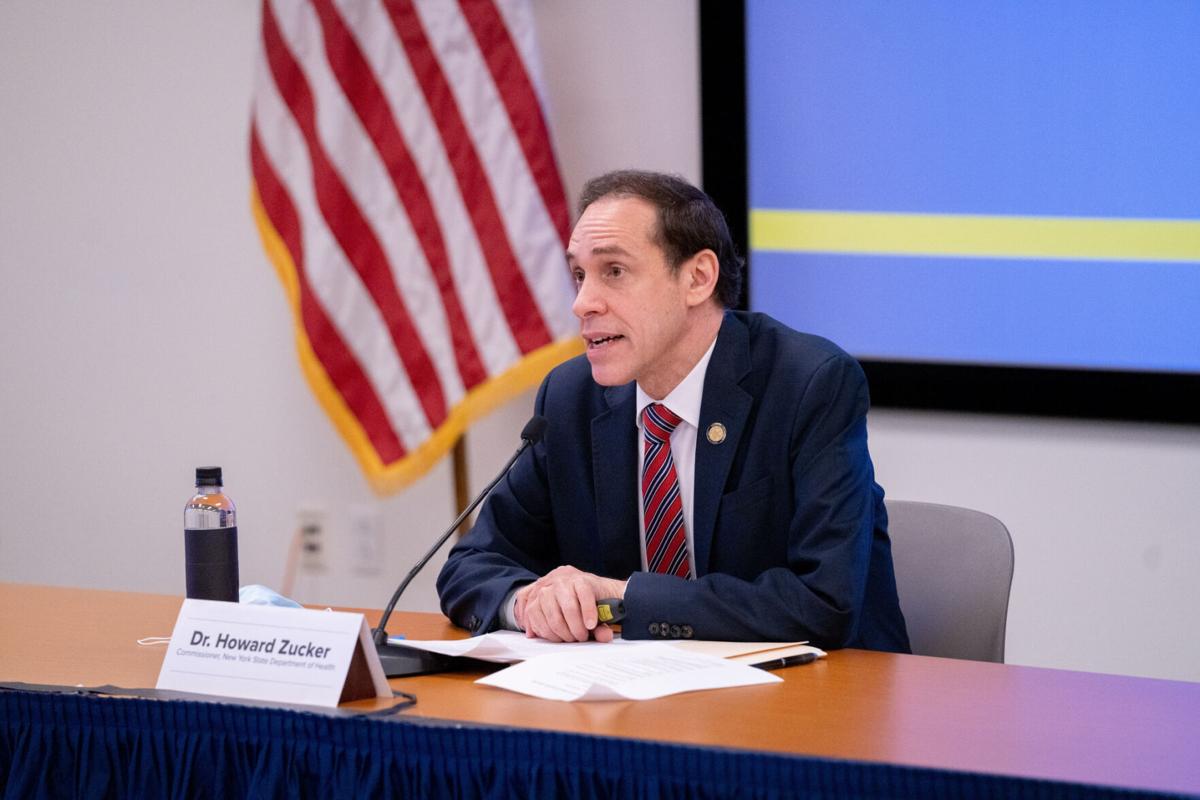 State Health Department Commissioner Dr. Howard Zucker delivers a briefing in Manhattan on July 6 on the department’s report following an investigation into controversy surrounding the state’s COVID-19 deaths in nursing homes and adult-care facilities. Courtesy of the state Department of Health 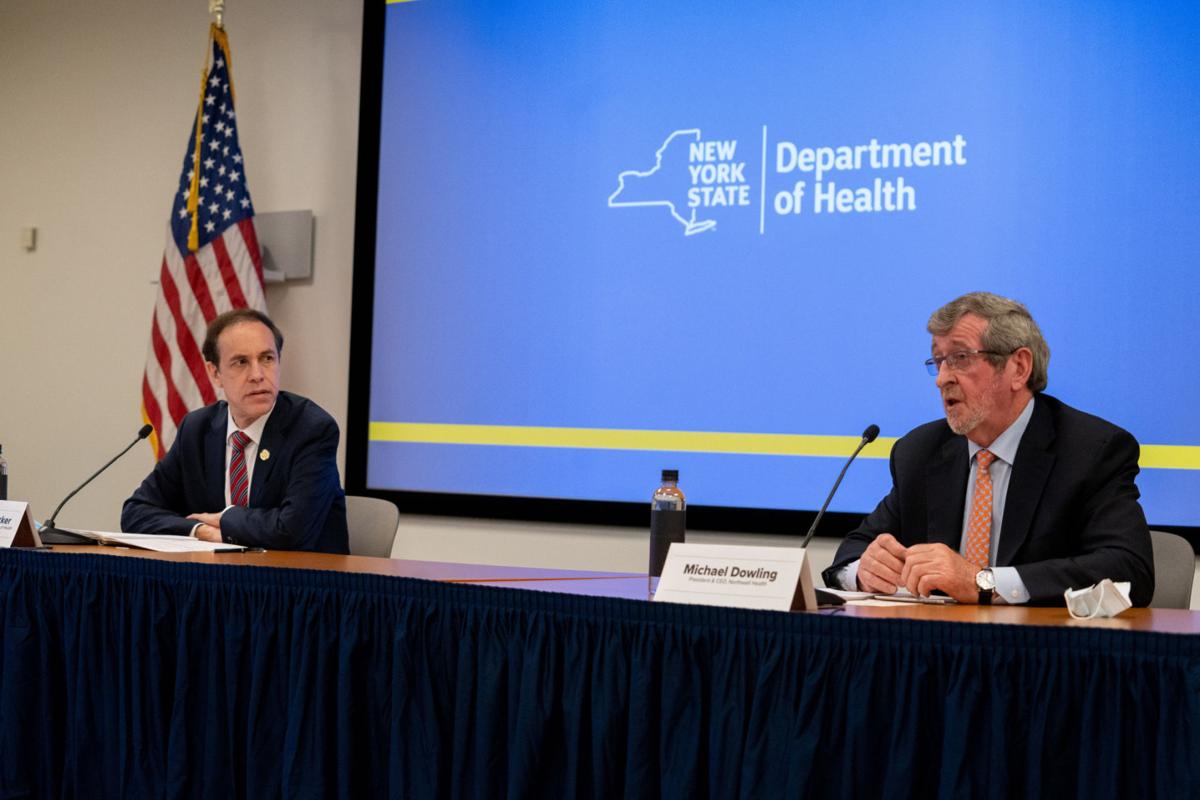 Courtesy of the state Department of Health Michael Dowling, president and CEO of Northwell Health, speaks Monday during the state Health Department’s briefing in Manhattan on a report into the state’s COVID-19 fatalities in nursing homes. 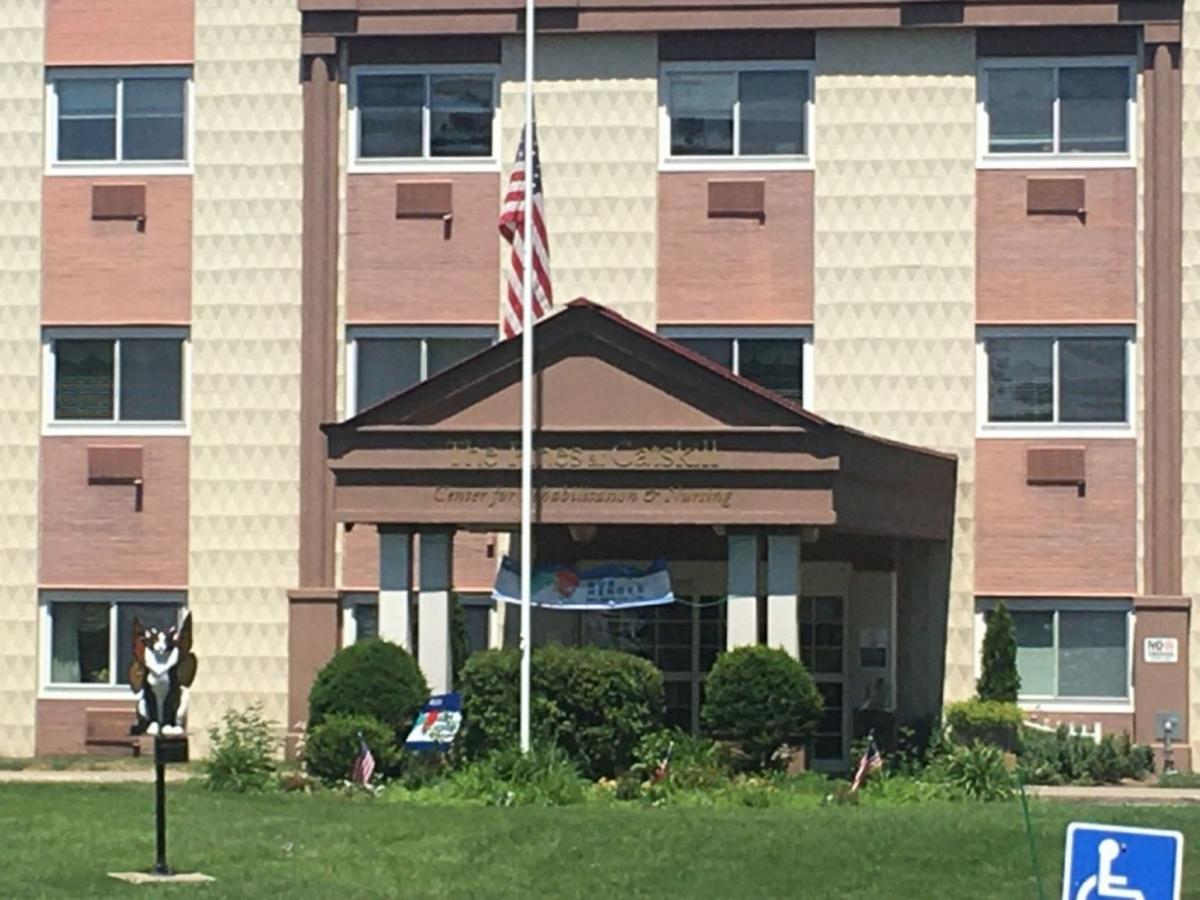 File photo The outside of The Pines at Catskill Center for Nursing and Rehabilitation in Catskill. The state Department of Health released a report Monday following an investigation into controversy surrounding the state’s COVID-19 nursing home fatalities.

State Health Department Commissioner Dr. Howard Zucker delivers a briefing in Manhattan on July 6 on the department’s report following an investigation into controversy surrounding the state’s COVID-19 deaths in nursing homes and adult-care facilities. Courtesy of the state Department of Health

Courtesy of the state Department of Health Michael Dowling, president and CEO of Northwell Health, speaks Monday during the state Health Department’s briefing in Manhattan on a report into the state’s COVID-19 fatalities in nursing homes.

File photo The outside of The Pines at Catskill Center for Nursing and Rehabilitation in Catskill. The state Department of Health released a report Monday following an investigation into controversy surrounding the state’s COVID-19 nursing home fatalities.

Thousands of COVID-19 deaths inside New York nursing homes stemmed from infected workers and visitors introducing the coronavirus into the vulnerable facilities. To date, at least 6,281 people have died inside New York nursing homes in connection to COVID-19, or about 25% of the state’s more than 24,900 overall deaths. More than 101,000 residents live in one of 613 nursing-home or adult-care facilities in the state.

Nursing-home staff and visitors brought the disease into statewide adult-care facilities, according to the DOH report. A person with COVID-19 is contagious for up to nine days, state Health Department Commissioner Dr. Howard Zucker said, and often “shed” the virus or transmit it to others before they become symptomatic.

“Many worked right up to the point where their symptoms were evident,” Zucker said Monday morning during a briefing on the report in Manhattan. “A retrospective analysis shows the earliest reported staff illness was Feb. 24. Despite our best efforts, COVID-19 continued to spread in nursing homes.”

Monday’s Health Department report came amid mounting calls by state and federal lawmakers for an independent investigation of COVID-19 deaths in New York nursing homes. Officials and lawmakers have criticized a March 25 Health Department memo that mandated nursing homes cannot discriminate against residents by not readmitting people who test positive for the coronavirus, saying infected nursing home patients brought the virus with them when they returned to the facility, or home, to recover.

“It’s important to remember that sometimes what happens is a narrative gets perpetuated when it’s not based in facts,” Zucker said. “This has been a nationwide challenge since the beginning of the crisis.

“The false narrative was a resident who had COVID brought it back from the hospital to the nursing home. The data does not support that.”

“We didn’t know,” he said of the virus’ initial transmission to New York from European travelers in January and February. “No one knew this virus was here when it was here.”

“That’s 23 days after the peak in the nursing homes,” the health commissioner added. “The average span of time from infection to death was 18-25 days, and that showed a 23-day period.”

“It occurred the other way around,” Zucker said. “When you look at the curve, you will see as the admission of residents was increasing the deaths was decreasing. If the policy was the direct driver in deaths ... the peak in admissions would precede the peak in deaths. It’s just the statistics and mathematics of it.”

“Taking this into account, what we see is the length of hospital admission when patients were prehospitalized after the incubation of this virus,” he explained during Monday’s briefing. “We know a lot more now in July than we knew at the time these decisions were made in March. While these decisions turned out to be excellent ones in retrospect, how we can continue to enhance the safety and vulnerability to COVID-19 in New York state?”

About 37,000 health care workers of 158,000, or about 1 in 3 employees who work in New York nursing homes were infected with COVID-19, according to the report. About 20,000 infected nursing home workers were known to be COVID-positive by the end of the month of April.

Under state law, New York nursing homes can house people with coronavirus, but only when the facility can provide the appropriate isolation space, PPE and care. If not, the infected residents are transferred to COVID-19-only facilities across the state. In late April, Gov. Andrew Cuomo directed the state Health Department to investigate how the effectively the state’s 600-plus nursing homes were implementing COVID-19 protocols and procedures.

He also blamed the Trump administration and federal Centers for Disease Control and Prevention for failing to properly warn state officials about the spread of COVID-19 from China to Europe to the U.S.

“Nobody knew what they were talking about for a long time, that’s the bottom line here and the federal government was just plain wrong,” Cuomo said during a pandemic briefing in Manhattan. “...I don’t do global pandemics. I don’t trace China. I don’t trace European infections. It’s not what I do. I don’t do international health monitoring. That was their job.”

Cuomo’s administration and the state Health Department have deflected accountability for the thousands of lives lost to COVID-19 in state nursing homes, Assembly Minority Leader Will Barclay said in a statement Monday.

“To the surprise of absolutely no one, they have now presented a report that continues to promote their pass-the-buck narrative,” said Barclay, R-120. “State health officials have a responsibility to analyze and learn from the COVID-19 pandemic in order to better prepare for future crises. However, in no way does this report replace the need for a full, public accounting and independent investigation into what happened in nursing homes and adult care facilities across the state.”

Barclay encouraged the state to discuss its findings with lawmakers and independent investigators to ensure accuracy.

“Instead of swiftly acting to protect our most vulnerable, Cuomo and his health commissioner did nothing,” Ortt said Monday. “At the start of the crisis, the Cuomo administration fixated on holding daily briefings to gain national attention while our seniors in nursing homes were an afterthought.

...The Cuomo administration’s failure to accept responsibility for their disastrous response has been outrageous, but to blame family members who have suffered devastating losses – who were not even able to say goodbye at funerals – is the ultimate low.”

“But not Cuomo or a single Democrat did anything,” Ortt said. “An independent investigation is needed to understand what went wrong to provide answers to families and to help our nursing homes deal with infection control, not a report issued by the Cuomo administration and their allies.”

“New York did exceptionally well comparatively speaking to other states and internationally, but the central point is that those who claim the admission of nursing home patients from hospitals ... caused the fatalities is not supported by the facts,” Dowling said. “Facts matter. You make policy based on fact — Not on assumption and opinion.”

Senior citizens and people with underlying conditions are the most vulnerable to become seriously ill when infected with COVID-19. Congregate settings such as nursing homes serve as breeding grounds for the virus, officials have said. Cuomo has compared a virus outbreak in a nursing home “like fire through dry grass” several times during his pandemic briefings.

The state had its first confirmed COVID-19 case March 1. Visitation was suspended in nursing and group homes March 15.

The state solely relied on CDC guidance on the coronavirus in January and February, Secretary to the Governor Melissa DeRosa said Monday.

“New York had no COVID-positive cases at that time,” she said. “For the entire month of February, we now know COVID was in existence in New York City. They have to assume because it was in the general population, it was walking through the front door.”

The state sent millions of pieces of personal protective equipment, including gloves, gowns and face masks, to nursing-home and adult-care facilities, Zucker said. Cuomo implemented an executive order May 10 requiring all nursing home staff be tested for COVID-19 twice per week and mandating hospitals not release a virus patient to a nursing home unless that person tests negative.

No one is to blame for New York’s thousands of virus fatalities in general, or in nursing homes, Zucker said, as officials did not know sufficient information about the disease and continue to learn as the pandemic progresses.

“We need to look at this from a moment in time,” the commissioner said. “We have to go back to that point in time not knowing the knowledge we have subsequently gained ... that was not fully known in March.

“Unfortunately, we did not understand the disease early on. We didn’t understand the spread ... and it was able to be spread to a vulnerable population in our community. It is unfortunate, it is sad, but it is true: 81% already had COVID-19 in the nursing homes. There is no reason to place blame. Blame the coronavirus COVID-19.”