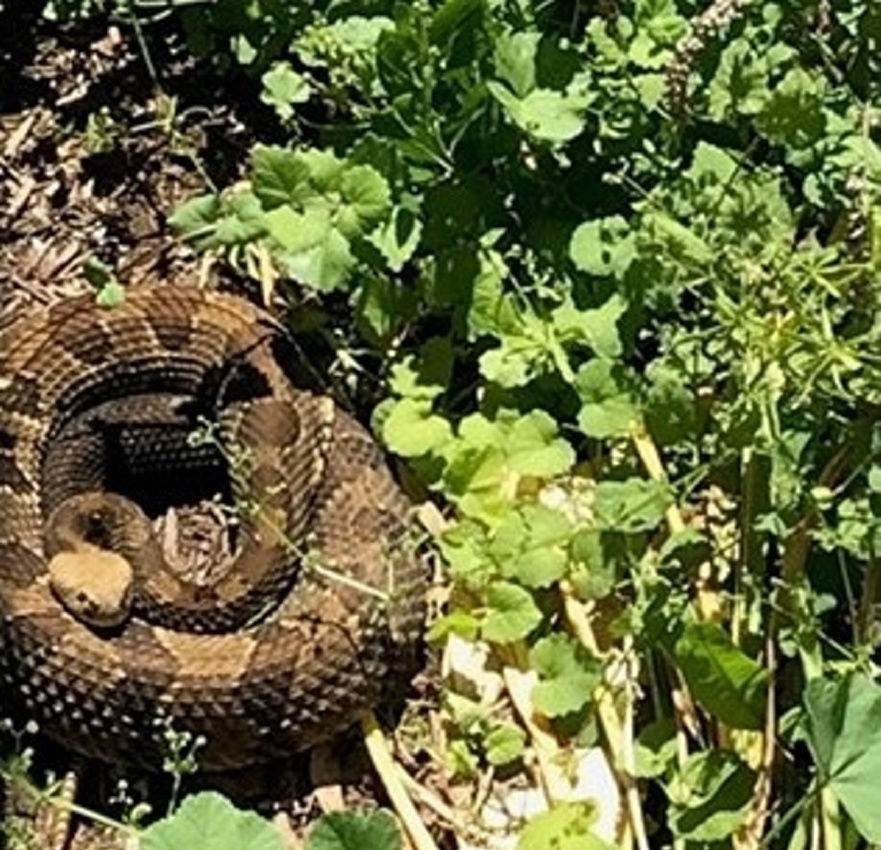 Contributed PhotoThe timber rattlesnake that was relocated from a Copake home. 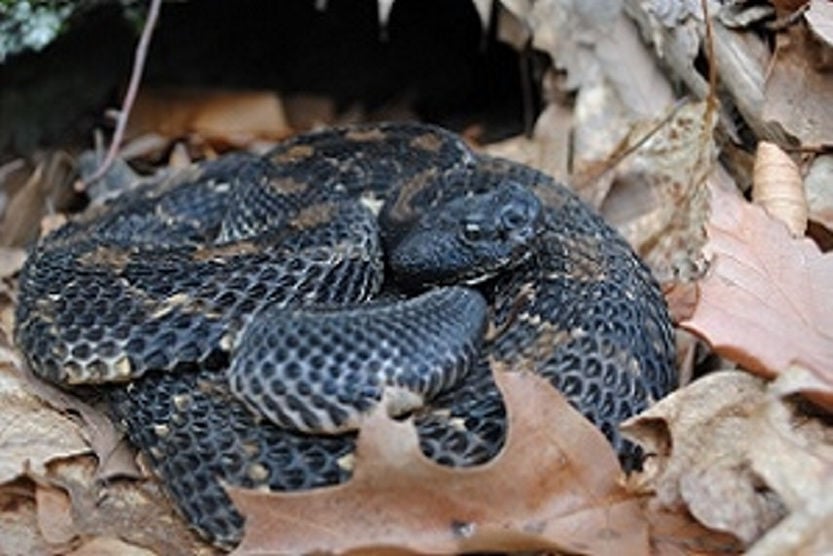 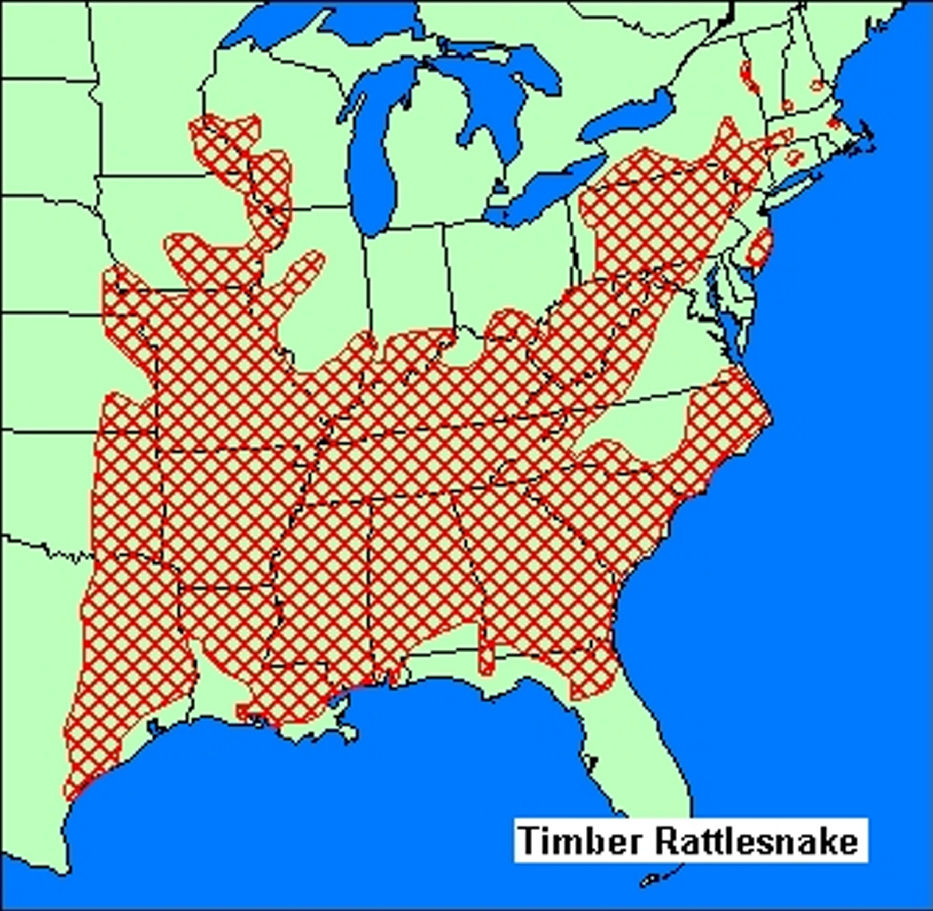 Courtesy of the New York State Department of Environmental ConservationMap shows where timber rattlesnakes live in the eastern United States.

Contributed PhotoThe timber rattlesnake that was relocated from a Copake home.

Courtesy of the New York State Department of Environmental ConservationMap shows where timber rattlesnakes live in the eastern United States.

COPAKE — A stray timber rattlesnake that found its way to a Copake home was returned to the wilderness by New York State Department of Environmental Conservation officers, DEC spokesman Kevin Frasier said.

Conservation Officer Jeff Cox received a call on June 20 from a concerned homeowner in Copake reporting a large rattlesnake on the front porch, after which, the homeowner sent pictures of the pit viper, confirming it was a timber rattlesnake, Frasier said.

The rattlesnake appeared to come and go over the weekend before slithering under the house, causing the homeowner to worry it was taking up residence there, Frasier said.

After consulting with wildlife staff, DEC officers decided to trap and relocate the rattlesnake.

After a few unsuccessful attempts, Cox was able to get the rattlesnake into a container on the morning of June 24, Frasier said.

The rattlesnake was transported to a location in the Taconic Mountains, which is a known den site, and released unharmed, Frasier said.

Rattlesnakes have been around parts of this region for centuries, said Donna Peterson, program coordinator for Cornell Cooperative Extension of Columbia County.

They live mainly in the high terrain and prefer remote, rocky areas where they can bask in the sun, Peterson said.

Snakes tend to show up in residential areas during dry periods, looking for moisture and water, Peterson said.

Most people who live within timber rattlesnake territory in New York will never see one, because they are not an aggressive species, Frasier said.

The snakes would much rather be left alone and are actually a benefit to our area by preying on mice and other rodents they help reduce the tick population, Frasier said.

Their venom, which is used primarily to immobilize prey, can be fatal to humans if the bite is left untreated. But in New York there have been no records of human deaths attributable to rattlesnakes in the wild during the last several decades, Frasier said.

“You are most likely to come in contact with a timber rattler while hiking in the woods,” Peterson said. “You can avoid them by being alert with sight and smell. The timber rattler gives off a light cucumber smell, and tends to make noise as it moves through leaves and brush, or shakes its ‘rattle’ tail.”

“For your safety, you should always carry a walking stick when hiking, as it helps put some distance between you and any wild animal,” Peterson said.

In 2009, timber rattlesnakes were found in Greene County, in the Kaaterskill Clove, and in 2010 they were found between Plateau Mountain and Silver Hollow near the ledges, Frasier said.

“If you come across a timber rattlesnake in the wild you must give a minimum of a 10-foot distance between yourself and the snake and never attempt to handle, harass or provoke the snake in anyway,” Frasier said. “Simply give it space.”

DEC encourages the public to leave these snakes alone, and not harass, kill or handle them. When hiking, stay on marked trails and footpaths, keep pets leashed, avoid brushy areas and watch where you step. It is also a good idea to wear appropriate footwear when walking in the area, such as hiking boots or sneakers, Frasier said.

The Columbia-Greene Humane Society has not been involved in any cases involving timber rattlesnakes, Humane Society President Ron Perez said, although on a personal note, Perez said he has come in contact with them twice: Once was while hiking in the Adirondacks, and the other while refurbishing a house in Stuyvesant in the 1980s when he found one living under a porch.

Timber rattlesnakes can measure from 3 feet to almost 5 feet or more in length, Frasier said. The timber rattlesnake is the largest venomous snake in New York state. The record length is 74.5 inches.

The timber rattlesnake is listed as a threatened species in the state of New York due to habitat loss and indiscriminate killing, Frasier said.