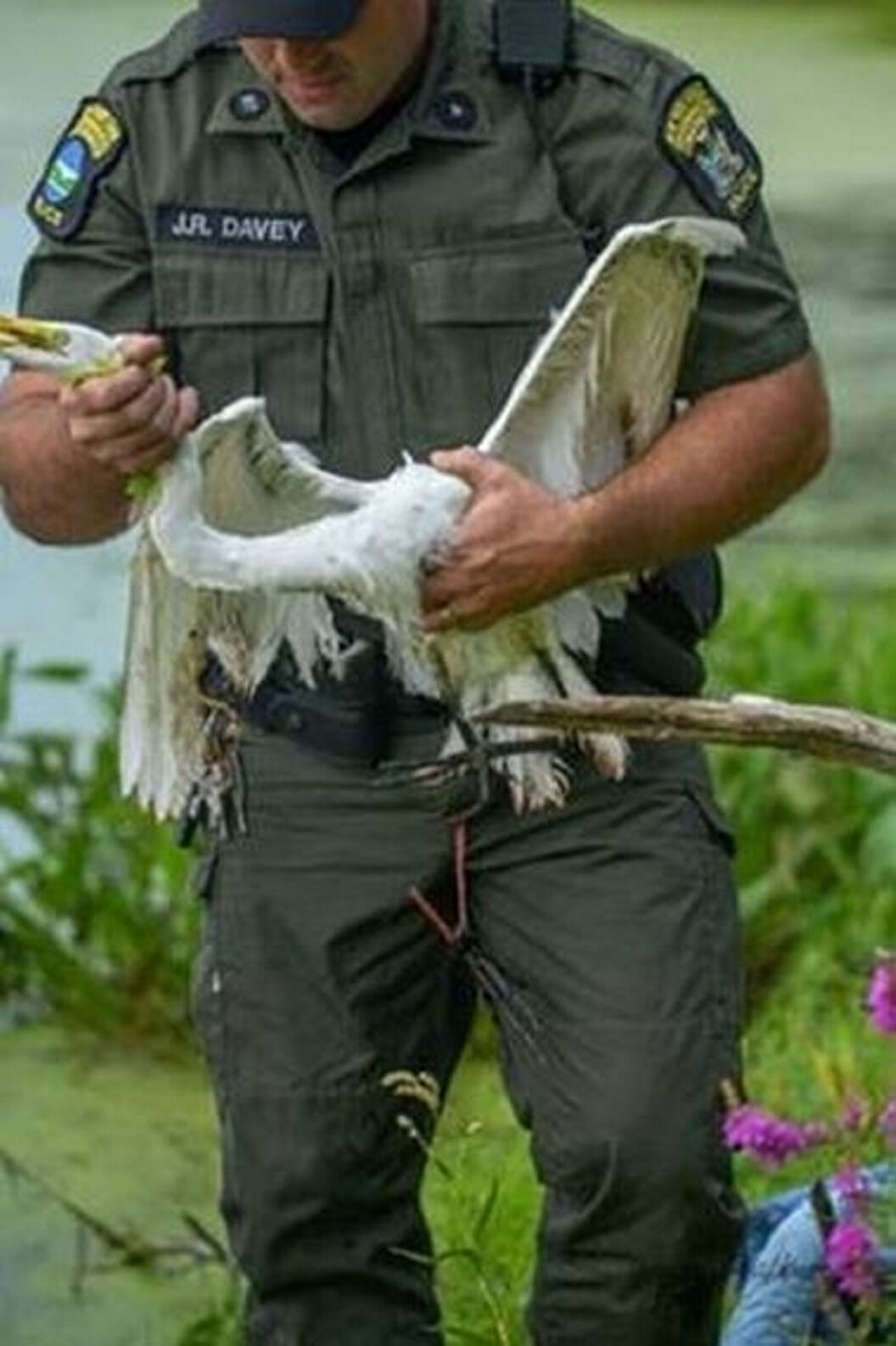 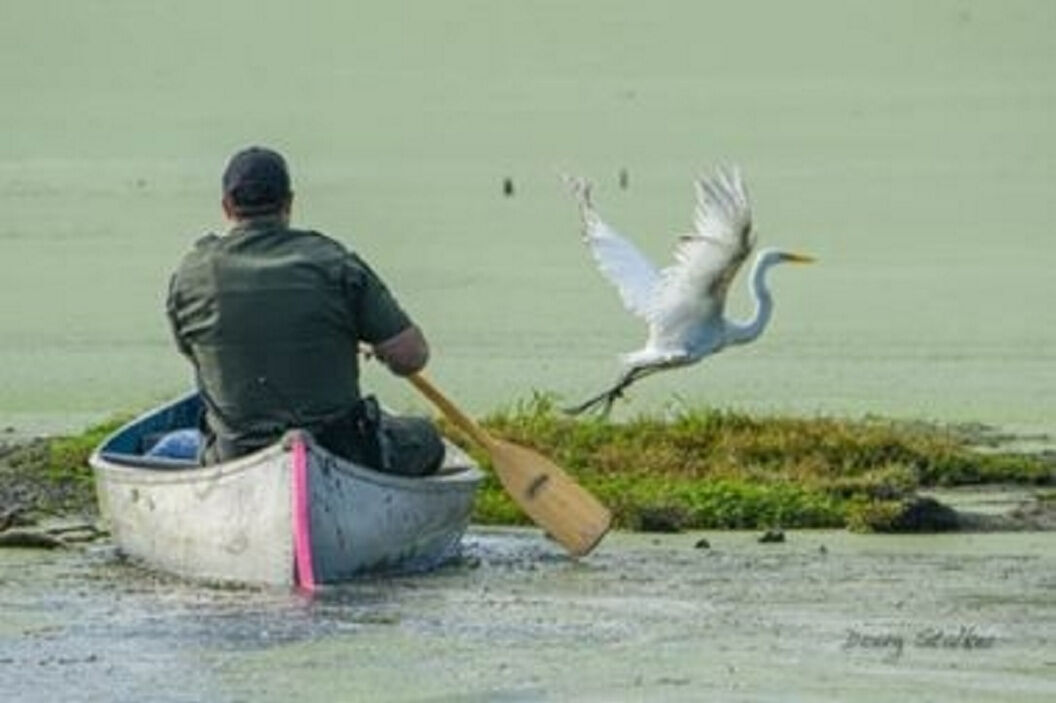 Even with a broken leg, the Great Egret tries to escape capture. Contributed photo 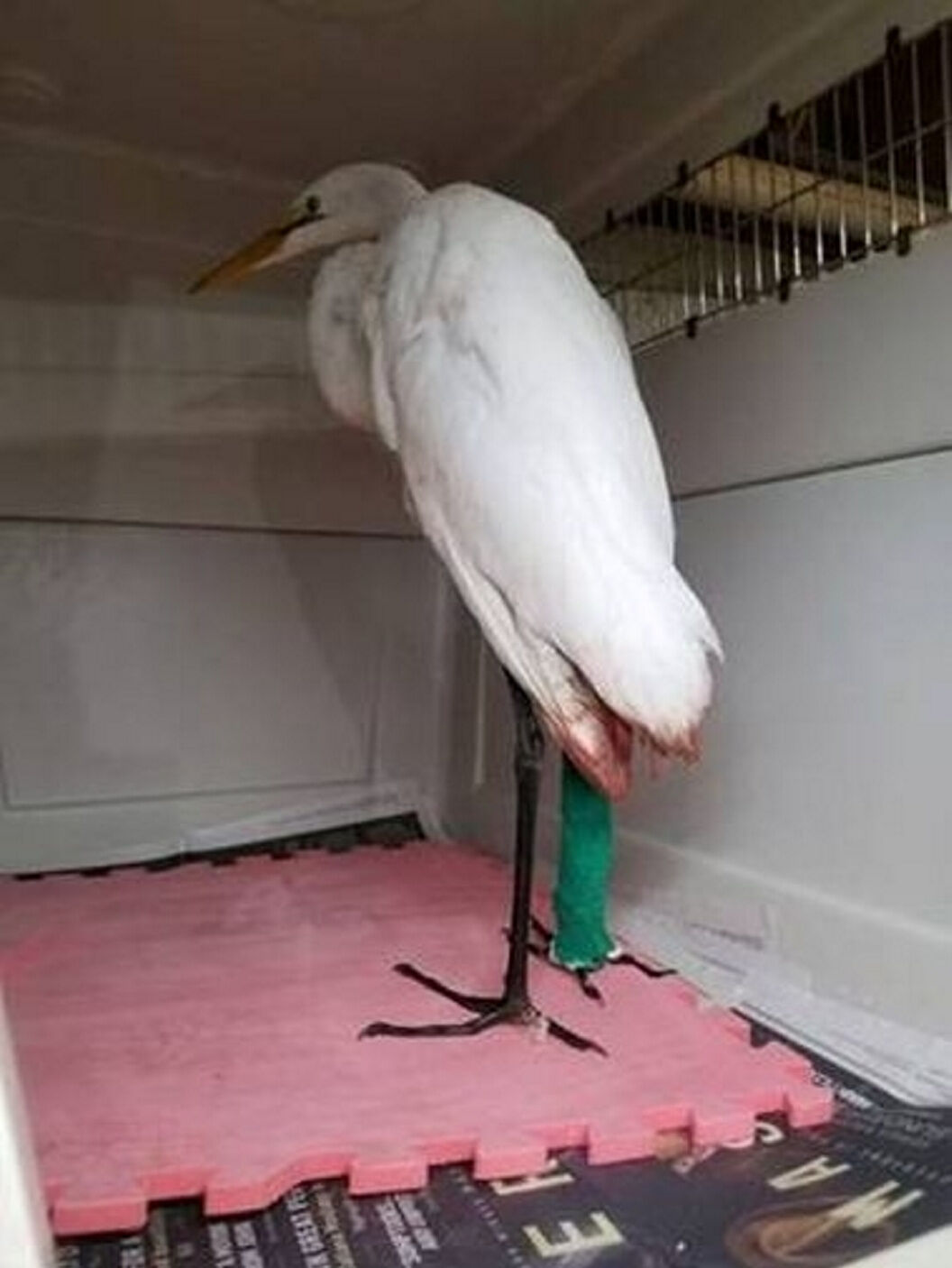 The injured egret with a brace on its leg, placed by Friends of the Feathered and Furry Wildlife Center in Hunter. Contributed photo

Even with a broken leg, the Great Egret tries to escape capture. Contributed photo

The injured egret with a brace on its leg, placed by Friends of the Feathered and Furry Wildlife Center in Hunter. Contributed photo

CHATHAM — A rare Great Egret is recovering from a severely broken leg at a wildlife rehabilitation center in Hunter after it was rescued in Chatham, Department of Environmental Conservation spokesman Jomo Miller said Friday.

The injured bird was taken to Friends of the Feathered & Furry Wildlife Center after it was rescued from Sutherland Pond at Ooms Conservation Area in the town of Chatham.

Environmental Conservation Officer James Davey received a report Aug. 24 of an injured Great Egret at Sutherland Pond and worked out a plan with some concerned citizens to rescue the bird.

Davey used a canoe to reach the injured bird, which was located well offshore, Miller said. After several attempts, Davey managed to grab the wading bird, while avoiding its sharp yellow bill, and returned to shore.

The egret was turned over to Friends of the Feathered and Furry Wildlife Center where staff fitted a brace on the bird’s leg to stabilize the fracture. The bird will undergo rehabilitation and be released back into the wild at a future date, Miller said.

Great Egrets are not commonly found in upstate New York. They normally can be found along the Gulf Coast, and along the East Coast, as far north as North Carolina, according to the National Audubon Society.

But after breeding season in late summer, the birds can often wander farther north.

The Great Egret was nearly wiped out in the United States in the late 1800s, when its feathers were sought for use in fashion. Their population rebounded after early conservationists began to protect the bird’s colonies.

As a result of that action, the Great Egret became the symbol of the National Audubon Society.

About 25 years ago, Friends of the Feathered & Furry Wildlife Center established a “second chance” animal haven on Route 23A in Hunter.

The center is run by Licensed Wildlife Rehabilitator Barbara ”Missy” Runyan, who has been saving helpless animals brought to the center from all areas of the state.

The center is all volunteer and relies on donations to stay afloat, according to its website.

“Not all animals can be saved, but remarkably most are rehabilitated and released back to their wild habitats; those who are less fortunate are no longer meant to suffer,” Runyan said.

The center is the subject of several books by author Elaine Warfield, a celebrated nature photographer known for her popular book, “Whispered Dreams of Pretty Horses.”

The Great Egret forages for food, mostly by standing or walking in shallow water. It waits for fish to approach, and then catches them with rapid thrust of its bill, according to the National Audubon Society.

The bird survives on a diet of mostly fish, but will also eats crustaceans, frogs, salamanders, snakes and aquatic insects.

The area in which the injured bird was rescued, Ooms Conservation Area, features 2.9 miles of trails, on 180 acres of land and is owned by the Columbia Land Conservancy.

The conservation area is named after two families who have been in the area for generations, according to the CLC website.

The pond is named after the Sutherland family, who lived across the road from the conservation area in the 1800s. In the 1950s, the Ooms family began a dairy operation on the fields surrounding the pond.

In 2001, CLC, in conjunction with the Open Space Institute, purchased the land from the Ooms family to permanently ensure its availability to the public, according to CLC.