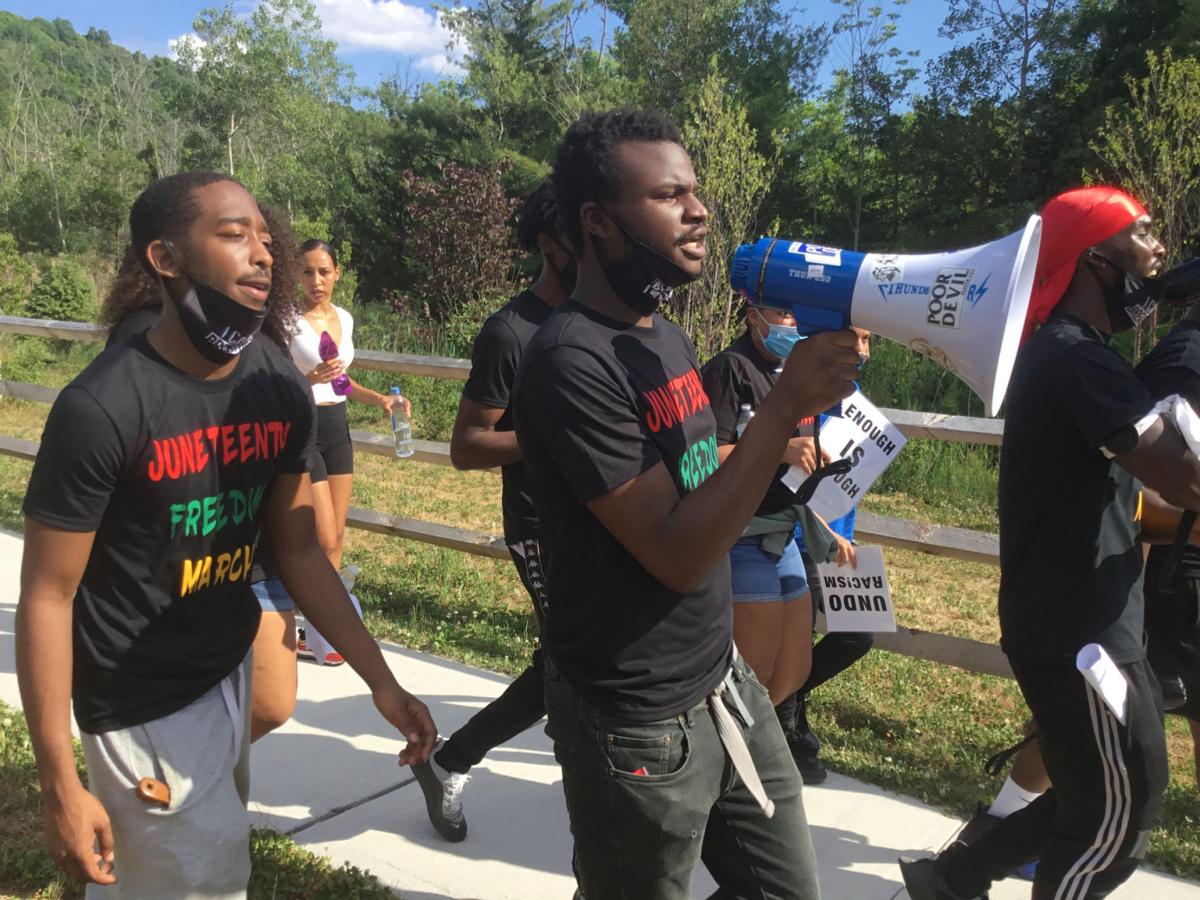 Melanie Lekocevic/Columbia-Greene MediaOrganizers of the Juneteenth Freedom March lead the way from the Columbia County side of the Rip Van Winkle Bridge. 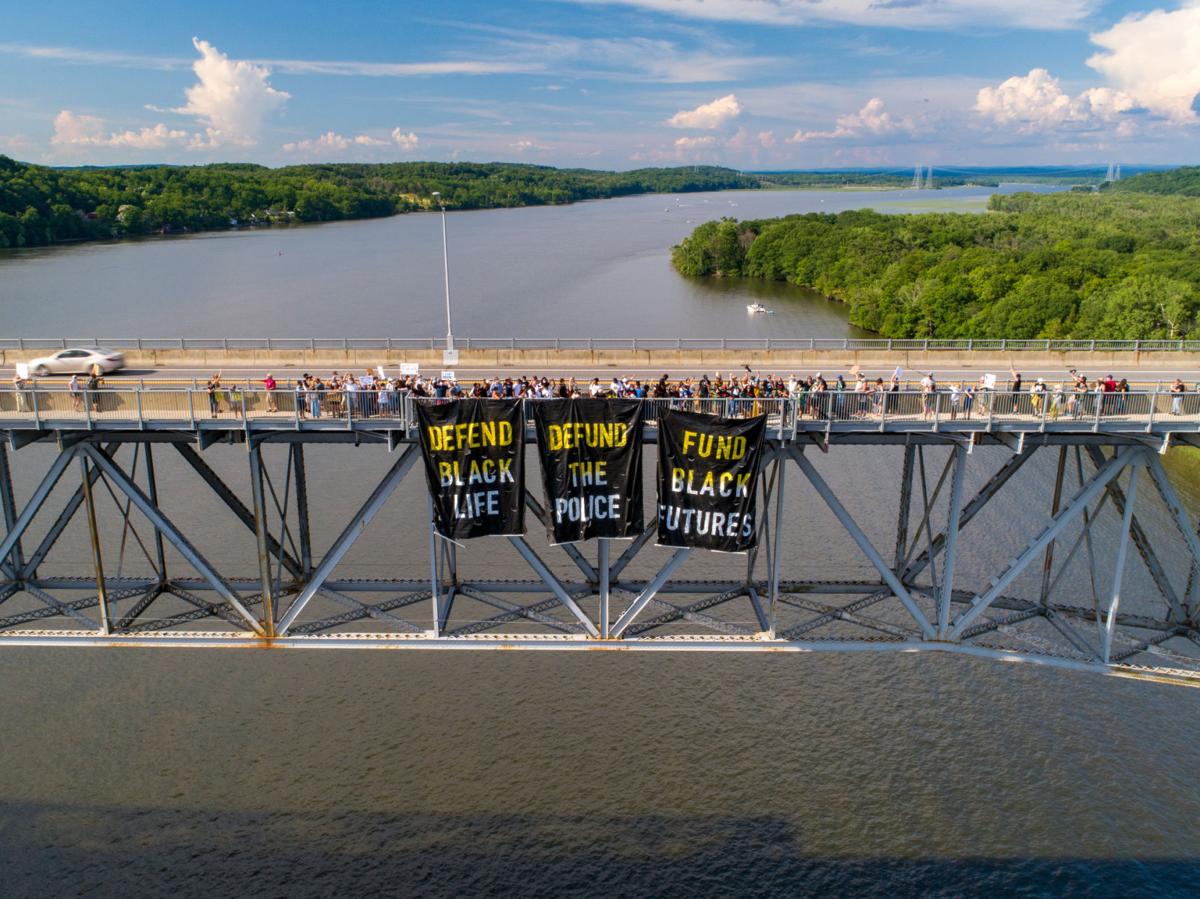 Courtesy of Alon Koppel PhotographyMarchers make their way across the Rip Van Winkle Bridge, sharing their message, during the Juneteenth Freedom March on Saturday. 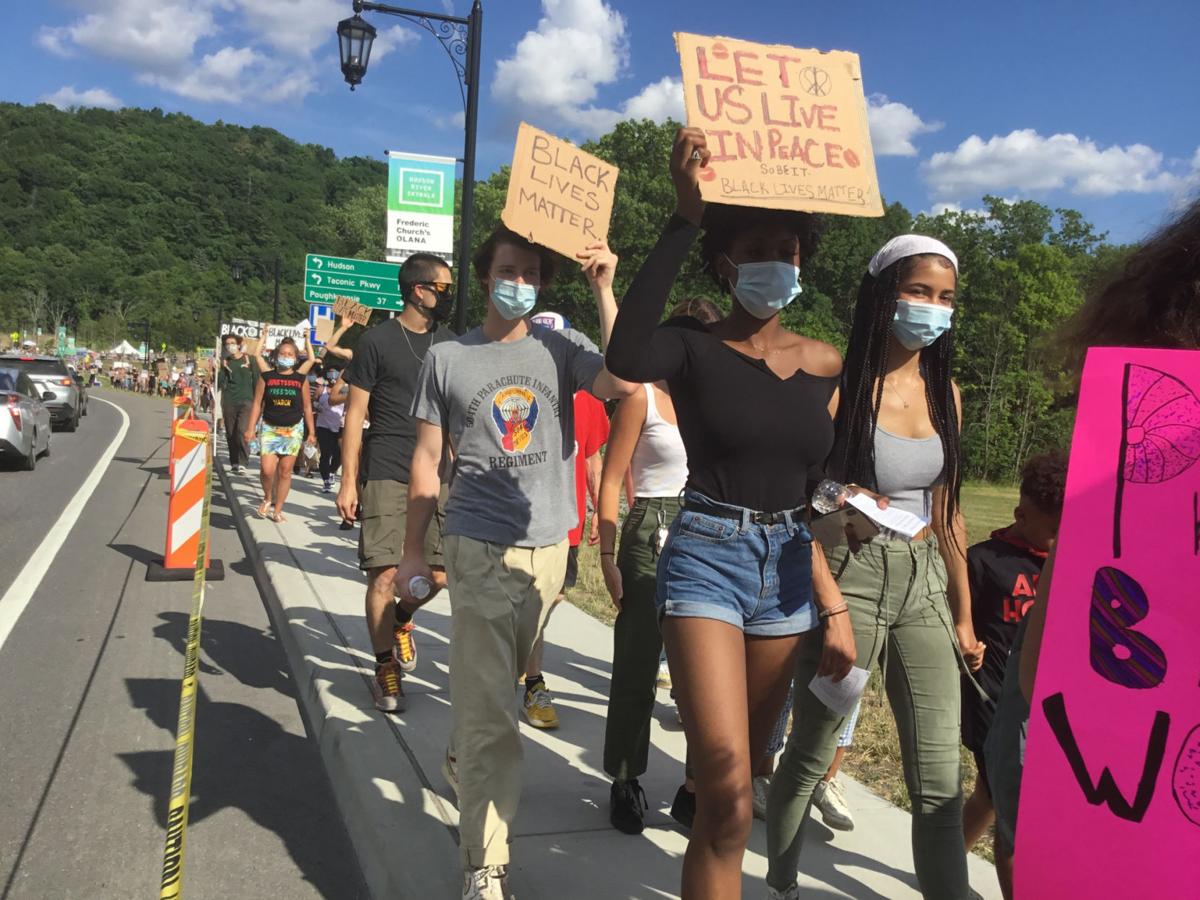 Melanie Lekocevic/Columbia-Greene MediaMore than 1,000 marchers packed onto the Rip Van Winkle Bridge on Saturday in a peaceful protest in the Juneteenth Freedom March. 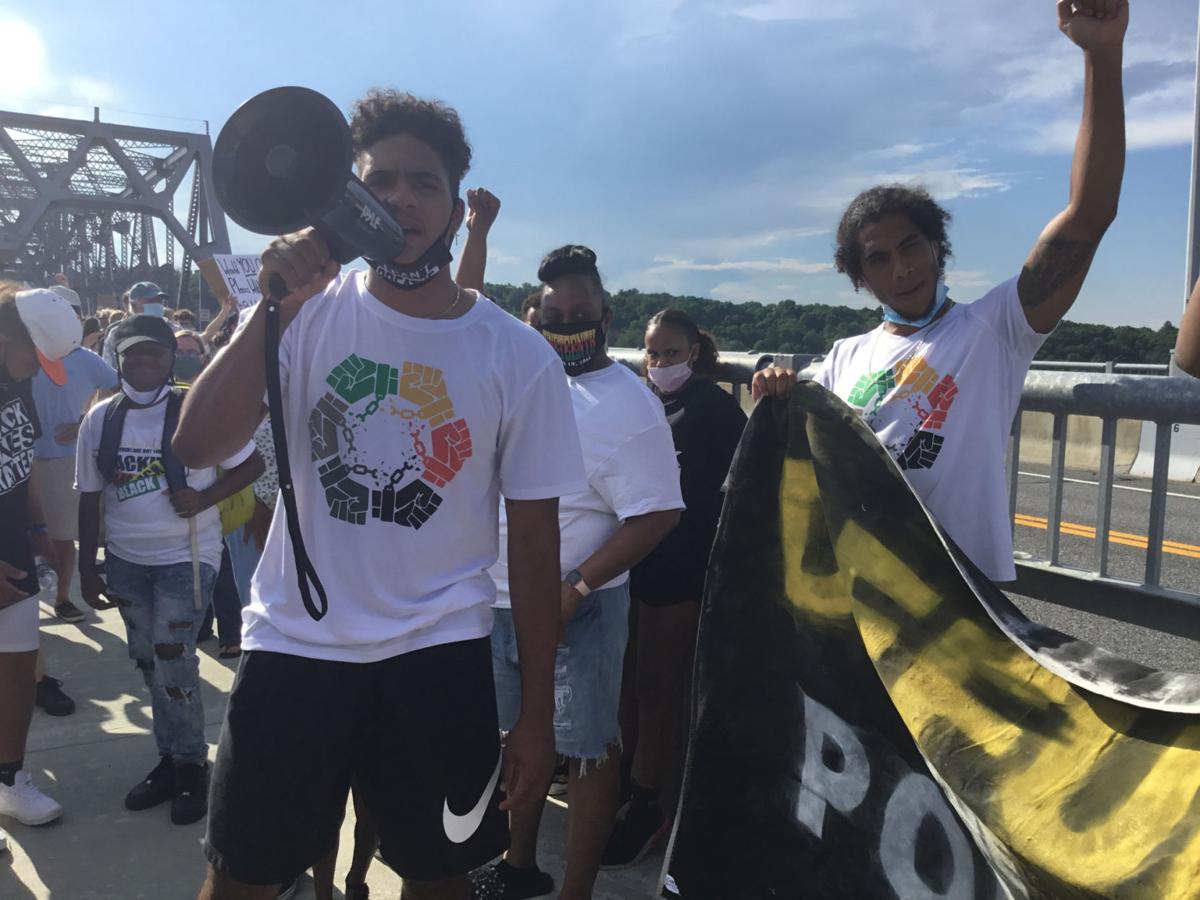 Melanie Lekocevic/Columbia-Greene MediaMarch organizer Justice Brantley rallies the crowd that spanned the length of the bridge as drivers honked and cheered them on. 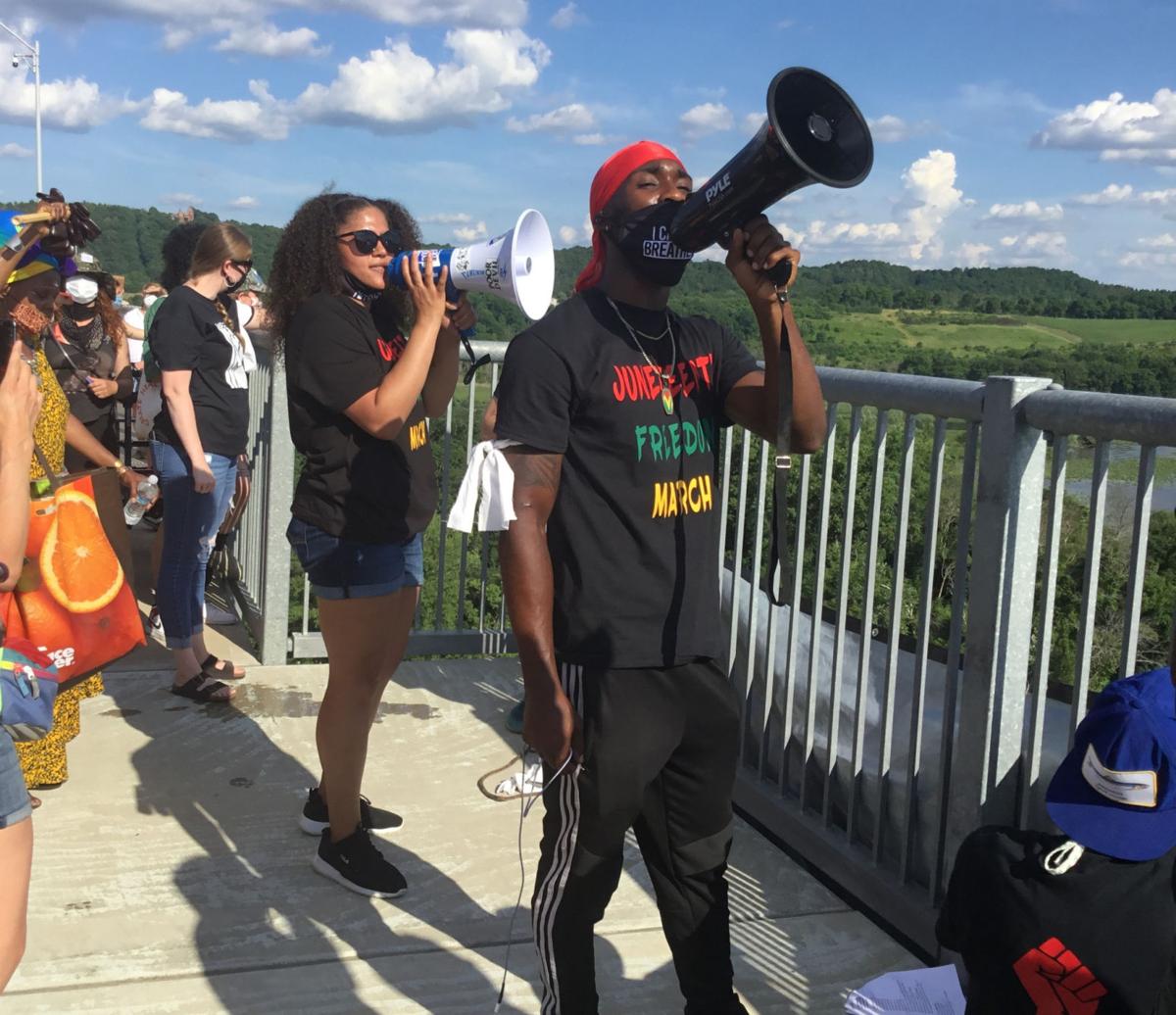 Melanie Lekocevic/Columbia-Greene MediaMarchers from both sides of the river met in the middle of the bridge to voice their opposition to racism and the treatment of African-Americans by some police. 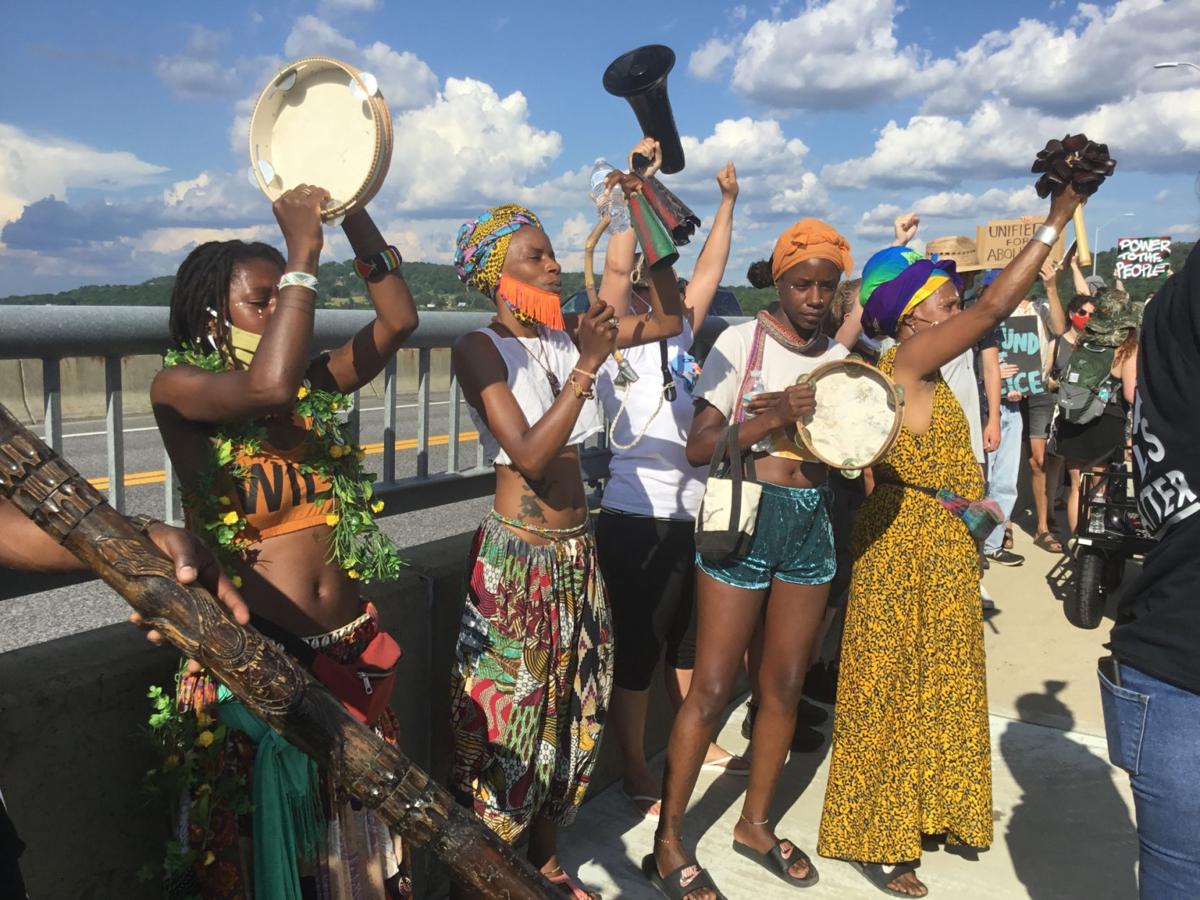 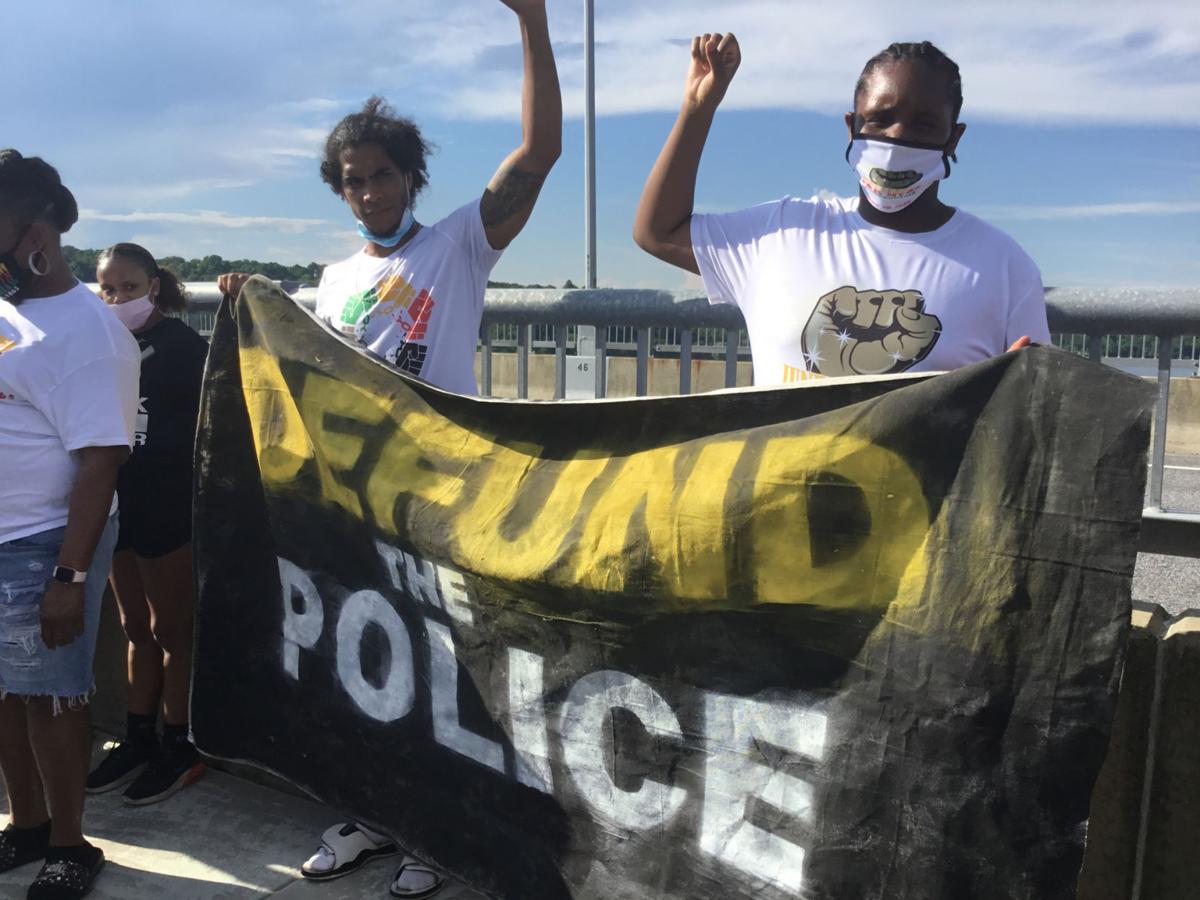 Melanie Lekocevic/Columbia-Greene MediaOrganizers of the Juneteenth Freedom March lead the way from the Columbia County side of the Rip Van Winkle Bridge.

Courtesy of Alon Koppel PhotographyMarchers make their way across the Rip Van Winkle Bridge, sharing their message, during the Juneteenth Freedom March on Saturday.

Melanie Lekocevic/Columbia-Greene MediaMore than 1,000 marchers packed onto the Rip Van Winkle Bridge on Saturday in a peaceful protest in the Juneteenth Freedom March.

Melanie Lekocevic/Columbia-Greene MediaMarch organizer Justice Brantley rallies the crowd that spanned the length of the bridge as drivers honked and cheered them on.

Melanie Lekocevic/Columbia-Greene MediaMarchers from both sides of the river met in the middle of the bridge to voice their opposition to racism and the treatment of African-Americans by some police.

Two protest marches from both sides of the Hudson River merged as one Saturday in a show of unity and the search for justice.

Organizer Michael Alert worked with Kaya Weidman and Jalal Sabur from the youth advocacy group Kite’s Nest, as well as local youth in Columbia and Greene counties, to hold the Juneteenth Freedom March across the Rip Van Winkle Bridge on Saturday.

“This Juneteenth Freedom March symbolizes the importance of Juneteenth,” said co-organizer Jahnessa Mackey. “It is the official holiday of when the last slaves were freed from Texas.”

The rally was also designed to bring together the two counties in a show of unity.

“There has been a long history of rivalry between the two counties, and this symbolized that whatever is between us doesn’t matter as much as black lives do,” Mackey said.

While it is unknown if a rally will be held every year commemorating Juneteenth, there are plans in the works to hold an event of some kind honoring the holiday in Hudson each year, Mackey said.

“It was a wonderful display of solidarity that was put together between youth from both counties,” Johnson said. “I couldn’t be more proud of our youth for stepping up and talking about issues people don’t normally want to talk about.”

The protest sought to give voice to communities of color and others who ally with them.

“I have been living here for two years. I used to live in the Bronx. I moved here for the scenery, the nice people and the open air,” said David Quituisaca, of Catskill. “In the two years I have lived here, I have been harassed by ICE [Immigration and Customs Enforcement], I have been given shady looks by some of my neighbors, and aside from the people I know, sometimes I don’t feel very welcome here, and I think enough is enough. I think it is time for Greene County to wake up.”

His brother, Michael Quituisaca, had a similar message.

“Enough is enough,” he said. “I definitely believe in the Black Lives Matter movement.”

Protesters on the Greene County side of the river gathered near the state Bridge Authority office, and those on the Columbia County side met at the traffic roundabout.

The goal was to voice protesters’ discontent with what they termed systemic racism and actions of police in the wake of the death of George Floyd in Minnesota and a string of deaths of black people at the hands of police.

Justice Brantley co-organized the event on the Greene County side.

“This is a peaceful protest. We have to stand up for what is right and what is wrong,” Brantley said.

Marchers made their way across the bridge and were undeterred as temperatures soared into the 90s. They carried signs, chanted slogans and played musical instruments as drivers honked and cheered them on as they crossed the bridge.

As marchers from both Columbia and Greene counties met at the center of the bridge, they chanted “Fund black futures, Black Lives Matter, defund the police.”

Barbara Mason, of Catskill, thinks society is moving backwards — and that racism is worse now than it was in her parents’ generation.

“Black lives do matter. Racism is a sin and they really need to stop this mess,” Mason said. “It is time for us to join together as one. We as black people have had enough.”

The event was spearheaded and organized by local youth in the Twin Counties, Catskill Village President Vincent Seeley said.

“For me, it’s more important that the younger folks in the community are rising up right now,” Seeley said. “We just got invited to this. We didn’t say we need to do something on the bridge to bring Hudson and Catskill together — the young folks in our community thought of this, set it up and did everything to make this a beautiful day in Catskill.”

Naquera Roach, one of the organizers from Hudson, said it was time for people to make their voices heard.

“We need to take a stand and let people know we matter just as much as anyone else, and it’s important to acknowledge that,” Roach said. “Until black lives matter, all lives won’t matter.”

The march was held the day after Juneteenth, the holiday that honors the end of slavery.

“As slavery is the father of racism, we must continue to speak out and educate ourselves, and fight systematic racism,” said Fabian Rose-Bernard, of Catskill.

He also urged the crowd to be sure to vote to make their voices heard.

Bringing about change is about more than a march across a bridge — it’s about being involved and staying involved over the long term, said Tina Martinez, of Athens.

“I want people to know this isn’t anything new, and it shouldn’t take the slow-motion murder of a black man to wake people up and make them decide to look because for those of us who are minorities, this is our America,” Martinez said.

“I want people to remember this isn’t just a hashtag and it isn’t just a fad,” she said. “If you are going to show up, you cannot show up and then melt away, because allies are not allies if they melt away and leave you swinging in the breeze. This is a life-changing moment in history, and this is the moment to say you are in it for the long haul. Use your privilege that way.”