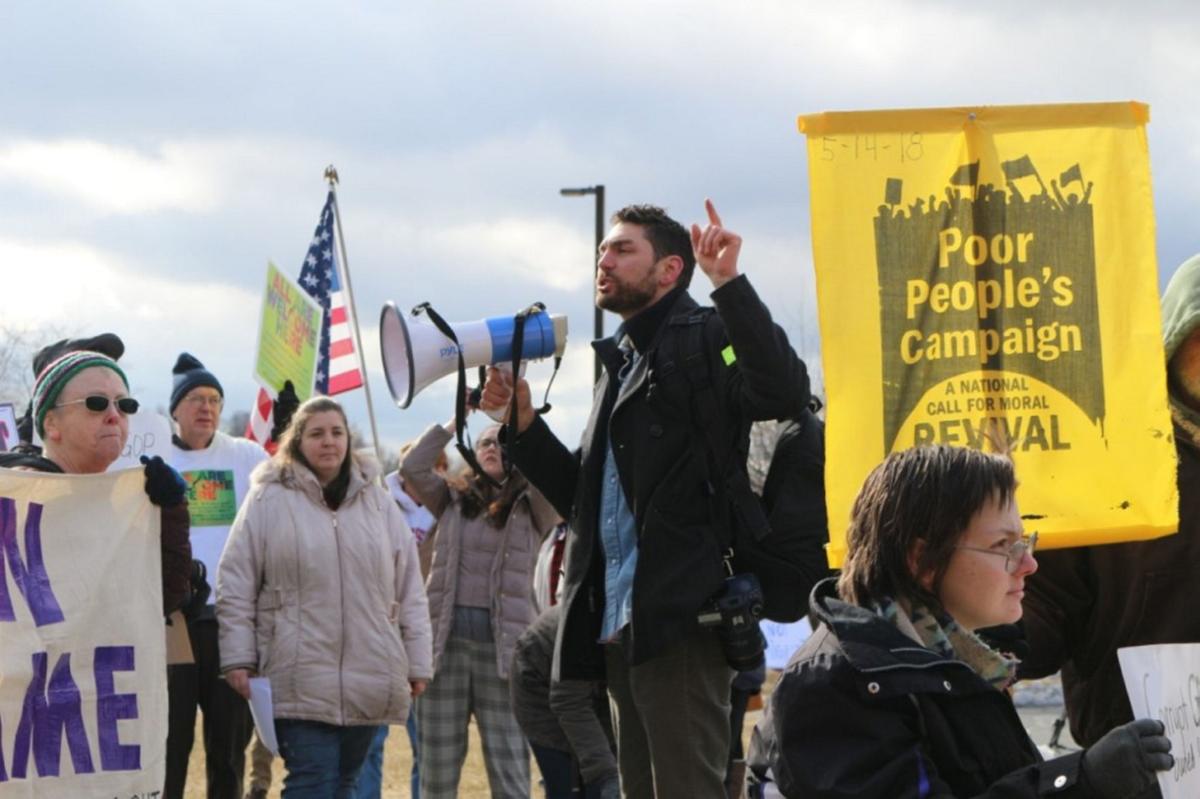 Abby Hoover/Columbia-Greene MediaBryan MacCormack, director of Columbia County Sanctuary Movement, based in Hudson, speaks to fellow protestors about his experiences. 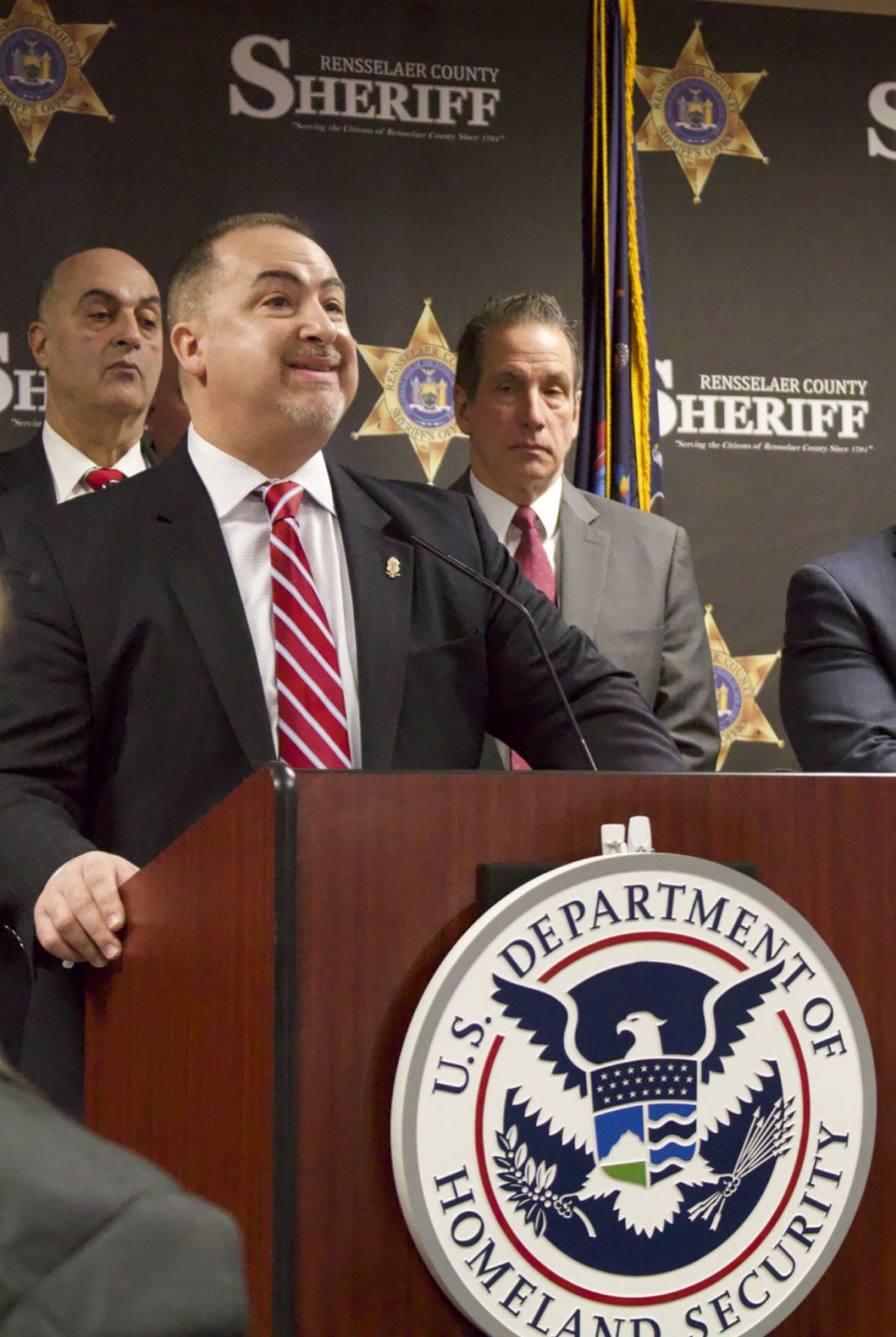 Abby Hoover/Columbia-Greene Media Larry Cosby, national president of the Federal Law Enforcement Officers Association, who is an immigrant from Cuba, said Green Light is not an immigration issue, but a matter of public safety.

Abby Hoover/Columbia-Greene MediaBryan MacCormack, director of Columbia County Sanctuary Movement, based in Hudson, speaks to fellow protestors about his experiences.

Abby Hoover/Columbia-Greene Media Larry Cosby, national president of the Federal Law Enforcement Officers Association, who is an immigrant from Cuba, said Green Light is not an immigration issue, but a matter of public safety.

Gathering outside in demonstration, speakers took turns voicing their protests. Bryan MacCormack, director of the Columbia County Sanctuary Movement noted that it was not his first time in the sheriff’s parking lot.

“Unfortunately, I’ve had to sit in this very parking lot and play soccer with a five-year-old as his mother and his older brother went to visit his detained father inside this building,” MacCormack said. “That person detained was my partner’s uncle, and that child is her cousin. He was the first victim of the Trump administration’s deportation agenda in Hudson, New York.”

Columbia County Sanctuary Movement is the regional coordinator of the Green Light campaign. MacCormack estimated that the group has assisted over 400 community members in getting driver’s licenses since the law went into effect in December 2019.

“I hope you all drove here today, now that everybody gets licenses,” MacCormack said to the crowd.

In addition to allowing driver’s licenses for illegal residents, the Green Light Law blocks sheriff’s departments from sharing data from the DMV with federal agencies.

MacCormack said there are examples from states around the country that ICE is abusing access to Department of Motor Vehicle databases.

“They are using that to target our immigrant communities, and that’s exactly why we wrote the strongest privacy provisions in the nation into the Green Light legislation,” MacCormack said. “We will not be a political pawn, and as this administration knows, New Yorkers will not lay down while they try to attack our communities.”

As the 11 a.m. meeting approached, the group moved toward the doors, which were guarded by three sheriff’s deputies, chanting to be let in.

“We knew that they were probably going to block us, so it’s more of a symbolic showing that we should have access to public space that some of these people are paying for with their tax dollars, and it’s a symbol that the police are willing to protect ICE and the federal administration over our community, which they are supposed to be protecting and serving,” MacCormack said.

As Albence prepared to speak, introductions were paused briefly while protesters pounded on the windows of the sheriff’s office until they were moved back by deputies.

“At its core, the issue we are discussing today is about putting dedicated, professional law enforcement officers of ICE and CBP [Customs and Border Patrol], sworn federal officers, whose job it is to enforce the law passed by this Congress of this country unnecessarily in harm’s way, also making them significantly less effective,” Albence said.

“Information is the lifeblood of law enforcement,” Albence said. “Without it we are less effective in our ability to protect our nation and all who live here.”

Albence called the restrictions the law imposes a “pre-9/11 mentality in a post post-9/11 world,” and said short of taking law enforcement guns away, he can think of no law more dangerous.

New York’s Green Light Law is the most restrictive in the nation when it comes to sharing DMV information, Albence said. Information such as vehicle registration, photos and addresses are the building blocks of any criminal case.

“There are those in politics who will tell you this is about illegal immigration,” Albence said. “I’m here to tell you they are dead wrong. We’re not asking the state of New York to provide us a list of illegal aliens or identify those individuals in the database who are here illegally. I don’t need the State of New York to do my job for me.”

Albence was hired during the Clinton presidency, and has continued his career with ICE through the Bush administrations, Obama, and now Trump.

Larry Cosby, national president of the Federal Law Enforcement Officers Association, who is an immigrant from Cuba, said it is not an immigration issue, but a matter of public safety.

Rensselaer County Sheriff Patrick Russo is the only sheriff in New York, and one of 75 sheriffs nationwide, to collaborate with ICE through the 287g Program.

In 2017, Russo applied for a federal Immigration and Customs Enforcement program. According to the ICE website, the application “allows a state or local law enforcement entity to enter into a partnership with ICE.”

The program allows the county jail to enforce federal immigration law at a local level. Two correction officers received ICE training and are able to question suspects about immigration status and detain them for deportation.

Russo said in a statement following the partnership that deputies would not be searching for illegal immigrants, but would let the jail house ICE prisoners, bringing in $97 a day per inmate.

They want just undocumented who are living peacefully, have not committed a crime, are not violent, so they can disrupt families, and continue their political jihad, which is what it is,” Cuomo said.

President Donald Trump met with Cuomo last week at the White House, but they did not reach an agreement.

In a statement, Cuomo called what the federal government is doing to the Trusted Traveler Program political extortion.

Albence said compromise with Cuomo is not an option.

“I don’t know how you compromise on public safety,” Albence said. “The only thing that we are asking for is to give us the information that we need to keep ourselves safe and keep the people of this country safe.”

Jordan’s Senate Bill S.6910 would amend the state’s Vehicle and Traffic Law to provide “Driving Privilege Licenses,” a new classification of license for use in non-commercial vehicles. Jordan’s bill requires that Driving Privilege Licenses will not be used for identification, and shall include a statement, “for driving purposes only — not valid for identification,” on the card.

No law enforcement representatives were present from Columbia County. The full press conference can be viewed at https://www.youtube.com/watch?v=UHcPb4NGBa.