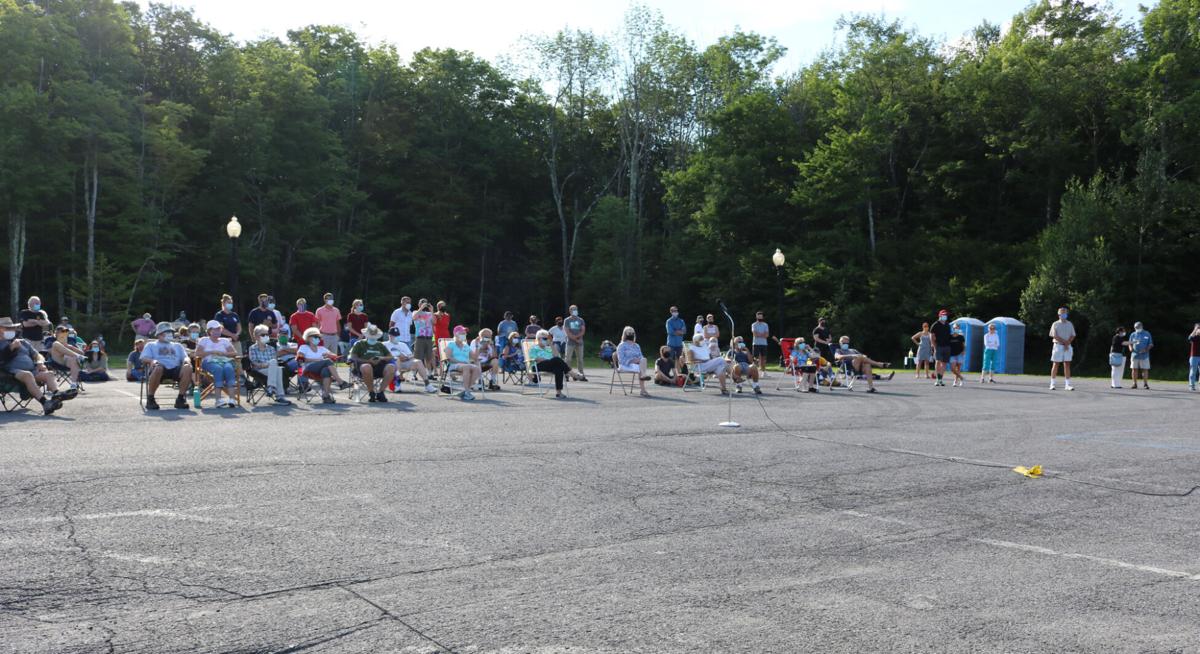 Dozens of residents from the mountaintop community and beyond attended a special meeting Monday at Hunter Town Hall to voice their concerns about the overuse of Kaaterskill Clove. Sarah Trafton/Columbia-Greene Media 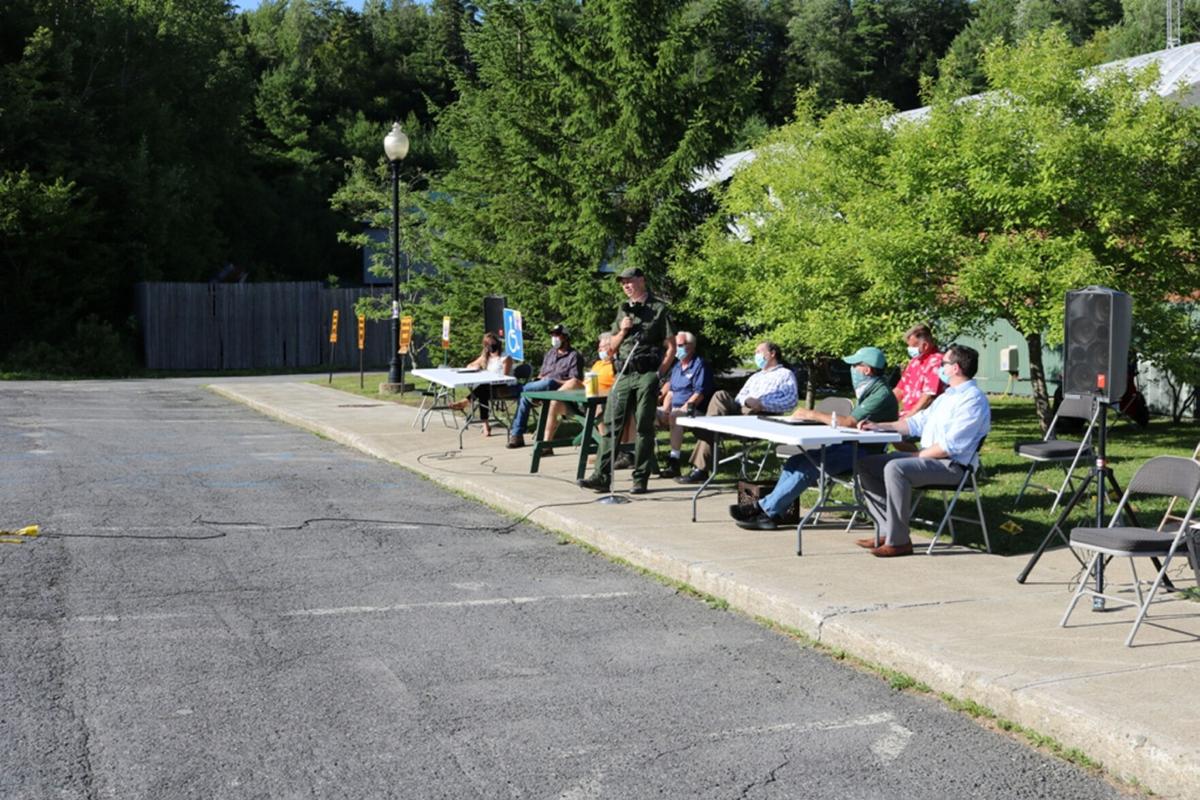 Forest Ranger Rob Dawson spoke to community members about his interactions with visitors to the clove at Monday’s meeting. Sarah Trafton/Columbia-Greene Media

Dozens of residents from the mountaintop community and beyond attended a special meeting Monday at Hunter Town Hall to voice their concerns about the overuse of Kaaterskill Clove. Sarah Trafton/Columbia-Greene Media

Forest Ranger Rob Dawson spoke to community members about his interactions with visitors to the clove at Monday’s meeting. Sarah Trafton/Columbia-Greene Media

HUNTER — Problems at Kaaterskill Clove brought out dozens of residents to a special Hunter Town Board meeting held outdoors Monday in 90-degree heat to comply with social-distancing rules.

The public was invited to voice concerns about littering and illegal parking and many proposed their own solutions.

But it remains unclear what the immediate plan for the Clove will be.

Officials from the town of Hunter, county and state government, local law enforcement and emergency personnel were in attendance.

Republican State Senate candidate Richard Amedure, who is running for the seat being vacated by George Amedore Jr., proposed an aggressive enforcement approach.

“There is a way through this,” he said. Amedure served with the state police and saw first-hand how a community battled a similar situation at Woodstock Dam in Cairo.

Hinchey said she understands the importance of protecting the community’s natural resources and public lands.

“The local community who has used these places for decades have really stepped up to try and help, but they can’t do it alone,” according to Hinchey’s campaign Facebook page, where she spoke of a recent tour she took to the Clove.

“We ran into two people from Highland picking up leftover garbage because they love and respect this land so much. A community cleanup after the Fourth of July weekend carried out 100 bags of garbage that people had just left there with no regard for what that meant for the environment, the water or the future of the land.”

Kraat recommended officials explore a permit system, such as the one at Peekamoose Blue Hole in Ulster County.

“It’s better than denying all taxpayers access,” she said.

DEC Forest Ranger Rob Dawson spoke about his interactions with visitors to the Clove.

“I walk the Clove, I talk to the visitors,” he said. “I’ve been doing this for eight years. Definitely this year has the highest use.”

Dawson said the high use is due to a number of factors.

COVID-19 has left residents and visitors with limited options, he said.

The weather has been exceptionally hot and sunny, Dawson added.

The final piece to this perfect storm is social media, Dawson said.

“I’m trying to change behavior,” he said. “I could write 100 tickets every weekend. But that wouldn’t solve the problem. A) It wouldn’t make the folks at the court very happy with me. And B) That wouldn’t address the problem of the garbage being left behind. People might start leaving it out of spite, thinking, I’ll show that forest ranger.”

Changing behavior is something that takes time, Dawson said.

Other measures that are being taken include working with state Department of Transportation to get proper signage up and with various police agencies including the Hunter Police Department, Greene County Sheriff’s Office and state police on parking enforcement, Dawson said.

The community needs to get through the next six weekends, and then officials can work on a long-term solution, he said.

Resident Ernie Reale criticized that approach, saying waiting until next summer was unacceptable.

“You’re asking locals to tolerate this litter for the next six weeks?” he said.

Reale supported other suggestions of towing and booting cars, he said.

“On Mountain Jam weekend you are here in full force,” he said. “Show a force so that social media goes ‘holy s--t.’ Rectify the problem way before next summer.”

Resident Josh Fromer took issue with “law-abiding residents” asked to accommodate people parking illegally and unloading their cars to visit the Clove, he said, referring to a sign at the bottom of the road telling motorists to yield.

“We have less than 3,000 residents and five law enforcement agencies,” he said. “It’s not a matter of not having enough cops around. It’s a matter of effort. When I see a trooper sitting at the top of the mountain road flipping around on his phone on Tinder or whatever, that’s insulting and we deserve better than that.”

Several residents described experiencing hostility from visitors, including being given the finger, having water bottles thrown at their vehicles and having their vehicles vandalized. One man, a motorcyclist, described coming within inches of his life when he narrowly avoided a car door that was opened into the road.

Cathy Abramski said this is the first year she felt unsafe in her own home.

Abramski asked for a “Lot Full” sign to be placed at the top of her road and for alternative parking options to be provided to visitors.

“Maybe they can park in a larger lot and be shuttled in,” she said.

“You can generate money as a town trolleying them to where they want to go and you can eliminate the coolers, the barbecue grills because they can’t take that on a trolley.”

The trolley system would also create jobs in the community, she added.

Resident Jim Planck agreed that alternatives need to be available for visitors.

“In 1986 at a public hearing I asked for the stairs and viewing platform at Kaaterskill Falls,” Planck said, adding that he hoped it would not take another 34 years to make improvements.

“The land belongs to the people at large,” Planck said. “You have to control the access. The only way to do that is through parking.”

Planck called for maximum occupancy to be designated at each lot and establishment of parking fees and parking monitors.

“What good does it do to write a ticket if it just gets ripped up?” he said. “The car needs to be gone when they come out of that water.”

“You have to legitimize access,” he said. “You can’t just say no parking by the road. You have to give them a reasonable place to go park.”

“Shutting down the Clove on a temporary basis is like a tourniquet,” he said. “It’s not fair to shut it down to everyone. They have a right to use it.”

“You are coming at an urban problem with a rural solution,” she said. “If you don’t want someone to park there, put a sawhorse there.”

Many people are flocking to areas like the Clove because beaches are limited to 50% capacity due to COVID-19, Boyer said.

But depending on the number of visitors coming to the Clove per day, it may be classified as a bathing beach, she said.

Residents complaining of diapers left in the clove is particularly concerning, Boyer said.

“People are bringing babies down the Rat Hole because there’s not a better option,” she said. “It’s dangerous.”

Resident Shane Valcich wants to work with the tourists and educate them.

“I think we can do this with some community help,” he said. “I don’t think it needs to close.”

Valcich said that he often sees the visitors policing each other.

“There is a vested interest,” he said.

“I don’t think people come up here wanting to do something illegal,” she said. “I don’t think we want to be known as the police capital of the ski world or of any world.”

Robert Small recommended passing out flyers to visitors to educate them about Leave No Trace principles.

Chip Thomas suggested that instead of giving visitors papers, which then could become trash, visitors could learn from their phones about the penalties and fines for parking illegally and littering.

Janet Volker stressed the need for stricter penalties for parking violations, such as towing or boots because many offenders are tearing up tickets.

Officials from the Hunter Fire Department and Tannersville Rescue Squad spoke of the risks the road poses to their departments’ response to emergency calls.

“[The cars] are blocking our access to emergency treatment,” Resident Anita Ayres said. “I resent that. I want to see every car towed.”

Resident Zoe Moore, who started an online petition for the clove approaching 3,000 signatures Tuesday, as well as the Friends of Kaaterskill Clove Facebook page, urged people to take the dangers of the Clove seriously.

“I don’t want people to forget the West Point cadet who died there last summer,” she said. “It’s only a matter of time before that happens again. I think the road needs to be closed for the rest of the summer. We need to send a message to people.”

“Think about all the human waste, and when it rains it all goes downstream,” he said. “That’s pollution. Heavy pollution. I feel sorry for the people in Palenville.”

Similar issues to a lesser degree are happening in Platte Clove, Volker said, adding that the Plattekill Creek feeds the Blue Mountain Reservoir — the drinking water supply for the town of Saugerties.

Garden to glass: Fresh summer cocktails to make at home

Take advantage of breakfast as a key family moment