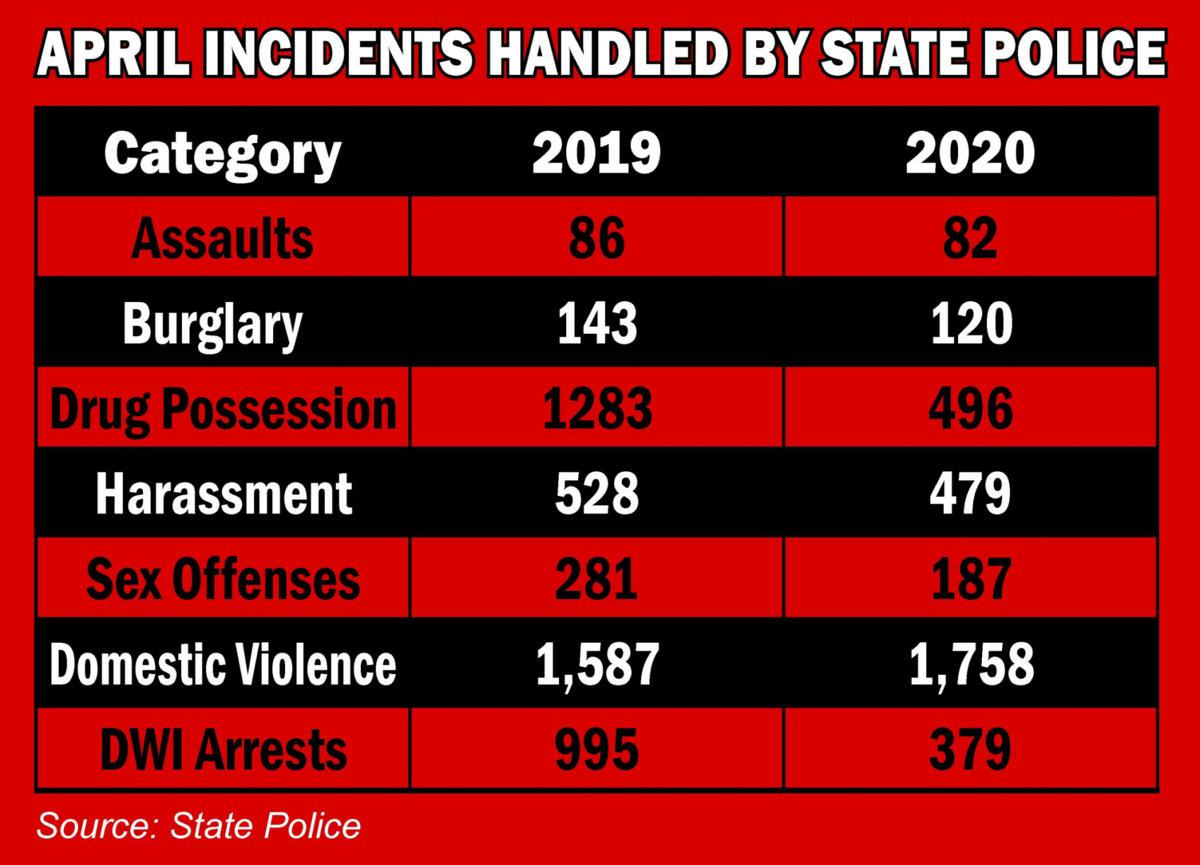 In April, state police noticed a decline in the number of incidents, most notably DWI arrests and drug possession incidents, while domestic violence incidents increased.

Misdemeanor arrests across the state declined from April 2019 by 66% in April 2020, according to data from the state Division of Criminal Justice Services. Felony arrests declined by 49%. Arrests declined in the Twin Counties as well during April.

In April, state police noticed a decline in the number of incidents, most notably DWI arrests and drug possession incidents, while domestic violence incidents increased.

Misdemeanor arrests across the state declined from April 2019 by 66% in April 2020, according to data from the state Division of Criminal Justice Services. Felony arrests declined by 49%. Arrests declined in the Twin Counties as well during April.

Local law enforcement agencies noticed a decrease in arrests while New York was on lockdown in April and most people were limiting their activities to essential trips for groceries, banking and gas.

Misdemeanor arrests across the state declined from April 2019 by 66% in April 2020, according to data from the state Division of Criminal Justice Services. Felony arrests declined by 49%.

An arrest is counted by its “top” charge, so if an individual is charged with a felony and a misdemeanor, that is considered a felony arrest.

Incidents handled by state police in April were down by 10% compared to last year and DWI arrests were down by 62%.

Drug possession incidents handled by state police also had a dramatic decrease in April 2020, while other categories of crimes such as assault, burglary, harassment and sex offense had less significant decreases.

With mass layoffs and a rise in food insecurity, Community Action Executive Director Florence Ohle said this can add to an already volatile situation.

“The bottom line is domestic violence happens because a person is a batterer,” Ohle said in April. “A lot of people are affected by economic crises or unemployment, but not everybody batters.”

“Anything that increases your own anxiety or makes you feel like you don’t have a lot of control over a situation can be expressed externally and can certainly increase the risk for people being victimized, whether it is in the home or out in the community at this point,” said Julianne Baumann, program director and clinician with the Child Advocacy Center.

“I would have to attribute some of that to people staying put and our not performing proactive traffic enforcement,” Kusminsky said.

Vehicle registrations, licenses and inspections have been extended, Kusminsky said in April, so law enforcement is not issuing tickets for expired documents.

“We are not encouraging pursuing minor traffic infractions at this point,” Kusminsky said. “If there is a threat to safety, then we have to encounter it. It is at an officer’s discretion.”

The Greene County Sheriff’s Office has handled 83 PAUSE complaints and experienced a slight surge in PAUSE over Memorial Day weekend, with nine complaints coming in on May 24.

“We have several of those types [of complaints], from people gathering to businesses not social distancing to private construction,” Kusminsky said in April. “What we are doing is advising them it’s in their best interests to do so to protect themselves as well as others until this is over.”

“No arrests have resulted from these reports, and the public has been very cooperative,” Moore said.

“If we respond to a specific complaint or become aware of an issue, troopers are educating those involved about the requirements of the order and asking for compliance,” Duffy said. “We have not run into any issues with members of the public refusing to comply.”

ClubLife Health & Fitness in Valatie was served a cease-and-desist order and issued an appearance ticket from the Kinderhook Code Enforcement Office for allegedly violating the governor’s executive order and opening.

A person who is in willful violation is subject to punishment by imprisonment not exceeding one year or by a fine not exceeding $10,000, or both, according to the law.

In the event of additional violations, the town will call upon state and local authorities to carry out their legal responsibilities to remove any individuals within the facility, according to the governor’s executive orders, Kinderhook Town Supervisor Patsy Leader said.

Any individual found within the facility will be subject to a fine up to $1,000, according to the orders.

Hudson Brewing had its liquor license suspended by the state Liquor Authority for allegedly violating executive orders and allowing patrons to gather on-premises.

During an undercover visit to the brewery, investigators discovered 27 people drinking in or near Hudson Brewing, according to the authority. Investigators were served alcoholic beverages in unsealed plastic cups without food and customers were allowed to congregate on the grounds, according to the authority, both of which are violations of the governor’s executive order.

Gov. Andrew Cuomo signed the executive New York on PAUSE order March 20, closing all non-essential businesses, prohibiting non-essential gatherings and requiring that residents practice social distancing and maintain a space of six feet from one another. Sections of the state began reopening by region May 15, with the Capital Region entering Phase I on May 20.