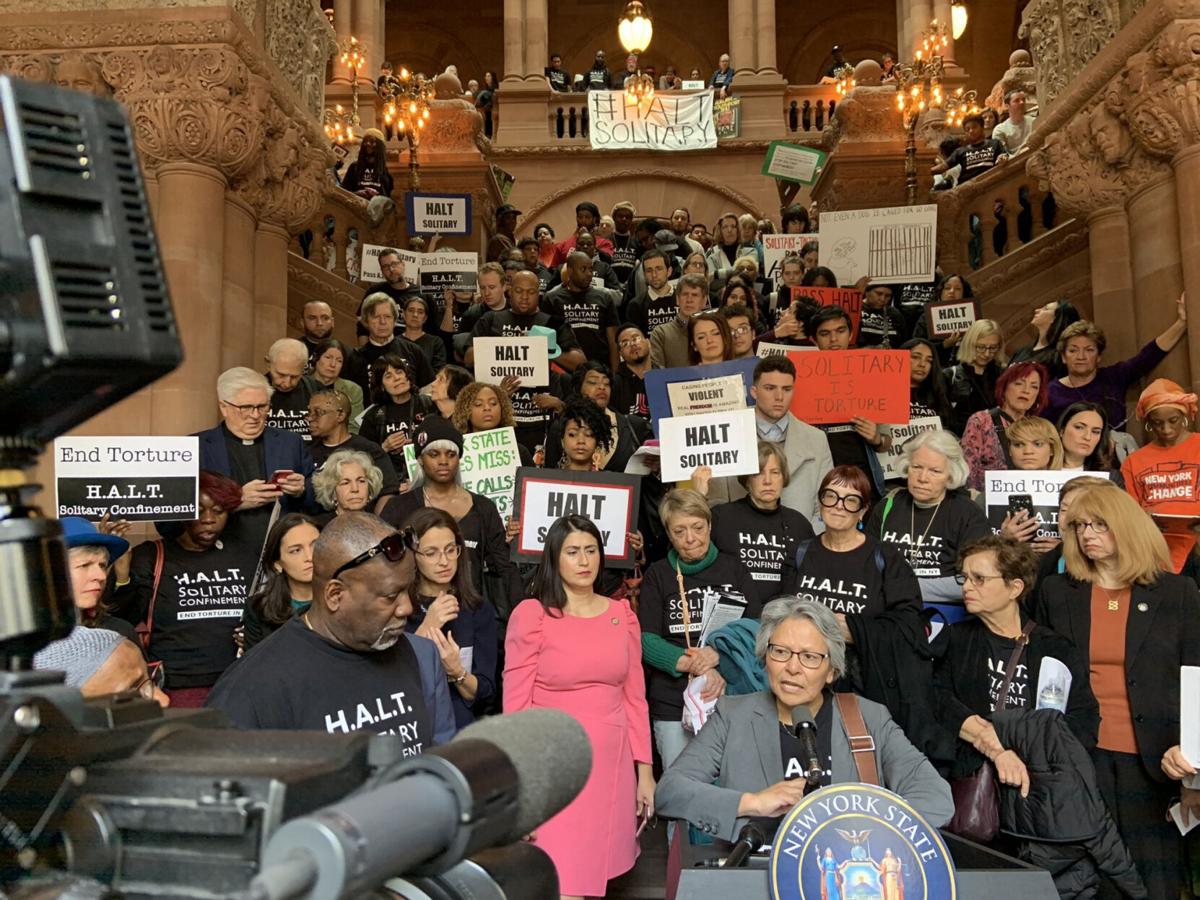 Advocates gathered at the Million Dollar Staircase in the state Capitol in January 2020 to push the HALT Solitary Confinement Act and end isolation punishment for incarcerated New Yorkers. The Senate is slated to pass the measure Thursday. Courtesy of HALTsolitary Campaign 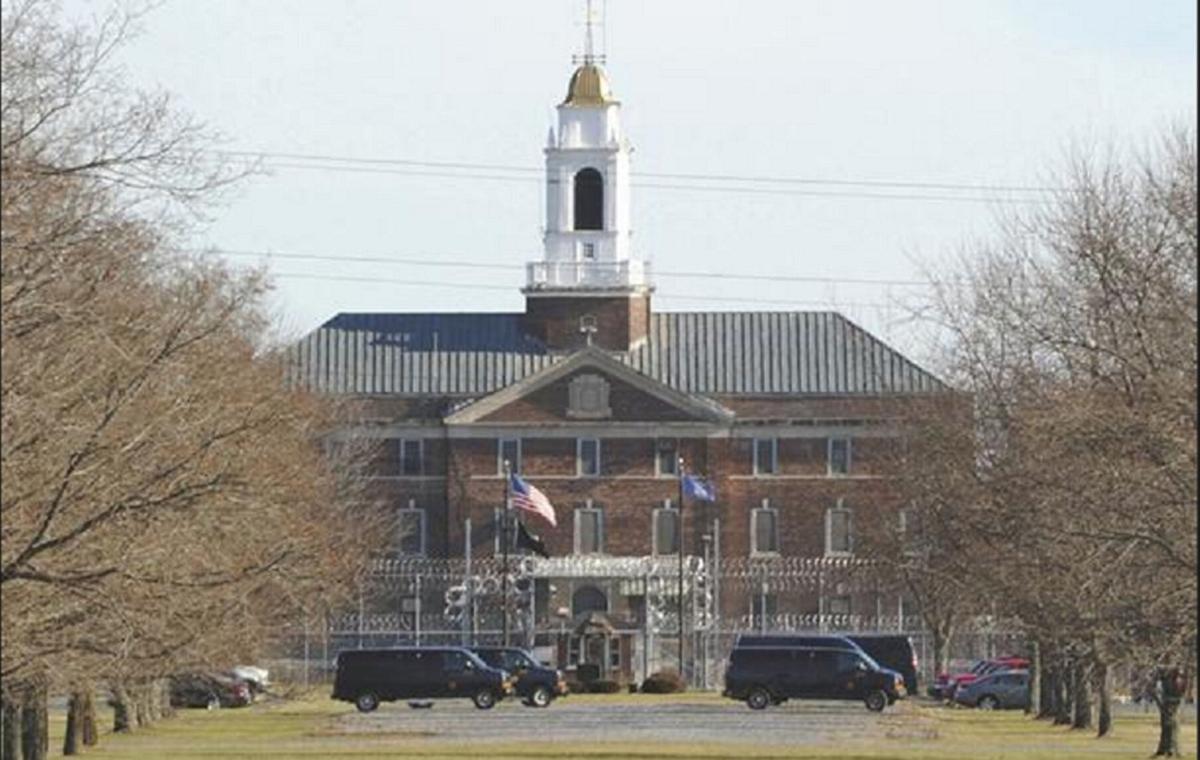 The outside of Coxsackie Correctional Facility, a state all-male maximum-security prison, on Route 9W in Greene County. File photo

Advocates gathered at the Million Dollar Staircase in the state Capitol in January 2020 to push the HALT Solitary Confinement Act and end isolation punishment for incarcerated New Yorkers. The Senate is slated to pass the measure Thursday. Courtesy of HALTsolitary Campaign

The outside of Coxsackie Correctional Facility, a state all-male maximum-security prison, on Route 9W in Greene County. File photo

Melania Brown truly smiled Tuesday evening for the first time in nearly two years as the state Legislature moves to reform the use of solitary confinement in New York’s prison system.

“They didn’t know how to place her gender identity,” Brown said during a virtual press conference Wednesday. “My baby sister did not deserve to die alone. My baby sister was full of life. She was discriminated against every door she knocked on.”

State Assemblymembers voted to pass the Humane Alternatives to Long-Term (HALT) Solitary Confinement Act, late Wednesday, to limit the time an incarcerated person can spent in segregated confinement in a state prison, end the use of the practice for vulnerable people and create alternative, more humane disciplinary and rehabilitation methods.

The bill prohibits incarcerated people in special populations from being sentenced to solitary confinement and limits their keep-lock placement to 48 hours. Prisoners cannot be placed in solitary confinement for more than 15 consecutive days, or 20 out of 60 days unless they commit specific acts, according to the proposed law.

The Senate is expected to vote on and pass the measure Thursday.

“I’ve been faking a smile since June 7, 2019,” Brown said of the bill’s movement. “Yesterday, ... it was the first time I was able to smile, to laugh. I felt how it felt to actually smile and mean it.”

Polanco, a transgender woman of color, turned to sex work for survival, Brown said, which landed her in prison and later solitary confinement. She died after an epileptic seizure.

Brown recalled a video of Rikers corrections officers who laughed at her sister, she said Wednesday, instead of giving medical help that could have saved her life.

“The video of the correctional officers haunts me every day of my life,” Brown said. “Watching my baby sister going into solitary confinement ... you can see she didn’t want to go back in there, and watching her moments later and watching three officers laugh at her who should have gone in to help her. They could have saved her life. They refused to do so.

“Moments later, I see my sister come out in a body bag.”

More than eight in 10 New Yorkers in solitary confinement are Black, Latino or a person of color.

The measure first passed the Assembly in June 2018 with a vote of 99-45, but died in the Republican-led Senate at the time.

Senate Democrats gained a supermajority this session with 43 members in the chamber majority to the GOP’s 20 and could make the bill become law with or without Gov. Andrew Cuomo’s signature.

“The Senate is going to be passing this bill tomorrow [Thursday], so it will be getting to the governor’s desk in very short order,” said Senate Deputy Majority Leader Michael Gianaris, D-Queens. “Hopefully, he will sign it. But if he doesn’t, we have a supermajority. We’ll see what we can do with that if we have to, but hopefully it doesn’t come to that.

“I apologize on behalf of state governments for letting this last as long as it did, but we are finally taking care of business and getting it done tomorrow.”

Representatives from Cuomo’s office did not return requests for comment Wednesday about the measure or Gianaris’s statements. Executive staff and aides frequently respond “the governor will review the bill” in response to questions about pending legislation.

Passing HALT is slated to save the state and New York localities up to $132 million per year, according to a recent Partnership for the Public Good report.

“The improvements we see to our criminal justice system cannot be overstated,” Meng said.

Growing numbers of New Yorkers, including state lawmakers, lobbyists and activists have been pushing for the state to amend its solitary confinement practices in state prisons.

The Assembly passed the measure with a vote of 101-49. Eleven Republicans voted in favor.

“I have been proud to support and sponsor the HALT Solitary Confinement Act, and pleased to finally see this significant piece of legislation pass the Assembly,” Assemblywoman Didi Barrett, D-Poughkeepsie, Hudson, said in a statement. “Because of the tireless advocacy of the -HALTSolitary Campaign and with the support of my Assembly colleagues, New York state is one step closer to replacing solitary with therapeutic and rehabilitative alternatives in our jails and prisons across the state.”

Lawmakers debated the bill on the Assembly floor for several hours. Representatives who took issue with the measure, mainly Republicans, argued it will pose a safety risk for corrections officers and staff, and limit their responses.

Sen. Daphne Jordan, R-Halfmoon, plans to vote against the HALT act Thursday, she said in a statement.

“I oppose Senate Bill S.2836 because it would hamstring sheriffs and corrections officers and compromise the security and safety at the public safety facilities they oversee,” Jordan said. “Presently, inmates in Special Housing Units have opportunities for outdoor recreation, personal visits, unlimited legal visits, access to entertainment including books, radios, commissary privileges and the exact same meals as inmates in the general public.”

Jordan argues prisoners are placed in solitary confinement on a case-by-case basis to help protect the facility’s other inmates. She highlighted new state regulations that went into effect in December to help amend the use of sentences to isolation.

“Those regulations have only been in effect for three months and should be given the necessary time to achieve their goal and not be circumvented by this legislation,” the senator said. “Imposing a blanket prohibition on employment of SHUs for select individuals would make it far more difficult for sheriffs and corrections officers to maintain order and ensure safety within their respective facilities. For some inmates under age 21, or older than 55, SHUs offer the only way to keep them safe. Prohibiting the use of SHUs for these individuals would put the safety of inmates and staff at risk.”

The state sentenced more than 38,000 incarcerated people to solitary confinement in 2018. About 81% of those sentenced are Black or Latin-American.

“There are people across New York state who are being held for months, years, even decades, in solitary confinement,” said Sen. Julia Salazar, D-Brooklyn, and the chamber’s leading HALT sponsor. “It is cruel, it is torture and it is time we end the practice of solitary confinement in our state.”

“As we’ve seen in nursing homes across the state, prolonged isolation can lead to devastating effects on a person’s physical and mental health,” Hinchey said in a statement Wednesday. “Right now in New York, there is currently no limit on how long an incarcerated person can spend in solitary confinement, meaning individuals are sometimes isolated for months, and even years, at a time. The HALT Act does not end solitary confinement, but creates a more humane practice by limiting the use to up to 15 days and includes rehabilitative measures that will help individuals get back on their feet upon re-entering society.”

The measure allows for the immediate removal of violent incarcerated individuals from a prison’s general population.

“Which will help protect both officers and other incarcerated people,” Hinchey said. “Our corrections officers have incredibly difficult, and often dangerous, jobs, and we need to make sure they return home every night to their families. I’m dedicated to working with law enforcement to ensure they have the tools they need to do their jobs safely while striving to build a more humane and effective criminal justice system that works for everyone.”

Darlene McDay, a member of the -HALTsolitary campaign, recalled the story of her son Dante Taylor, who died in solitary confinement Oct. 7, 2017.

McDay’s son was not given any privileges as mandated by state law during his three months in isolation, his mother said.

“My son was not allowed to have anything – no visits, no phone calls, nothing,” McDay said. “To not have the support of family for three months is absolute torture, but then what happened next is even worse.”

Prison guards allegedly beat Taylor, who was 22 years old and housed at Wende Correctional Facility east of Buffalo, until he was unconscious. He committed suicide shortly afterward and was found dead in his isolated cell.

“He was unable to see because his eyes were swollen shut and they left him alone to die in solitary confinement,” McDay recalled of her son. “He asked to see someone from mental health and he was denied that request. He asked to call his mom and he was denied that request as well. Solitary is absolute torture. ... I pray that Gov. Cuomo does the right thing and signs this bill.”

*Editor's note: This story was updated with more details about how the HALT Solitary Confinement Act will change segregated confinement in state prisons.

When I was in solitary confinement in Attica I wrote and filed an Amicus Brief into Peoples v. Annucci, which was settled. Cuomo and the NY ACLU agreed to change the Special Housing Unit ("SHU") methods and upgrade facilities for socialization. Judge Scheindlin confirmed the settlement. She's the same judge in the 2nd Circuit Southern District Court who ruled that NYC's stop and frisk was unconstitutional.