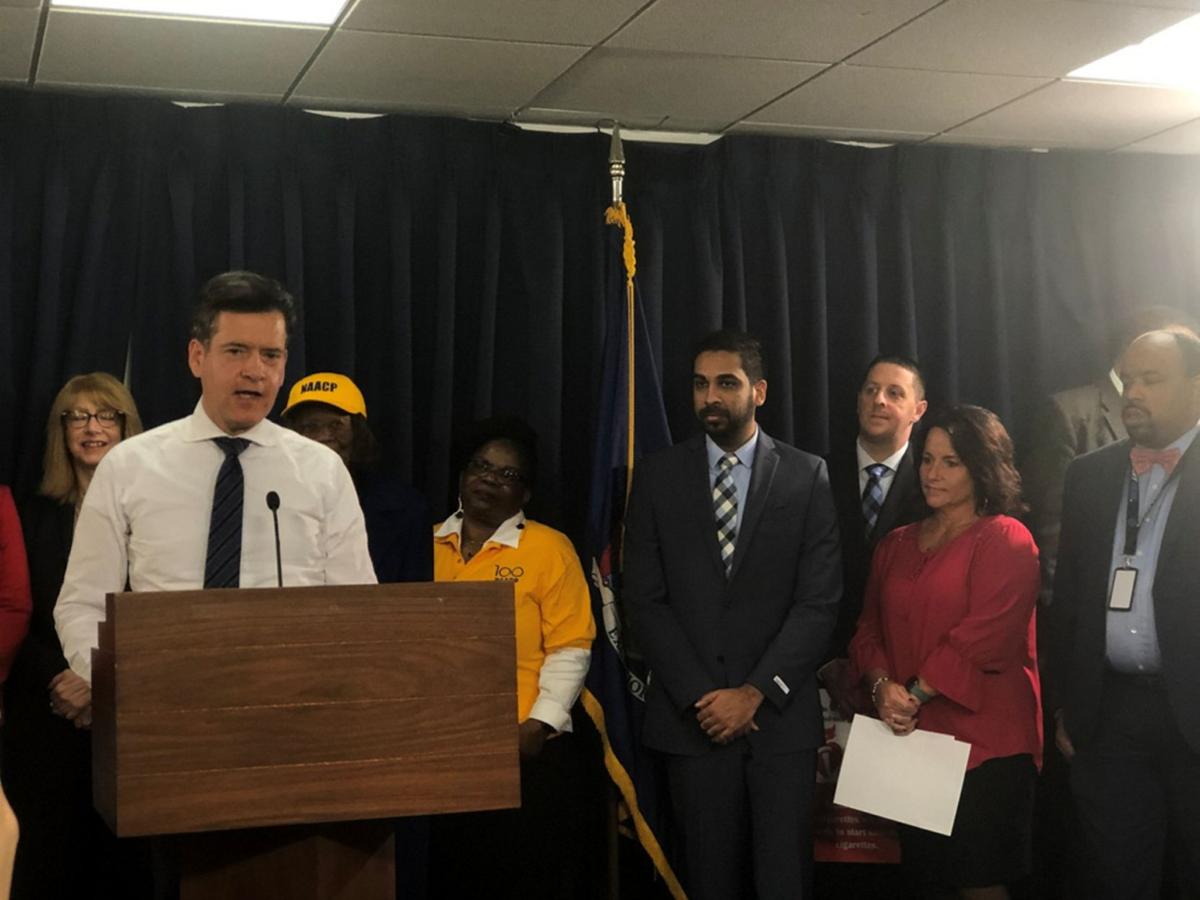 Massarah Mikati/Columbia-Greene MediaState Sen. Brad Hoylman, D-27, speaks to reporters at a press conference about the fight to ban flavored tobacco sales in the state. 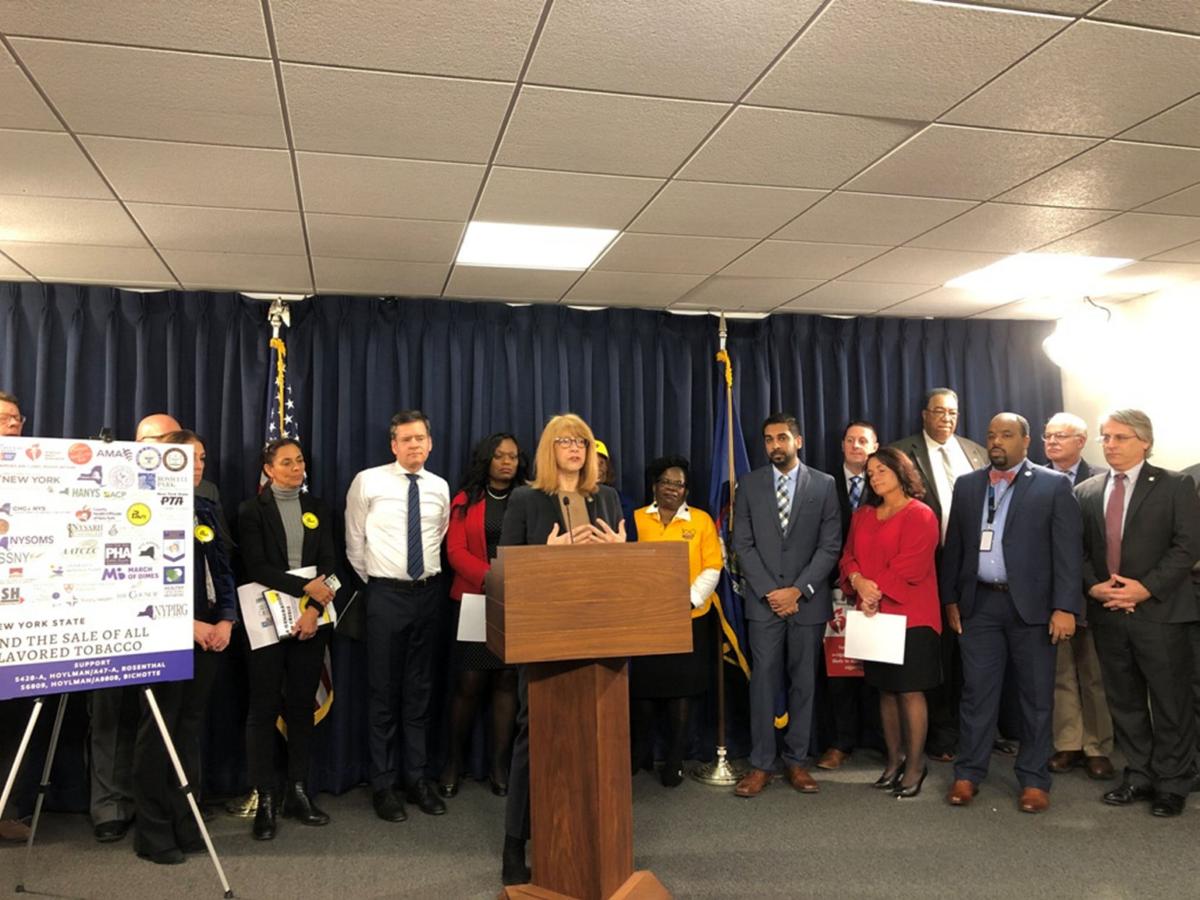 Massarah Mikati/Columbia-Greene MediaState Sen. Brad Hoylman, D-27, speaks to reporters at a press conference about the fight to ban flavored tobacco sales in the state.

ALBANY — A few days after a Supreme Court judge issued a temporary injunction on Gov. Andrew Cuomo’s executive ban on flavored electronic cigarettes, New York legislators gathered with activists, educators and medical providers in Albany to push for the passage of two bills that would effectively ban e-cigarettes and flavored tobacco.

“This is about ... stopping the next generation of kids from becoming addicted to cigarettes, nicotine, cigars, chewing tobacco and everything else that is meant to line the pockets of companies who don’t care about the effects of their insidious campaigns on the health of youth,” Assemblywoman Linda Rosenthal, D-67, the assembly sponsor of the bill banning e-cigarettes, said at a press conference Monday.

Data shows that as the e-cigarette and flavored tobacco industry focuses its advertising campaigns on youth, usage of these products among the population has skyrocketed. According to 2018 statistics, about 400,000 middle and high school students in New York have tried vaping, about half of which vaped in the previous three years. Nationwide, there are 3 million more kids vaping today than there were two years ago.

Cuomo announced in September a ban on e-cigarettes flavored with anything other than tobacco, and followed up in December with the release of a legislation proposal that would make the ban law, in addition to barring vaping advertisements targeting young populations.

The ban was challenged in New York Supreme Court by Vapor Technology Association, who ultimately won the lawsuit in a decision filed Jan. 10 that issued a preliminary injunction on the ban.

In her decision, Acting Supreme Court Justice Catherine Cholakis wrote she is not in any way “trivializing the concern” about e-cigarettes, but that “there is a likelihood that petitioners will ultimately succeed in proving that the emergency regulation is an impermissible administrative transgression into territory that is reserved to our Legislature by the State Constitution.”

During Monday’s press conference, Rosenthal agreed it is the responsibility of the Legislature to institute such action, and said with a Democratic majority in the Senate and the recent attention brought to the potential health dangers of these products, she feels optimistic about the passage of the bills.

Many speakers at the press conference focused not only on the public health dangers of flavored tobacco products and menthol, but of the disproportionate impact on African-American communities.

“The device may have evolved, but the deception has not,” said Hazel Dukes, president of the New York conference for the National Association for the Advancement of Colored People.

“For generations, the tobacco industry has been targeting our youth, in particular African-American kids, with flavored products — especially menthols. They know menthol is a gateway for kids and they focus their efforts on hooking communities of color.”

Roughly 5% of African-Americans smoked menthol cigarettes in the 1950s, Dukes said, and that number has jumped to 85% today.

The Centers for Disease Control recently found that 70% of African-Americans between the ages of 12 and 17 who smoke use menthol cigarettes — a popular alternative for children because the taste is more palatable — compared to 54% of all children in that age group.

Assemblymember Rodneyse Bichotte, D-42, the assembly sponsor of the bill banning the sale of flavored tobacco — not criminalizing its usage — said nicotine is a major contributor to the leading causes of death in African-American communities, which include heart disease and cancer.

“My bill to end the sale of flavored tobacco will end the decades of predatory and racial targeting of minority communities by tobacco companies that have historically used menthol cigarettes to addict new generations to their products,” she said.