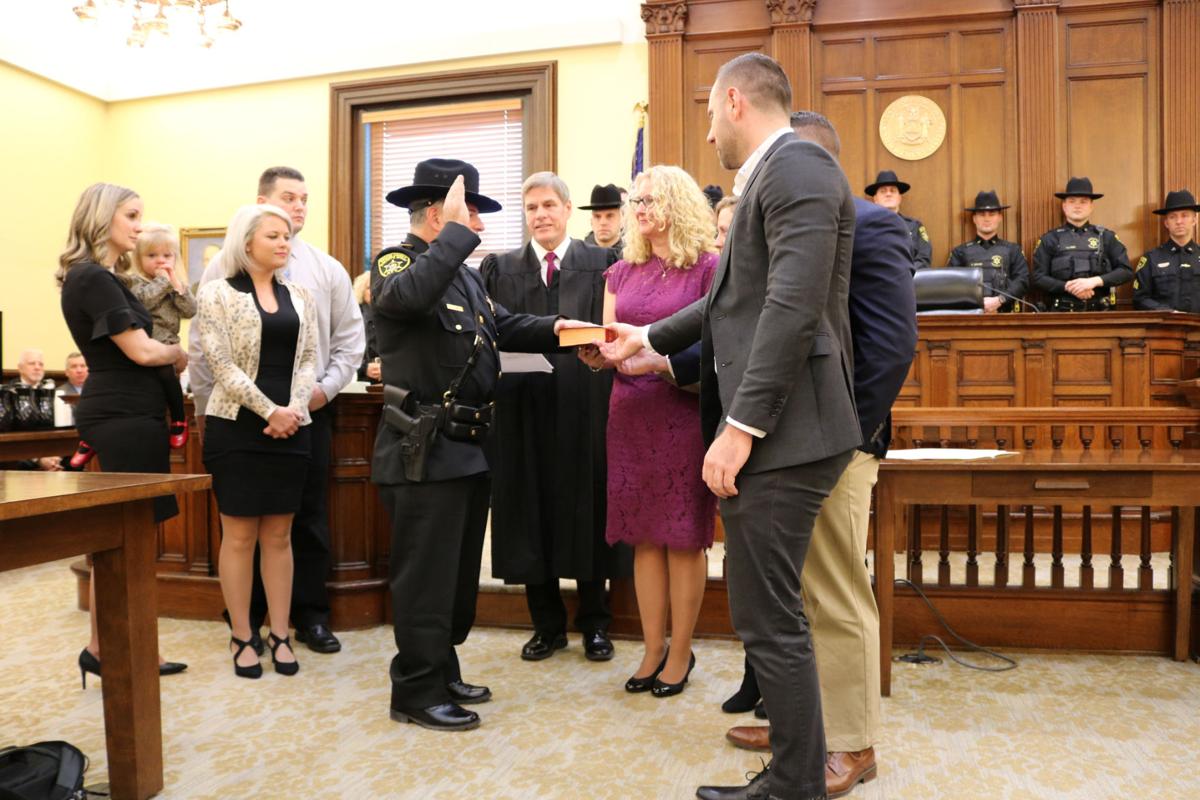 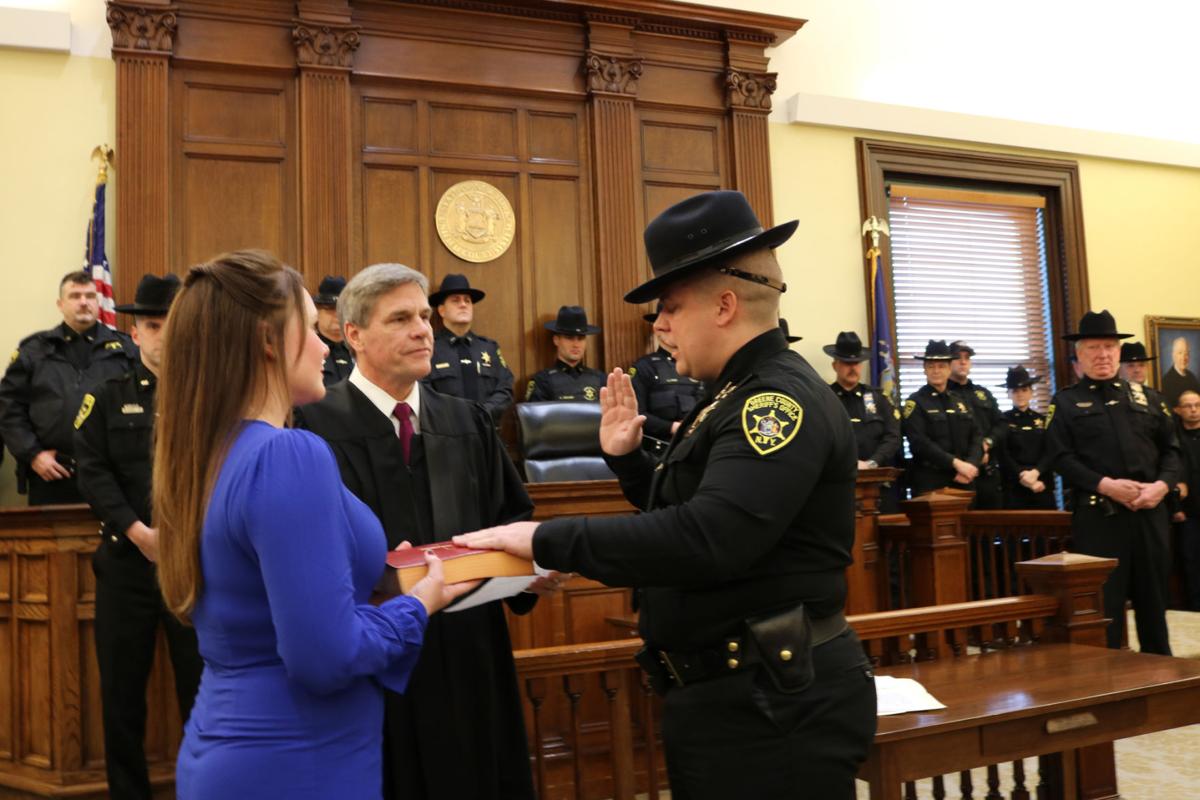 Sarah Trafton/Columbia-Greene MediaUndersheriff Adam Brainard is sworn into office on Wednesday with his wife, Kelly. 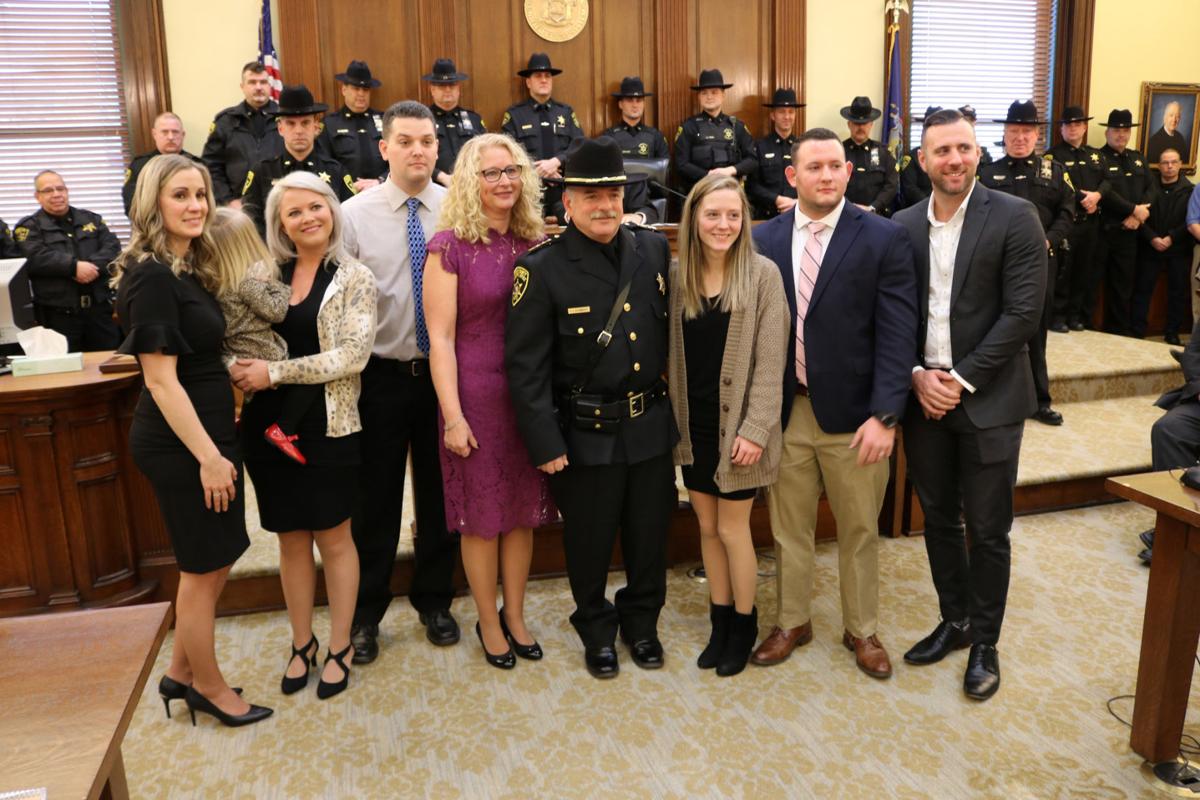 Sarah Trafton/Columbia-Greene MediaUndersheriff Adam Brainard is sworn into office on Wednesday with his wife, Kelly.

CATSKILL — As the new year symbolizes new beginnings throughout the nation, several county officials were appointed to their new positions or re-appointed for a new term.

County officials and residents gathered for the county’s annual swearing-in ceremony Wednesday, which was held at 11 a.m. at the Greene County Courthouse.

The only opposed county race was for sheriff, which was a standoff between Kusminsky and Diana Benoit, of Cairo. Both candidates had extensive backgrounds in law enforcement.

Kusminsky, who ran on the Republican and Conservative party lines, prevailed in the November election in an 8,752 to 3,288 vote, securing for himself the position of successor to former sheriff Greg Seeley, who was at the helm of the sheriff’s office for 12 years and has retired. Kusminsky is well qualified for the position, Wilhelm said as he welcomed the new sheriff to his post.

“I know our county is blessed to have a person with his qualifications and experience to lead the sheriff’s department,” Wilhelm said.

Kusminsky was named Greene County’s Law Man of the Year in 1998, and in 2008 was the State Police Troop F’s Investigator of the Year, Wilhelm said.

The new sheriff expressed confidence in his team.

“You are only as good as the people behind you,” Kusminsky said. “I think we’ll do great things.”

Kusminsky was humbled by the support he received, he said.

“I couldn’t thank you all enough,” he said. “I’d have to name each and every person in this room and in the hallway and down the stairs. I think the best way I can thank you is to do the best job I can as Greene County sheriff.”

Kusminsky was accompanied by his wife, Judy; children Peter Jr., Eric and Lisa; stepchildren Stephen and Debbie; and his mother, Berta Kusminsky, who is 93.

Other appointments to the department included Brainard, who will step into George Tortorelis’ shoes as undersheriff, and Overbaugh, who takes the place of former corrections superintendent Michael Spitz.

First of all, Pete Kuzminski should not hire Greg Seeley’s son.

Second, realizing that this department is rated a worst offender by state commission of corrections, there’s a very strong need for a very strong overhaul.

We probably have too many deputies in green county and we are probably spending too much money on the enforcement. We don’t have that much crime here.

The most amazing thing is the investment of $90 million that we don’t have, we had to borrow it, on a giant new prison that has itHas absolutely no justification.

Corrections officers don’t correct. I need actual mental health professionals who have an agenda for mental health and healing not punishing people for either being addicted to opioids or some other minor situation at the county jail is not designed to handle.