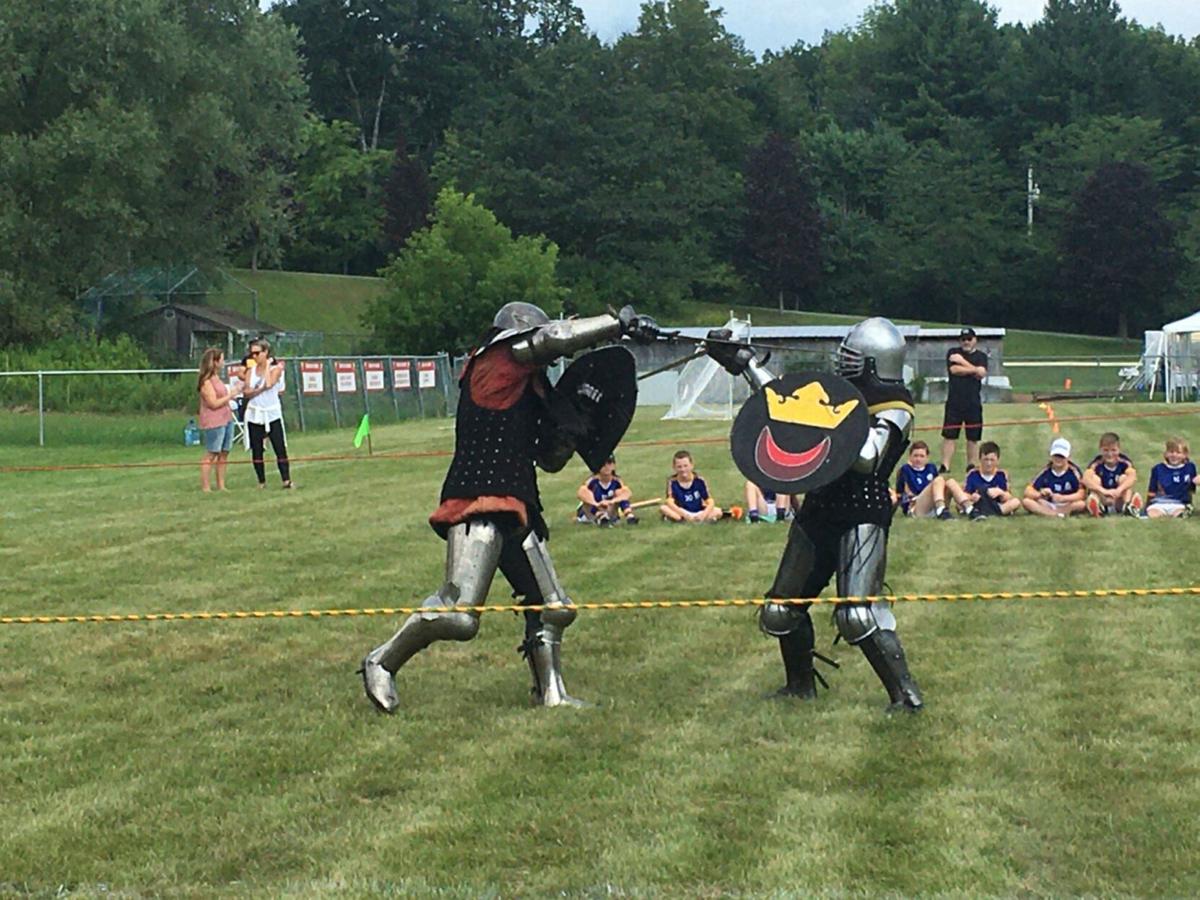 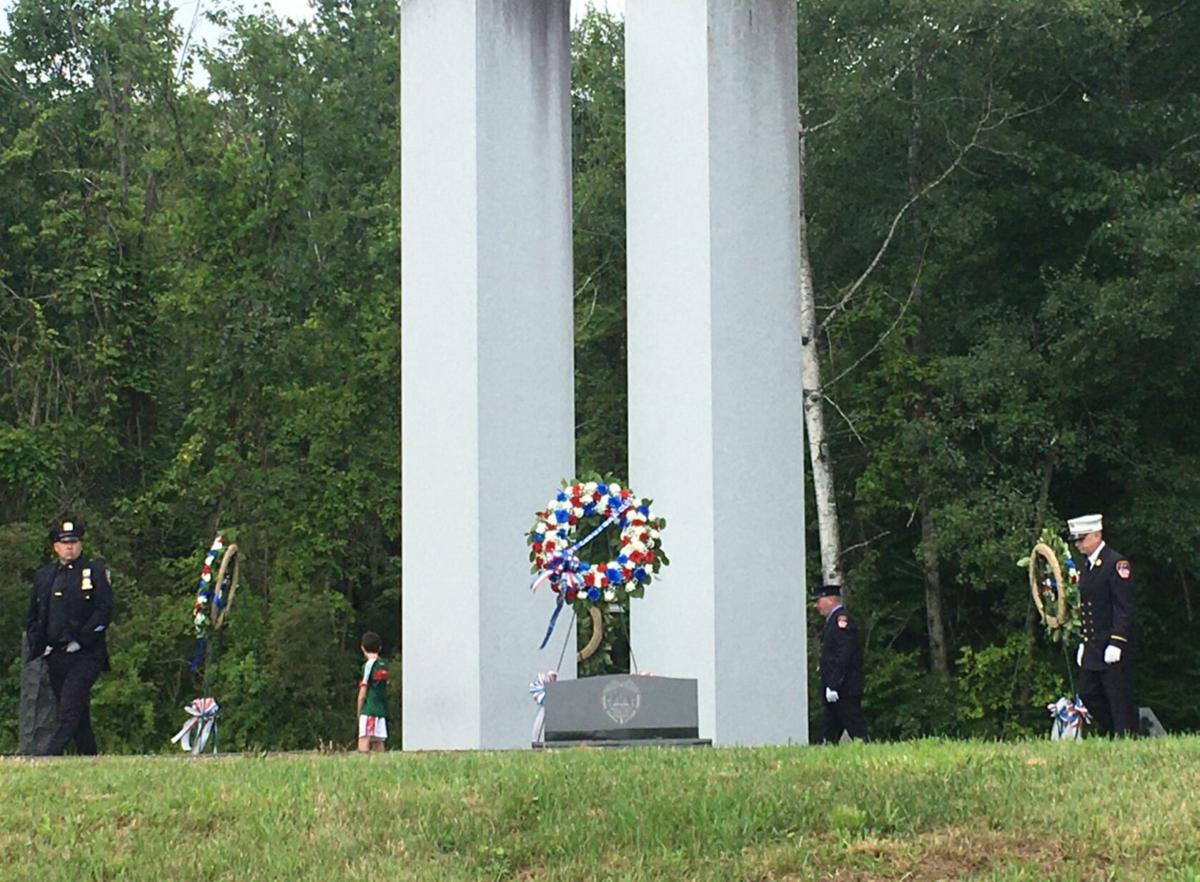 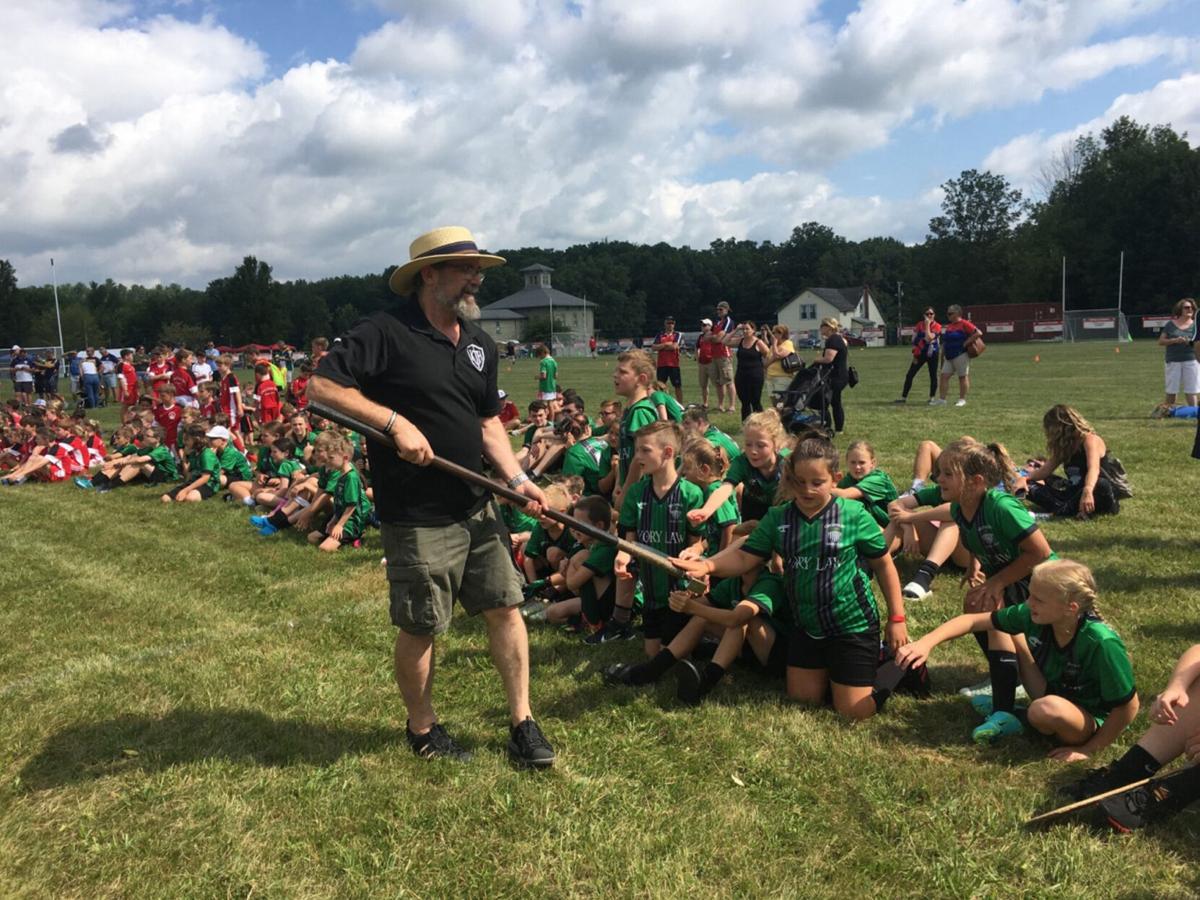 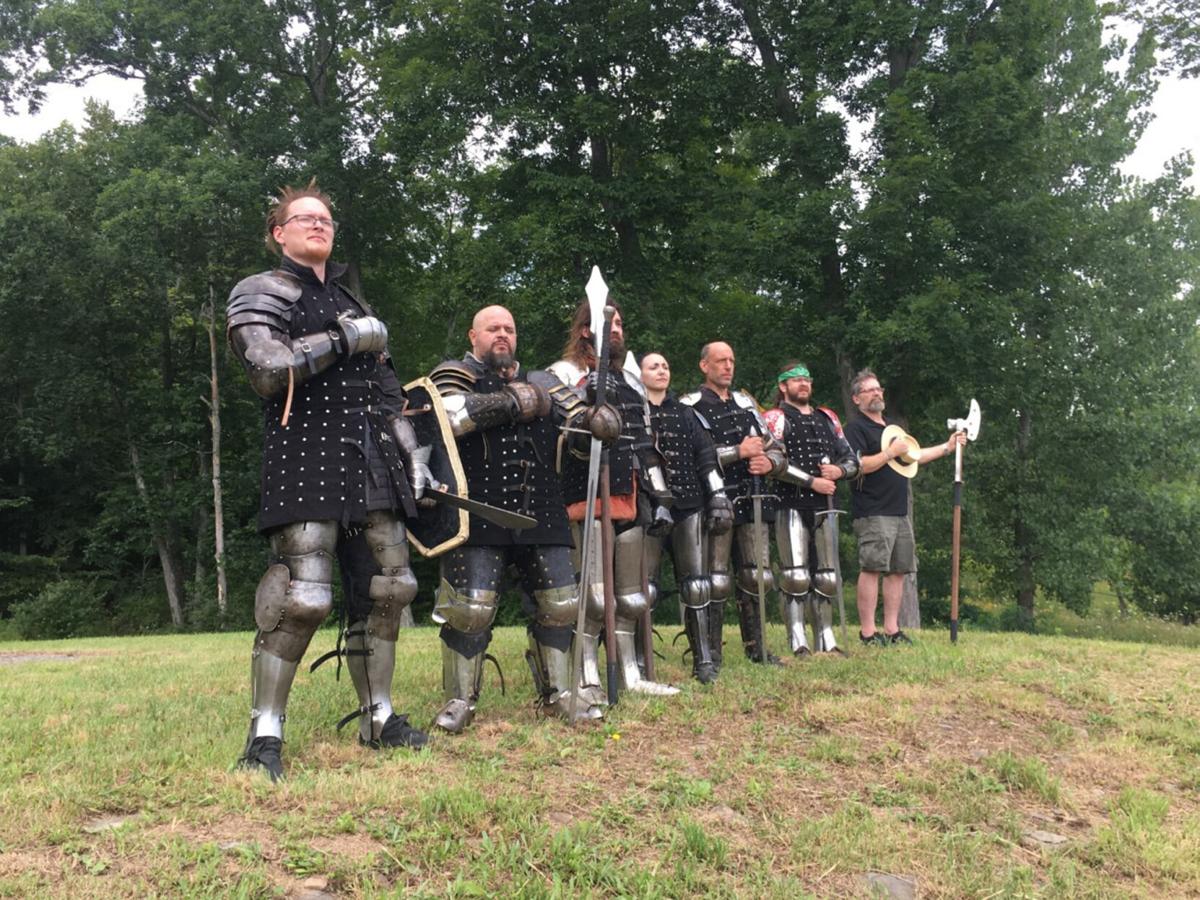 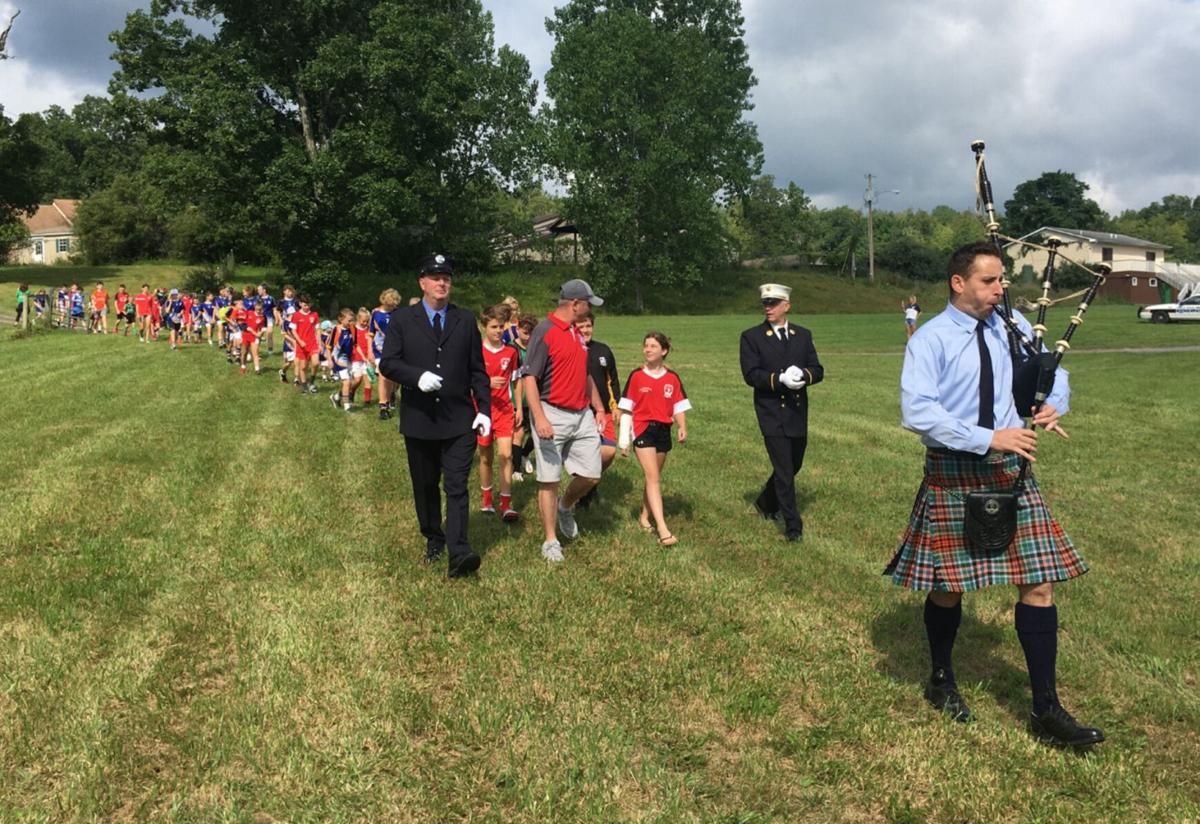 A piper leads teams from the map of Ireland to the field of play before the games get underway. Melanie Lekocevic/Columbia-Greene Media 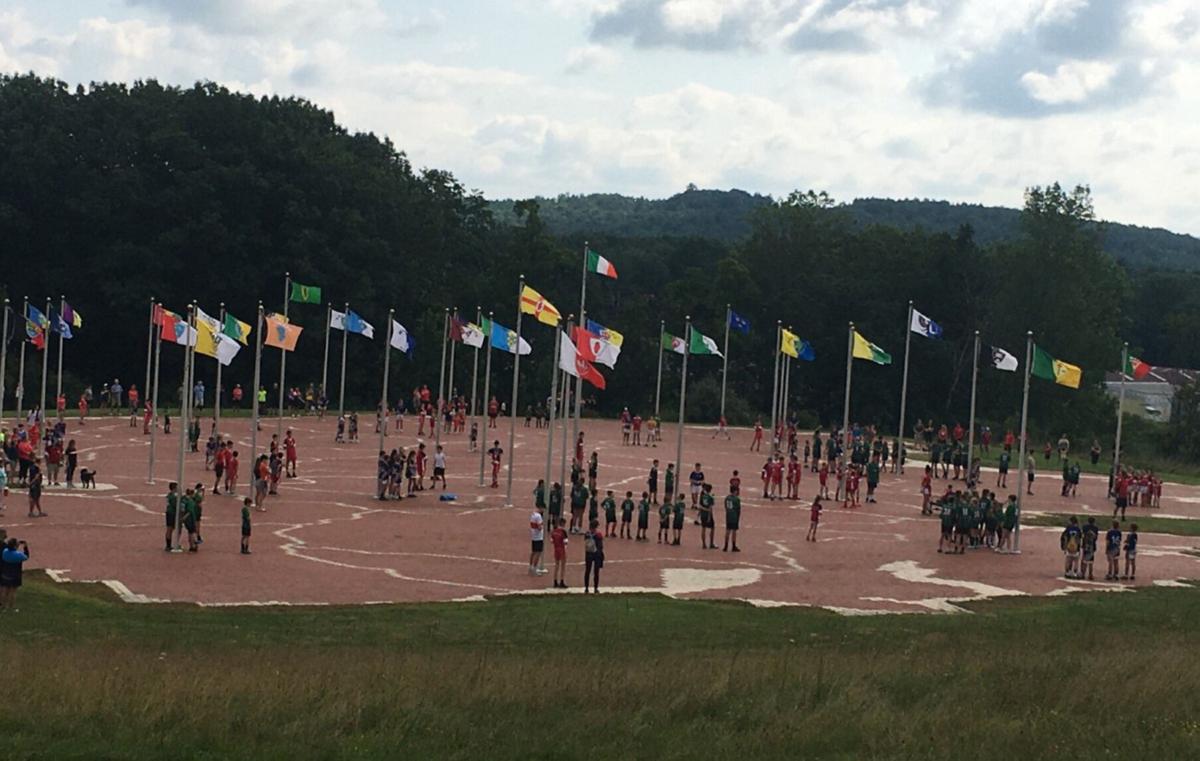 Tournament athletes on the map of Ireland, standing on the county of Ireland their team represents, while the respective flags fly overhead. Melanie Lekocevic/Columbia-Greene Media

A piper leads teams from the map of Ireland to the field of play before the games get underway. Melanie Lekocevic/Columbia-Greene Media

Tournament athletes on the map of Ireland, standing on the county of Ireland their team represents, while the respective flags fly overhead. Melanie Lekocevic/Columbia-Greene Media

But it was all in good fun.

If you think “Game of Thrones” battles were exciting, you should have been in Durham on Wednesday morning.

Yes, there were medieval sword fights — based on the rules from the 14th century, with a few twists to accommodate the more modern concern of insurance coverage.

Jaye Brooks and his team of medieval fighters from Armored Combat Sports, based in New Hampshire, were on hand to help open a multi-state tournament organized by the NY Celtics Gaelic Football Club in Yonkers and the Bronx.

This year was the first time the tournament was held at the Michael J. Quill Irish Cultural and Sports Centre on Route 145.

Hundreds of children and their families from New York City, Boston and Philadelphia turned out for the tournament to compete in Gaelic football, an Irish game that uses a round football slightly smaller than a soccer ball that can be caught, kicked and passed by hand.

The two-day event, which continues Thursday, opened with the young athletes standing on a giant map of Ireland on the county their team represents. Flags from each of Ireland’s 32 counties flew overhead. There are 26 counties in the Republic of Ireland and six in Northern Ireland.

Officers from the New York City Police Department and the Fire Department of the City of New York led a small group of athletes to the cultural center’s 9/11 memorial, a pair of columns representing the World Trade Center, which was destroyed in a terrorist attack on Sept. 11, 2001.

The officers and children laid wreaths at the memorial.

After the national anthems of both the United States and Ireland were performed, the kids followed a piper to the sports field as he performed a march.

Some of the athletes have been involved in Gaelic football for years.

Geraldine Carty brought her two sons, Sean and Conor, to compete in the tournament.

“They have been involved in Gaelic football for 12 years,” Carty said. “Me and my husband moved here from Tipperary (in Ireland) and then reared the kids up in the GAA. It was very big back in Ireland.”

The GAA is the Gaelic Athletic Association, Ireland’s largest sporting association, according to the organization’s website.

Playing Gaelic football has many benefits, Marianne Conefrey said. Her two sons, John and Cieran, ages 9 and 11, enjoy the sport.

“They learn so much from this,” Conefrey said. “It’s about community and they have fantastic endurance, especially after the pandemic. Other kids in basketball and soccer, after running a little bit they were so winded. These guys really maintained good shape and it’s so much fun with friends and family — getaways like this, they make memories for a lifetime.”

“He learned teamwork — the coaches are really, really good with the kids. It’s not just about them — it’s about passing and goals and the NY Celtics are like a family. They learn a lot of hand-eye coordination that helps them in other sports as well.”

And perhaps most important, the sport is fun, Michaels said.

“They are happy, they have fun,” she said. “You never have to drag them out to play this sport.”

Before the games got underway, six fighters from Armored Combat Sports showed off their medieval fighting skills. The group is the largest steel-fighting organization in the country, Brooks said.

“It is full-contact medieval fighting with real armor and real weapons,” Brooks said. “The armor is real, so it actually protects you like armor is supposed to, and the weapons are rebated, or blunted, so they are not sharp and they don’t cut anyone.”

The fighting team follows the rules established by King Rene of France and used in the 14th and 15th centuries, Brooks said.

“We modified them a little bit for modern times and insurance, but we do the same type of fighting,” Brooks said. “There is no stabbing so no one dies. We have around 600 fighters around the country.”

Armored Combat Sports does demonstrations and tournaments, and for one season had a show on The History Channel.

“I got involved in medieval fighting in 1981 at Brown University and I have been doing it ever since,” he said.

One of the six fighters who went into the ring was a woman, Marie, which drew some gasps from the excited children who lined the field of play.

“That’s right, you heard it — Marie,” Brooks told the crowd.

The first battles featured two fighters, and in the final fight there were four combatants. One was knocked to the ground early, leaving his teammate to fend off their two opponents.

But while there was plenty of grunting and thwacking and grinding of steel on steel, it was all in good fun and the combatants threw their arms around one another when it was all over.

Aisling Coleman, 12, watched from the sidelines.

“I thought it was really cool — I wasn’t expecting that,” she said of the sword fighting. “I thought they were just here for show. I never saw something like this before, although it is kind of like when I wrestle with my brother at home.”

After the medieval demonstration the teams of young athletes took to the field for a day of competition.

The tournament concludes Thursday and admission is free.