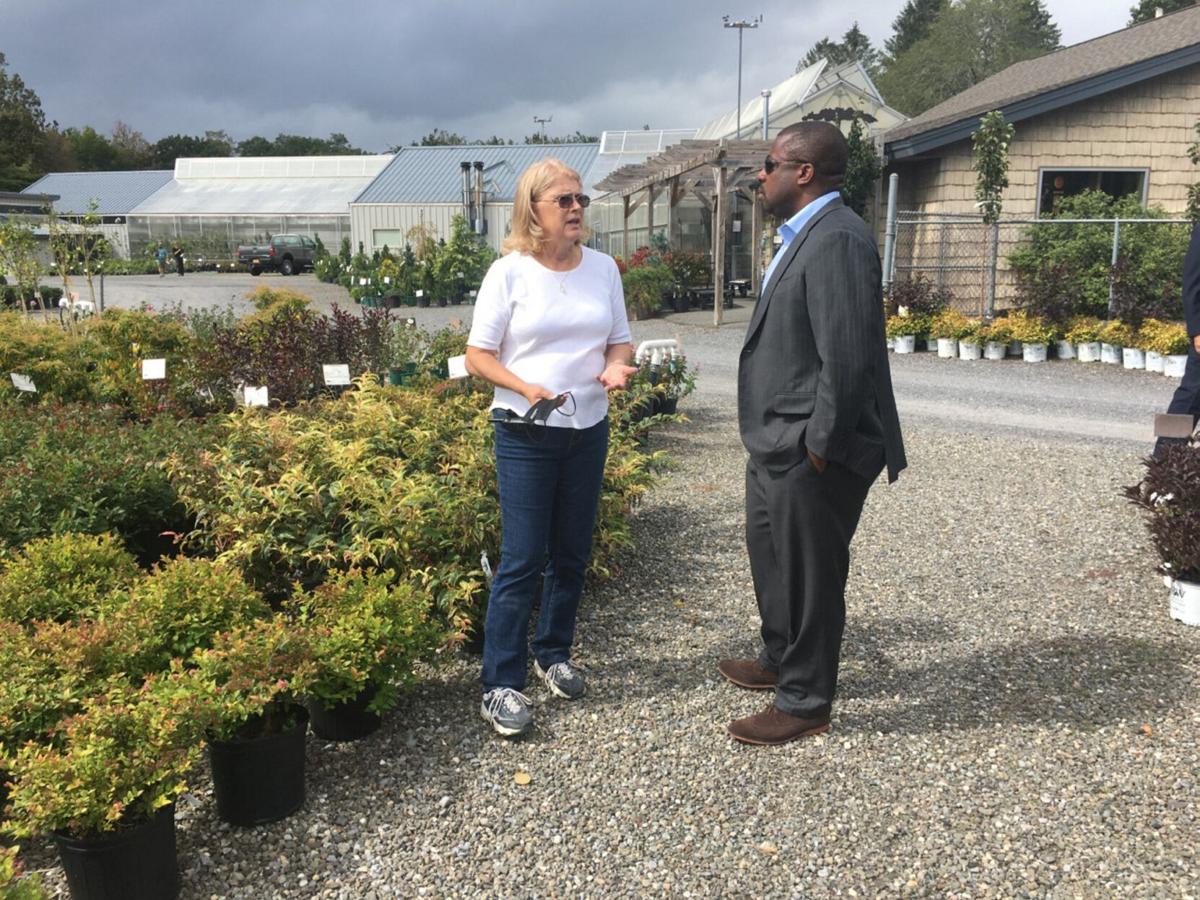 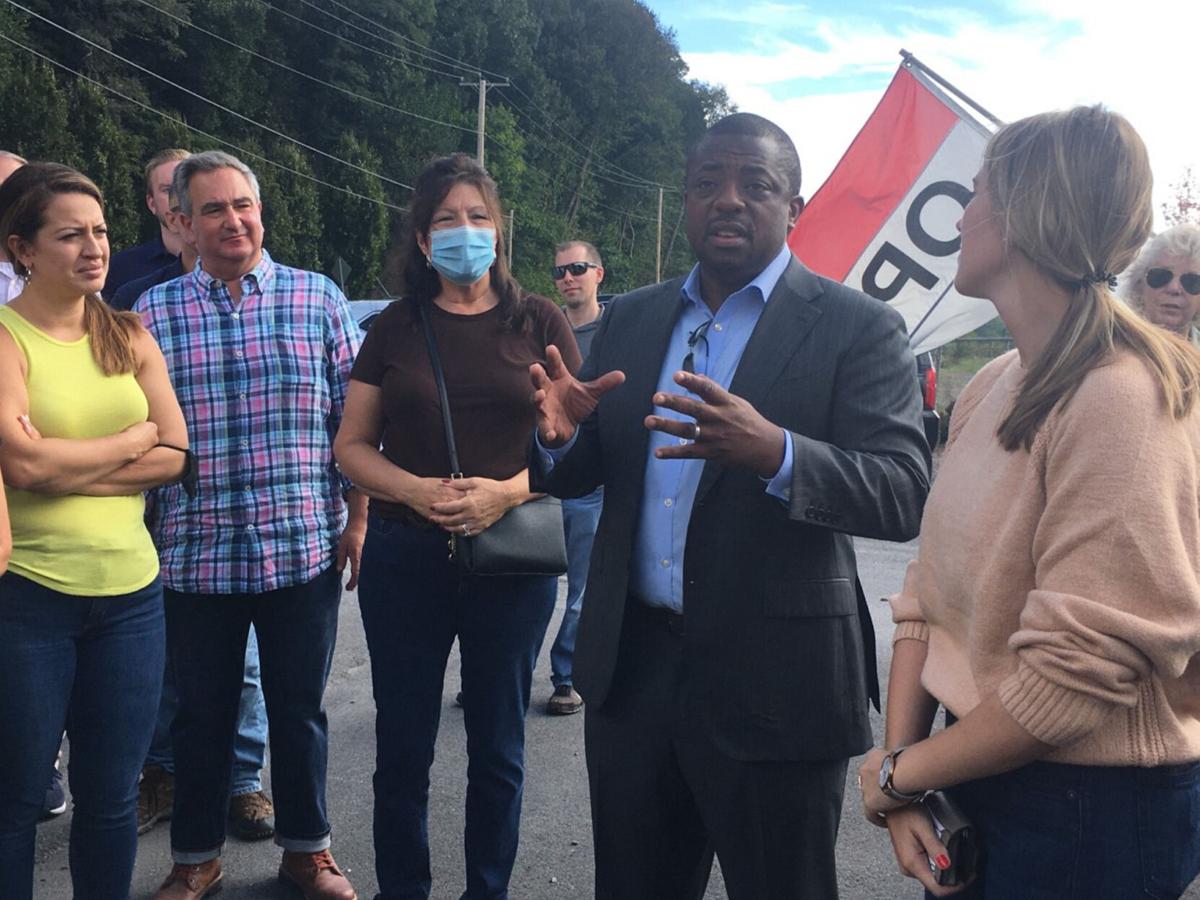 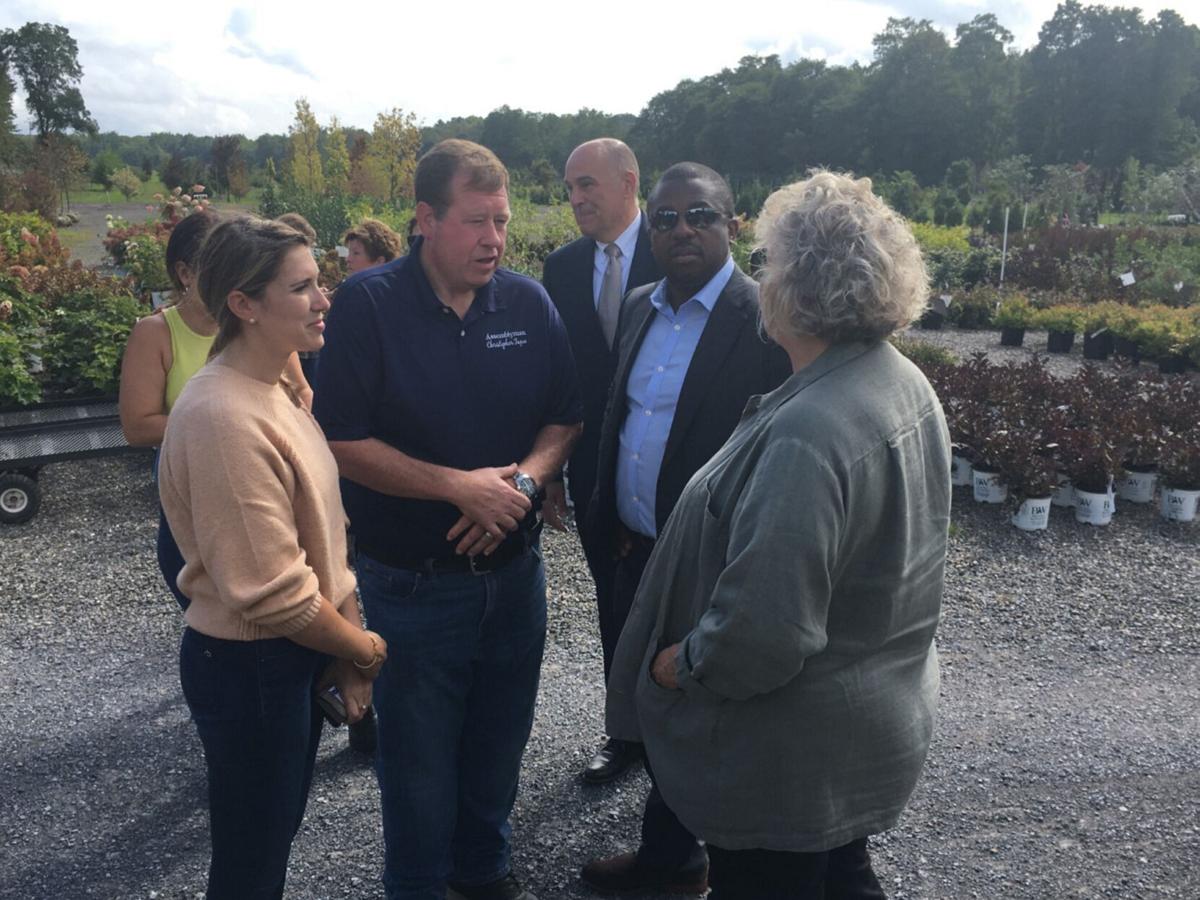 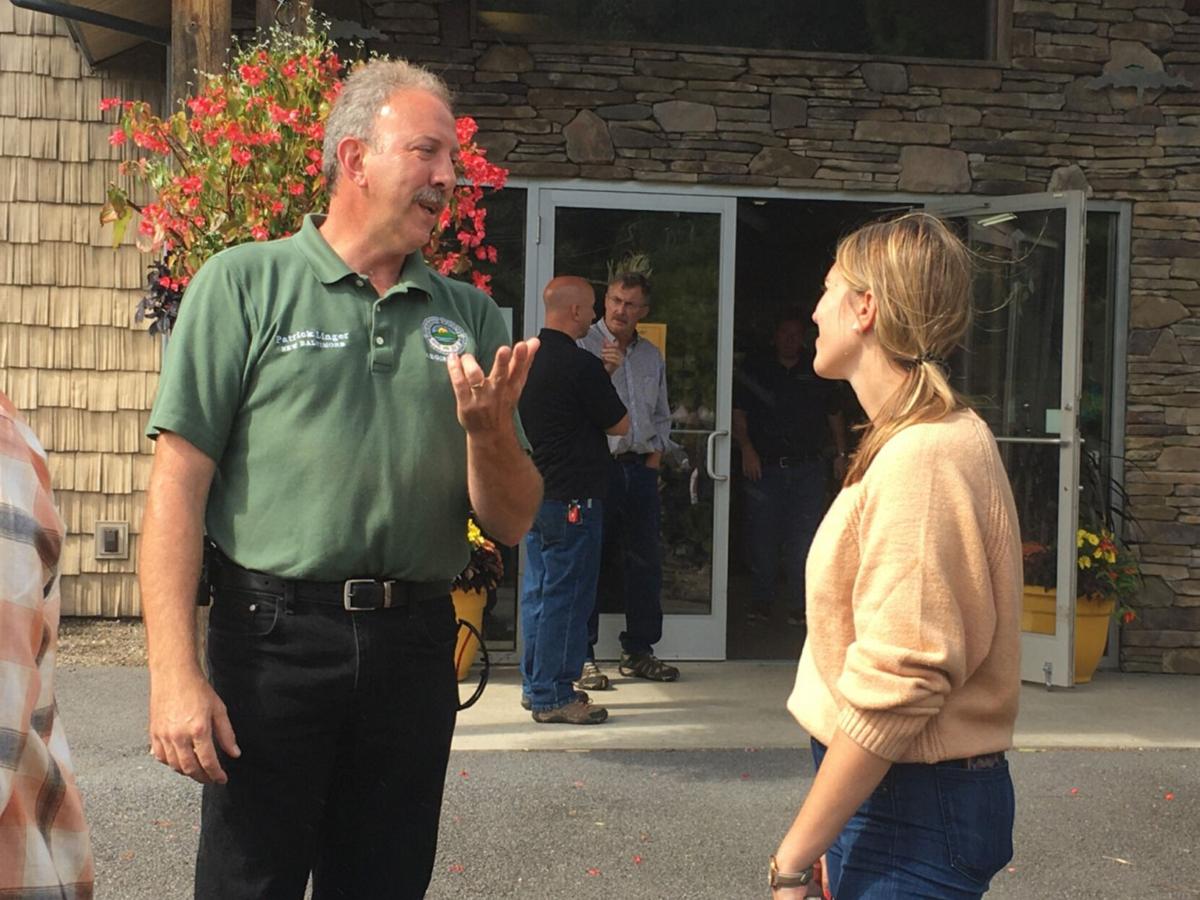 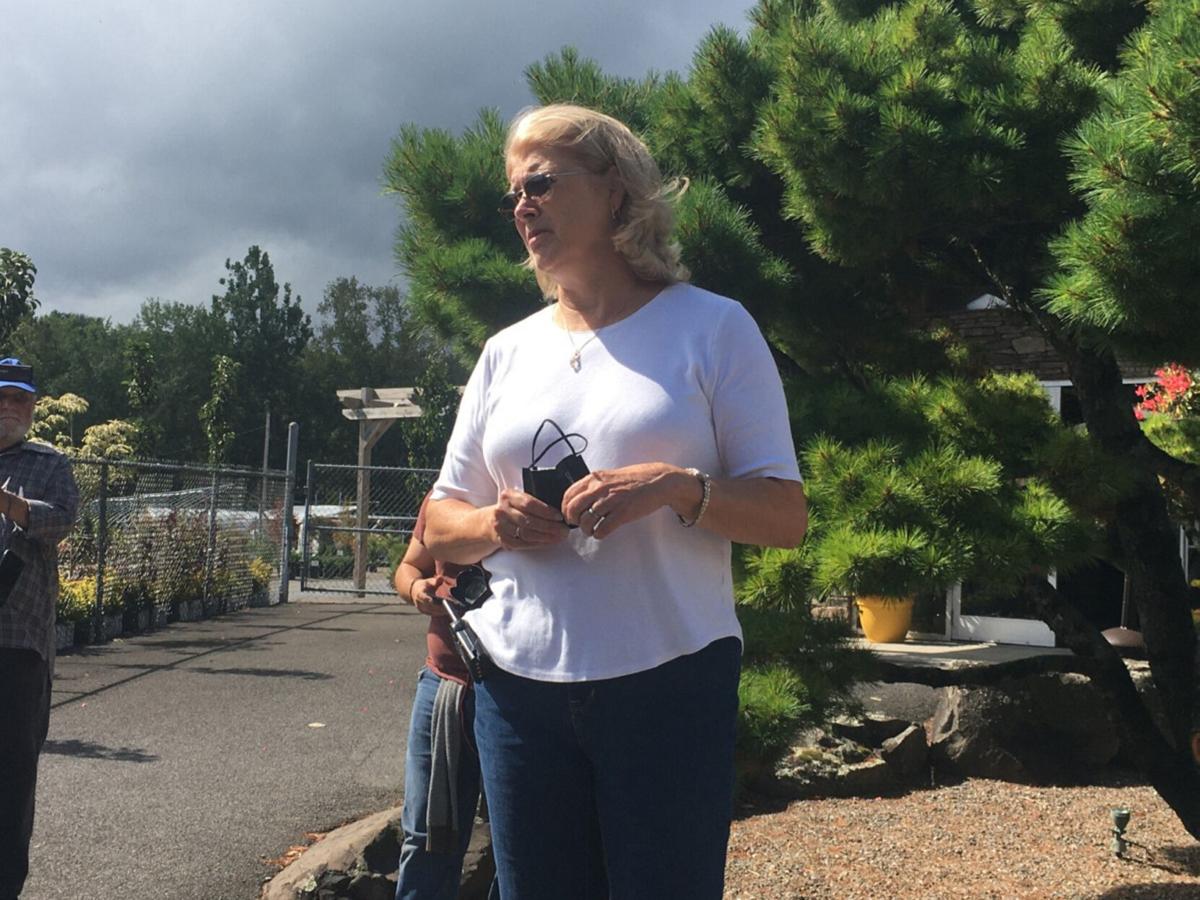 FREEHOLD — Lt. Gov. Brian Benjamin and some 60 state legislators made the rounds in Greene County on Wednesday to get an inside look at the agriculture industry.

This was the third year the Agriculture Tour of New York State was hosted by Assemblyman Chris Tague, R-102.

“We call this the ‘Connecting the Dots Tour,’” Tague said. “We want to reach the people that make decisions that can do good things for our agriculture community. We want them to understand what these people do and where their food comes from.”

Members of the state Assembly and Senate are participating in a two-day excursion that started Wednesday visiting farms in Greene County and continues Thursday when they head to farms and agriculture businesses in both Greene and Columbia counties.

“Small businesses are the backbone of our state and farms are a part of that,” Benjamin told the crowd of legislators gathered in the nursery’s parking lot. “One of the things I want to make sure to do, and that the governor wants to do, is to get around the state and see what New York produces. Let’s not just talk about our state — let’s actually be in our state, let’s get around and see what is going on.”

Benjamin said issues revolving around the state’s economy and businesses, particularly in light of the COVID-19 pandemic, should cross the political aisle.

“We have to work together,” Benjamin, a Democrat, said. “When it comes to our economy, getting out of COVID, our small businesses — that is not something that should be controversial. That should be something we can all agree on and work together on.”

Lawmakers from all areas of the state, both Republican and Democratic, attended the tour, with a large contingent from New York City.

“It is so important for my colleagues, especially ones who don’t represent rural communities, to see firsthand what we have going on here, to see how important our farms are and how they are struggling and foster the dialogue around how we can strengthen farms and farm businesses,” Hinchey said. “COVID really highlighted the need for stronger ties between upstate production and downstate need. It woke a lot of people up to the fact that we need to do more.”

Susan Thompson, from Story’s Nursery, said one of the biggest obstacles facing farm businesses is the lack of employees. Normally staffed with anywhere from 30 to 50 workers, Story’s Nursery currently has 10 employees on staff, she said.

“Farmers are hard-working people and our biggest problem is we need workers,” Thompson said. “There is a real labor shortage, especially this year.”

In prior years, the annual agriculture tour has led to state legislation, Tague said.

The Nourish New York bill was adopted last year, which facilitated programming that sends surplus agricultural products to food relief organizations at competitive wholesale prices, according to the legislation. The bill was spurred on by lawmakers who attended the tour, Tague said.

Next, Tague is hoping the state adopts legislation that would address the lack of meat-processing facilities in New York state.

“Hopefully we will get some processing legislation through for the processing of meats and milk and dairy products,” Tague said. “There is no processing in New York — the processors have all left and processing has to be done in another state. We want to put in state-owned processing facilities and lease the facilities so New York meats will go to a New York processor and not Pennsylvania or Vermont.”

Agriculture is an economic driver in the state, he added.

“New York is probably the second biggest agriculture state in this country,” Tague said. “We shouldn’t be outsourcing anything that has to do with agriculture.”

The assemblyman wants fellow lawmakers to understand the process and the challenges faced by farmers across the state.

“It was an eye-opening experience for state officials, some of which are tasked with setting policy for the state,” Linger said. “I think it is important for them to see how small farms actually operate, what is successful for them and what challenges they have. The legislation that is put out affects all of them, and we need them to survive.”

Ensuring the future of local farms should be an issue of concern statewide, Hinchey said.

“This is an issue that is nonpartisan and brings us all together,” Hinchey said. “We all need to eat and we all should be eating healthy, locally sourced food, and that food is coming from communities like those here in Greene County.

“If we strengthen farms here, everybody in the state will be better served.”