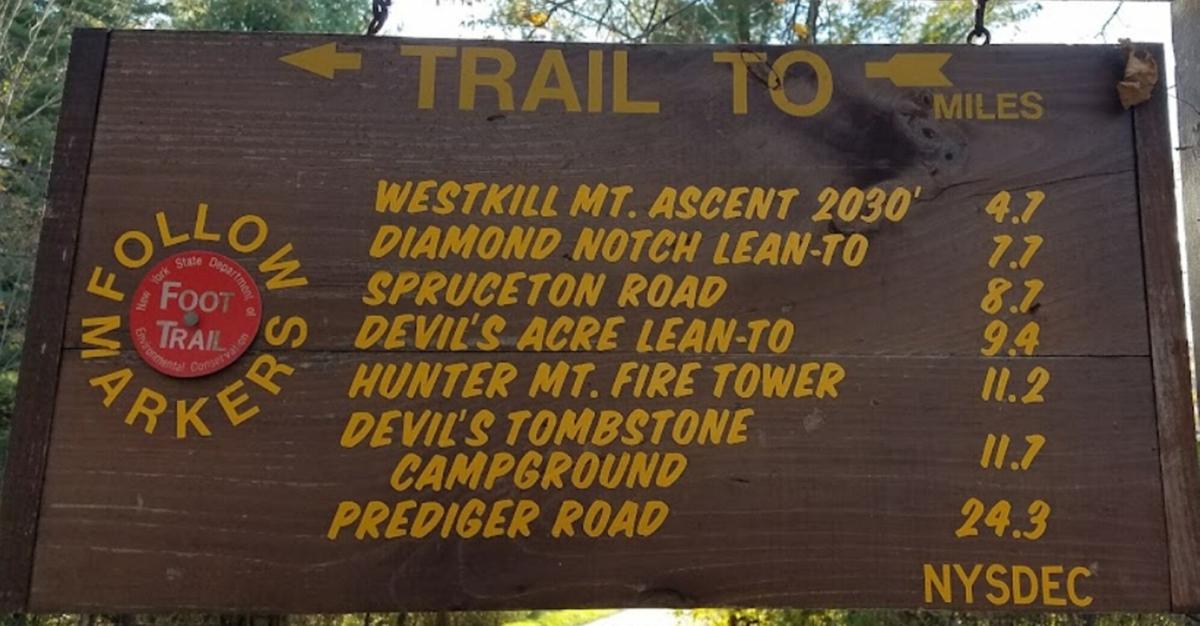 The sign marks the trail, where an Ulster County man became lost while hiking last week. Courtesy of Department of Environmental Conservation

Entrance to the Prediger Road trailhead in Elka Park, where rangers were sent, to look for a lost hiker last week. Bill Williams/Columbia-Greene Media

The sign marks the trail, where an Ulster County man became lost while hiking last week. Courtesy of Department of Environmental Conservation

Entrance to the Prediger Road trailhead in Elka Park, where rangers were sent, to look for a lost hiker last week. Bill Williams/Columbia-Greene Media

HUNTER — A hiker from Ulster County was rescued by state forest rangers after he became lost while making his way in the hamlet of Elka Park, Department of Environmental Conservation spokesman Jeff Wernick said.

The 30-year-old man from Saugerties, who was not identified by police, was not injured in the incident, Wernick said.

At about 7:45 p.m. Sept. 15, the hiker reported to Greene County 911 that he was lost. Dispatchers contacted DEC and requested forest ranger assistance in searching for the hiker, who was lost near the Prediger Road trailhead in the Indian Head Wilderness, Wernick said.

Rangers Katherine Fox and John Gullen, town of Hunter Police, and state police responded to the area to begin the search.

The rangers bushwhacked through the heavy brush and walked toward the cell phone coordinates that were determined by Greene County 911.

Once the rangers located the hiker, they provided him with a flashlight and escorted him back to his vehicle.

The Indian Head Wilderness contains 11,500 acres and is home to the eastern section of Devil’s Path. It includes four major peaks with trails including Indian Head, Twin, Sugarloaf and Plateau. The area has some of the most spectacular scenery in the Catskills, but also the most rugged, according to DEC.

More than 40 hikers have been rescued by forest rangers this year over the course of 20 hiking incidents after they became lost or injured in the town of Hunter.

Three hikers have been rescued, to date, in September. None of them required hospital care.

Nine hikers were rescued in August. One of them was taken to Albany Medical Center.

There were five rescues by rangers in July. All of those hikers were from out of the area.

Rangers rescued two hikers in May and three more in June. April saw one hiker, with his dog, rescued.

There were two rescues in March and two more in January.

Be sure to properly prepare and plan before entering the backcountry, DEC said.

If a person needs a Forest Ranger, whether it’s for a search and rescue, to report a wildfire, or to report illegal activity on state lands and easements, they should call 833-NYS-RANGERS. If a person needs urgent assistance, call 911.