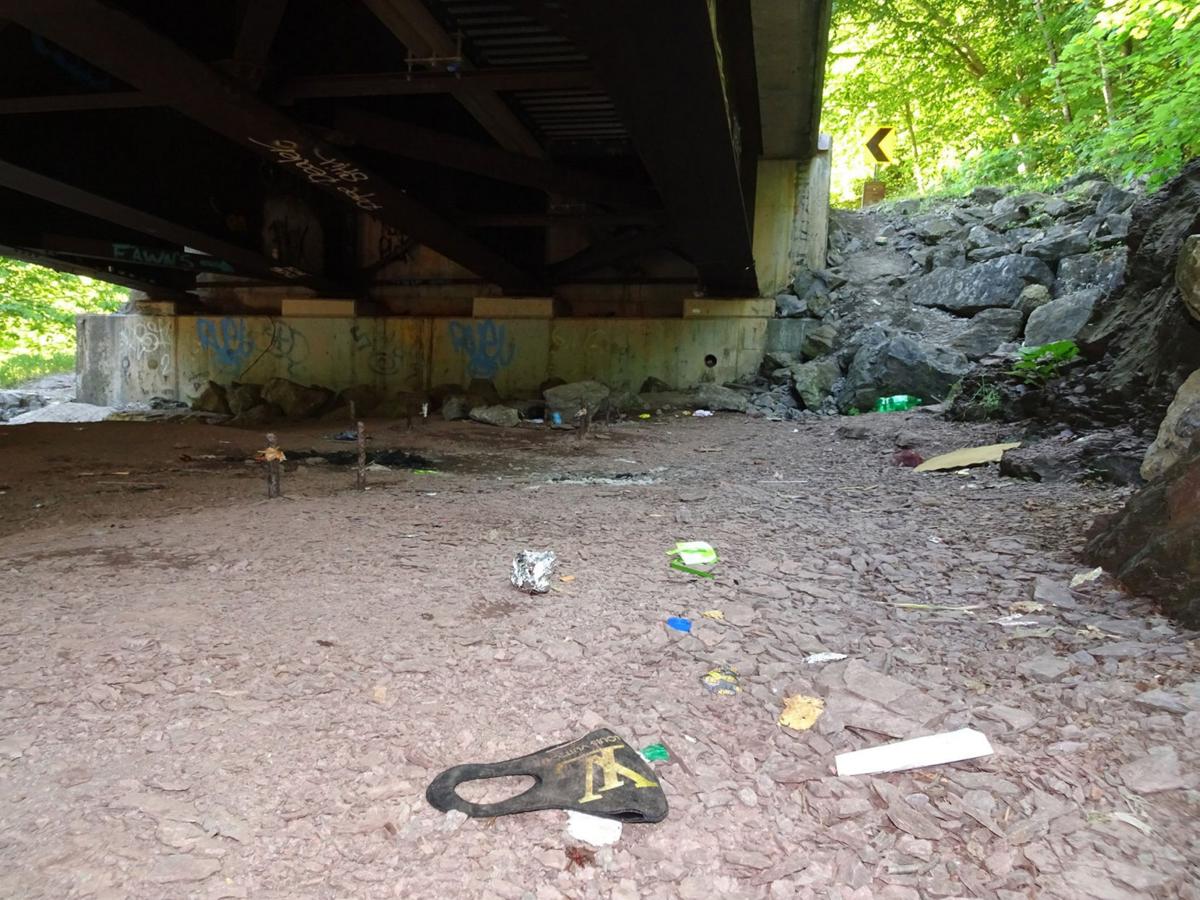 Contributed by Shane Valcich Trash strewn around Kaaterskill Clove. State and local officials are working to develop a strategy for resolving the overcrowding problem at the Clove. 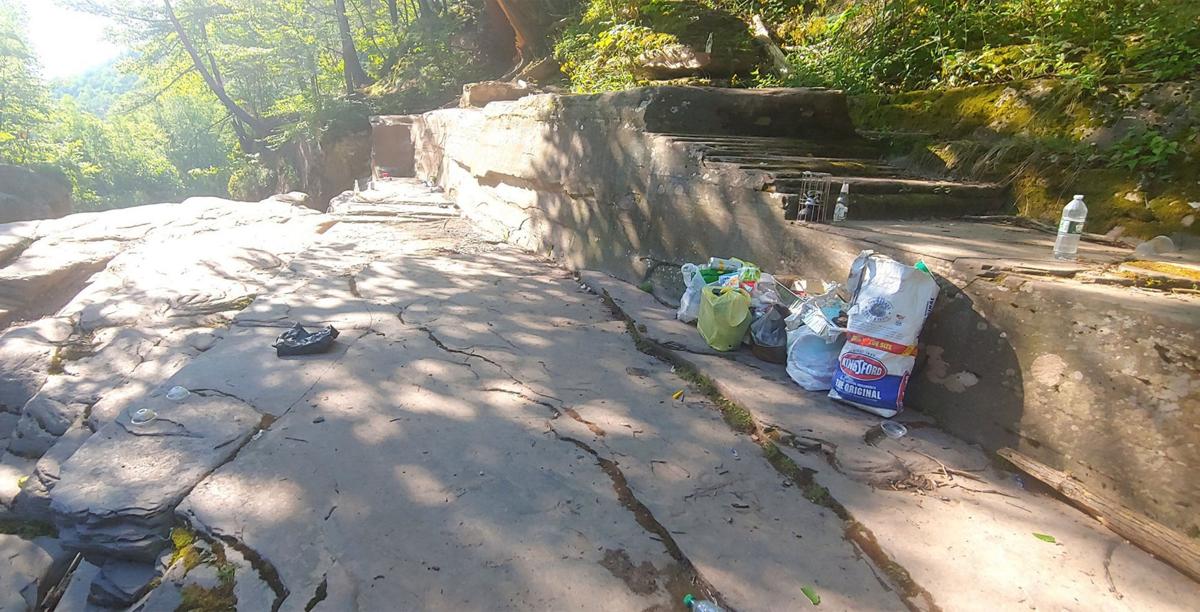 Contributed by Shane Valcich Trash strewn around Kaaterskill Clove. Friends of Kaaterskill Clove founder Zoe Moore circulated an online petition to protest the environmental abuses at the Clove. More than 1,000 signatures have been recorded on the petition. 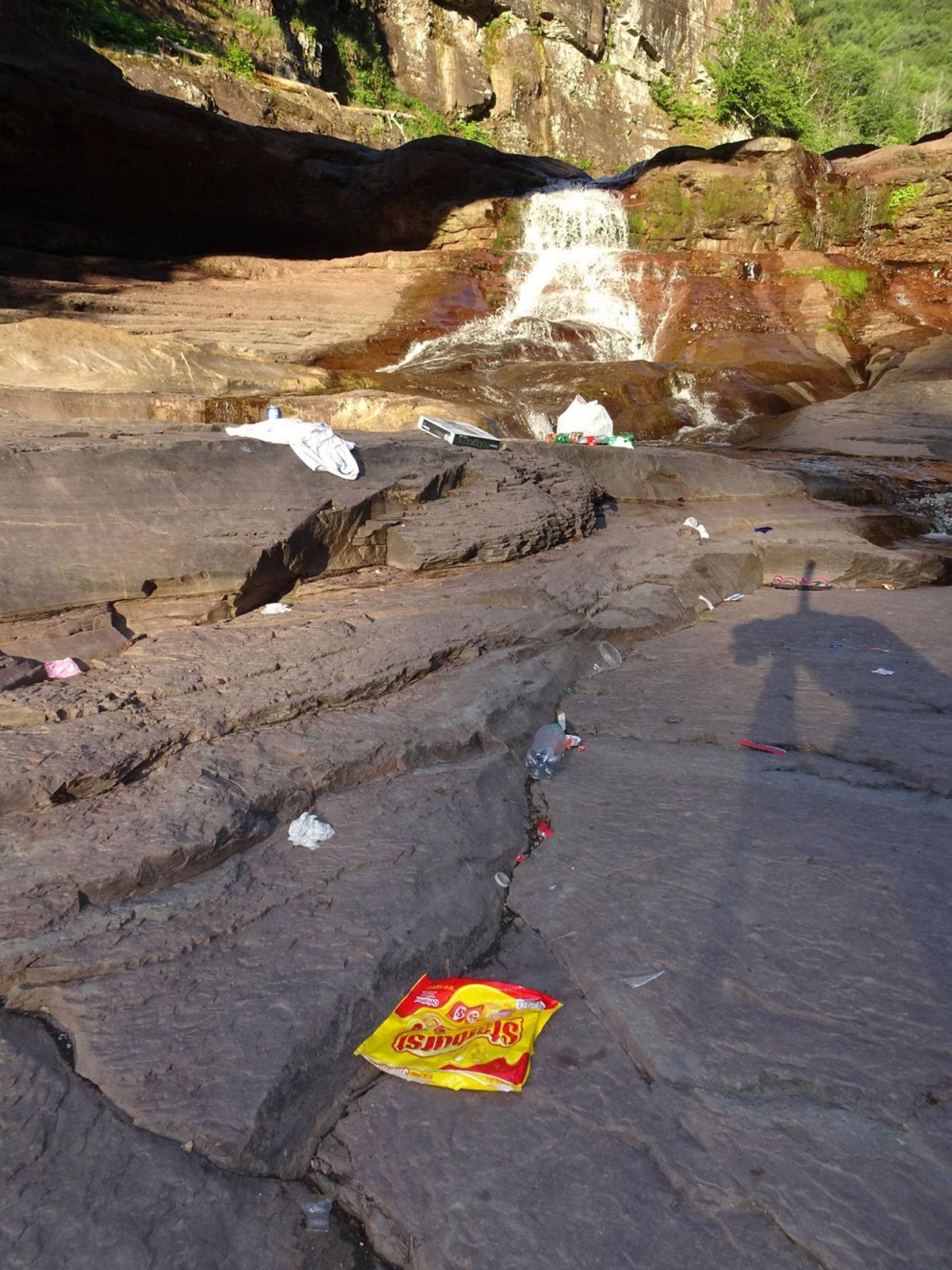 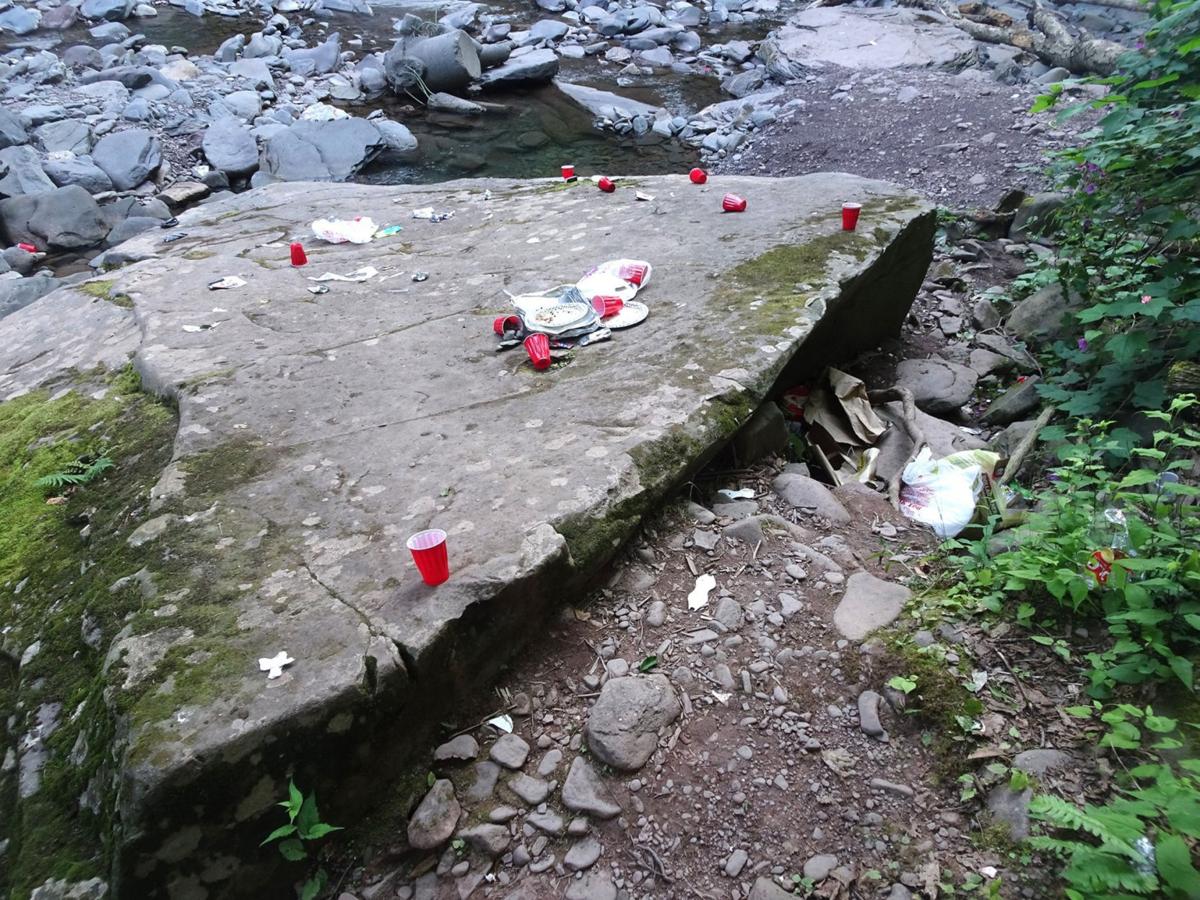 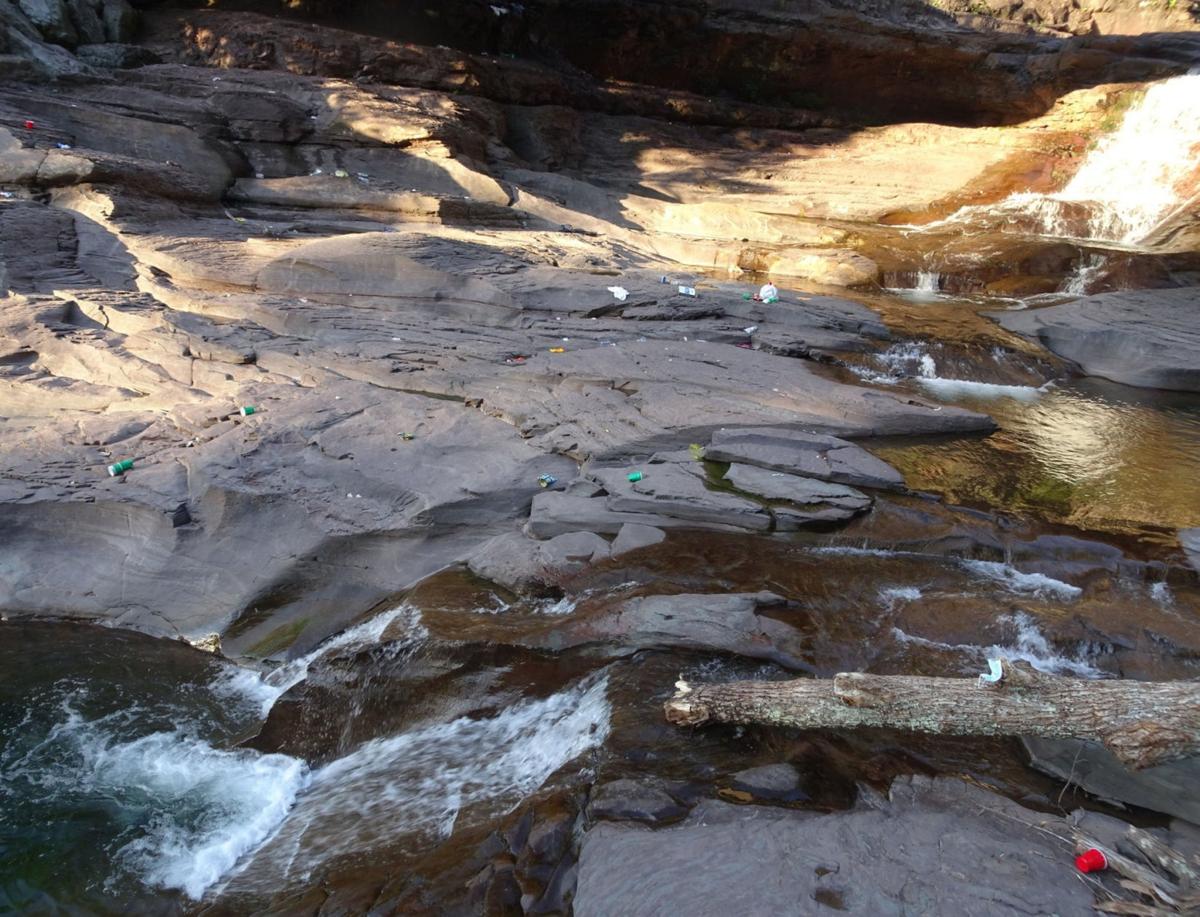 Contributed by Shane Valcich Trash strewn around Kaaterskill Clove. State and local officials are working to develop a strategy for resolving the overcrowding problem at the Clove.

Contributed by Shane Valcich Trash strewn around Kaaterskill Clove. Friends of Kaaterskill Clove founder Zoe Moore circulated an online petition to protest the environmental abuses at the Clove. More than 1,000 signatures have been recorded on the petition.

Town Supervisor Daryl Legg and representatives from DEC could not be reached for information about the outcome of the meeting.

Zoe Moore of Catskill, founder of Friends of Kaaterskill Clove, decided to take matters into her own hands by starting an online petition calling for a solution to the illegal parking and littering.

“I made the petition because all the time I see everybody complaining about the issues, I thought, well then, maybe we should actually do something about it,” Moore said.

In less than 48 hours the petition got more than 1,000 signatures and was approaching 1,500 by Friday.

Moore plans to send the petition along with a detailed letter explaining the issues and proposed solution to Gov. Andrew Cuomo and DEC Commissioner Basil Seggos, she said.

“I’m really thankful so many people have stood behind me on this,” she said. “I had no idea there were so many people out there that felt as passionately about this as I do.”

Moore drives up Route 23A on her way to work each day, and picks up garbage on her way home, she said.

“It’s not just trash but it’s the overuse,” she said. “That road has eroded.”

“People don’t care about the parking signs, they rip them down,” Moore said. “I’ve been leaving 20 to 30 minutes early because of all the people and the cars. It’s gotten out of hand.”

Although the issues have always been there, Moore said they have become worse due to the swimming areas being promoted on social media.

Shane Valcich of Hunter has visited the Clove his entire life, he said.

“We’re at the point where there are too many people to have public spaces like this,” he said. “Since Instagram there was a noticeable immediate explosion.”

“There are tons of hashtags going out, tons of photos,” he said. “Places no one knew about became common knowledge.”

Overcrowding affects the experience of the swimming holes, Valcich said.

“The experience of the place is based on its natural beauty,” he said. “So many people are coming up. Its destroying the enjoyability of it for people. There are Yelp reviews talking about trash in the parking lots. It impacts us not just environmentally, but also economically.”

Many of the visitors are not regulars to the area, Valcich said.

“They don’t have much of a stake in our game, they visit once or twice a year or a lifetime,” he said. “Ninety percent are here for the first time and don’t seem to return here, a lot are day-trippers.”

Recently the influx of visitors has increased, Valcich said.

“Post-COVID, it’s been almost unbearable,” he said. “Especially after 4th of July weekend.”

Valcich estimated that more than 100 bags of garbage have been removed from the clove this week.

In addition to litter, visitors over the holiday weekend were also leaving human waste near the creek, Valcich said.

If no facilities are available, waste is to be left 200 feet away from water, in a hole six-eight inches deep, according to DEC.

Multiple solutions to the overuse of the creek have been proposed.

“I don’t have problem with people using swimming holes, I use them too,” Moore said.

Moore is proposing that DEC deploy a permit system, she said.

“I think the best solution is to implement a permit system,” she said. “They obtain permit before they get there to control how many people are there.

The garbage problem isn’t so crazy if only 50 people go there. The permits are free, you just have to reserve one.”

Other residents have different ideas about how the problem should be handled, Moore said.

“Other people say the road should be closed off and no swimming at all,” she said. “The locals want to be able to enjoy where we live. They want to use swimming holes that we have been using our whole lives. It would be effective but it wouldn’t make everyone happy.”

Valcich believes a change to access to the creek is necessary, he said.

“Elsewhere in the world, distance keeps people from polluting,” he said. “Hikers tends to pollute less than picknickers. People now access [the creek] from the road. That is too easy. These are hiking trails. I believe if we stop all parking, standing and walking on the road, you can hike to these swimming holes.”

This may limit who can access the creek, Valcich said.

“That distance alone and difficulty of the hike, unfortunately it would exclude people, but it would also eliminate almost all of the garbage needing to be carried there. In my mind it is the only thing we can do. We can’t really close it — it’s Mother Nature. We don’t need to make it easy for people to get pollution in [to the creek.]”

Valcich does not think the permit system would be the best solution, adding that Woodstock has imposed it.

“No one, even people who hike to it, can use it,” he said, adding that the permits are hard to come by.

“We need to protect what it’s meant for,” he said. “I don’t want it to be closed but it’s going to get ruined.”

The town of Catskill took a more aggressive approach, opting to close the swimming hole at Tannery Bridge.

Snow-fencing and signage was put up on Thursday, he said.

“That’s the only thing we have in our toolbox to help solve some of the problems that have been going on,” he said. “People weren’t complying with social distancing or parking regulations. There was disregard for just about everything. In the end we have to strike a balance between allowing people to swim there and protecting the public safety of residents.”

Although no time frame was set for the resolution, Finch said he does not expect swimming at Tannery Bridge to resume this summer.

“It’s safe to say [it will be closed] at least for the summer of 2020,” he said. “There is an influx of a large amount of people coming to the area, the whole 23A corridor has been an issue. We had to take some kind of correction action.”

Kudos to all who are doing amazing work saving the creek. I agree with the brilliant idea if eliminating roadside access from Palenville's Veterans Park to Haines Falls. NYSDEC, DOT, and DOH can solve this crisis before next weekend for the cost of placing a few barrels and saw horses.

Long term solutions could be considered over the winter.

I would be willing to bet that the vast majority of this is from out of state and downstate visitors. Parking tickets aren’t enough. Just this past weekend I went out for a motorcycle ride and coming back down 23A was nearly impassable due to the amount of people crowding the shoulder and “no parking” areas. I’m all for tourism and the income it generates for local businesses, but when we allow out-of-towners to abuse our resources it only serves to punish those of us that reside here.