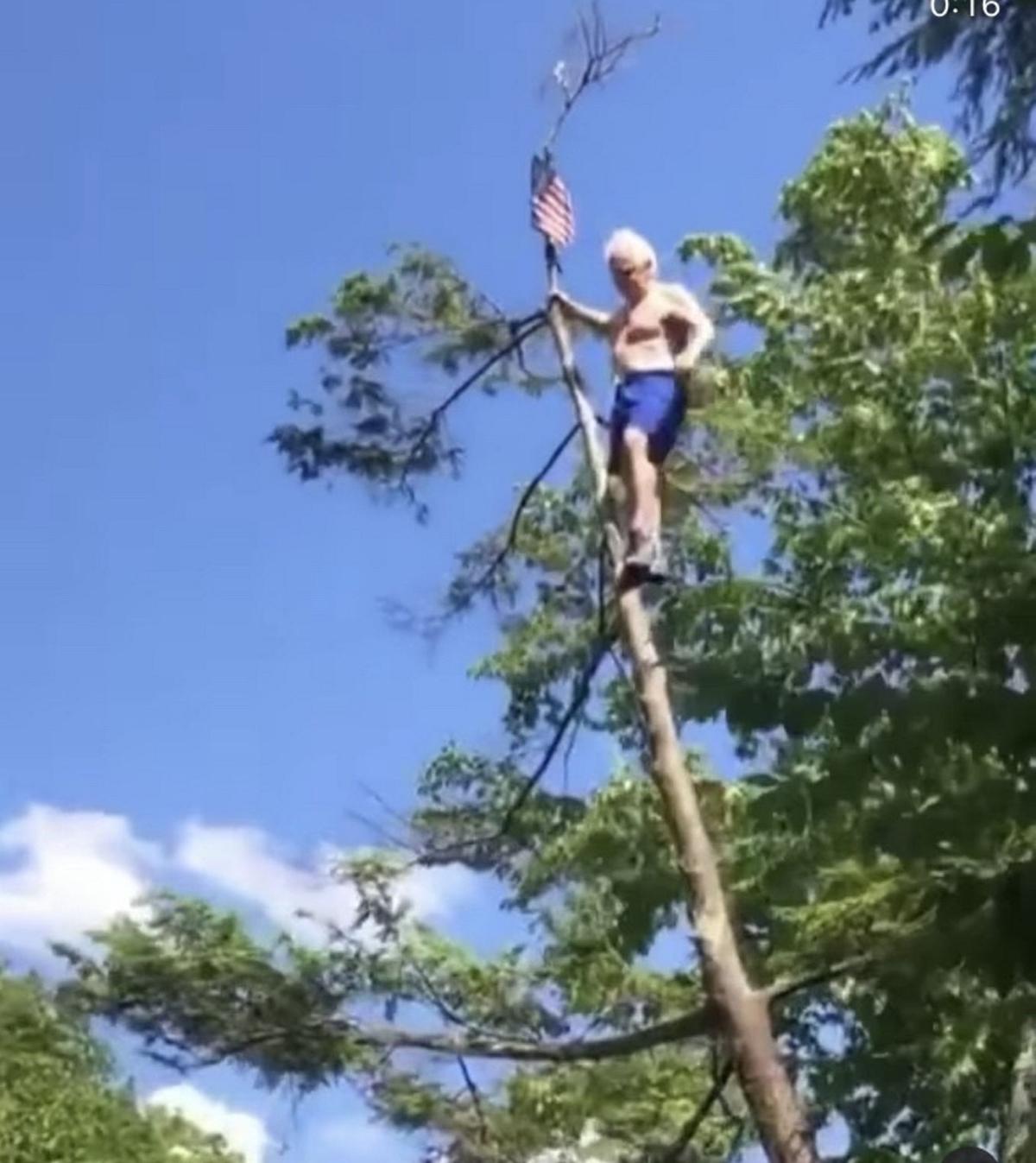 Contributed photoHassan Basagic of Hunter cliff jumps at Fawn’s Leap. Basagic, now 75, says the environment and image of the mountaintop are at stake because of COVID-19 and overcrowding. Basagic was a subject of a Travel Channel documentary on cliff divers in 2016. 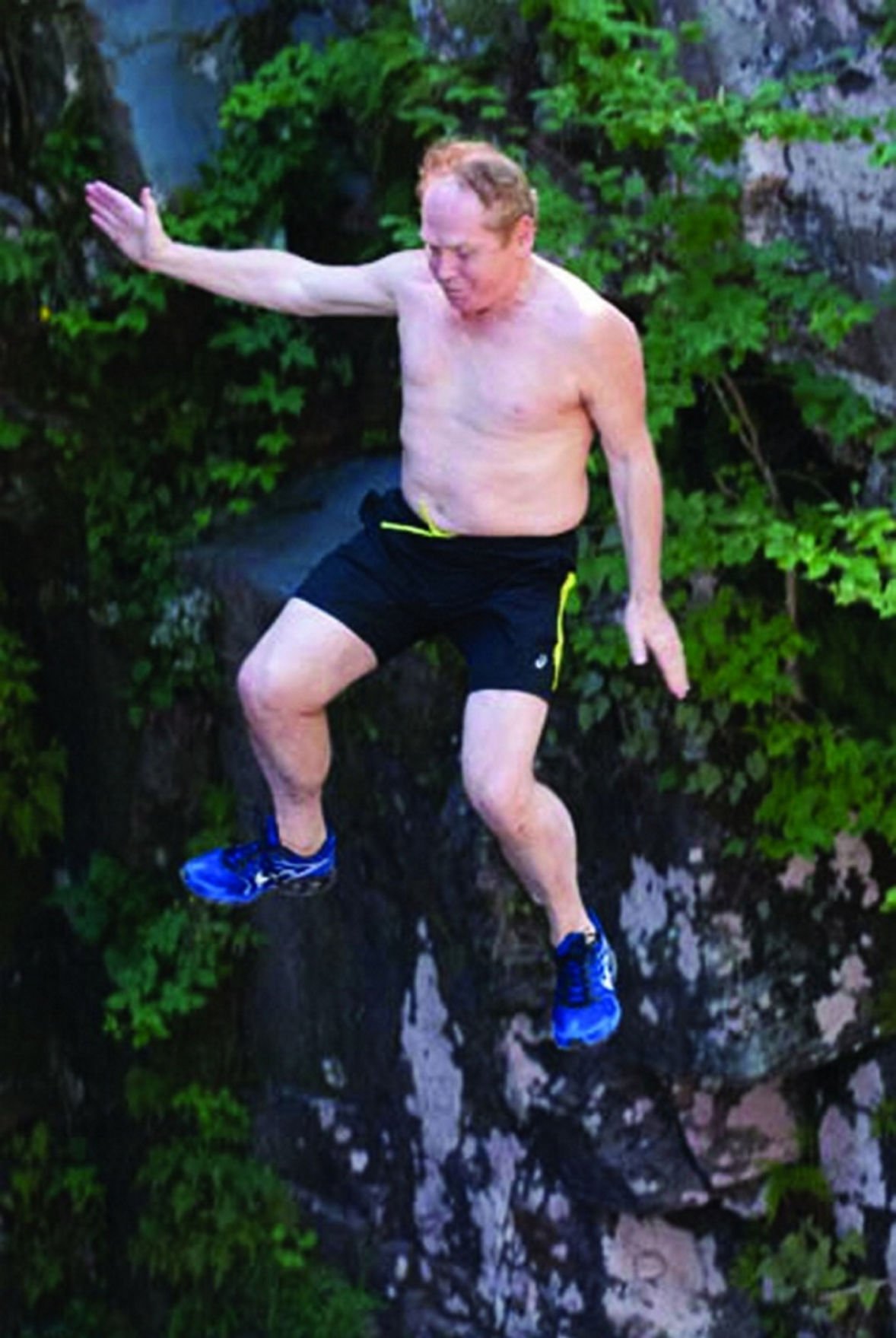 Contributed photoHassan Basagic of Hunter cliff jumps at Fawn’s Leap. Basagic, now 75, says the environment and image of the mountaintop are at stake because of COVID-19 and overcrowding. Basagic was a subject of a Travel Channel documentary on cliff divers in 2016.

HUNTER — Hassan Basagic, 75, is not letting anything get in his way.

In 2016, at 71, Basagic was featured in an episode of The Travel Channel about the daring stunts of cliff diving. Videos of the Hunter resident, who also happens to be one of four Greene Count coroners, climbing trees and making 60-75 foot jumps into Fawn’s Leap have made international news.

Despite his position as a county coroner, Basagic said his hobby is not inspired by a heightened comfort or acceptance of his own mortality — he is well aware of the risks. “I do warn people about the dangers,” he said. “You can have a slip and a fall if you’re not careful. It can be dangerous. We had our first fatality [at Fawn’s Leap] on Aug. 31, 2019. It was a very sad situation. He was scaling down underneath the waterfall and he grabbed hold of a rock underneath and pulled it down on top of him.

It was very sad.”

Basagic has recently become aware of other dangers at the falls, he said.

“There’s a problem there now,” he said. “Local people are not happy with the volume of traffic and illegal parking and the refuse left behind. It affects the image of the mountaintop — that’s the corridor to the community.”

Fawn’s Leap is one of the last remaining areas that Basagic cliff jumps, he said, adding that he used to swim at Furlongs in East Durham. The Dean’s Mills swimming hole in Durham was closed to swimmers in August 2015 by the town board after property owners along the creek complained of littering and rowdy behavior.

COVID only adds to the mix of concerns for the high volume at these areas. The state Department of Environmental Conservation closed Kaaterskill Falls to prevent visitors from congregating there in April.

“The falls, viewing platform and access trails are relatively small areas which concentrate recreationists such that proper social distancing, as recommended for reducing the spread of COVID-19, is not practicable,” according to DEC.”

The town of Hunter is exploring management options with the state, Town Councilman David Kukle said.

“Something needs to occur,” Kukle said. “It’s becoming an unsafe, unsanitary situation down there.”

Town Supervisor Daryl Legg and another town board member will be meeting with DEC, the state Department of Transportation and state police to discuss mitigation strategies this week, Kukle said.

DEC Forest Rangers and staff are working closely with state agency partners, local law enforcement, community stakeholders, and other partners to help address challenges associated with increased use in the Kaaterskill Clove/Fawn’s Leap area and other areas in the Catskills, according to DEC. DEC Forest Rangers actively patrol the area to educate visitors about sustainable use and Leave No Trace principles and issue tickets as appropriate. In June, more than 500 parking tickets were issued in the area. The department has also launched a Play Smart, Play Safe, Play Local campaign to encourage New Yorkers to engage in responsible outdoor recreation during the pandemic. Other municipalities are also being affected, Kukle said, adding that the town of Catskill is having conversations about Tannery Bridge in Palenville and the town of Woodstock has closed Big Deep swimming holes.

There are several areas of concern, Kukle said.

“There’s the parking, the litter, the concern about the human waste going on within the creek because there are no bathrooms down there,” he said. “There was a bear feeding on a buffet breakfast at Fawn’s Leap this morning that almost got hit by a car.”

“They have complete disrespect for traffic laws,” he said. “They park underneath signs that say no parking. They double park. You wouldn’t be able to get a rescue vehicle through there.”

The falls are a key part of the mountaintop community, Kukle said.

“It’s a way to get out to outdoors but they don’t know how to appreciate it. They’re over-loving it.”

Although the falls are dear to his heart, if things don’t change, Basagic foresees closure as a possibility, he said.

“There is going to have to be a study done and if they elect not to provide additional parking and monitoring, they’ll have to close it,” he said. “That’s what seems to be the attitude right now.”

500 tickets issued in a month is a clear sign that NYSDEC is not living up to the Catskill Park Management Plan Article 14. Kaateresill Clove and Colgate Lake are legally designated Wild Forest areas. Recreational use in these types of areas needs to be limited to casual and small group use. Both areas are currently being used as Intensive Recreation Areas. Groups above 20 people, high intensity recreation (Like a boat launch, ski resort or camp ground) are strictly prohibited. The DEC's inaction violates the public trust and degrades our natural heritage.

There has never been a base line biosurvey of Kaaterskill CLove. In the 1987 management plan for the Kaaterskill Wild Forest mentions several species which require stewardship. We don't know what could be getting trampled underfoot by the overcrowding going on in the waterway.

All of these abuses have a simple tried and true remedy employed by parks management all across the state. Simple barriers like the ones already used at Molly Pitcher parking lot are highly effective, non-confrontational, and very, very low cost.

There is abundant documentation of abuse to Kaatersill Clove and Colgate Lake. This problem could be solved before next weekend. Where are our community's do good lawyers?

The rangers are going to have to start going into the clove and ticketing people for loud music, open flame and glass bottles. It’s getting ridiculous. Those little parking tickets do nothing to deter the hoards of people who come with giant coolers, speakers, and even full sized grills! It’s beyond stupid. They don’t realize where they are and they don’t respect the natural beauty. It’s simple if someone is playing loud music - ticket. If someone has a fire or grill - ticket. Glass bottle in their hand - ticket. Please keep our Catskills clean and beautiful!

I agree. We need to preserve our Catskills!