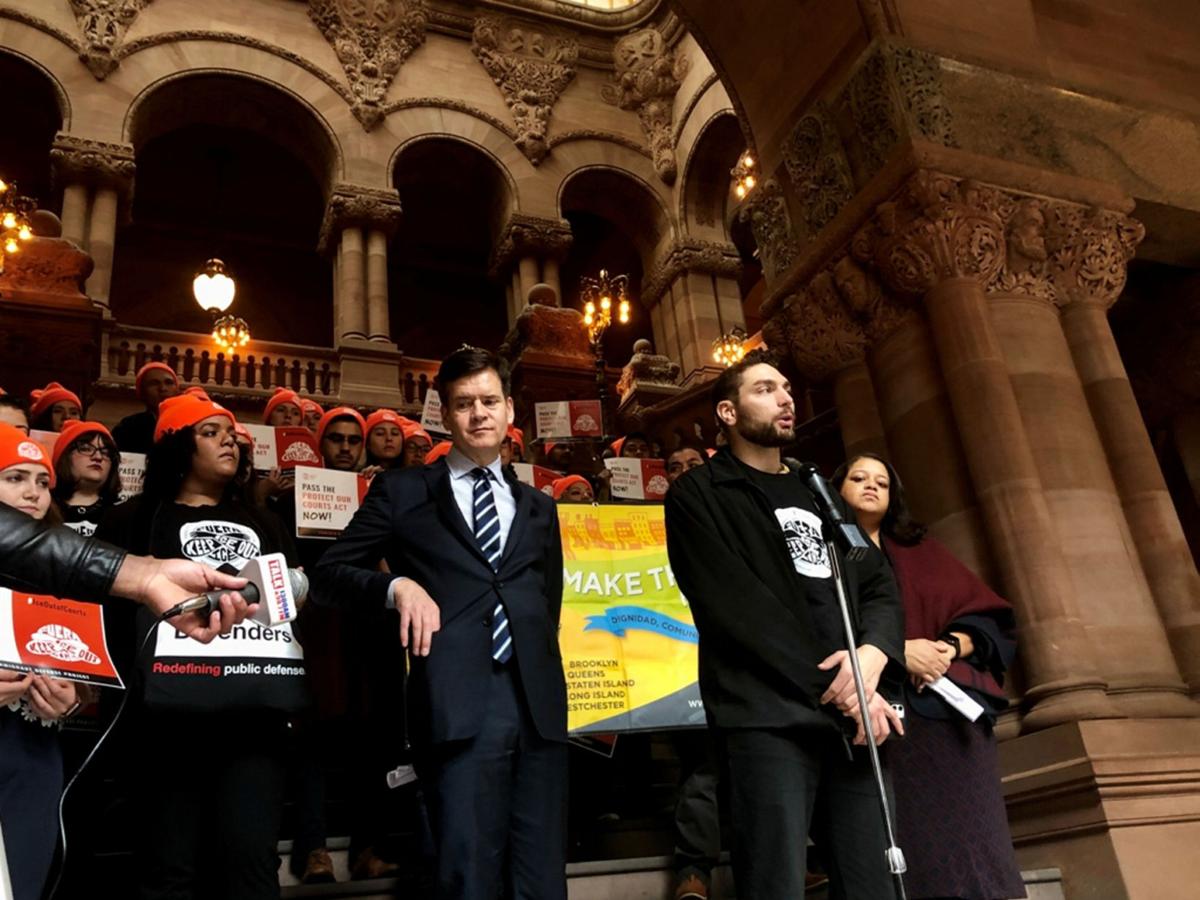 Massarah Mikati/Columbia-Greene MediaBryan MacCormack, executive director of Columbia County Sanctuary Movement, addresses a rally to support the Protect Our Courts Act. The legislation would bar U.S. Immigration and Customs Enforcement agents from making immigrant arrests in and around courthouses. 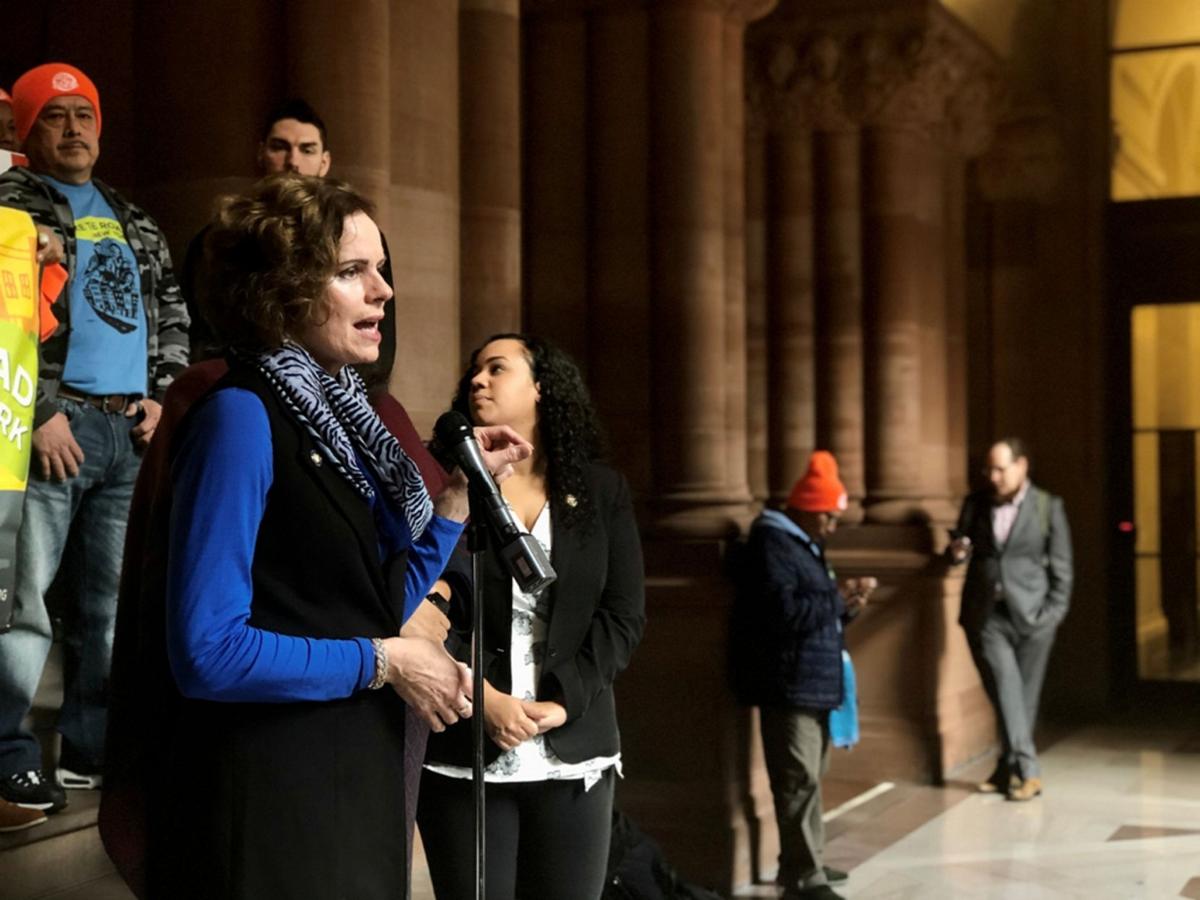 Massarah Mikati/Columbia-Greene MediaAssemblywoman Patricia Fahy, D-109, speaks at a rally Tuesday at the state Capitol to support the Protect Our Courts Act, which would bar U.S. Immigration and Customs Enforcement agents from arresting immigrants in or near courthouses.

Massarah Mikati/Columbia-Greene MediaBryan MacCormack, executive director of Columbia County Sanctuary Movement, addresses a rally to support the Protect Our Courts Act. The legislation would bar U.S. Immigration and Customs Enforcement agents from making immigrant arrests in and around courthouses.

Massarah Mikati/Columbia-Greene MediaAssemblywoman Patricia Fahy, D-109, speaks at a rally Tuesday at the state Capitol to support the Protect Our Courts Act, which would bar U.S. Immigration and Customs Enforcement agents from arresting immigrants in or near courthouses.

ALBANY — The start of the second year of a Democratic-controlled state Legislature has the majority excited and optimistic about the passage of bills on their agenda, and on Tuesday, some Democratic lawmakers were certain the Protect Our Courts Act would be one such bill.

Joined by dozens of advocates and activists, Assembly members and state senators gathered at the Million Dollar Staircase in the State Capitol to support the legislation that would bar U.S. Immigration and Customs Enforcement from making civil immigration arrests in and around state courthouses without a judicial warrant or order of authorization.

“Our courthouses should be sanctuaries for justice, not hunting grounds for federal ICE agents to round up our immigrant community,” Sen. Brad Hoylman, D-27, and Senate sponsor of the bill, said at the rally. “It’s up to New York to stand up to this irresponsible, un-American behavior.”

The rally took place the same day the nonprofit organization Immigrant Defense Project released a report detailing an exponential rise in ICE arrests in and near courthouses under the Trump administration.

Arrests across the state have skyrocketed by 1,700% since 2016, according to the report. And despite a directive issued by the New York Office of Courts Administration that required ICE to issue judicial warrants to make arrests in New York courthouses, ICE continued to make a large number of arrests within the area — 80% of which were conducted outside courthouses.

“These are human beings behind all these numbers,” said Mizue Aizeki, deputy director of the IDP. “These are practices of an agency that doesn’t care about human rights, all they care about is their deportation quota.”

The bill has earned support from public defenders and district attorneys, who have said the chilling effect of ICE arrests among immigrant communities has obstructed their criminal cases as immigrants are afraid to appear in court as victims or witnesses. There is a pending lawsuit against ICE in the Southern District of New York, filed by state Attorney General Letitia James and Brooklyn District Attorney Eric Gonzalez, over making such arrests.

As advocates and legislators stood at the microphone to speak at the rally, though, it was clear they believed this is the year the bill, which is being reviewed in Codes Committee, will pass. There are 34 co-sponsors of the Protect Our Courts Act in the Senate, including Senate Deputy Majority Leader Michael Gianaris, D-12, and 80 more co-sponsors in the Assembly.

“We had an incredibly positive response to this legislation and I’m hopeful we will get it passed soon,” Hoylman said. “We know that we gotta pass this legislation to ensure that courthouses are viewed as sanctuaries of justice by our immigrant populations.”

5 tips to save on higher energy costs

5 tips: How to create your own private spa at home