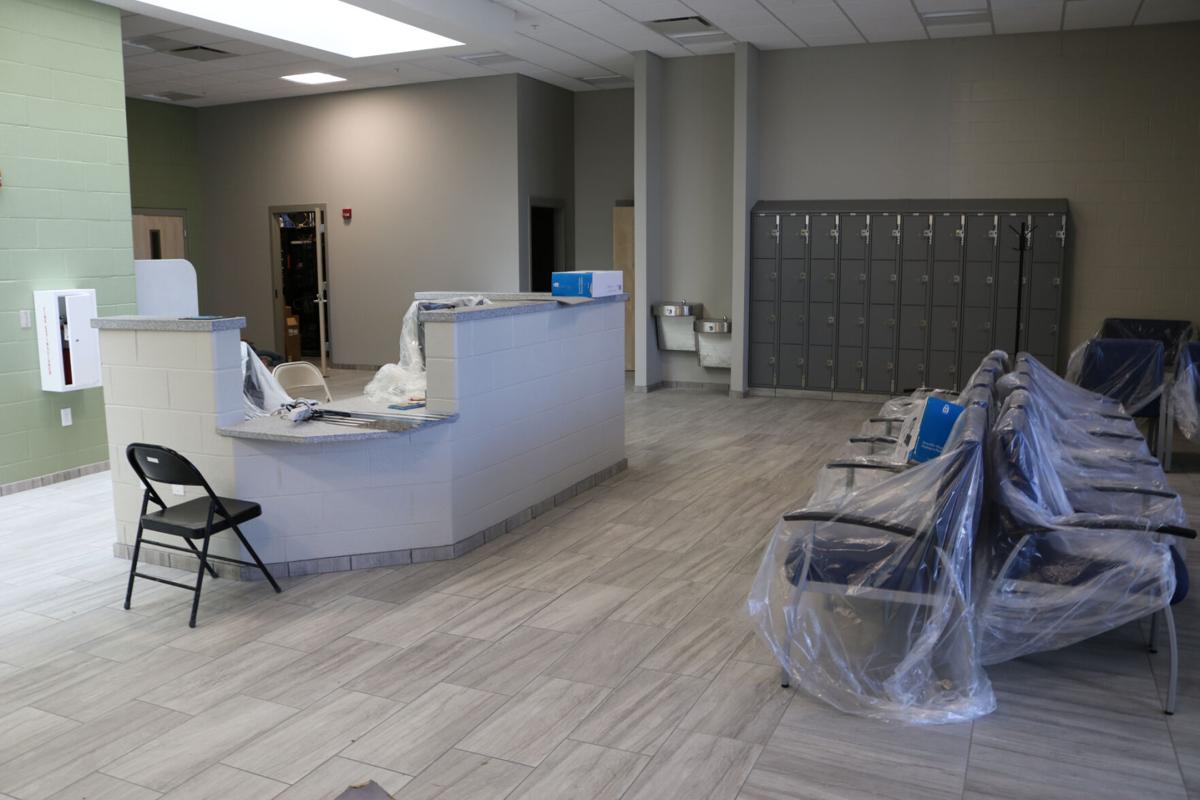 The reception area for the jail. Sarah Trafton/Columbia-Greene Media 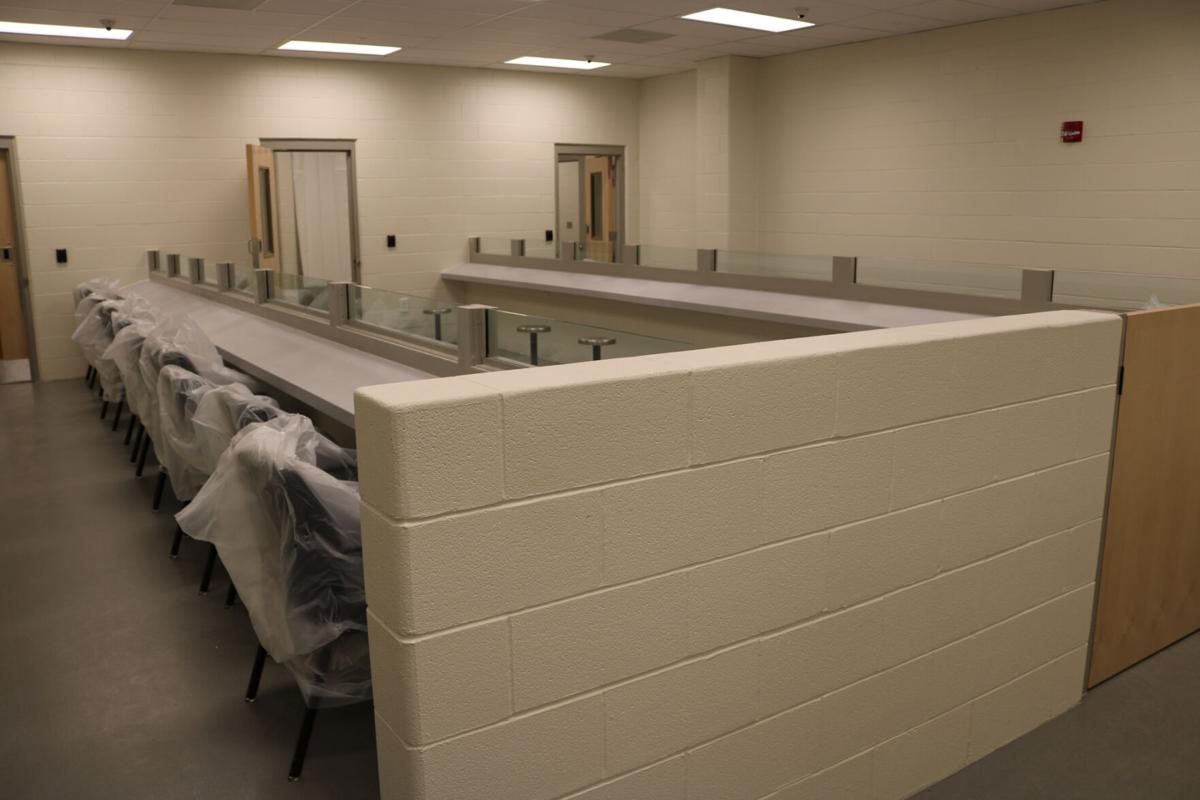 The visitation room at the new jail. Sarah Trafton/Columbia-Greene Media 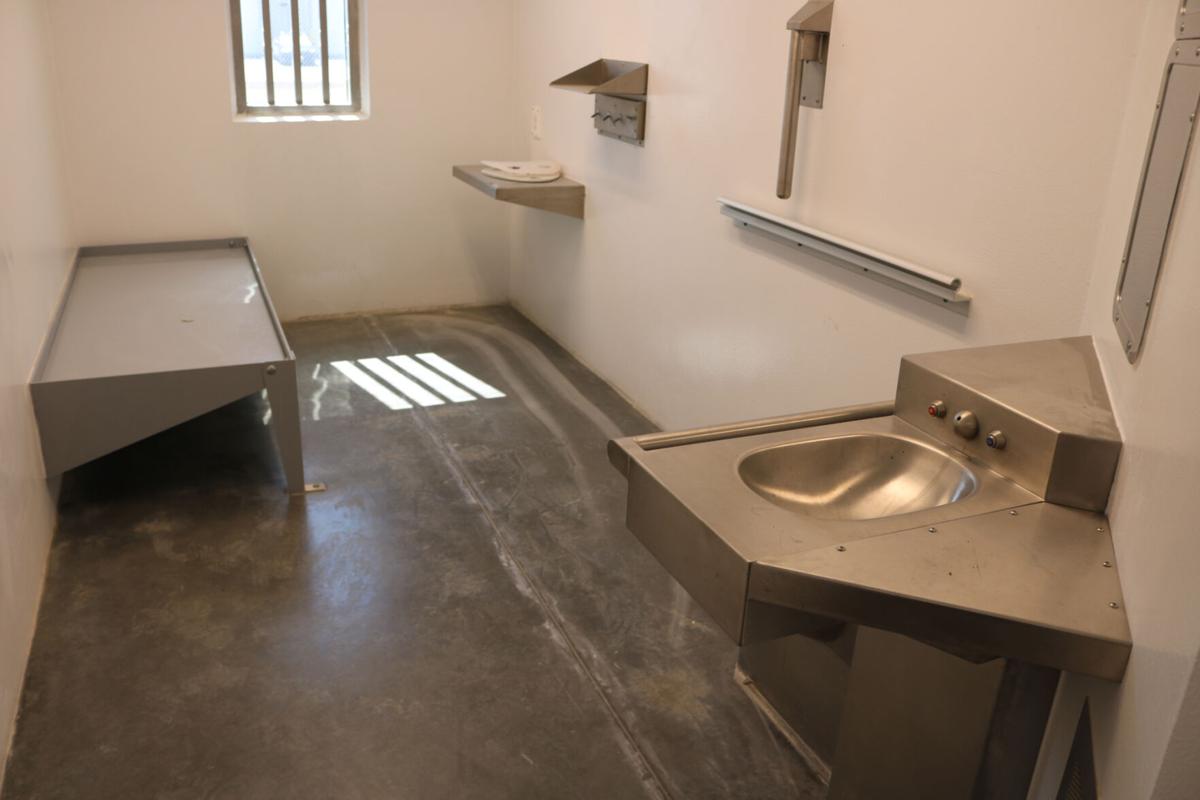 Inside a cell at the new jail. Sarah Trafton/Columbia-Greene Media 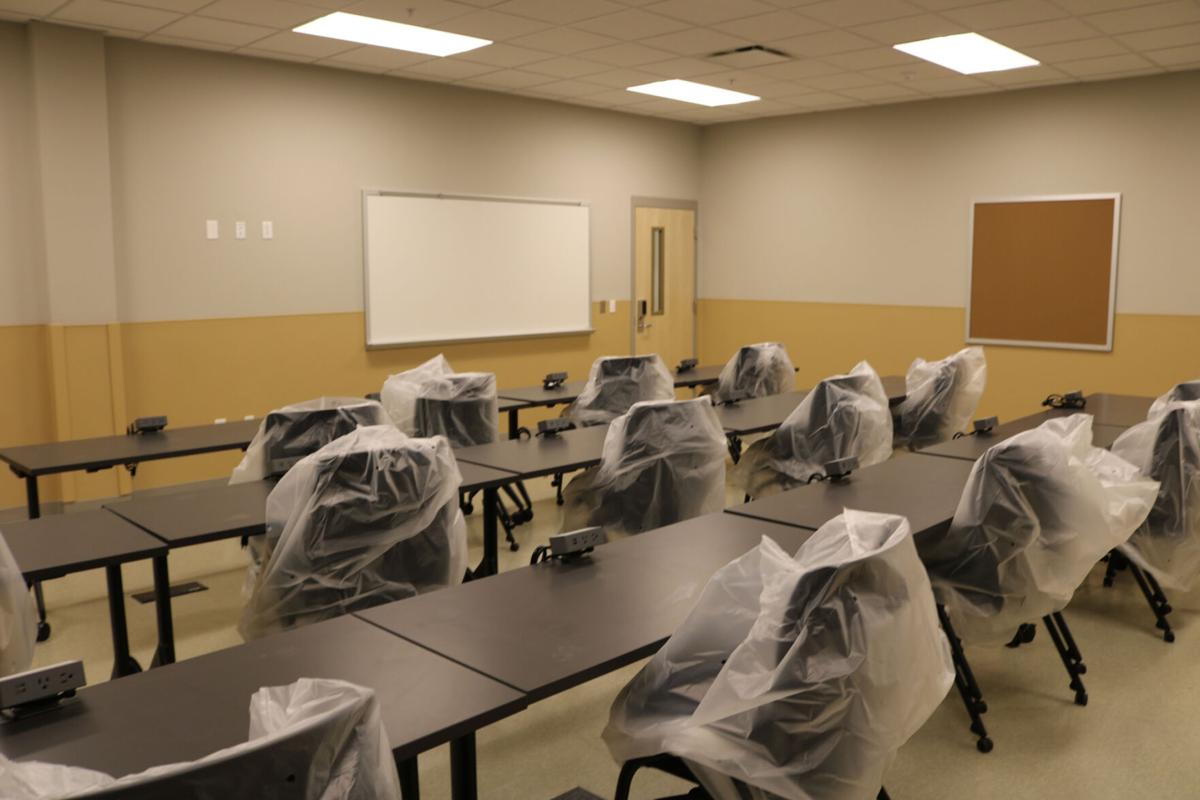 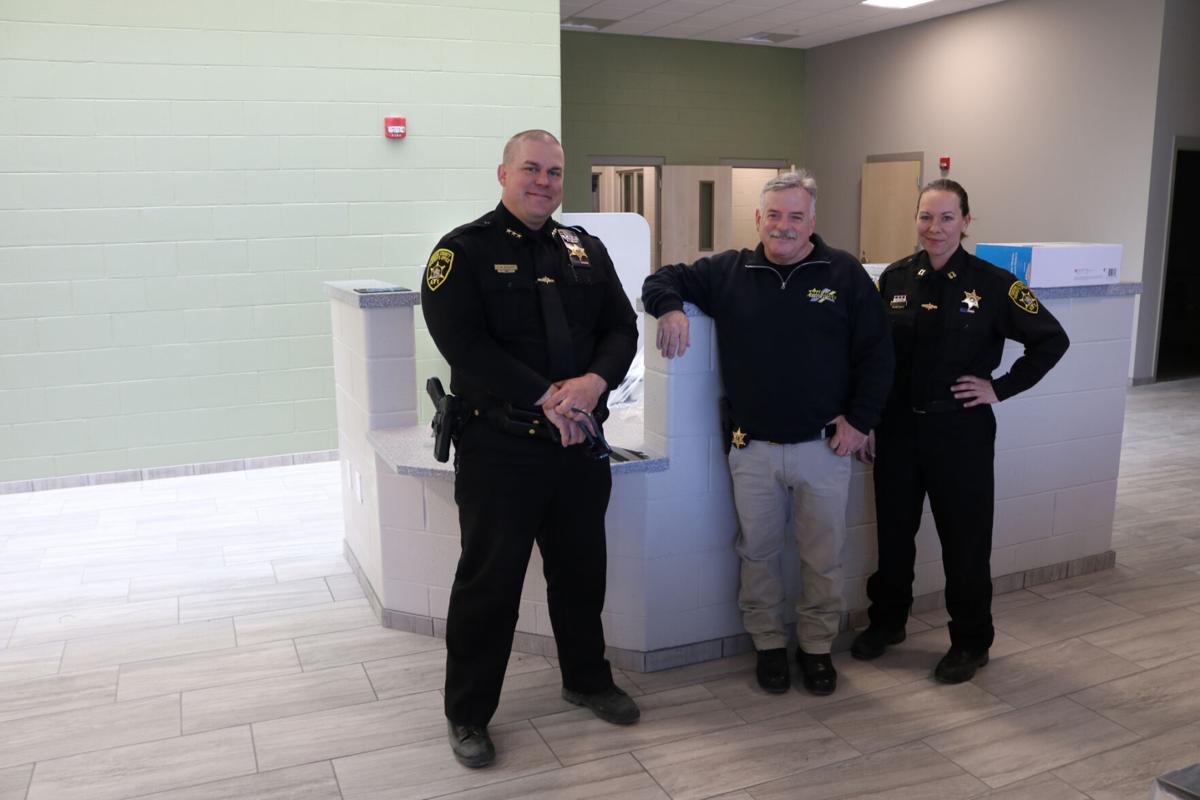 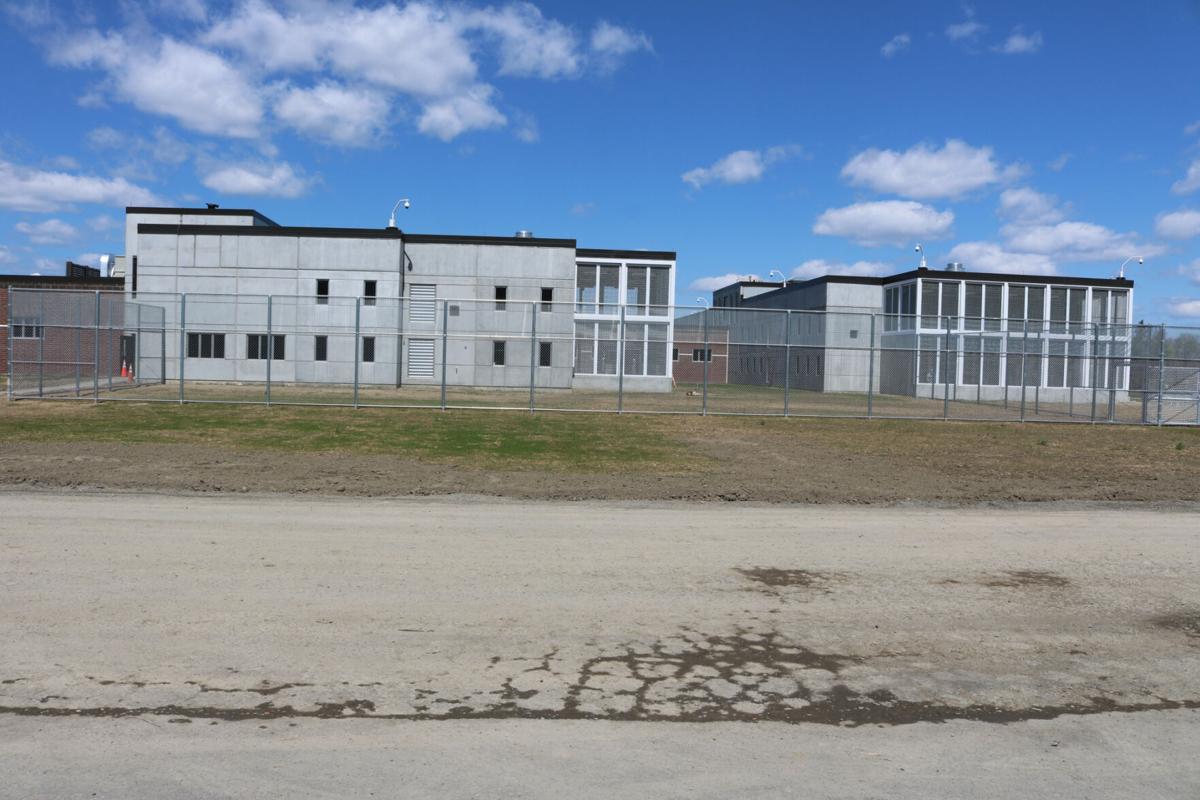 The Pennsylvania-based firm Prime Care Medical was hired by the Greene County Legislature to treat inmates and staff at the new jail in Coxsackie. Lawmakers opposing the hiring said the cost of the plan is too high. File photo 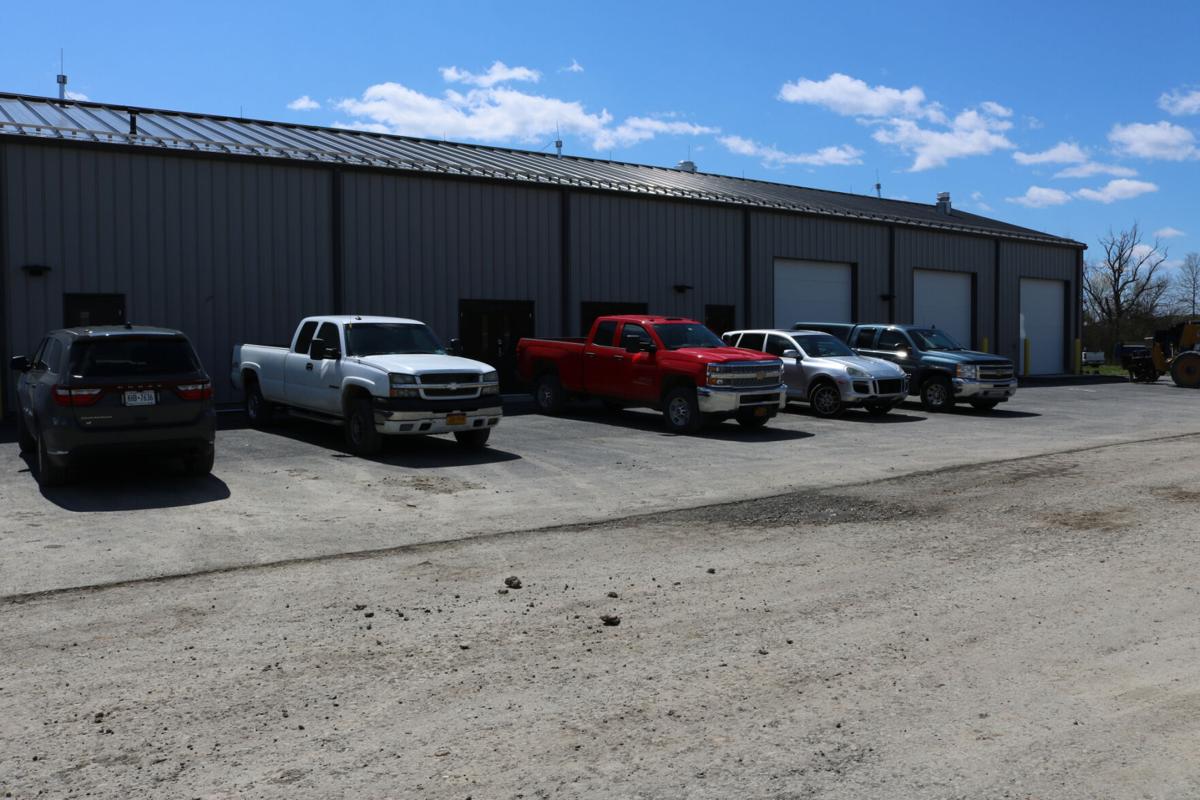 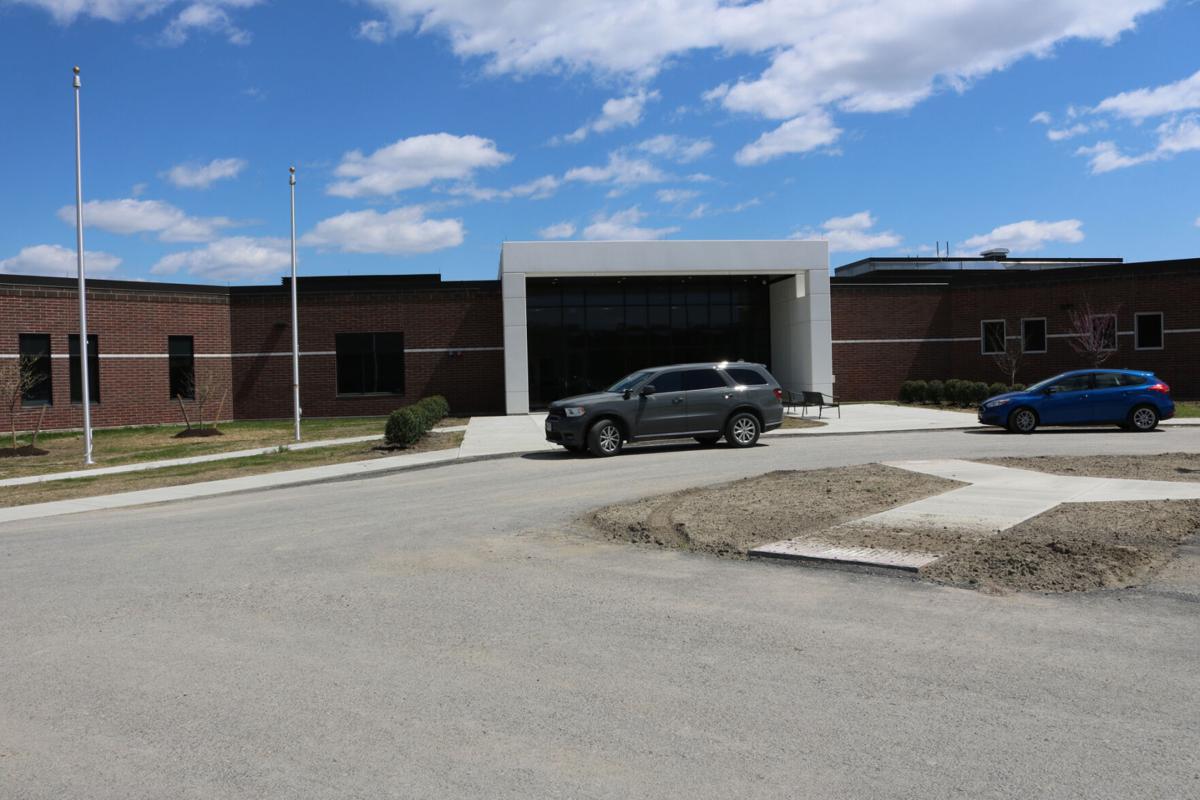 The entrance to the new jail facility. Sarah Trafton/Columbia-Greene Media

The reception area for the jail. Sarah Trafton/Columbia-Greene Media

The visitation room at the new jail. Sarah Trafton/Columbia-Greene Media

Inside a cell at the new jail. Sarah Trafton/Columbia-Greene Media

The Pennsylvania-based firm Prime Care Medical was hired by the Greene County Legislature to treat inmates and staff at the new jail in Coxsackie. Lawmakers opposing the hiring said the cost of the plan is too high. File photo

The entrance to the new jail facility. Sarah Trafton/Columbia-Greene Media

The new facility consists of 80 cells, 64 of which are furnished; an administrative section and the hotly contested $1 million garage.

The project was funded by a $39 million bond from Robert W. Baird & Co. Inc. at 2.49% interest and an $8.1 million contribution from the county.

The county anticipates accepting inmates at the new facility starting in July. The county closed the former jail, located on Bridge Street in Catskill in April 2018, citing structural concerns. The former jail and sheriff’s office were demolished in November 2020. The sheriff’s office moved to temporary quarters on Mansion Street in Coxsackie in February 2019, where it has remained until this week’s move.

“It’s pretty incredible they didn’t have one lost workday to COVID for anybody,” he said.

The county on Friday had 37 inmates, two of whom were female, Greene County Sheriff Pete Kusminsky said, which puts the new facility near capacity.

The jail will contain 16 cells for female inmates and 48 for men. Eight female cells and 16 male cells are reserved for special classifications such as suicide watch, and are not for general population, Kusminsky said.

The state Commission of Correction also requires 10% of the cells to remain open.

The new building is designed for direct supervision, where up to 32 inmates can be monitored by one corrections officer at a post within the pod equipped with security footage and one officer acting as a “floater,” Kusminsky said.

Some other novelties at the facility include male and female locker rooms for the deputies and corrections officers, which they did not have at the old office, Kusminsky said.

The 5,600-square-foot garage contains a garage bay specifically for storing vehicular evidence and is the first evidence storage of its kind in the county, Kusminsky said.

The garage will house the sheriff department’s smaller boats, UTVs and other equipment, Kusminsky said. The large boat will remain at the Historic Catskill Point and the dive van will continue to be stationed in Cairo.

The garage also contains a training room for defensive or lecture-based training, where Kusminsky hopes to have countywide law enforcement training.

With the administrative and road patrol divisions moved over, the sheriff’s office will start processing pistol permits at the new building on Monday, Kusminsky said.

The corrections division continues to operate at 370 Mansion St., although the county is aiming to get approval from the state Commission of Correction to process inmates at the new facility soon, Kusminsky said.

There are several multi-purpose rooms in the jail where inmates will be able to earn their GED diplomas, work on resume writing and see counselors or clergy members, Kusminsky said.

The county is still finalizing contracts with service providers, Kusminsky said. The Rev. Richard Turpin of Second Baptist Church in Catskill will be one of the clergy members available.

One of the rooms is designed to hold on-site arraignments, Kusminsky said.

Until the new facility opens, the county’s inmates are being boarded at the Albany, Ulster and Columbia county jails for $70 to $75 per day per inmate.

The Pike Company, of Albany, oversaw the project.

We simply cannot celebrate human cages people. The people running this are neither educated nor competent. It's not my opinion. This is YOUR tax money people.

The vast majority of people held in a county jail were detainees. They generally are not convicted. There is a new imperative to prosecute people so the county has inmates, which itself is a horrible premise. It's a punish to justify the abuse of power costs and methods.

80 Bridge Street was demolished to get a technical exception to the 2% tax cap laws. I proved, arduously, and by Barton and Loguidice’s report, there were no significant structural defects. Demolishing the historic building wasted $6.2 million in assets – for a non-income producing parking lot.

The idiotic jail project has a $1.2 million airconditioned and heated garage, a Garage Mahal. When Sheriff Pete Kusminsky saw the staff locker room, he commented that it looked like an NFL locker room. There’s a gym for the staff, but just “fresh air” space for detainees.

The adjoining county jails are 85% empty – Albany, Columbia, and Ulster. Sharing these empty jails was always perfectly legal. It’s what we did since the jail closed on April 17, 2019.

Tracy Quinn believes my criticism warrants her criminal complaint and an arrest. She wrote that she had not accused her husband of domestic violence, but the record is different. Patrick Linger believes the same. He maintains a criminal complaint for simply attending the January 16, 2019, public hearing. Linger wrote that I asked for public comment, which he said he denied. He wrote that I was drinking and swore, but I do neither.

At a recent trial, I put the Probation Chair Alan Frisbee on the witness stand. I asked if he took any psychology during college. He said he couldn’t remember if he took psychology in school. I said: “Isn’t what you do primarily behavioral?”

When I deposed the Greene County Mental Health Clinical Director Jason Fredenberg, he said he didn’t diagnose because they’d have to treat him. That’s blatant malpractice, and it’s consequential.

Discovery hasn’t come in from my homeless shelter/Gulag lawsuit, but it appears there are no actual licensed social workers in Greene County DSS. Commissioner Kira Pospesel has an R.N. in emergency medicine, which is entirely different than the 2,000 hours of supervised work and a Masters in Social Service. I haven’t located a single MSW worker there.

Similarly, our Director of Public Health Director Kimberly Kaplan has a woefully inadequate two-year degree. Her position is a product of political patronage. She’s the County Attorney Ed Kaplan’s wife.

The county’s response to COVID-19 is entirely inadequate. Testing for non-symptomatic never occurred. I couldn’t pause jail construction even after proving the workers came from more infected counties. I wrote asking her to order our police to wear masks and got no response.

These massive defects are why our county was rated a “worst offender” by the State Commission of Corrections. http://www.scoc.ny.gov/pdfdocs/Problematic-Jails-Report-2-2018.pdf Ed Kaplan blocked my FOIL demands, but I FOILed SCOC. That record shows five years of placation by Ed Kaplan. When asked about his rating, former Sheriff Greg Seeley said it didn’t matter. They’re not his boss. Our jail had more suicides than any other jail in the state.

We’re left with a nightmare. The money for competent medical assessment and treatment is replaced with police giving lectures to detainees. The incubus harms all of us. These methods are designed to harm the detainee (who is generally accused but not convicted).

These acts harm us morally, which is as important.

The fact that Linger and Quinn arrest me for speaking out indicates that they’re not capable of administrating.

This county attacked my family after 9/11. Severely and repeatedly. I reversed their convictions on appeal. I can forgive, but I cannot forget.

Finally, both the County and Village of Catskill Jail Review Committee reports are feckless. The glossy report from Greene County is utterly empty of any significant reform. Both reports simply consolidated power to our so-called law enforcement.

The background label of “worst offender” is joined by the Oath Keeper problem, an outgrowth of the Ku Klux Klan. Former Sheriff Greg Seeley is not only an Oath Keeper; he’s a featured speaker. Most of the Village of Catskill’s twenty-six all-white officers are Oath Keepers.

How many County Deputies are Oath Keepers? Sheriff Kusminsky hired Greg’s son Mathew. I sued to prevent his hiring based on nepotism rules. The county simply changed its nepotism rules.

Both needed to recuse from jail and police votes, but neither did.

COVID-19 and a pandemic are mutually exclusive. Tourism can’t happen during a pandemic.

There was little or no income here for a year. That didn’t wake up the county or the village. They can’t imagine a real hospital, a community center, or even new money job creation. They can only imagine public sector jobs (37% of jobs in Greene County are public sector). And these are filled with people who lack sufficient educations and credentials.

These same undereducated public officials envision a Gulag for people in our safety net. The barracks-style warehouse is intended to be uncomfortable, according to County Administrator Shaun Groden. Groden, btw, was successfully sued for the same errors in Michigan. https://law.justia.com/cases/federal/district-courts/michigan/miedce/2:2008cv12202/230439/137/

This is our county people. We are the co-creators of the new normal. If you feel helpless to local incompetence, you aren’t alone. But the failure to reform local law enforcement, and its budgets, is a horrific disaster. It requires our effective opposition.

“Scott O. Myers, 67, of Catskill, was arrested at 3:03 p.m. April 16, in Durham, and charged with two counts of second-degree criminal contempt, a class A misdemeanor. His arrestee status was unknown.”

You’re almost in there little buddy!

You really look like a total jack-*ss when you make condescending remarks about everyone you don’t agree with, yet, you can’t stay out of handcuffs long enough to get your own life straight. Pathetic!

Yes, which proves my point.

From what I can see it only proves that when you have a tantrum because you don’t get your own way, you get dealt with according. Hence your latest entry in the police blotter. You talk about hypocrisy, yet, you think the rules don’t apply to you, thus making you the biggest hypocrite out there. Quite the folly on your part.