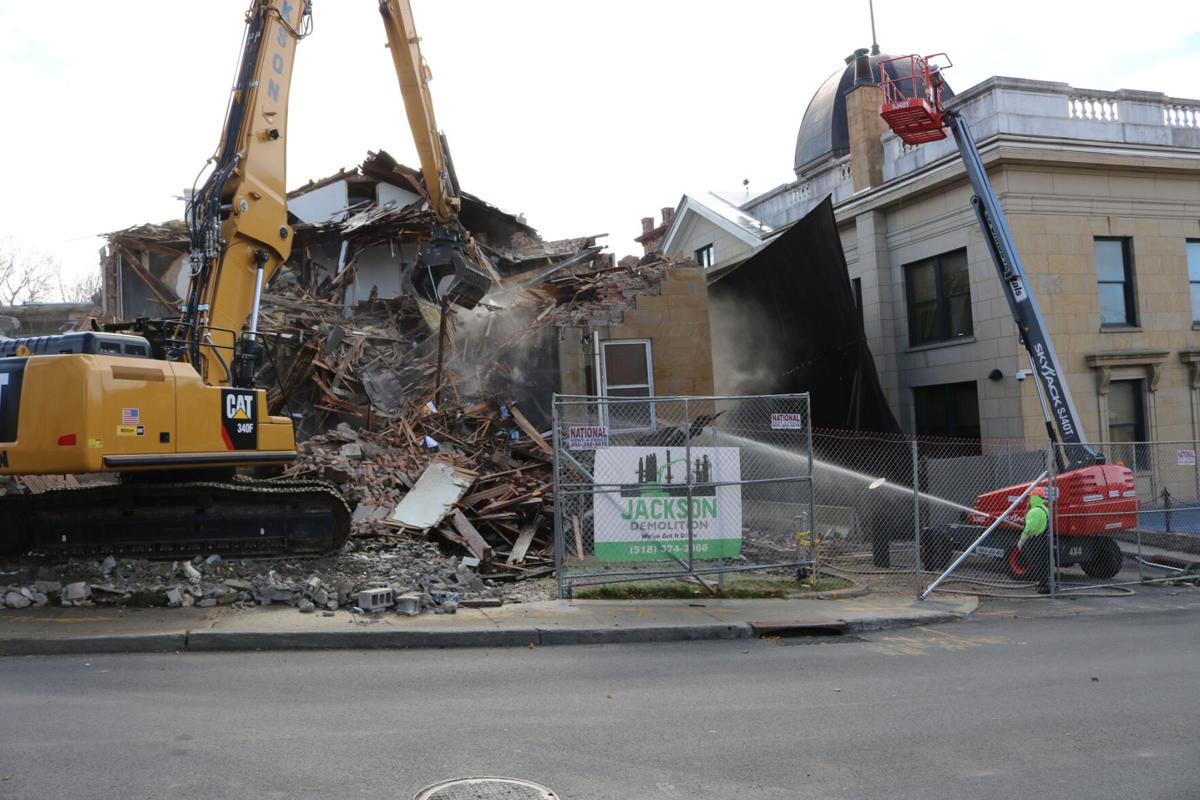 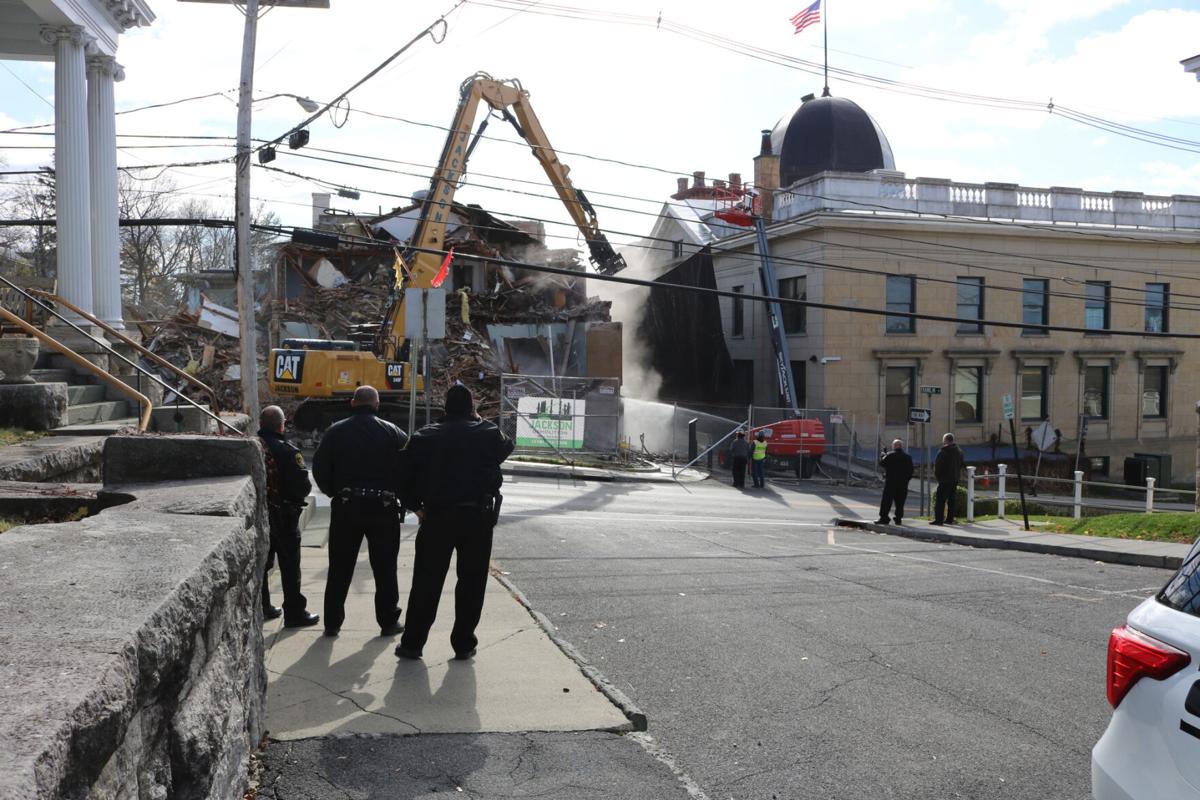 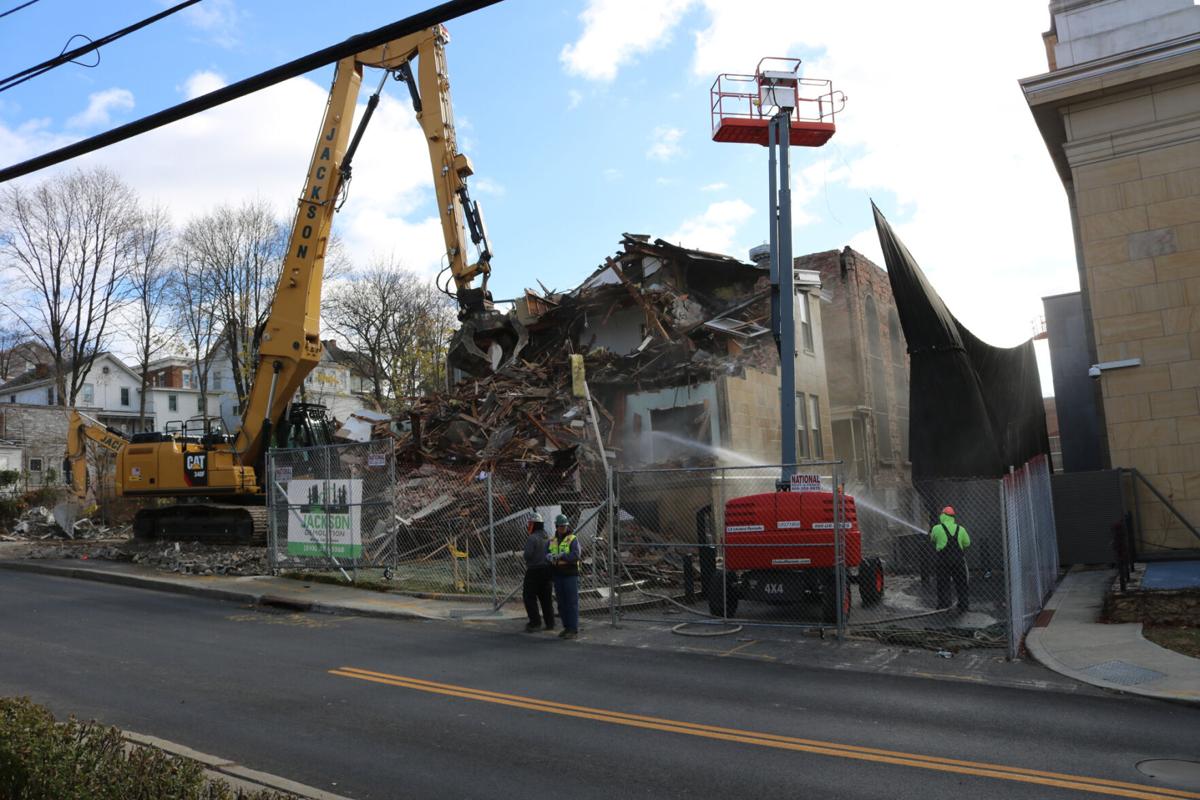 CATSKILL — After years of debate, the former Greene County Jail is in its final hours.

Built in 1908, the county jail and sheriff’s office on Bridge Street in Catskill are listed on state and national historic registries.

The jail was closed in April 2018, following a report by Kaaterskill Associates stating parts of the building were structurally compromised.

Over its century-long history, the jail held many prisoners, but none more famous — or notorious — than gangster John T. Diamond, known as “Legs” for his skill as a dancer.

Diamond, one of the biggest whiskey and beer bootleggers in the Northeast during Prohibition, was known for his merciless tactics. He is thought to have killed more than 25 people.

Diamond was also a local hero, called a “Champion Against the Drys,” for his defiance of Prohibition.

In 1931, throngs of people lined Main Street to see Diamond, still recovering from gunshot wounds, delivered to the jail to serve time for murder.

The Greene County Jail was named to the state Commission of Correction’s 2018 Worst Offenders report, second to Rikers Island, for its improper policies and procedures. The annual report lists the most problematic local and state correctional facilities.

“It’s bitter for some, it’s sweet for others,” he said. “When we did the cost comparison to rehab the building, it was $3 million more than to demo and do a rebuild. So dollar-and-centswise, this was by far the more fiscally responsible plan to take. But there’s a lot of history there and we’re making room now to move forward.”

Meg Nowack, of Historic Catskill, said the demolition is a loss for the community.

“I feel as if it was a really integral part of the grouping that sits on the corner — the courthouse, the jail, the sheriff’s office, the library and the banks were all built in the early 1900s,” she said. “It formed this great grouping that’s really important for the historic district and now this large section is going to be gone and replaced by this parking lot. That’s nothing Catskill can benefit from.”

The property is being eyed for parking and also for office space, Linger said.

“There’s no final decision yet on what’s going to go there,” he said. “We’ve discussed the idea of a parking structure underneath with a building on top. If the Office of Court Administration needs more space, we can do like a footbridge over the alley to the second floor of the courthouse.”

Nowack said she believes the buildings could have served the community in better ways.

“These buildings would have been a lot better if they were reused and contributing to our economy but now they’re nothing and that’s a pity,” she said. “The worst part is they were taken down for no reason. If those buildings were going to collapse, as it said in the engineering report, they would have collapsed by now. They’ve been there for two years.”

Nowack described the demolition as a historic moment.

“It’s just a sad moment for Catskill,” she said. “I think we could have done so much better and turned it into something that was really attractive for visitors and residents, but it wasn’t in the cards.”

“It’s one of those things that needed to be done,” he said. “I know there are people who object to the sheriff’s office coming down. The only thing that might have been salvageable is the appearance on the outside. The buildings were no value to the county or to county residents.”

Lawrence did not see promise in the buildings for reuse.

“Using it for a storefront or place for community service just doesn’t work out in terms of its space,” he said. “It’s going to be better used in the future as an addition to the courthouse.”

The Historic Carriage House on the property will remain, Lawrence said.

“I think the Carriage House is more historic than the sheriff’s office,” Lawrence said. “And the jail itself was in danger of coming down. I’m surprised it took so long. It’s gone but it won’t be missed.”

The demolition contract was awarded in August to Jackson Demolition Service Inc., of Schenectady, in the amount of $344,431. An additional $70,253 was awarded to the company to remove the Ohio sandstone from the exterior of the building. The project is expected to wrap up in December.

The county’s new 64-bed jail on Route 9W in Coxsackie is expected to start accepting inmates in July 2021. The jail project is funded by a $39 million bond from Robert W. Baird & Co. Inc. at 2.49% interest and an $8.1 million contribution from the county. Since the old jail’s closure in 2018, inmates have been boarded at Columbia, Ulster and Albany county jails.

The sheriff’s office moved to a temporary office on Mansion Street in Coxsackie in February 2019, where it will be housed until the new jail opens. The county purchased the temporary office in November 2019 for $400,000.

Geeze Scott....You are again beating a dead horse. The old jail is gone. The new jail is almost complete. Find something new to complain about. The horse is dead and now a skeleton.

Bill Lawrence, a former high school science teacher didn’t o the math. The cost of the new Sheriff’s Office is an insane $90 million new debt. $39 for the loan, $16 million for the interest, $8 million from “reserves” and maintenance and operations. We never needed it at all. Barton and Loguidice reported a cost of $3.9 million to rehab 80 Bridge St. There is no need for anything there other than a few holding cells. The Sheriff’s Office was fine. The shared jail option was always available, and always perfectly legal. The only reason to build that monster in Coxsackie is graft. Employment is never a reason for a Sheriff’s Office or a jail. The purpose of a sheriff’s office is public safety, which here is enormously disproportionate to the need, a similar problem as the Village of Catskill with 24 officers. Justice and bail reform (promulgated by Trump and Cuomo) largely eliminates the need for county jails). But our jail wasn’t closed because of its architecture, it was closed because of the behavior of its management. 5 years of correspondence from their supervisory group, the State Commission of Corrections (“SCOC”) is proof. The number of suicides under Greg Seeley and Michael Spitz’s watch is the same, horrendous. As for money, Greene County took another $2.8 million from “reserves” last month because they couldn’t make payroll. This county, according to BuyInGreene, has an unsustainable 385 public sector employment. Most governments have a 5 - 10% public sector ratio. Really really bad management. Now factor in the effect of COVID-19. Pathetic. That stupid new jail has a $1.2 million heated and air conditioned garage! What on earth were these people thinking. Finally, the court doesn’t need any more office space, the courthouse is huge. It was, BTW, recently rehabbed - just like the Sheriff’s Office could have been. Pathetic.

OH SHUT UP, Scott Myers. You don't work. You don't pay taxes. Go crawl back in your hole.

Kaaterskill recanted their baloney report. There was nothing wrong with the building that couldn’t be affordable rehabbed. Pathetic. The Village of Catskill went along with this trash. Vincent Seeley told me: “We had to. They’re psychotic. They’d retaliate.” The county destroyed this perfectly good building to fake an “exception” to the 2% tax cap laws. No old Sheriff’s Office means a new one is “required.” This means we have. New unjustifiable $90 million debt load, a 20% tax increase for 30 years. None of the contractors were from Greene County. None of the $16 million in interest from the $39 million loan stays in Greene County. Ulster, Albany and Columbia County jails are each 80% empty, a result of justice reforms passed by Trump and Cuomo. The shared jail option was at all times perfectly legal. As evidence, the much more needed Catskill Community Center was defunded. Pathetic. This demolition yields a non-income producing parking lot. While BuyInGreene paints a rosy economic picture Central Hudson’s Out Of Alignment reports a declining per capita and population - before COVID-19. The county took $8million from reserves for this disaster. Last moth they took another $2.8 million because they couldn’t make payroll. Pathetic!

Get outside this summer with these 4 exciting activities

3 tips for a carefree summer

Launching a tech startup: How to build a foundation to scale and succeed