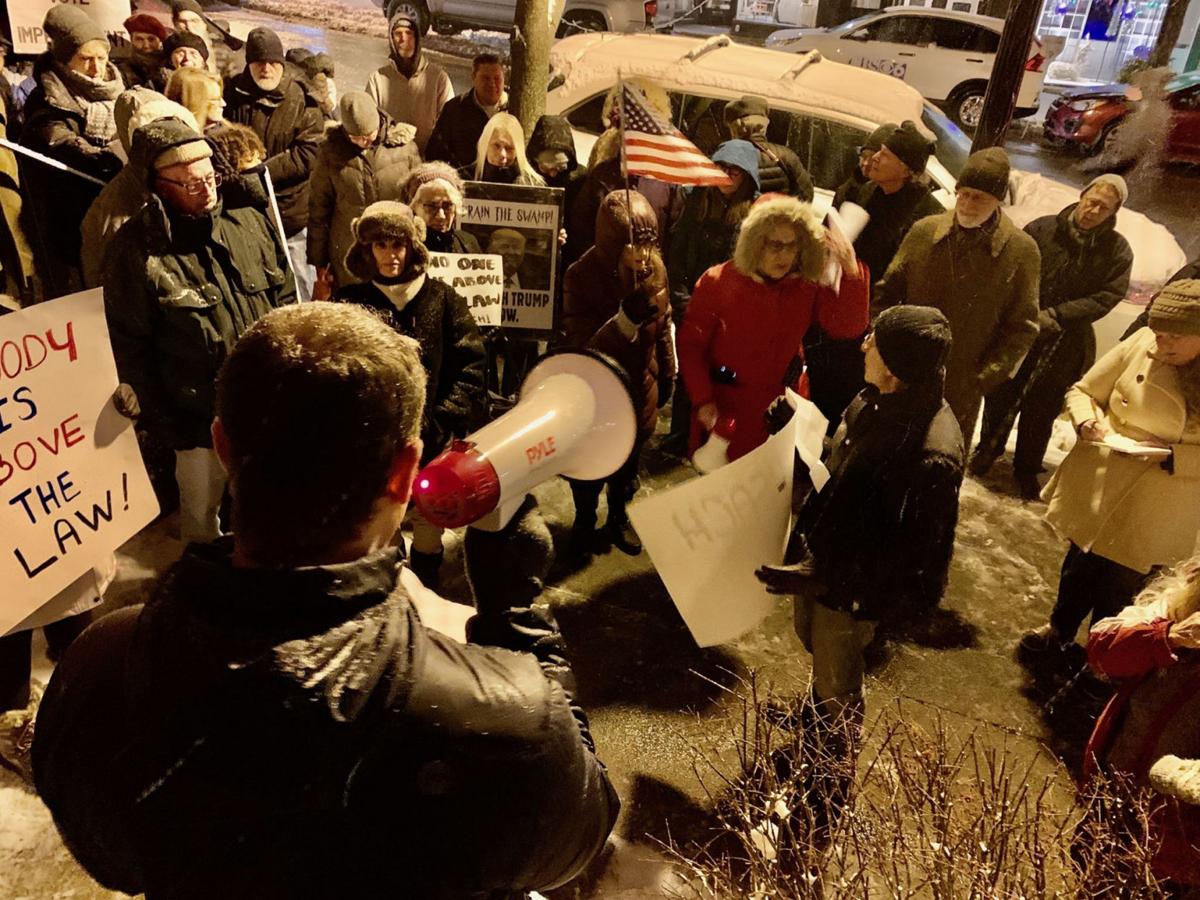 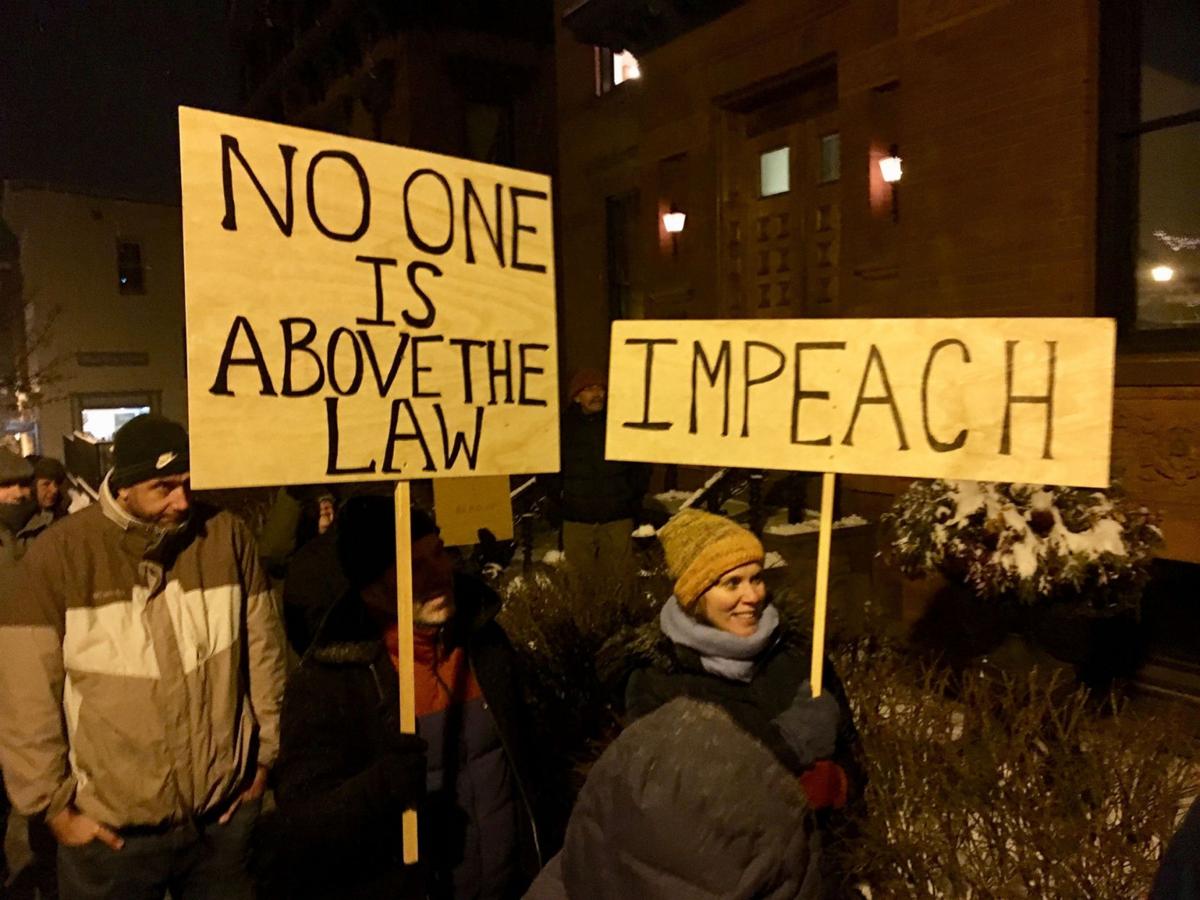 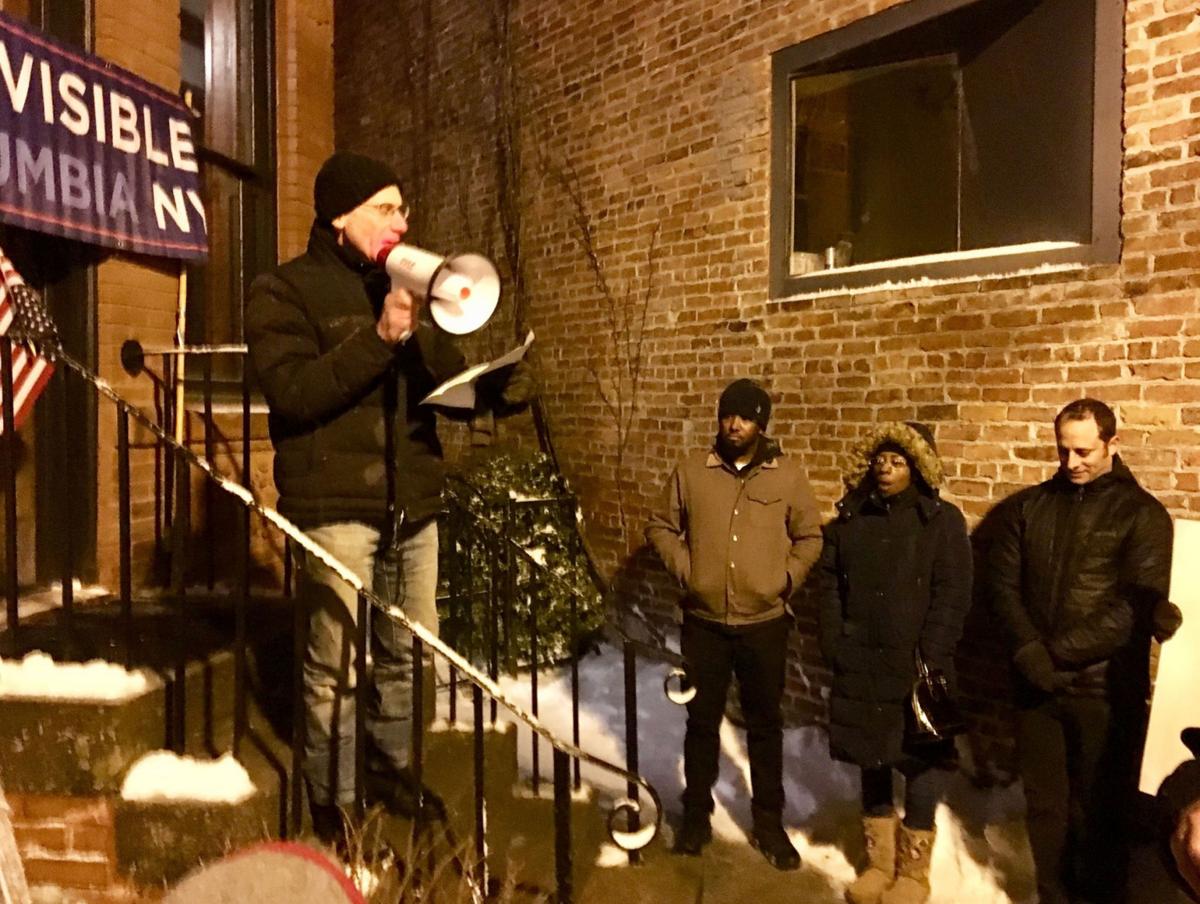 HUDSON — Joining more than 600 nationwide rallies on “Nobody is Above the Law,” Indivisible Columbia NY-19 showed support for impeachment of President Donald J. Trump in Hudson on Tuesday.

Although about 500 people signed up to attend the rally, about 50 attended the rally on a cold, messy late afternoon outside U.S. Rep. Antonio Delgado’s office at 420 Warren St., Hudson. Delgado, D-19, announced Sunday that he will vote in favor of the articles of impeachment against Trump on Wednesday.

The U.S. House of Representatives debated Wednesday on whether to move ahead with Trump’s impeachment proceedings. Republicans denounced Democrats as being politically motivated in their decision to pursue impeachment and denying basic facts.

“This is a great crowd on a cold, icy night,” rally organizer and Livingston Democrat Pam Kline said. “Nothing is more important than protecting our democracy. Democracy is a participatory sport.”

Chanting “Dump Trump” and “Impeach him” and “Stand up, fight back!” the rally was attended by Hudson Democrats, including Mayor-elect Kamal Johnson, mayoral aide designee Michael Chameides and 2nd Ward Alderwoman Tiffany Garriga.

Chameides told the crowd that they should show Delgado support for his vote to impeach Trump.

“I am really angered by the constant lying of President Trump,” Chameides said. “We see the racist and sexist comments. We see the rise in hate crimes and frequency of gun violence. His policies directly harm our lives and the lives of people around the country and around the world. It is traumatic and it needs to stop. We need to impeach Donald Trump.”

Invoking former President Barack Obama, Johnson called Trump a symptom, not a cause of the state of the country.

“Any symptom is any subjective evidence of a disease,” Johnson said. “That is what we’re seeing now...the disease of the presidency. The disease of leadership.”

Meanwhile, Republicans encouraged their party faithful to flood the phone lines of Delgado’s offices, urging him to vote against impeachment

At the end of the rally, protesters chanted, “This is what democracy looks like” as passing drivers honked their horns in their vehicles.

By all means IMPEACH Trump! Throw open the borders, watch the stock market tumble, forget about the rule of law, diminish our military and of course let other countries take advantage of us. Look around and be sure that everything you see including cloths on your back is made elsewhere where the countries care less about pollution, child labor and a host of other things. It seems to me the more education that people are exposed to the less common sense they have. He is draining the swamp and I would not be sure of that unless there was so much resistance to him. Trump 2020! from a smelly deplorable registered Democrat