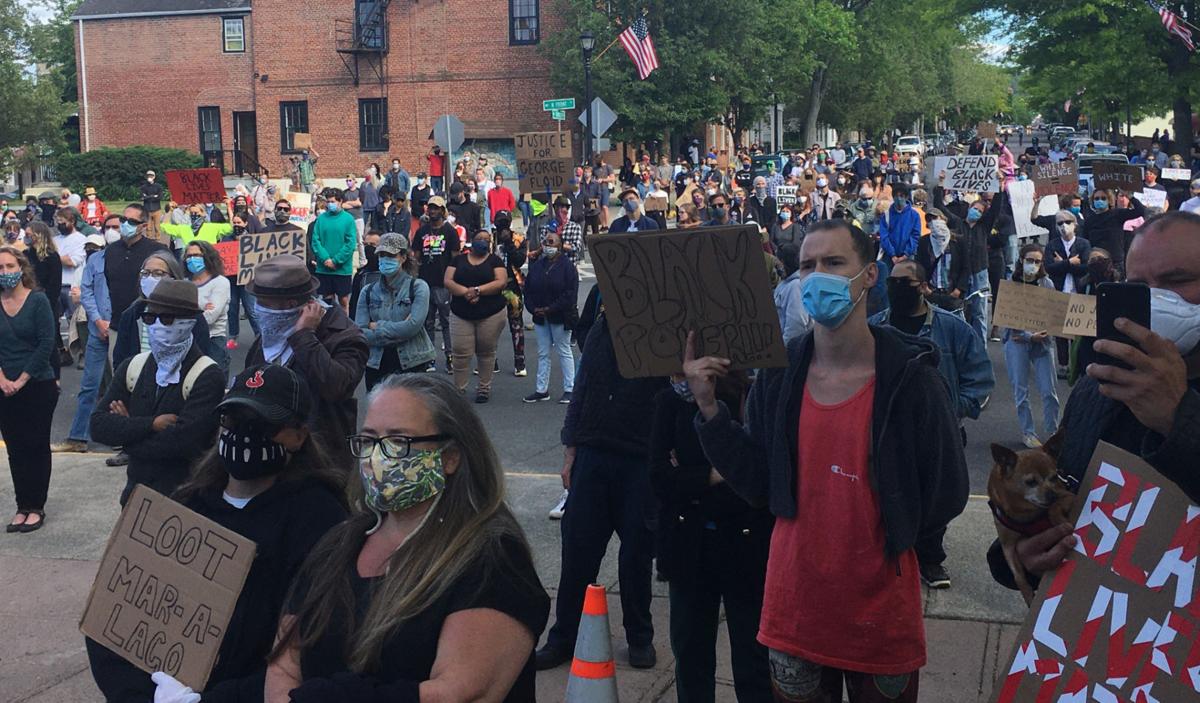 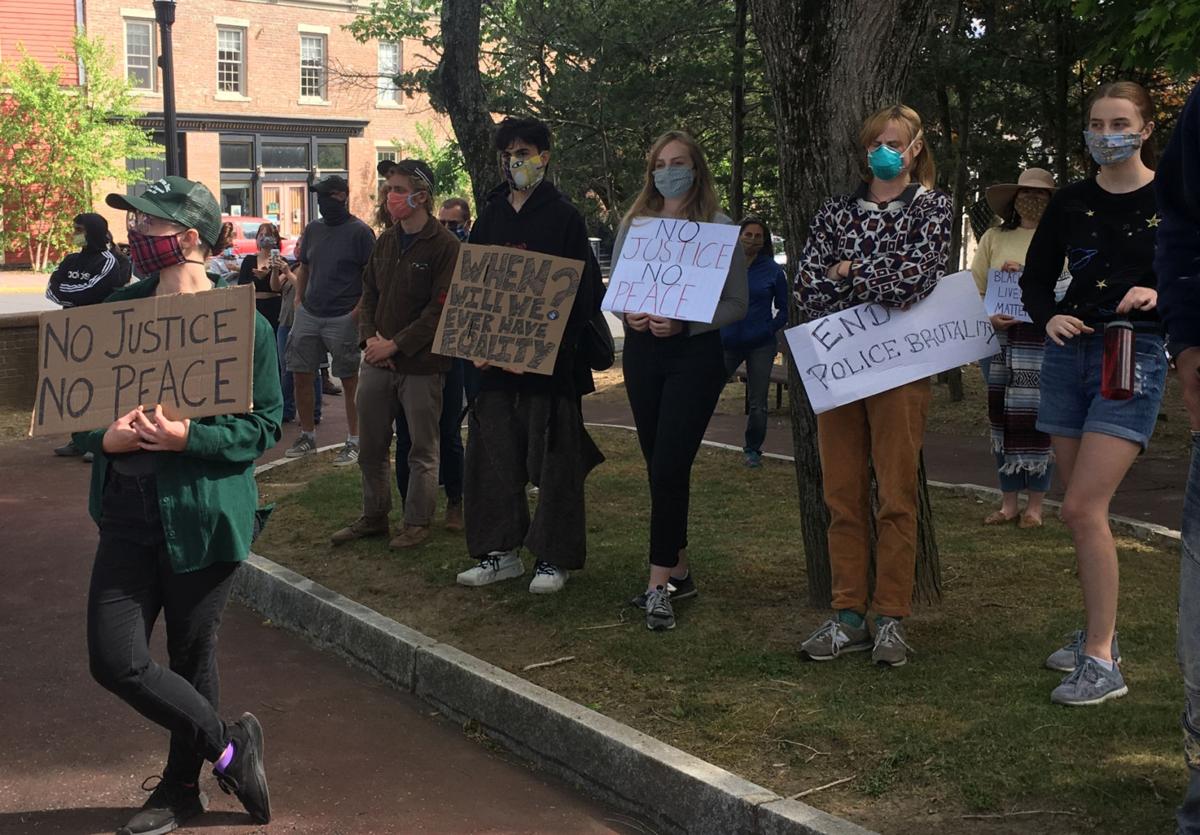 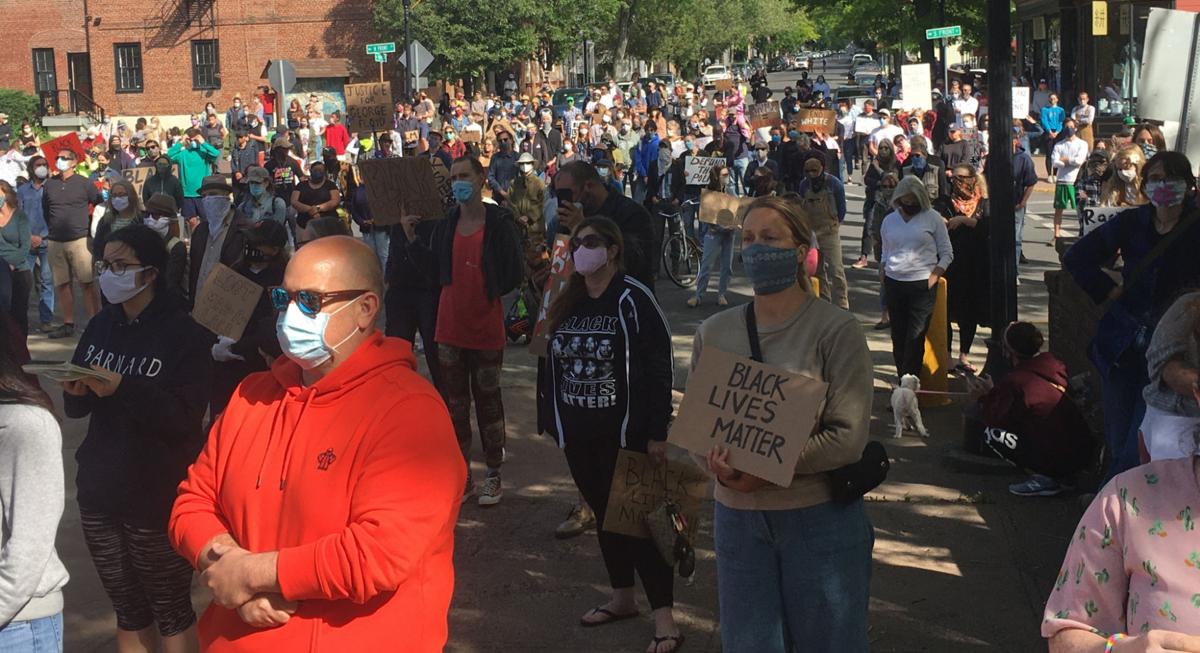 Melanie Lekocevic/Columbia-Greene Media Protesters spilled out into the street at Promenade Hill Park on Sunday to protest the death of George Floyd, of Minneapolis, as rallies were held nationwide over the weekend.

Melanie Lekocevic/Columbia-Greene Media Protesters spilled out into the street at Promenade Hill Park on Sunday to protest the death of George Floyd, of Minneapolis, as rallies were held nationwide over the weekend.

HUDSON — Hundreds turned out to Promenade Hill Park on Sunday afternoon to rally for justice in the wake of the death of George Floyd in Minneapolis.

Floyd, 46, who is African-American, died following a confrontation with police on Memorial Day, which was caught on video by a bystander. His death has sparked protests, demonstrations and riots nationwide.

“I just want everyone’s voices to be heard,” Hudson resident Bella Lugo said. “It’s really hard, what is going on. We need to stand up for people whose voices aren’t being heard. I want it to be a safe place for my nieces and nephews to be able to go outside and not be discriminated against because of the color of their skin.”

The demonstration, which was peaceful, was organized by Mayor Kamal Johnson to give voice to people angry over the events in Minneapolis.

“This is an event for solidarity, and to let the world know — there doesn’t have to be chaos, but we can be fed up and we can be angry,” Johnson said prior to the demonstration.

“We just want to make sure the community feels heard, and also that our police understand that this isn’t just about them, but it is about us being heard and us all doing a better job for our community,” he told the crowd.

“The violence needs to end,” Hudson resident Irene Porcaro said. “People need to be heard. There is inequality in society and we need balance.”

Julia Prem, of Hudson, held a sign urging white people to stand up to racism.

“It’s like the sign says — white silence equals violence,” Prem said. “I am here because my heart has been broken for most of my life and maybe it is time to have a new revolution.”

Several speakers addressed the crowd, which spilled outside the park and into the street.

Claire Cousin was one of the guest speakers.

“In recent times, I hear more often than not, when these tragedies occur — why do we have to choose a side? Or, this isn’t just a race thing. You are right — it’s a system thing, and some of us benefit from the system and some of us are hurt at the hands of the system,” Cousin said.

Cousin urged her fellow demonstrators to bring about change in society.

“We don’t have to lie down and take it, because we have the option to rise and show the rest of the nation what solidarity looks like,” Cousin said, adding that the Hudson Police Department is “not the worst,” but that there is “room for improvement.”

“Police officer is a noble profession, and when something like this happens, it tarnishes all the good work and it does it rather quickly,” Moore said.

Johnson and police officials pleaded with the community to voice their concerns at the demonstration and not participate in community disturbances such as riots or looting.

“So many people are wondering, why have fires and why loot? What is it going to change?” said Dezjuan Smith from the youth organization Kite’s Nest. “The way I see it is, for decades, black people and people of color have been asking and pleading for change. But now, after being left speechless by a horrific video that we all saw, I think now we can’t simply speak, we need to do. The best way to really make an impact is to show people that we matter, that everybody matters, and I feel like it is not just a race thing — it is a class thing. It is an oppression thing.”

Kenold Dorce, also from Kite’s Nest, wants people of color to have the rights they deserve.

“We shouldn’t have to fight for our rights. We should already have them,” he said. “And I think it is unfair that we have to do all this work and protest, and we all have to become activists because of this. But we need people to understand that we are the future and we have the capability to make a change.”

Salma Ibrahim asked to address the crowd as well, and said too many injustices have been committed.

“This country was built on the backs of slavery and genocide, and the victims have barely gotten an apology,” Ibrahim said. “It is 2020, and every other day we hear of a new person who is killed, and it sickens me.”

Hudson Police Commissioner Peter Volkmann likened the social justice issues to the coronavirus, noting that everyone in the crowd wore masks to protect each other, and that something similar has to happen to bring about change.

“We are looking at a problem in the criminal-justice system and in our society. You can’t see it, you can’t touch it, you can’t smell it, but you can feel it,” Volkmann said. “And we all feel what is going on today from a tragedy. It is really important that we come together, like we did with this virus.”

He pleaded for the Hudson community and the local police force to come together to have a “hard conversation right now” about how things can and should change.

Get the stories of the wrongfully convicted in Columbia County that served time and have tarnished records from the corruption in the justice system. Forcing false admissions by keeping these victims under extreme duress, out of fear of more charges that will be made up, forced with threats, and also making them sit withdrawing from heroin and other opiates with no water or any relief asking over and over for medical attention and being denied till you tell them what they want to hear for there case even though it's not true just to get help and relief from the torture of being dope sick willing to say or do anything cuzing them to lose years of their lives. All this happens in Columbia County. It's not as serious as a death from abuse of power but it is still unjust.

Police have no legal retirement to tell the truth to you. They can lie to you to get you to tell them the things they want to hear. EVERYTHING you say can and will be used against you. And they will stretch and reframe whatever you say to get the convictions they want.

After all, they have new jail buildings to fill.

I think it's time for a Columbia County Cop Watch. I want to know which cops have complaints about them, and that those complaints are.

5 steps companies might consider before reopening their office spaces