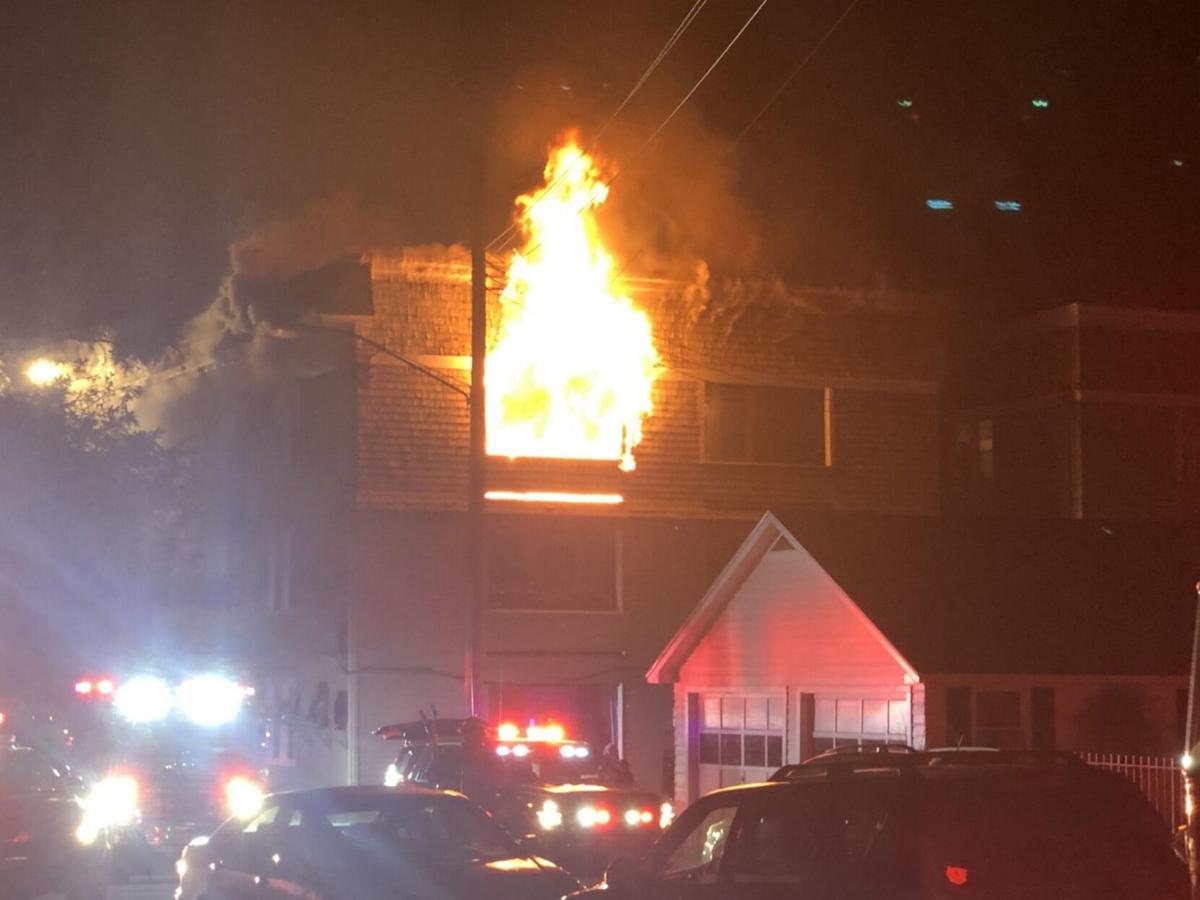 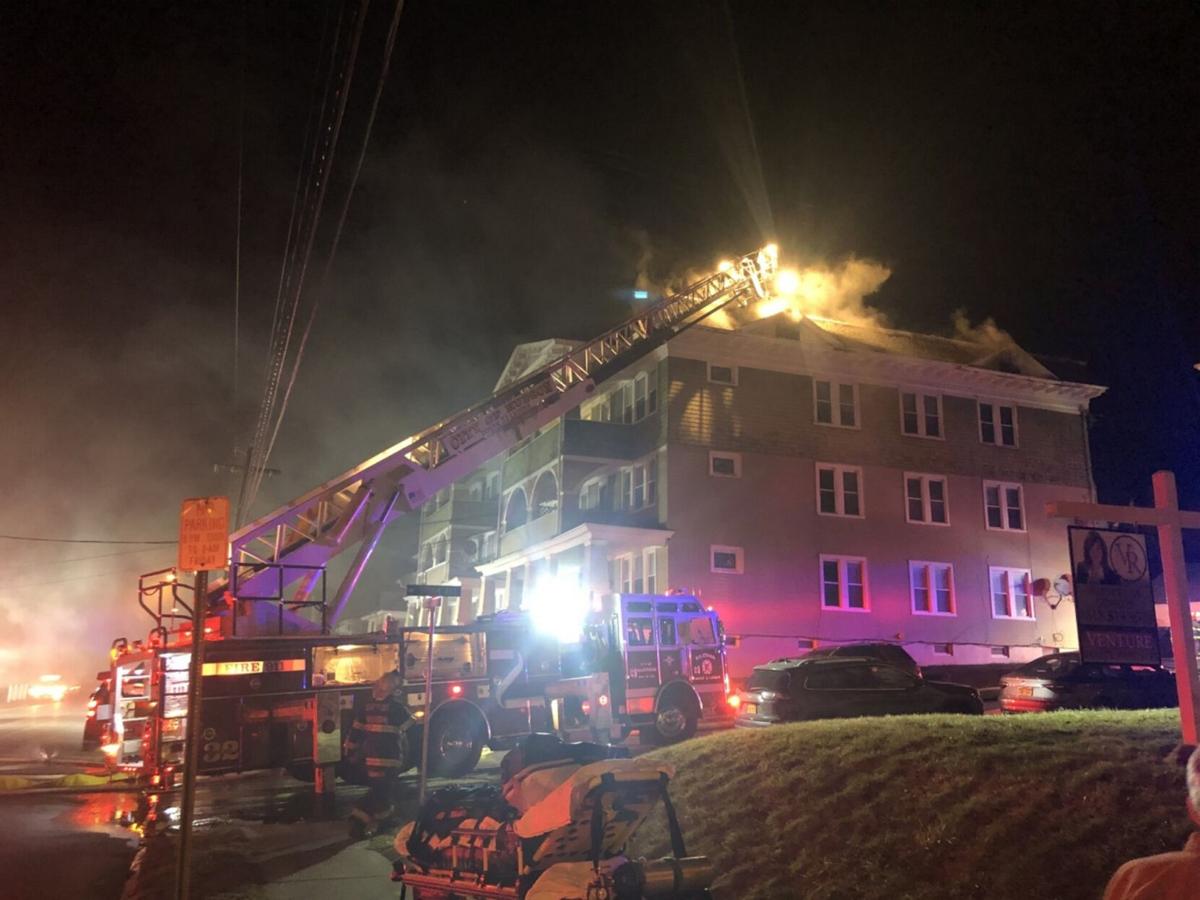 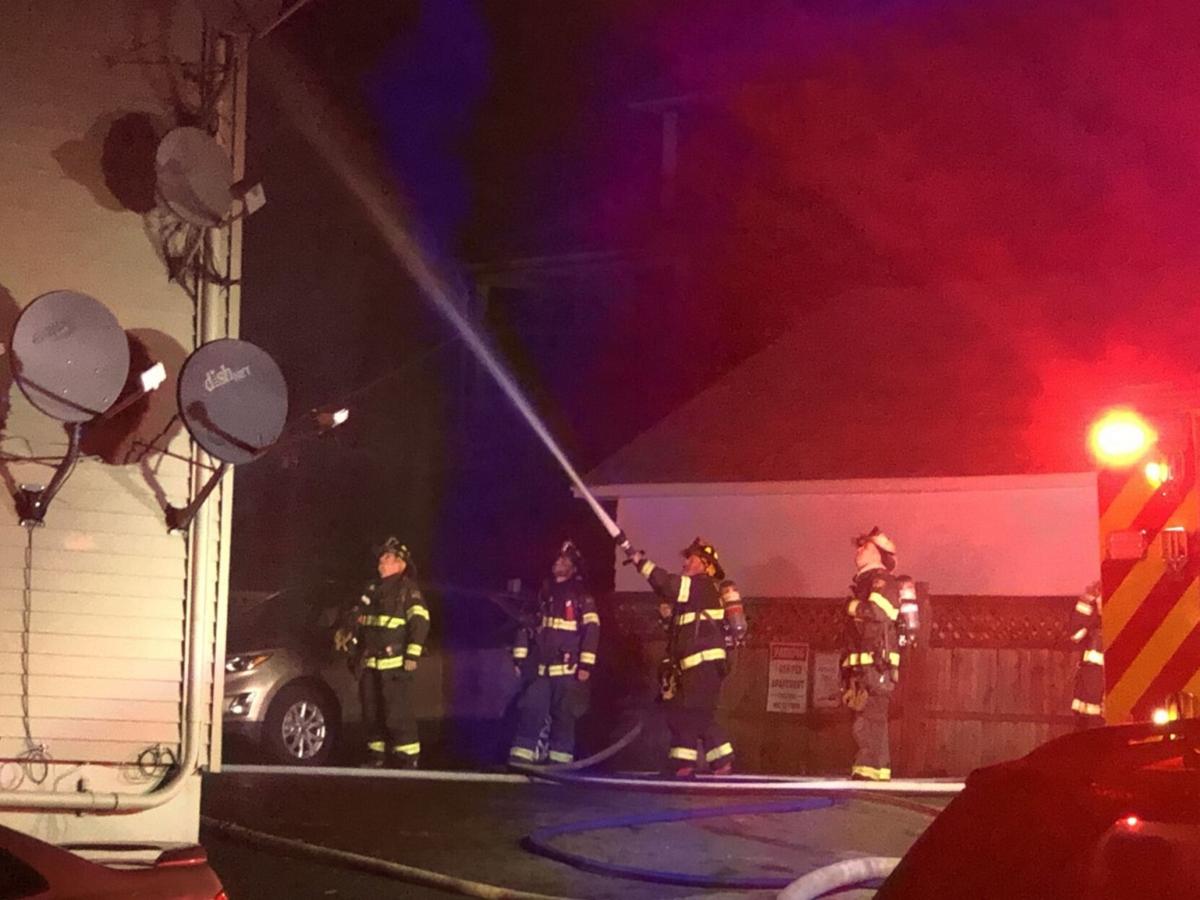 Firefighters pour water on the rear of a Hudson apartment building to extinguish the fire. Bill Williams/Columbia-Greene Media 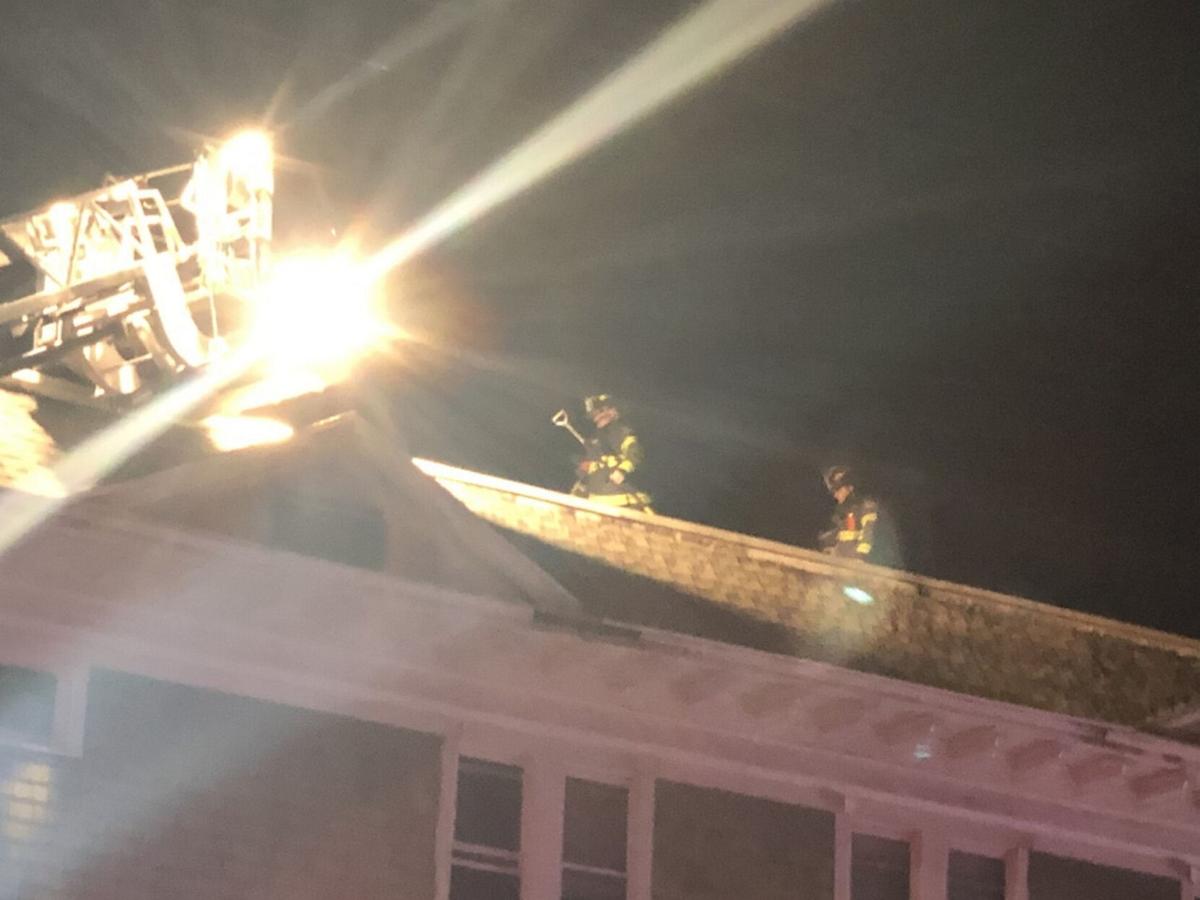 Firefighters cut through the roof of a Hudson apartment building to access the fire in the attic. Bill Williams/Columbia-Greene Media 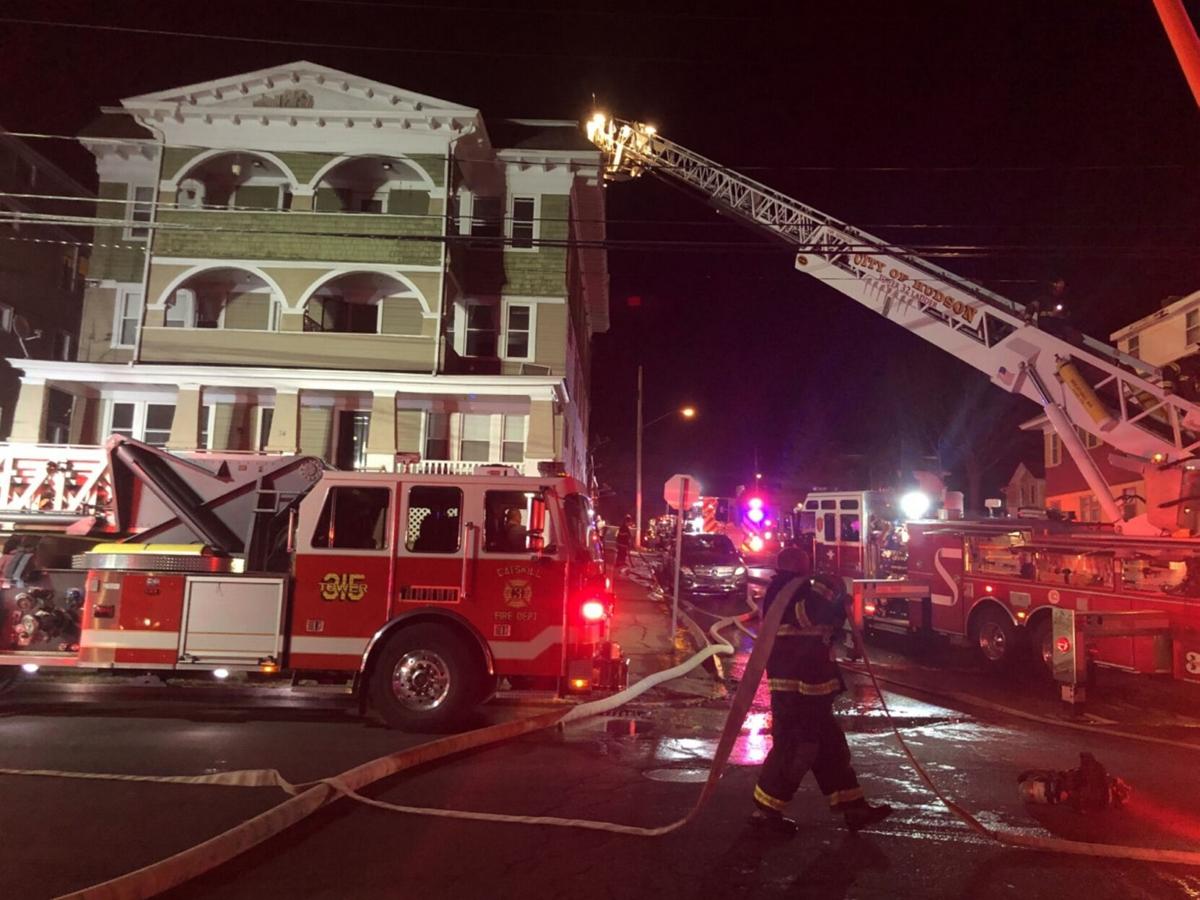 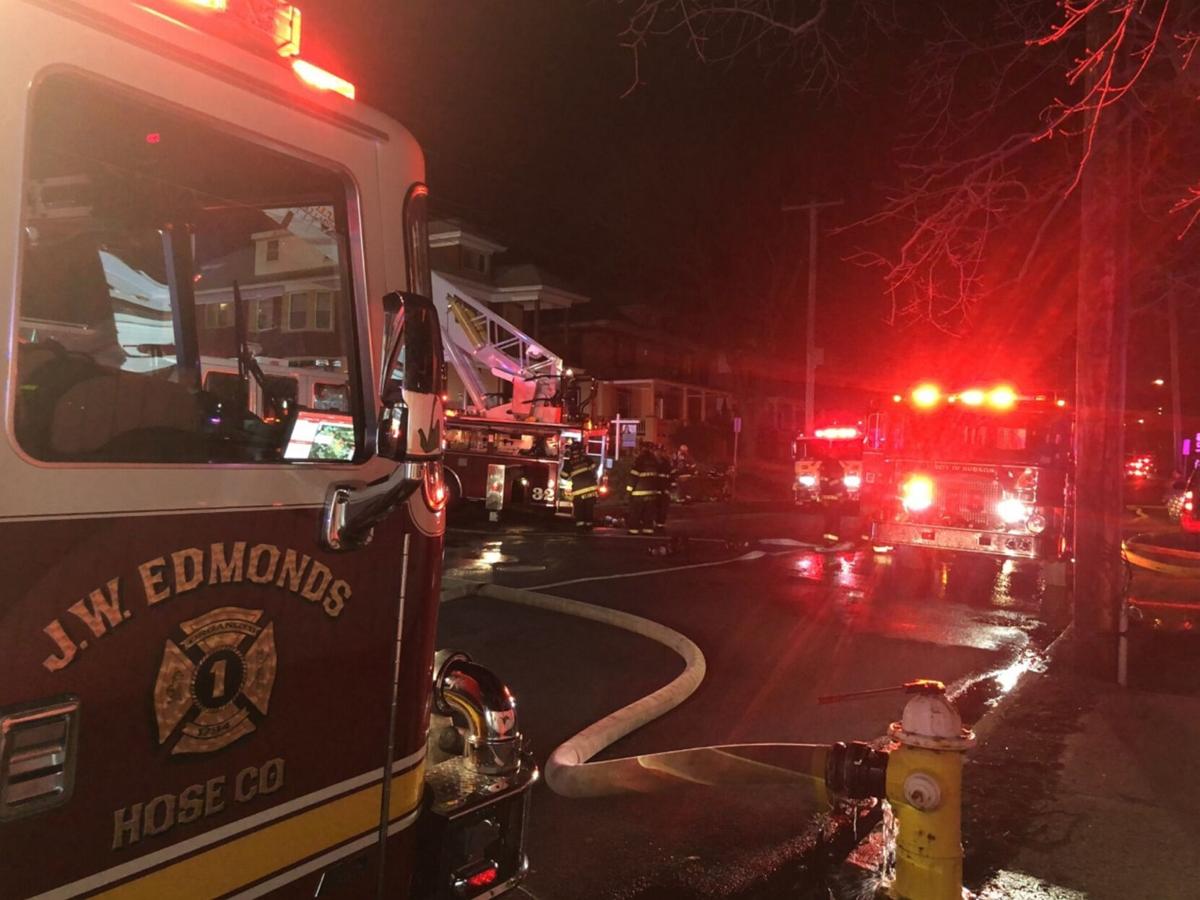 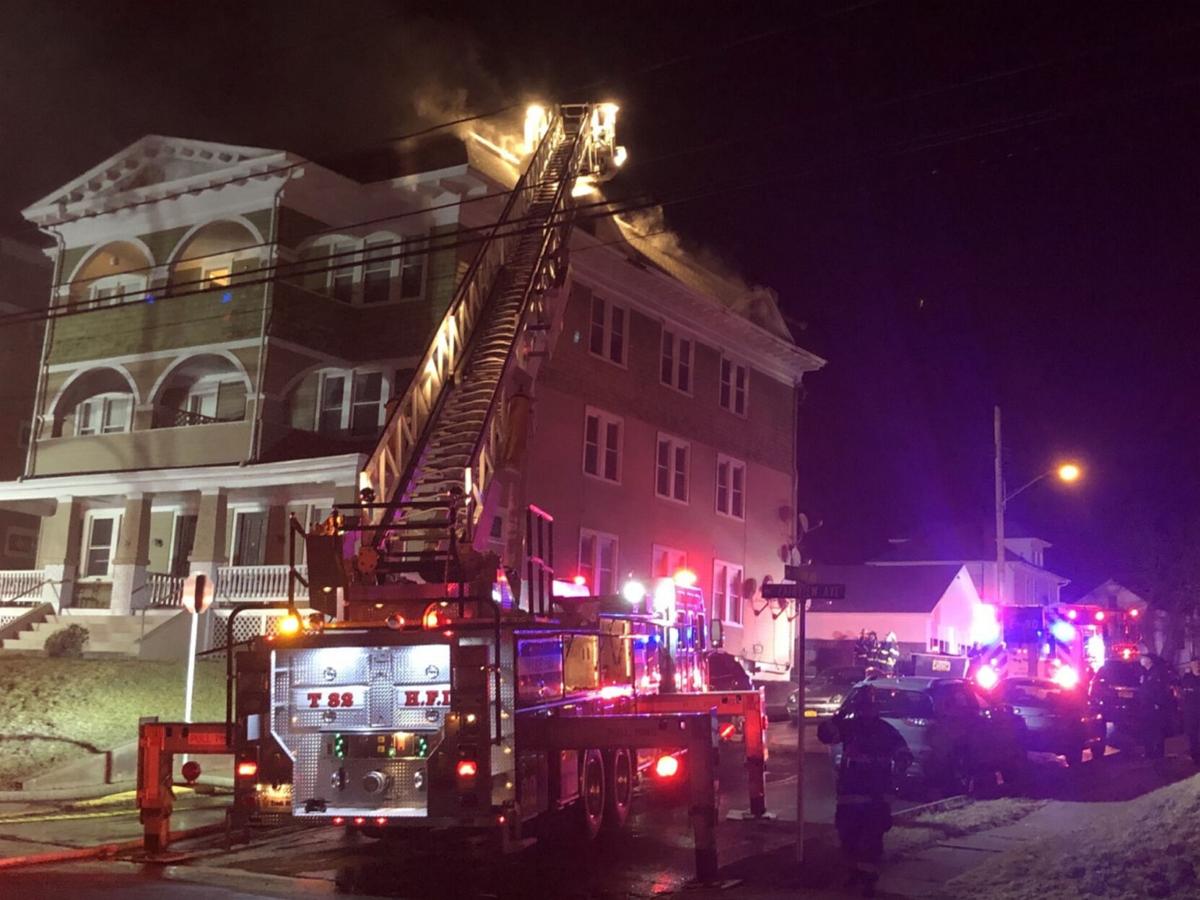 It was a busy night for firefighters after fire broke out at a Hudson apartment building Wednesday morning. Bill Williams/Columbia-Greene Media 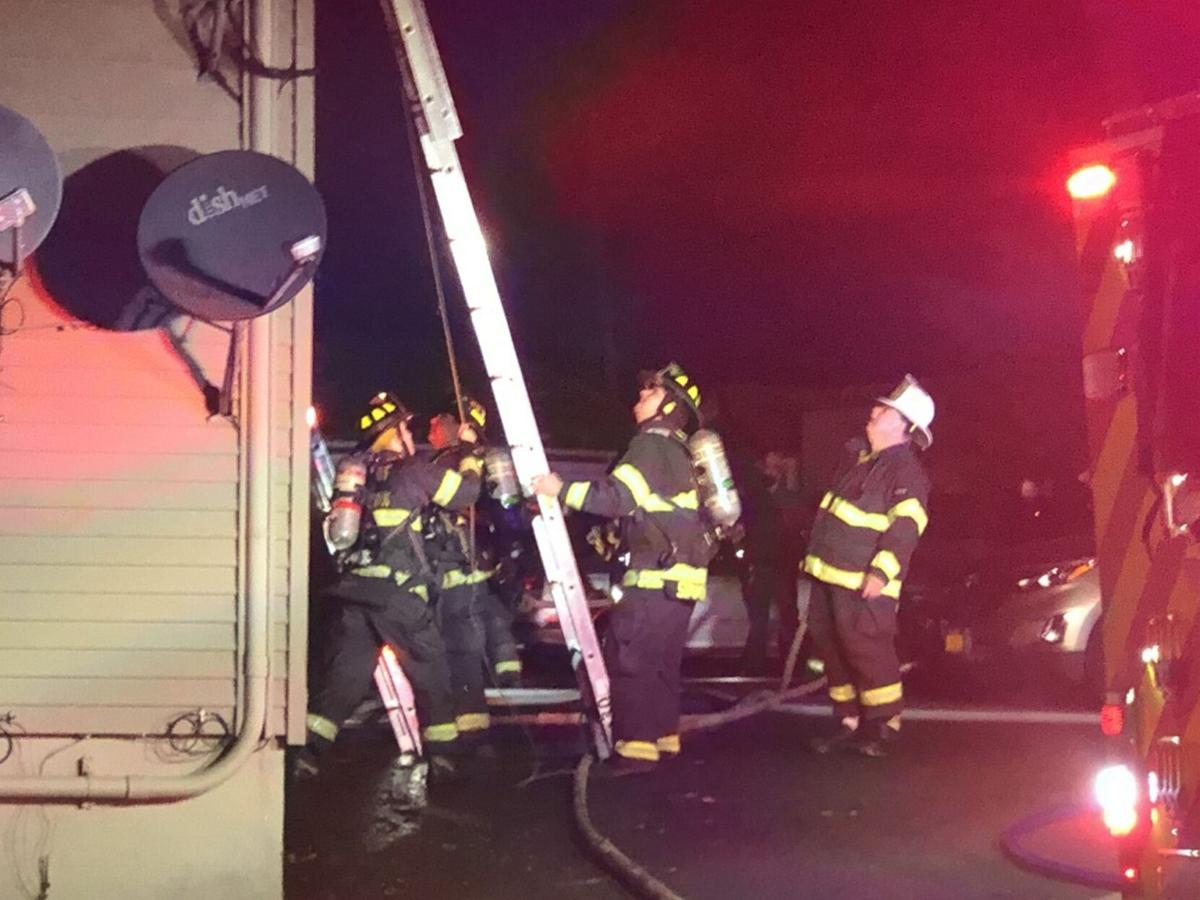 Firefighters pour water on the rear of a Hudson apartment building to extinguish the fire. Bill Williams/Columbia-Greene Media

Firefighters cut through the roof of a Hudson apartment building to access the fire in the attic. Bill Williams/Columbia-Greene Media

It was a busy night for firefighters after fire broke out at a Hudson apartment building Wednesday morning. Bill Williams/Columbia-Greene Media

The families were either assisted by the Red Cross or are staying with relatives, Demarco said Wednesday.

Flames were seen coming from the roof and third floor as firefighters arrived at 34 Fairview Ave.

Hudson Fire Department responded to the scene at about 1:15 a.m. for a reported fire in a wall inside apartment No. 4. By the time the first truck arrived on the scene, the fire began to spread into the building and attic area.

A balcony on the third floor was engulfed in flames when firefighters arrived.

Volunteers went to work inside and outside the structure. Firefighters cut holes in the roof to release heat and smoke and to enable them to get better access to the fire in the attic.

Everyone was able to get out of the building safely. Two searches of the six apartments were conducted by firefighters. No one was found inside.

Tenants and neighbors gathered along Fairview and Storm avenues and watched firefighters work.

Both apartments on the third floor and part of the attic sustained extensive damage. There was smoke and water damage throughout the building, Demarco said.

National Grid responded to the scene to disconnect power.

The Hudson code enforcement officer was requested to the scene.

Officials reported the fire was out at 1:55 a.m., and then began checking the rest of the building to make sure it had not spread any farther.

The cause of the fire has been ruled accidental, Demarco said. It is believed to have started on the third floor balcony due to careless smoking, Demarco said.

Assisting Hudson firefighters at the fire scene were companies from Greenport, Catskill and Claverack.

Fire companies on stand-by at the Hudson Central Fire Station included Germantown, Stottville, Athens, Chatham and Stuyvesant. While those companies were on standby, they responded to the Fireman’s Home on Harry Howard Avenue, after staff at the facility smelled smoke and thought there was an electrical fire.

It turned out that smoke from the Fairview Avenue blaze had drifted to the Fireman’s Home and that was what the staff smelled, Demarco said.

Clermont firefighters stood by at the Germantown firehouse.

All fire companies were back in service at 3:27 a.m.