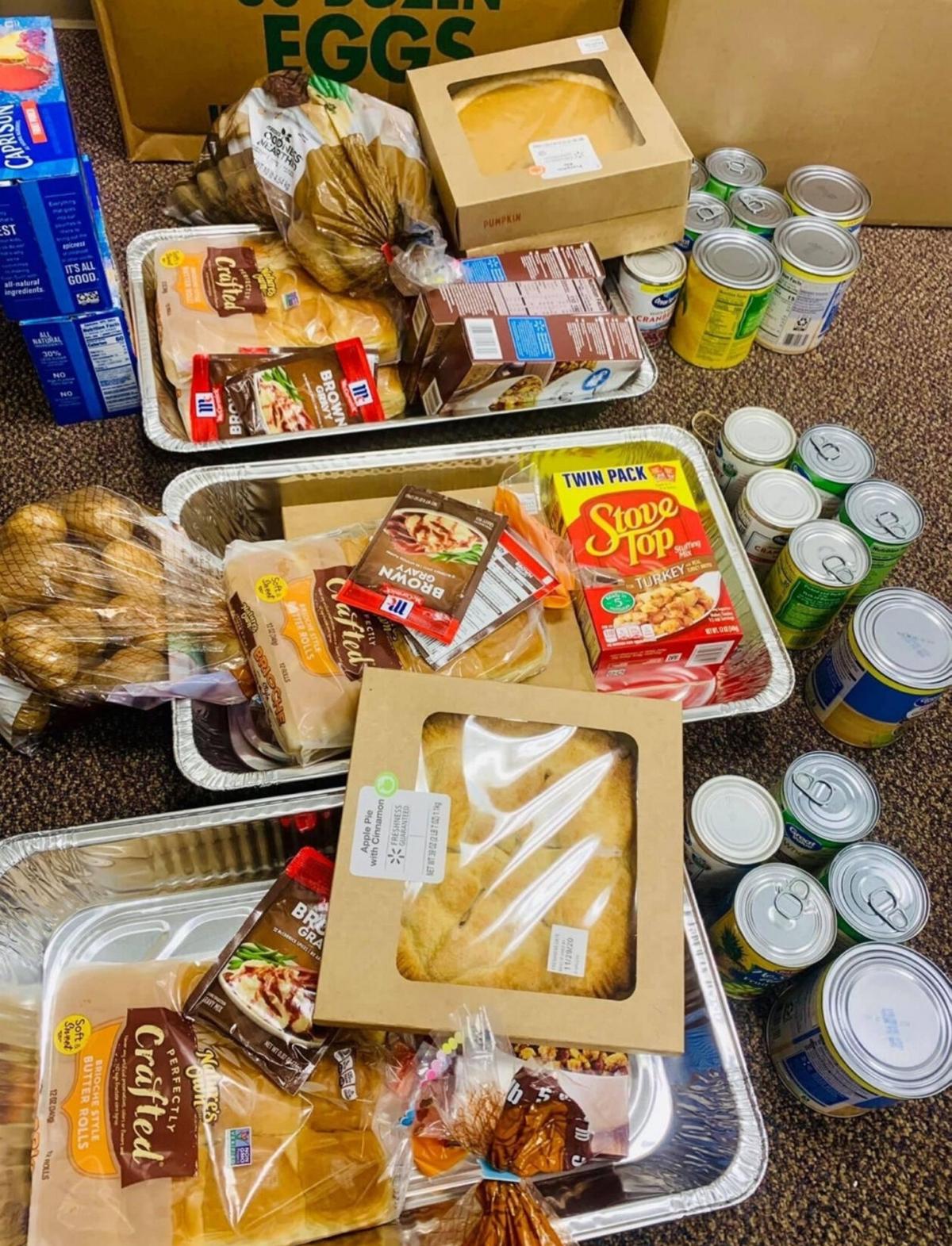 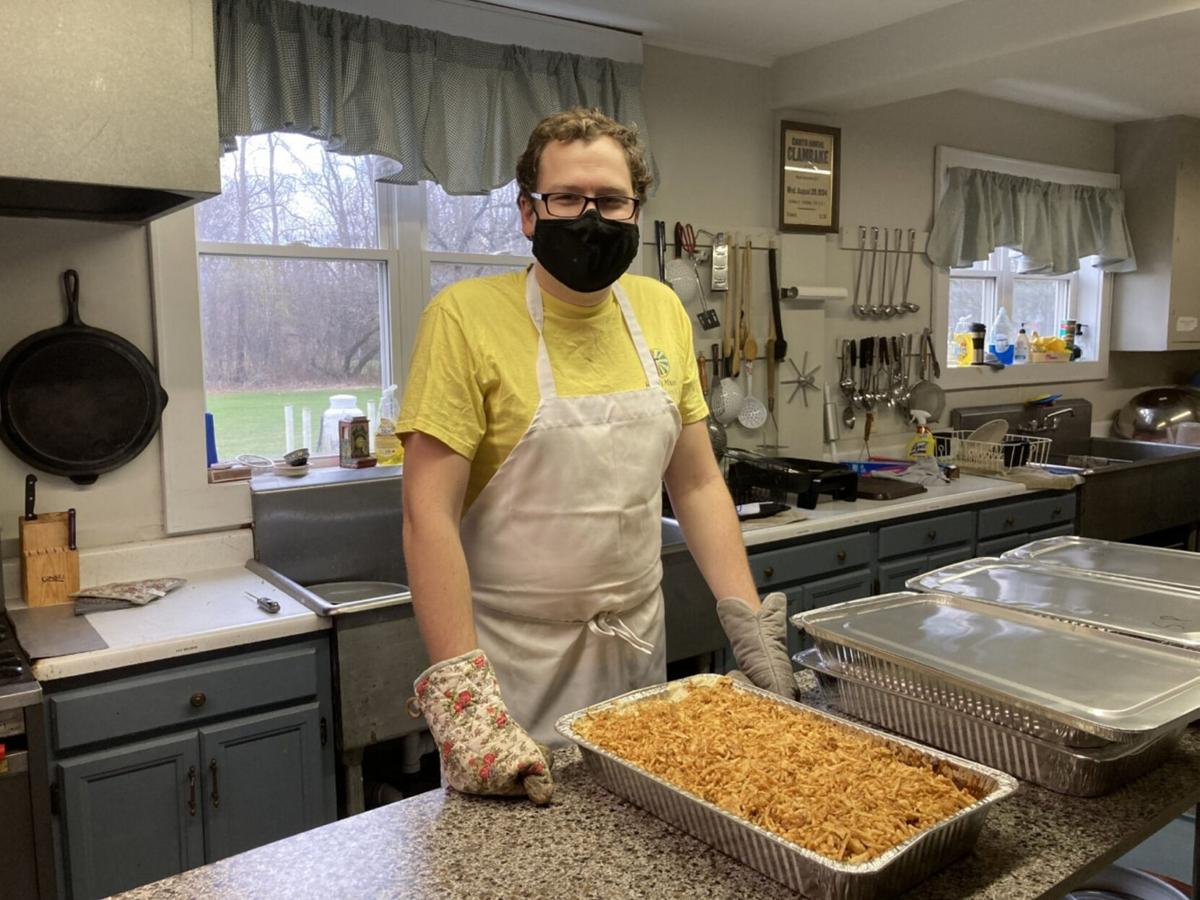 Natasha Vaughn/Columbia-Greene MediaEric Bachner, a volunteer with Hope’s Mission of Coxsackie, with a green bean casserole he helped prepare.

Natasha Vaughn/Columbia-Greene MediaEric Bachner, a volunteer with Hope’s Mission of Coxsackie, with a green bean casserole he helped prepare.

Thanksgiving for many looks different in the middle of a global pandemic, but in the Twin Counties some groups found new ways to provide holiday meals to those in need.

Since large sit-down dinners with dozens of people in one place is not possible in the year of COVID, charitable organizations turned to pick-up and delivery services for safety.

All week, volunteers worked together to cook, bake and prepare everything for the Thanksgiving meals at the First Reformed Church in Coxsackie. In all, around 20 hours of cooking went into making 300 holiday meals this year.

The annual event has been happening every Thanksgiving for about the past 35 years, said Rick Palmer, who along with his wife Donna Palmer took over the program in 2000. Hope’s Mission of Coxsackie has been helping with the Thanksgiving event since 2008.

Each year, the number of Thanksgiving meals they have prepared has grown, Hope’s Mission President Evelyn Russo said Wednesday.

“It’s seeing the looks on people’s faces when you brought them a meal and how appreciative they are and sometimes getting a phone call from them, they are just so thankful that somebody is out there doing this for them to help them out.” Russo said.

This year, due to the COVID-19 pandemic, 10 volunteers are allowed at one time. In previous years, Russo said, they have had up to 30 or 40 people working on the dinners. Students and members of other church organizations have also answered the call to volunteer.

On Thanksgiving, cars will line up in the church parking lot and the cooked holiday meals will be loaded with addresses so they can be delivered, Russo said. Some people will come directly to the church to pick up their holiday meal.

Since partnering with Hope’s Mission the program has been able to grow and have more resources available to help members of the community, Rick Palmer said.

“That’s why we do it, for those moments each year,” he said. “Now that we have Hope’s Mission, that’s an opportunity, if somebody says I don’t have silverware that’s our opportunity to say talk to us, what’s your circumstance, how can we help.”

In Columbia County, Michael Weaver runs the Hudson New York Public Community Board Facebook page. A little over a week ago, a friend of Weaver’s reached out to him and said he would like to provide two Thanksgiving meals to families who might not have otherwise had one this holiday. Weaver posted on the Community Board asking if there was anyone in need who was interested.

Weaver said the original donor decided to sponsor three families for this year’s holiday dinner. This left six other families who had requested help on the original community board post.

Not wanting those families to go without, Weaver reached out to people in the community who he says are always willing to help others.

“Through my generous donors we have been able to honor everybody’s request who did reach out,” Weaver said. “We actually reached out to some other people who we knew were in need and we were able to provide them with meals.”

He and others who volunteered to help used the monetary donations to go to stores and purchase everything the family needs to be able to make a Thanksgiving meal, including the aluminum roasting pan for cooking the turkey.

The food boxes were delivered to the houses of those who were receiving them. As of Wednesday night, Community Board volunteers provided 28 families with Thanksgiving meals.

They provided meals for families with three people as well as larger families including one with 13 people, Weaver said. They were able to help families from all different walks of life.

Community Board volunteers provided meals to families in Columbia County and Greene County.

“It all came together with an idea from a buddy, and from there a lot of community members and businesses reached out and made a donation to help these people. It’s just been one act that has triggered a few to follow,” Weaver said. “We just wanted to make sure everybody could have a decent holiday and not have to stress so much on Thanksgiving, and they get to enjoy the day with their families.”

The experience has him and others in his group looking at the potential of helping community members at Christmas as well, Weaver said.