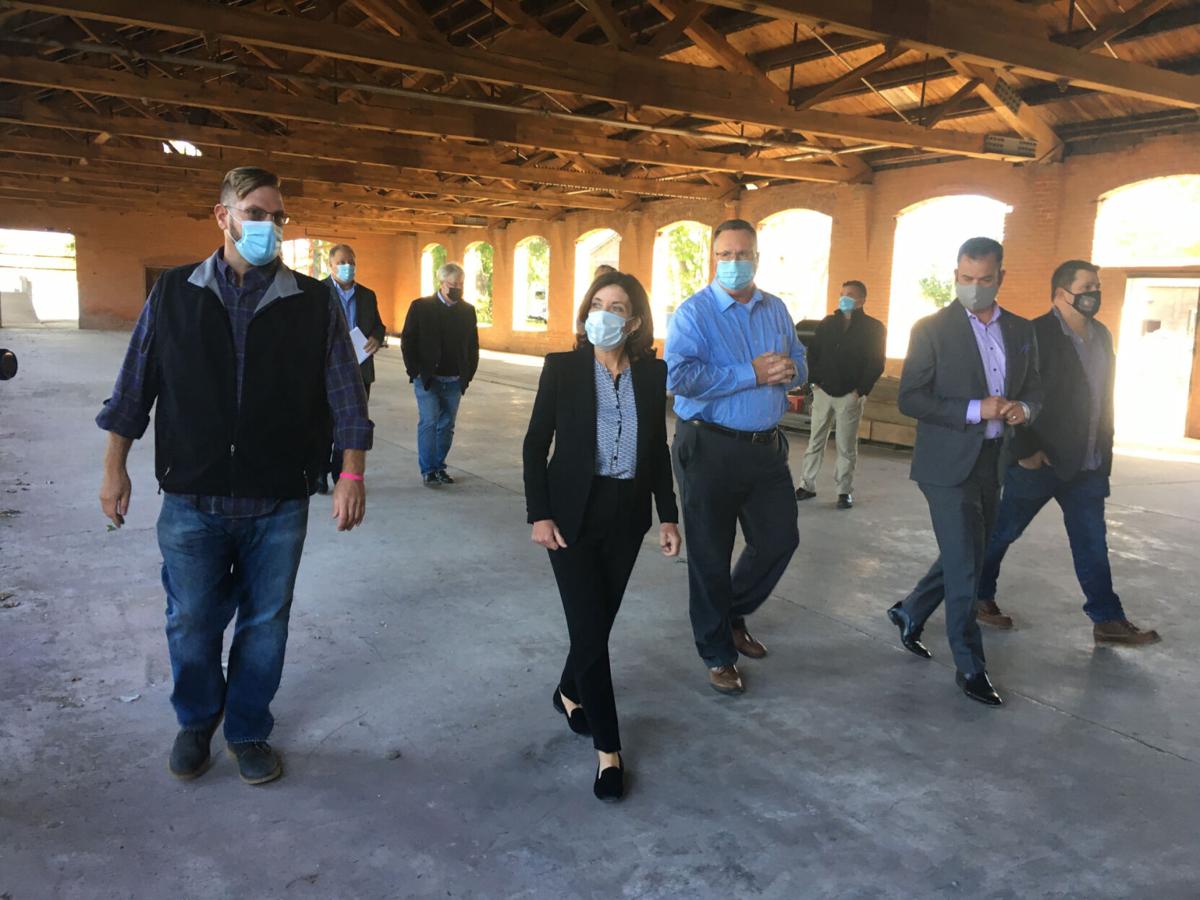 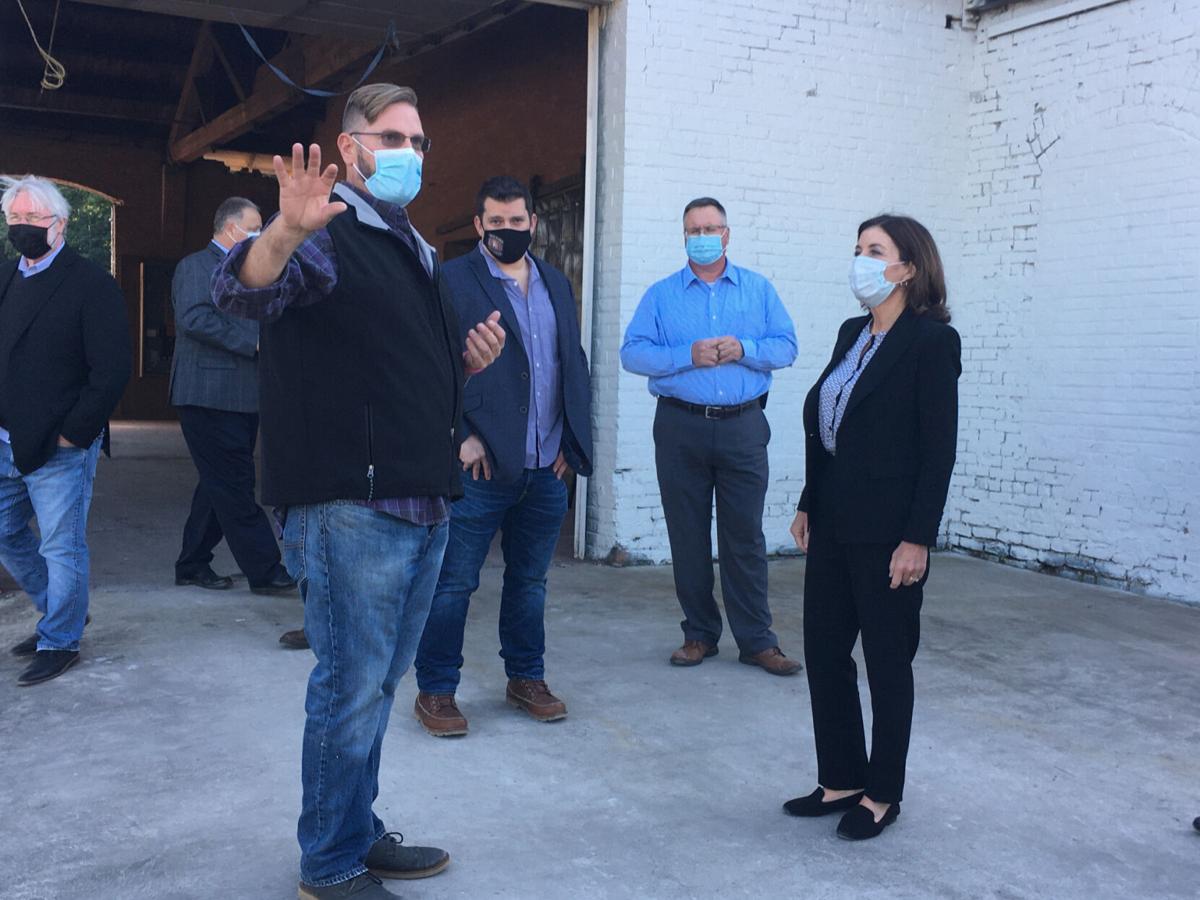 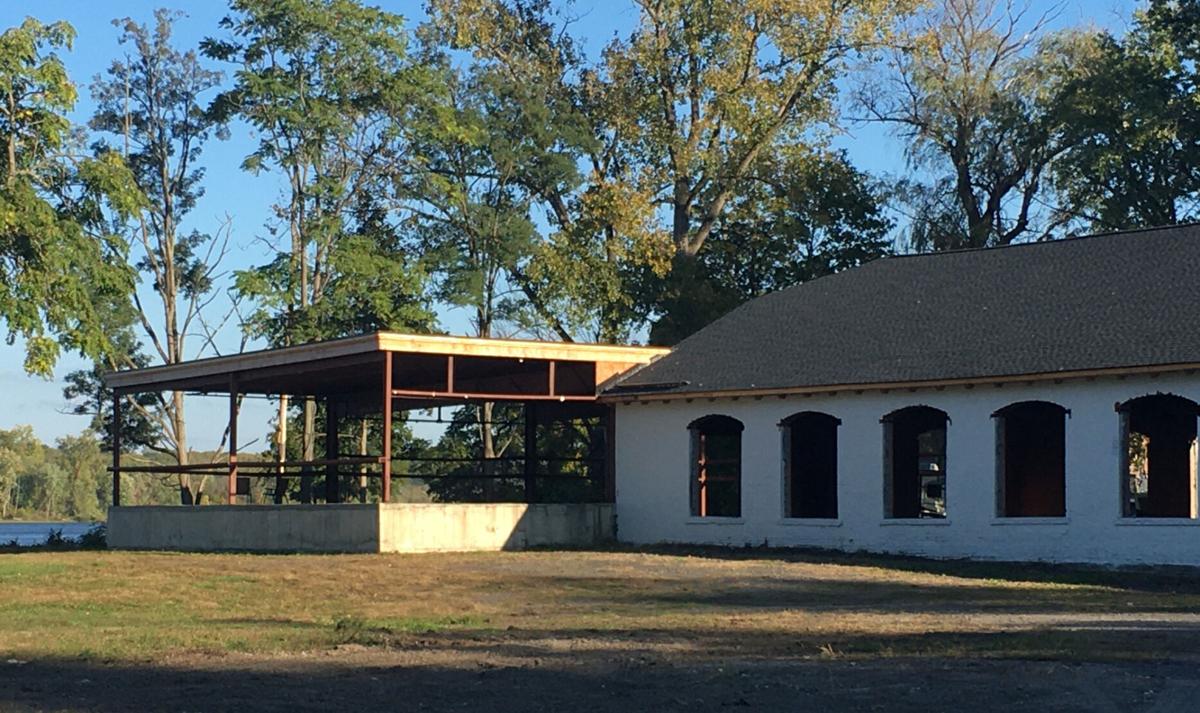 A former iron foundry is being transformed into The Wire, a wedding and event center, in downtown Coxsackie. Melanie Lekocevic/Columbia-Greene Media

A former iron foundry is being transformed into The Wire, a wedding and event center, in downtown Coxsackie. Melanie Lekocevic/Columbia-Greene Media

“I see a lot of projects around the state and I can tell you right now, this is spectacular,” Hochul said of the South River Street Development project in downtown Coxsackie.

Local developer Aaron Flach received a $2 million grant from Empire State Development for The Wire wedding and event center and the Newbury Hotel, which are Phase 1 of the multi-phase project.

“I believe in this project,” Flach said. “I was born and raised in this community and I have always loved it here.”

“This is going to transform this area and this community,” Hochul said after taking a walking tour of The Wire. “It’s a good investment on the part of the state.”

The project is expected to drive economic development in the area and has the potential to be “transformative,” Hochul said.

“The potential here is incredible — to take a building that was abandoned and an eyesore, and no one saw the potential in, and now to have people who are using their own equity, their own business smarts, bringing together a team of people to transform this into a world-class destination,” Hochul said.

In addition to the grant, the project received tax incentives from the Greene County Industrial Development Agency, including a sales and use tax exemption, mortgage tax exemption, and Payment in Lieu of Taxes, or PILOT, IDA Executive Director Rene Van Schaack said.

“Anytime we can take an old, underutilized building back and make it a destination type of facility, it will draw people into the county,” Van Schaack said. “They will spend money and buy services, and they help our economy.”

Wedding event facilities in particular can spur local economies, driving business to other local companies like bakeries, florists, restaurants, caterers and the like, Van Schaack said.

The prospective event center and hotel once housed an iron foundry that produced machine parts for use in World War I. Several property owners have taken over the site since that time, but it has been vacant for decades.

“For years, people have hoped that someone from the city would come up with the money and buy it and develop it,” Coxsackie Mayor Mark Evans said Wednesday. “I think we have a golden opportunity because we have someone who is local and has done countless worthy projects that retain the historical aspects of the buildings. Aaron [Flach] knows how to do that.”

The Wire, the wedding and event facility, is named after State Wire and Cable, which was once housed there. The Newbury hotel is named after James Newbury, the building’s original owner back when it was a machine shop in 1903, Flach said.

Construction on The Wire has already begun, with a new roof installed. The building will next be enclosed and interior work will continue over the winter. The facility is expected to open June 2021, along with the new restaurant that will be housed at the former Patrick Henry’s Tavern.

The Newbury Hotel requires more intense rehabilitation work, with steel reinforcements added to the existing brick building and then four additional stories will be built above it.

“We are going to take the roof off this building and basically build four stories on top of this building,” Flach said. “It’s going to be 50 feet tall with a rooftop bar and 40 nice hotel rooms, with valet parking.”

“It’s pretty impressive,” Rausch said of the project. “I wish my dad was alive to see it.”

Good luck with this leap of faith. Developers often get a bad rap and have to endure sniping from every conceivable “stake holder.” Uninformed interlopers drive up the cost of projects, causing expensive delays and wild goose chases. Indeed it’s important to protect the environment and respect history but random resistance is too often the norm. Now, the ridiculous jail should indeed he resisted—even now. But this historic rehab makes enormous sense.