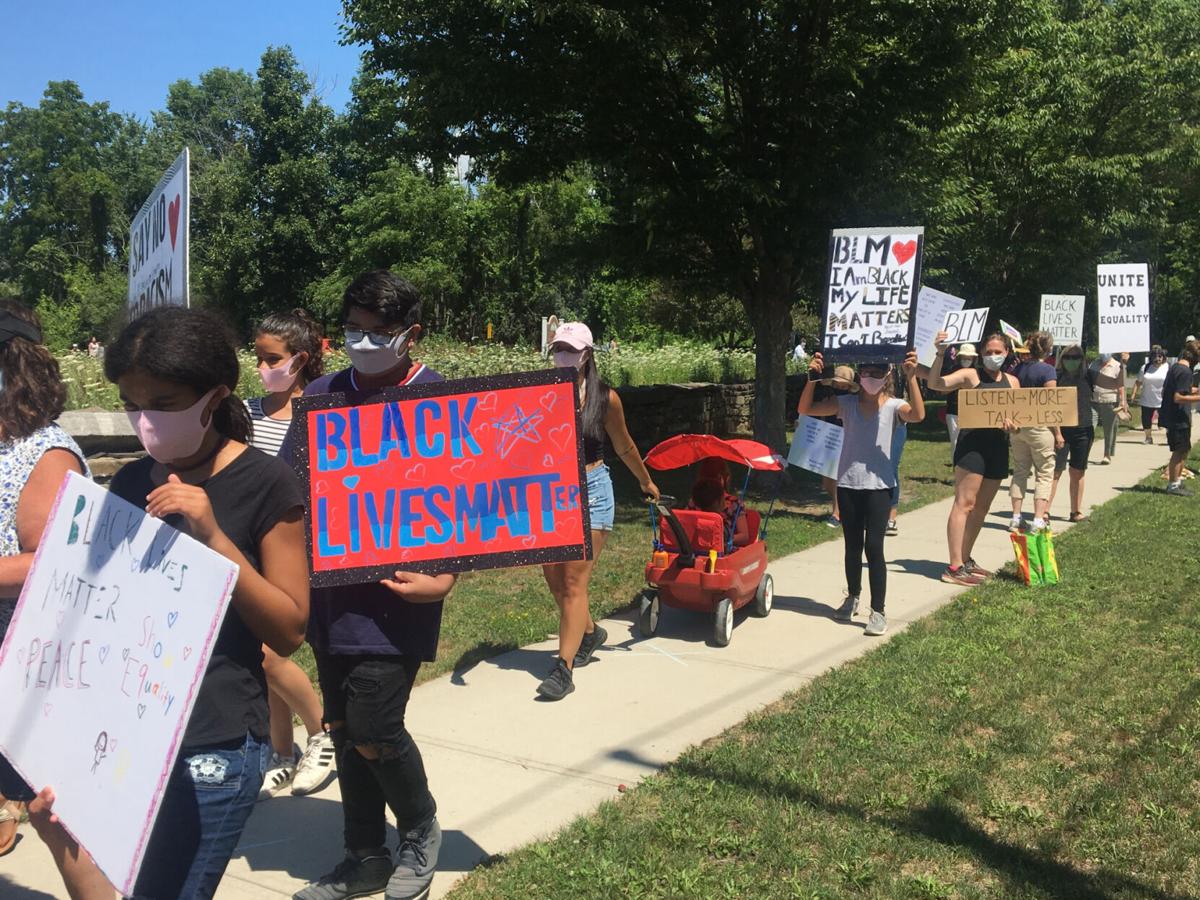 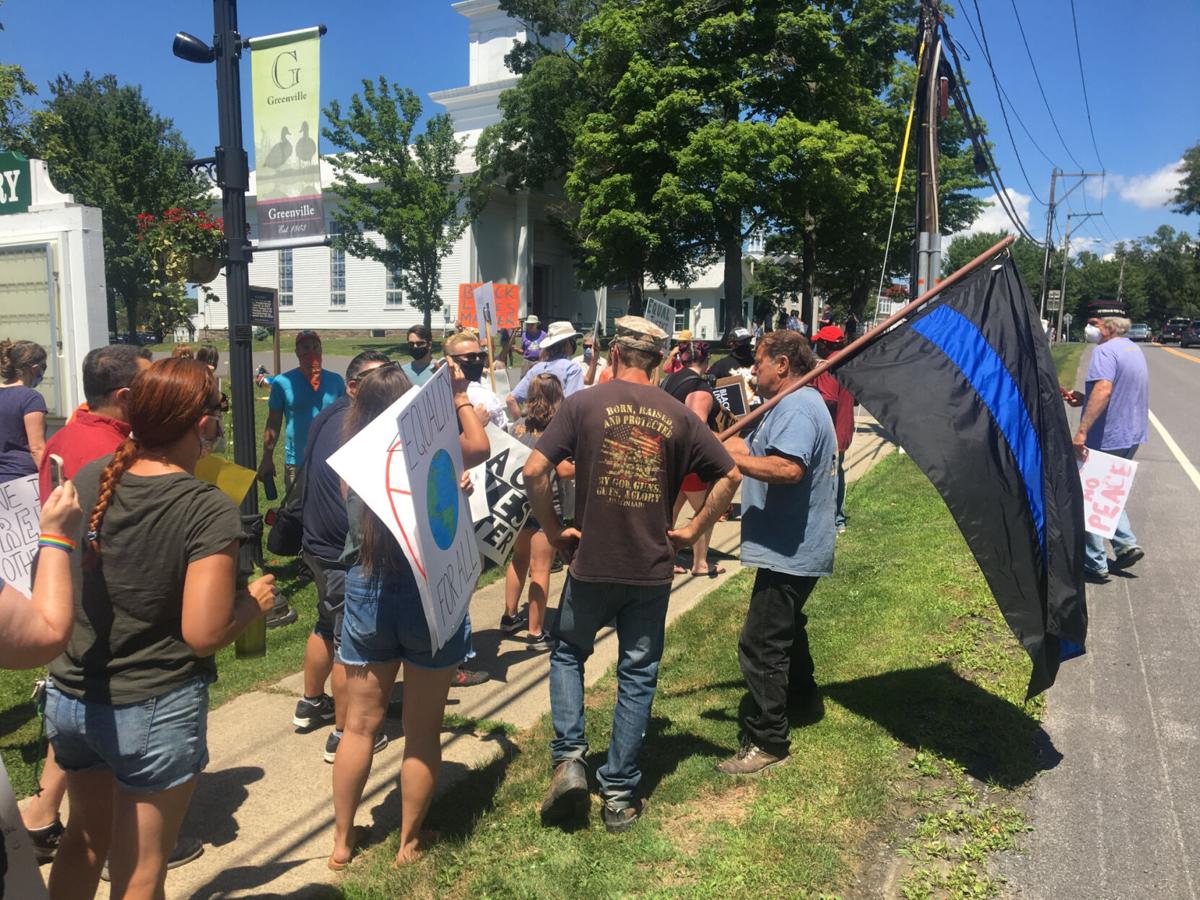 Black Lives Matter protesters were met by counterprotesters during a march on Route 32 in Greenville on Saturday. Nora Mishanec/Columbia-Greene Media 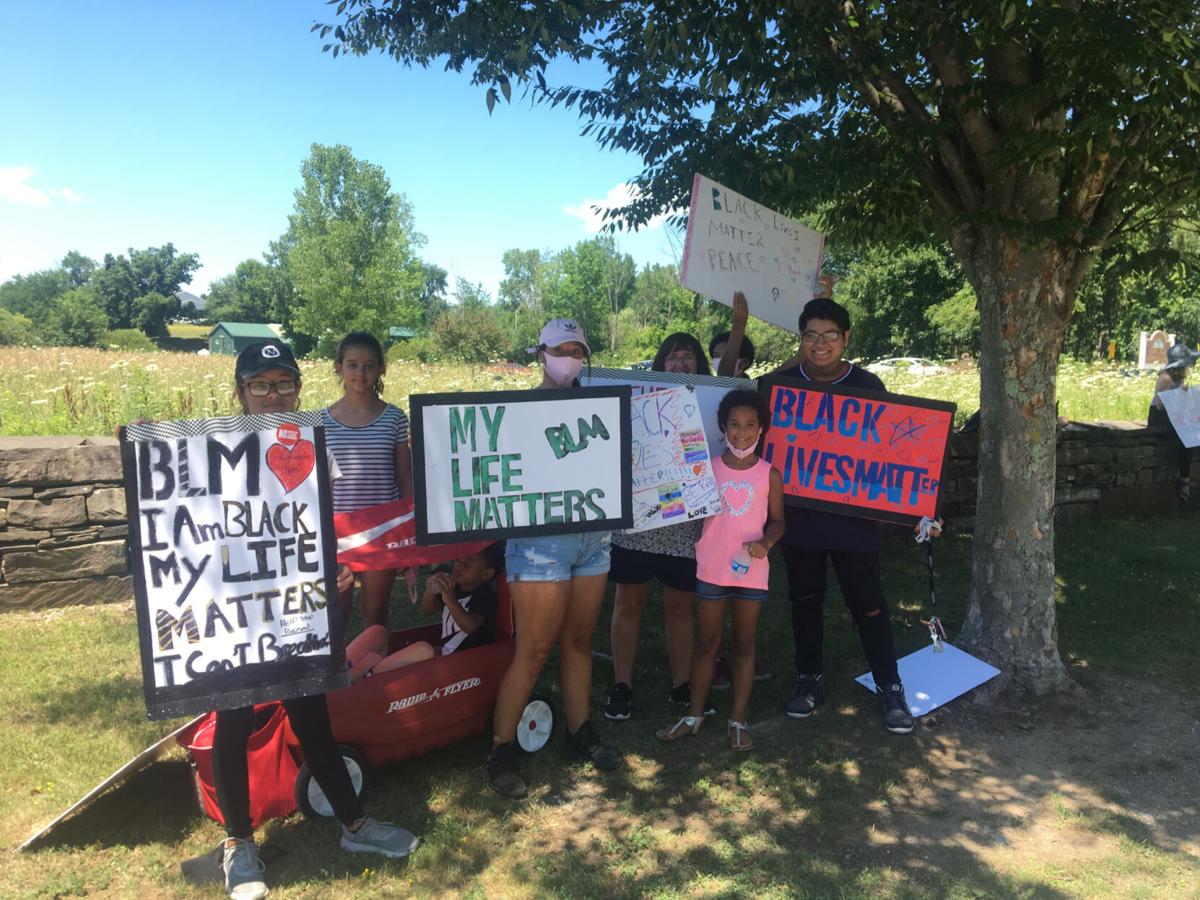 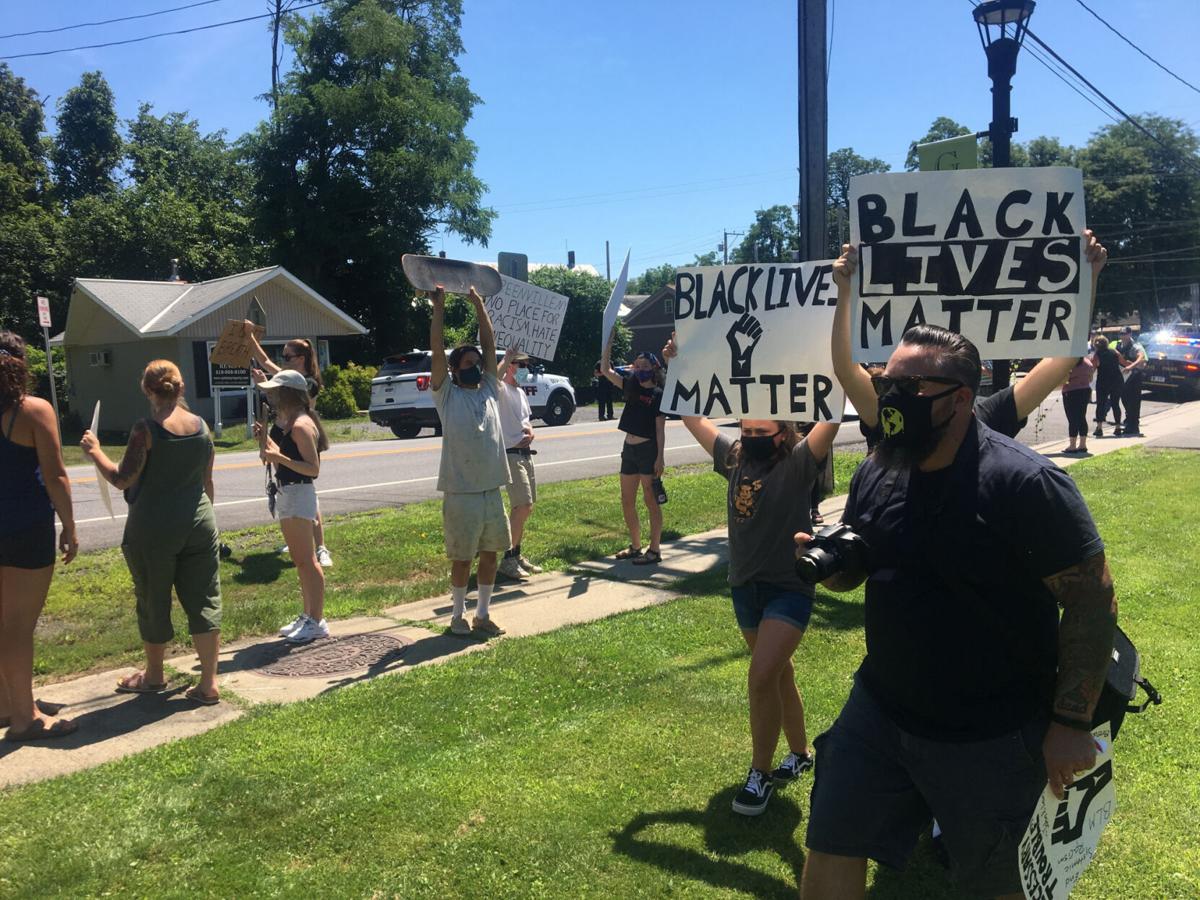 A rally in Greenville on Saturday in support of Black Lives Matter. Nora Mishanec/Columbia-Greene Media

Black Lives Matter protesters were met by counterprotesters during a march on Route 32 in Greenville on Saturday. Nora Mishanec/Columbia-Greene Media

A rally in Greenville on Saturday in support of Black Lives Matter. Nora Mishanec/Columbia-Greene Media

GREENVILLE — More than 150 people descended on the George V. Vanderbilt Town Park Saturday afternoon to show their support for the Black Lives Matter movement, holding handmade signs with slogans such as “Say No to Racism,” “Unite for Equality” and “Help Open Peoples’ Eyes.”

Protesters walked the mile-long loop from Vanderbilt Park to Veterans Park and back, bringing attention to what several people called “a culture of close-mindedness” in Greenville that fosters hostility towards people of color.

But not everyone who came out Saturday appreciated the marchers’ message.

The Black Lives Matter supporters were met at Veterans Park by fierce opposition, including a group of about 25 counterprotesters and a separate group of about 20 veterans who said they were there to protect the park from vandalism.

One counterprotester drove his motorcycle in front of organizer Azraelle Story as she passed the Greenville Library, an incident that Story caught on camera. The driver was ticketed by police, Story said.

A different motorcyclist drove in front of a group of marchers, clipping one of them. Visibly upset, the marcher who was struck filed a report with a member of state police who was on the scene.

Some of the counterprotesters shouted obscenities at the crowd and several crossed the street to confront the Black Lives Matter protesters.

Story said she was taken aback by the vulgarity of the counterprotesters, but encouraged the Black Lives Matter marchers to remain respectful. She marshaled the crowd away from Veterans Park as tensions escalated, she said.

Many participants, including Story, expressed their surprise at the high turnout. The march was intended to bring the town’s Black Lives Matter supporters out of the shadows, she said.

“I never realized how many people are like-minded,” she said. “I have never felt more connected to my community than I did today.”

“We need to show support for anti-racism in our rural community,” said Jaime Winans-Solis, who marched with her husband Jake Solis and their three children, who she said are among the “handful” of Latino students attending Greenville schools.

The couple felt it was important to make their children aware of the Black Lives Matter and anti-racism movements.

“This is my first protest, but it won’t be their last,” Solis added, pushing a stroller as his toddler walked alongside him.

The group of counterprotesters, most without masks, stood on the opposite side of the road holding flags and signs with messages in support of the police.

Lynda Costello, of Freehold, said she rejects discourse that pits protesters against police.

“It is specifically intended to divide,” she said.

In the days leading up to Saturday’s march, opponents of the march posted threats on social media and circulated rumors that protesters would be brought in on buses from out of town.

The attendees came from the local community, said Chris Karle, a 10th-grade teacher at Greenville High School who brought along his kids, aged 11 and 14.

Karle said he was “impressed and overjoyed” by residents’ support for the march.

“Everyone I saw was a local,” Karle said, adding that many of his students and former students attended, some with their parents in tow.

Several of the people who attended in opposition to the march said they did so out of fear that the protesters would become destructive.

A group of veterans, organized by Don Savino, of South Westerlo, stood guard in front of the gazebo at Veterans Park during the march.

The veterans were there to protect the park and show support for “the men in blue,” said Savino.

“We are protecting hallowed ground,” he said.

Ray Kosorek, of Westerlo, said he was afraid the Black Lives Matter protesters would deface the park’s veteran’s monument with spray paint.

Such fears were unfounded, protesters said.

Story emphasized the peaceful nature of the protest.

Story and her family watched from their car as a torrent of people marched past holding signs and chanting in support of the Black Lives Matter movement.

The experience galvanized Story to organize her own protest in solidarity with the Juneteenth marchers. But the organization process was not always easy.

Story said she faced hostility and intimidation on social media while publicizing the protest, which prompted her to alert state police and the Greene County Sheriff’s Office to the threatening nature of the online discourse.

Story advertised the event on a Facebook page for Greenville parents, but her post was removed by the page’s administrators.

“I am so proud of my community,” she said Saturday evening. “I want it to keep going. I don’t want it to stop here.”

Why all the hate towards a teacher of all people

Check out what BLM is really about. Here’s a racist Marxist BLM LEADER caught on tape. https://banned.video/watch?id=5f0f4bd6677a7f01e92475db

A 10th grade teacher brings their 11 and 14 year old children to a protest sponsored by a group which has been on t.v. For months burning cities, looting, rioting, assaulting and murdering innocent people. Someone should be investigated for child endangerment. Sorry, but facts don’t lie. Months of destruction, assault and murder and someone brings their children? That’s lunacy.

A 10th grade teacher brings his 11 and 14 children to a protest sponsored by a group which has been on the tv for months burning cities, looting, rioting, assault and murder??? Someone should be investigated for child endangerment. Sorry, but facts don’t lie. Months of destruction, assault and murder and someone brings their children??? That’s lunacy.

BLM is a Marxist movement, parading around this community under the guise of love and peace. Yeah, the same BLM movement responsible for destruction of property and memorials, throughout our nation. Oh, BLM "protesters" also terrorised the McCloskeys, at their home in St. Louis, Missouri.

This article is a hit piece, directed against respected citizens of Greenville. You're fake news. Defunct the media!

It would be helpful to know how RUMORS are started and disseminated. There was a rumor about “busing” mentioned in this article. It was misinformation. Organizing on misinformation happens wherever people are using constitutional rights to advocate for “justice for ALL,” voting rights, basic minimum wage, healthcare, income equality, access to clean water, right to fair trials. Who is spreading rumors so that people do not organize for their own interests and better life, but rather organize on hate against a group of people ? Rumors of hate and division should be immediately suspect. Locals should get together and talk to dispel rumors so there will be fewer illusions to deal with.

The negative comments here are pathetic...some folks have nothing to be proud of but their own ignorance. I heard the BLM march organizer speak on the radio and she was so inspiring...keep doing the Lord's good work, let the BLM marches continue!

Here’s a video of a BLM LEADER showing how loving she is while calling people coons and admitting it’s a Marxist movement. Hope this helps. Have a great day and God Bless you. https://banned.video/watch?id=5f0f4bd6677a7f01e92475db

It is great to see that even in a small rural newspaper, that the left wing bias is alive ,well, and on full display!

Please stop and make this a one time event. No racism in Greenville. Please do not bring attention to the National group. Locals will not like it.

Your reporter needs to retract what she stated in the article because that is not what I said to her. I stated that the veterans were there to protect the Veterans monument and our Flag from any damage while the rally was going on. I stated that BLM has the right to march and protest ,thanks to 1st Amendment of the Bill of Rights I stated that BLM has a reputation of destroying personal property and becoming violent and we were there to protect the the memory of those who have protected us. If your paper is going to quote someone's statement make sure it is accurate, I never mentioned spray paint.

Fake News on a Local Level.