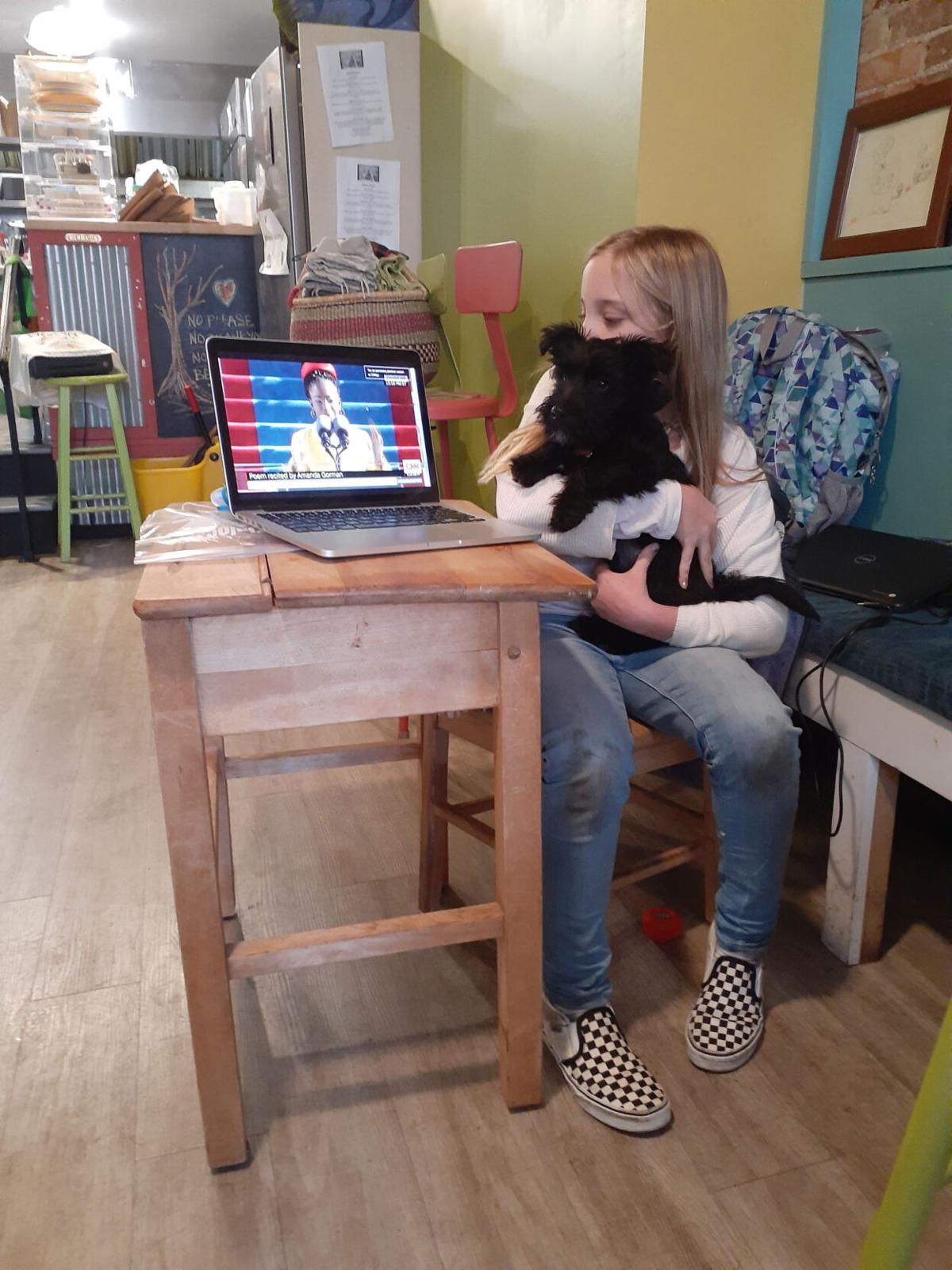 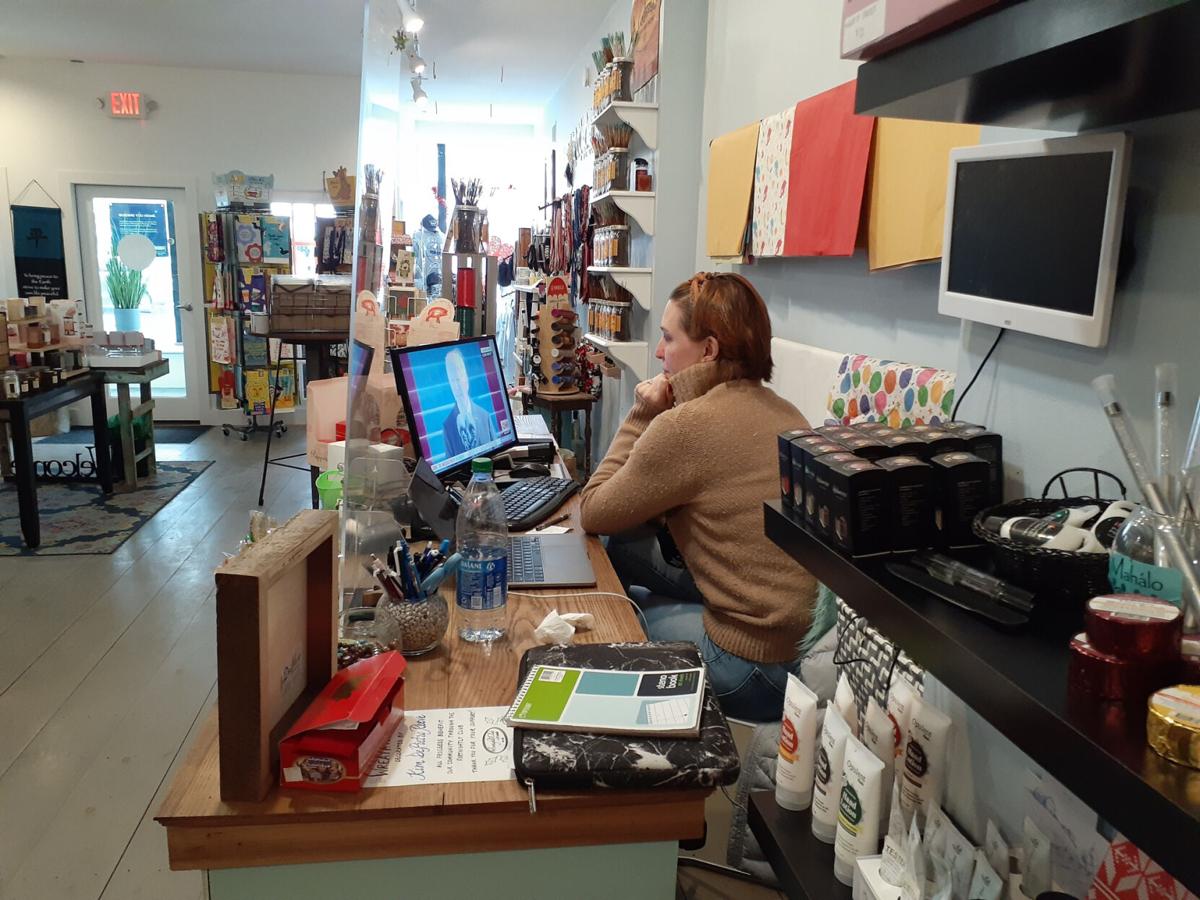 CATSKILL — Business owners up and down Main Street tuned in to the presidential inauguration Wednesday.

The community stood by while President Joe Biden took his oath of office, watching on their laptops or cellphones.

Tara Templeton, owner of Mahalo Gift Shop, listened to Biden address the nation Wednesday behind the Plexiglas at her cash register.

“I’ve been looking forward to today because we have not had leadership in a long time,” Templeton said. “The major lesson I take away is how to win with humility and lose with dignity.”

Templeton said she wishes to instill this message in her children.

“Unfortunately there is only one side of that I can actually show them,” she said. “I wish I could show them losing with dignity because we’re all asked of that.”

Templeton said she found it disgraceful the outgoing administration was not present at the ceremony.

“It’s not who we are as a country and not who I want my children to be,” she said. Templeton felt proud to see Kamala Harris become the first female vice president, she said.

“It’s a big day for women,” she said. “It shouldn’t have taken this long, but I’m proud we finally got there.”

Eight-year-old Hazel Nichols, of Catskill, watched the inauguration at The Mermaid Cafe with her canine companion, Clover.

“It was kind of cool,” Hazel said when asked what it was like to see Harris become vice president.

“I think it’s important as a young lady for her to watch a woman be inaugurated into such a high position,” Michelle Williams, owner of The Mermaid Cafe, said. “She has been following the election and it’s important to see the outcome after the siege at the Capitol last week, to see it can still happen, to see democracy upheld even in the wake of that.”

Catskill resident Martin Miller said the inauguration was all part of the democratic process.

“People get voted in and people get voted out,” he said. “We all have our different political parties, but the only way to change it is to vote. The real votes count — not the fake votes, not the dead people votes.”

Greene County Independence Party Chairwoman Irene Acker Sr. was dismayed to see her party lose its line on the ballot. The status of a political party is determined every four years during the gubernatorial election. Any party whose gubernatorial candidate receives at least 130,000 votes or 2% of the total votes, whichever is higher, will remain on the ballot as an official party. The Independence Party received less than 1% of the votes.

Greene County Democratic Committee Chairwoman Carolyn Riggs expressed hope that the new administration will help the nation get through the tough times.

“Today reaffirms democracy with every gesture made and every word spoken,” Riggs said. “Today’s inauguration means more to me, to women, to young girls across our communities than many would assume. And while we note this historic transition of power at the national level, it is important to remember that democracy requires participation. We have an opportunity to move forward as a country united in support of all the American people. There is a lot of heartache in our communities right now: deterred by a virus that is wreaking havoc in our homes, financial distress of our businesses, and too many doing too much to barely stay afloat. I’m hopeful that the new administration will lead with integrity, honor and respect, and bring all voices to the table, no matter political affiliation, to tackle our country’s most complex issues. We must do the same in Greene County.”

Jonathan Gross, of Mountain Top Progressives, said he believes Biden will see the nation through these trying times.

“I’m personally inspired by Biden’s vision,” Gross said. “I think he is a practical leader with practical solutions. His cabinet is astonishing and inspiring. He’s not a pushover and I think he’s an example for all of us that are doing what we can to maintain that vision but not to back off of our very, very strong beliefs. The country needs a vision in a time of uncertainty, a strong leader with a good heart and I think that he more than anybody will be able to unite us and I can’t speak for all of Mountain Top Progressives but I can say, for me, that vision inspires me to do more community action.”

Daniel Donnelly, a judicial district representative with the Libertarian Party, said he hopes the new president is mindful of citizens’ personal freedom.

“We wish President Biden well, we wish him success and we will remind him that this country was founded on liberty and hope he understands a greater degree of personal liberty is what Americans as a whole favor.”

Aliya Schneider contributed to this report.

Chris---Do a Google search on him. Numerous arrests, frivolous lawsuits etc. Pathetic is a good word.

I can breath. Unfortunately the dense fog of non-thinking still runs Greene County. It’s a good start that Vincent Seeley left. He suppressed Black Lives Matters in horrible ways, and got the appropriate blowback. Destroying 80 Bridge St., a historic building with nothing substantially wrong with it, to justify constructing a $90 million new club house for local police, is sick. Opioid overdoses are climbing again. COVID-19 deaths are rising. We were in pathetic financial shape before COVID-19.

Both Seeley’s gone (Greg and Vincent) is a good start. Place a minority or two ont he Village Board is a good second step. Replace most of the county administrators and legislators is a great third step.

Time’s running out folks. God/Nature provided this enormous time out. How much pain do you need to feel before we wake up?

The Rip Van Winkle logo for the village is STILL the closed eyes RIP. The point of Washington Irving's story is that he woke up. It took 20 years, but he transformed.

Do you get tired of making baseless accusations? I know I get tired of them. There’s this neat system called voting and this happens during elections, and that’s how legislators and board members attain their positions. Not by “placing “ persons in these positions of leadership and representation. You’ll never be happy. The jail is going up, the old jail is gone, and there will be a parking lot, you’re still not relevant, and as long as this area continues to vote the way it has you will continue to get the representation that gets voted into office. So, while you’re breathing, might I suggest you start looking for another place to go to bloviate and spread your diatribes.

I think he gets off by the negative comments that are made. I've made many myself. He deleted people from his FB page because of comments. He knows there is nothing he can do about his "issues" with Catskill government. Not sure what he will gain by his delusional comments such as "removing Sheriff Seeley from office" and other false statements. I think he is mentally ill. Fortunately there are not too many Greene County residents that agree with his rantings. I did agree once or twice by his comments though. Can't remember which ones though. :)

Rory, I often wonder if he’s paid by HV360 almost as a quasi-click-bait kind of thing. He repeats the same tired, nonsensical, disproved talking points and does nothing to further his endeavors. It’s really pathetic. Like, get a grip bro, you lost. Repeatedly. He must feel really ineffectual and defeated.