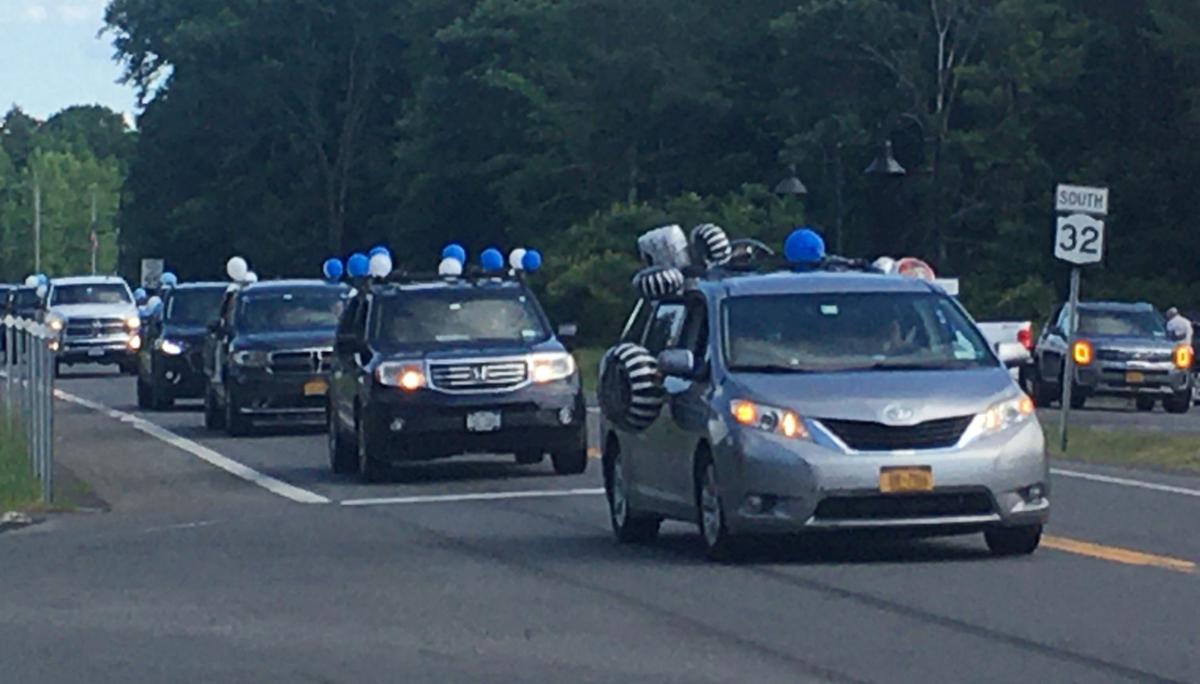 A car parade celebrated the achievements of the Class of 2020 in the Cairo-Durham school district Friday afternoon. Bill Williams/Columbia-Greene Media 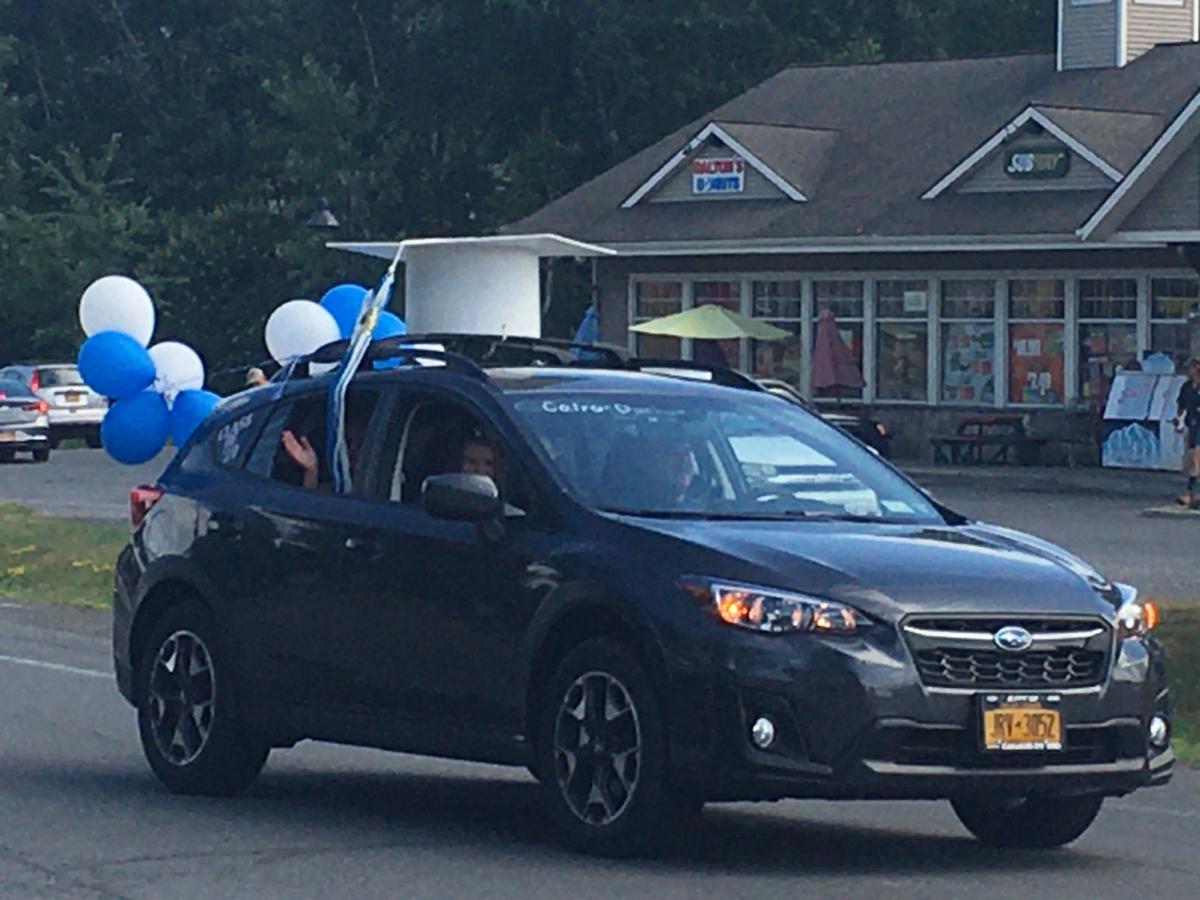 Even the vehicles got into the spirit of things for the Cairo-Durham parade honoring the graduates of 2020. Bill Williams/Columbia-Greene Media

A car parade celebrated the achievements of the Class of 2020 in the Cairo-Durham school district Friday afternoon. Bill Williams/Columbia-Greene Media

Even the vehicles got into the spirit of things for the Cairo-Durham parade honoring the graduates of 2020. Bill Williams/Columbia-Greene Media

Graduation ceremonies across the Twin Counties are taking a variety of forms in the wake of COVID-19.

Gov. Andrew Cuomo announced June 7 that outdoor graduations of up to 150 people that abide by social distancing are permitted. Catskill Central High School released a pre-recorded ceremony Friday at 6 p.m. Cairo-Durham Central School district held an outdoor ceremony in the school’s parking lot that was livestreamed at 6 p.m. Coxsackie-Athens and Windham-Ashland-Jewett held an outdoor ceremonies which the districts livestreamed at 6 p.m. Friday. Saturday’s outdoor graduations included Greenville at 8 a.m. Hunter-Tannersville at 8:30 a.m.

Catskill’s graduation plan involved having graduates come into the school individually throughout the past two weeks and walk a graduation circuit. The footage filmed during this two-week period was then compiled and released Friday. When graduates would come to have their walk across the stage filmed, their temperature was taken at the door. The next stop was a table where parents could speak on behalf of their graduates, followed by a table where corsages and flowers were available. The last table was where diploma sleeves and jackets were distributed.

Parents would then wait on stage for their child’s name to be called. When the graduate was called the stage, they would walk across the stage to where their parent(s) were waiting with the diploma and photos were taken.

In his commencement speech, Superintendent Ronel Cook said he was optimistic that a more traditional celebration will be possible.

“I want to reassure you that as soon as the social distancing restrictions are uplifted that we will celebrate your accomplishments with a traditional graduation on the front lawn of the Middle School,” he said. “I am optimistic that we can accomplish this goal in either July or August. If not, we will schedule a graduation when feasible, so that you can be celebrated.”

“I know how disappointed you are,” he said. “I am disappointed as well. My grandfather, who was a sharecropper, always taught me to make the most of every situation. He reinforced the idea of when life gives you lemons, you make lemonade.” This sentiment will help students throughout their lives, Cook said.

Asif spoke of change in her speech.

“I can start this off by saying one year ago today none of us could have imagined life would be like this today,” she said.

“The future we thought we had can no longer be,” Asif said. “It’s change to what we’re currently living through. We are living through a very hectic and monumental period of time. This country is going through a serious pandemic while also figuring out social-justice issues. These issues highlight stuff tht some of us may not have experienced or have known about, while others may have been experiencing this all along. If you aren’t Black, you may have never given a second thought about being stopped by police. If you were able bodied and healthy before this pandemic, you may have never given a second thought to going outside and going to the grocery story, or a restaurant, or just hanging out with friends.”

“If you look at history, even recent history, you see that there is indeed progress...,” Asif said. “Over time, the cycle is clearly, generally upwards. And it doesn’t happen by laws of nature. And it doesn’t happen by social laws...It happens as a result of hard work by dedicated people who are willing to look at problems honestly, to look at them without illusions and to go to work chipping away at them, with no guarantee of success-- in fact, with a need for a rather high tolerance for failure along the way and plenty of disappointments.”

Asif believes the class of 2020 has the strength to invoke great change, she said.

U.S. Rep. Antonio Delgado, D-19, was among the commencement speakers for Coxsackie-Athens.

Despite the pandemic-related changes to the ceremony, the celebration was still important, Delgado said.

Valedictorian Zarib Alam, who has been accepted to NYU, described the changes he experienced his senior year as “special.”

“I didn’t think my senior year would be over Zoom or that my four years of high school would culminate with me standing cap and gown in the grass shouting at an iPad,” Alam said. “But this is an unprecedented time. We’re seeing a global pandemic and public health crisis. Injustice brought to light and widespread activism.

“Sometimes I ask why it had to be us, our class, that was faced with such unrest during a pivotal moment in our lives. Why couldn’t we enjoy prom and senior week like those before us? Why couldn’t we enjoy our final spring before we’re kicked out of the house? Why couldn’t we have a normal year? It’s easy to look around and ask these questions and deem it a misfortune, but I truly believe it’s something special.”

The calls for social justice in recent months have been eye opening, Alam said.

“These past few months have shown the responsibility that we have carried. How we must go out there and correct the wrongs of this world. How we must shape a future of positivity, equality and justice, and be responsible for those around us. And who better, who better than us? We understand the power of our voice and our actions and we know how to spread a positive message,” Alam said.

Salutatorian Aiden Boehm, who has been accepted to West Point, said the loss the traditional school activities allowed him to explore other aspects of his life.

“I realized I’m a decent fisherman and a terrible golfer,” Boehm said. “My grandmother’s lawn takes exactly one hour and 52 minutes to mow, and my chocolate Lab loses all control around a body of water. This certainly wasn’t how I pictured the end of my senior year. I can say with confidence it was unlike anyone’s senior year before or after this year.”

Boehm sees the positive aspects to his senior year experience, he said.

“Many of us have been told we are being robbed of priceless memories,” he said. “Instead, I argue, we’ve made our own. I can honestly say I have never felt more connected with the class I stand here with today because we are forever bonded by this unique experience.”

Ready for adventure? Expand your horizons from home

5 surprising facts about beef and sustainability

Don’t Risk A Ticket. Avoid Parking In Spots Reserved For People With Disabilities