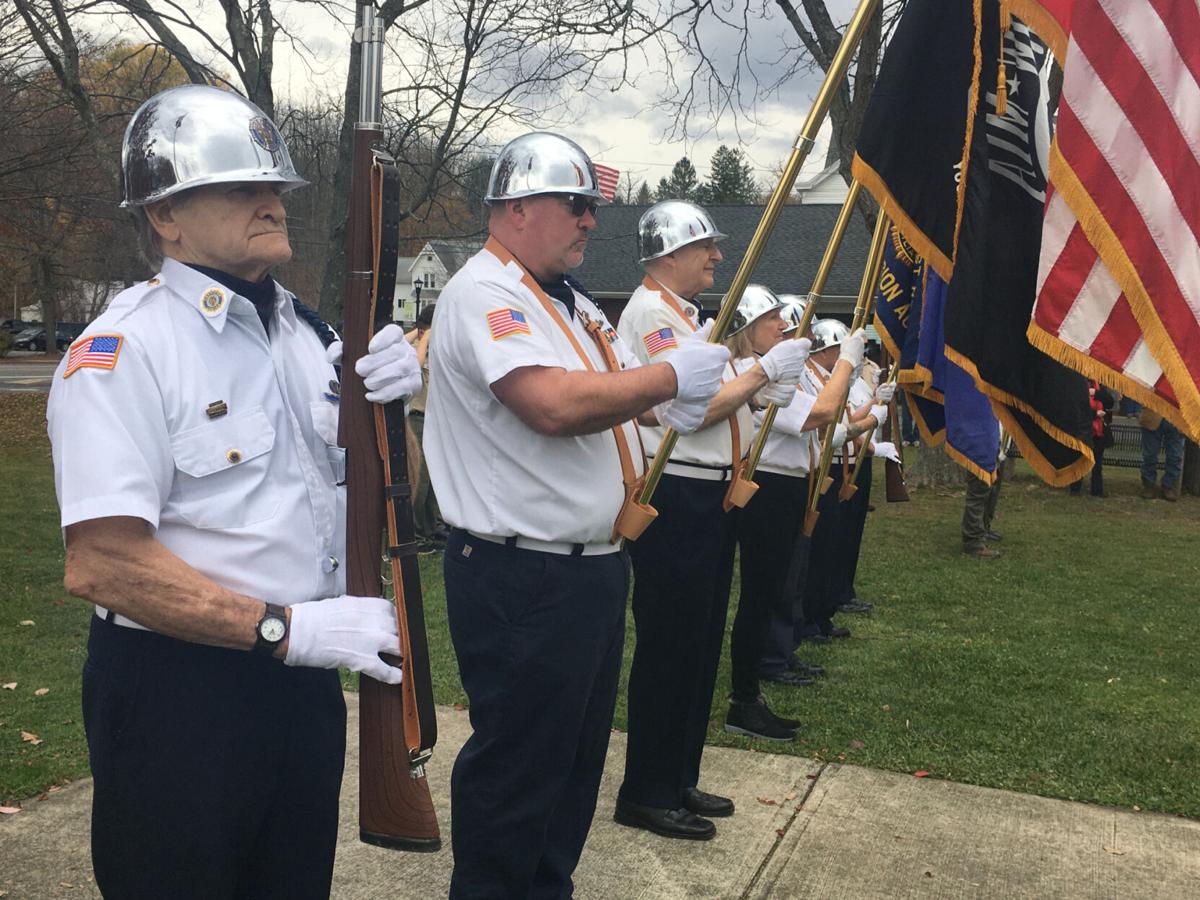 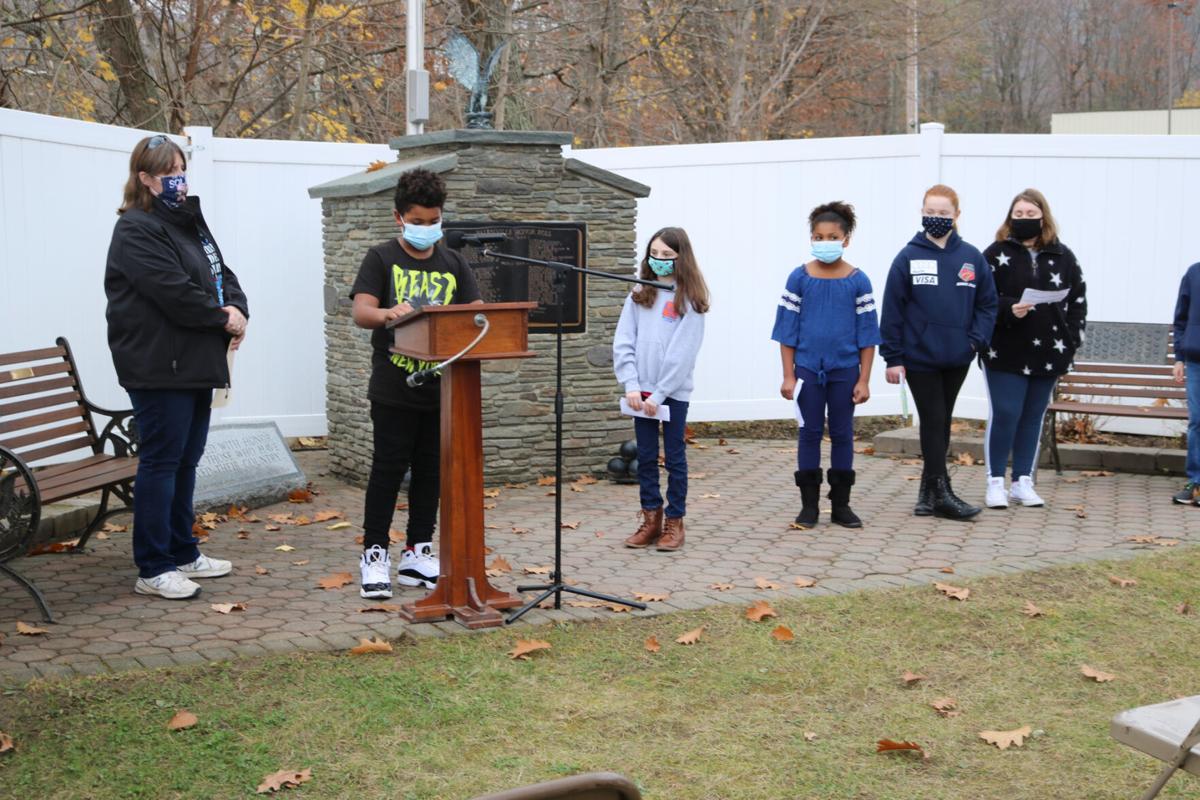 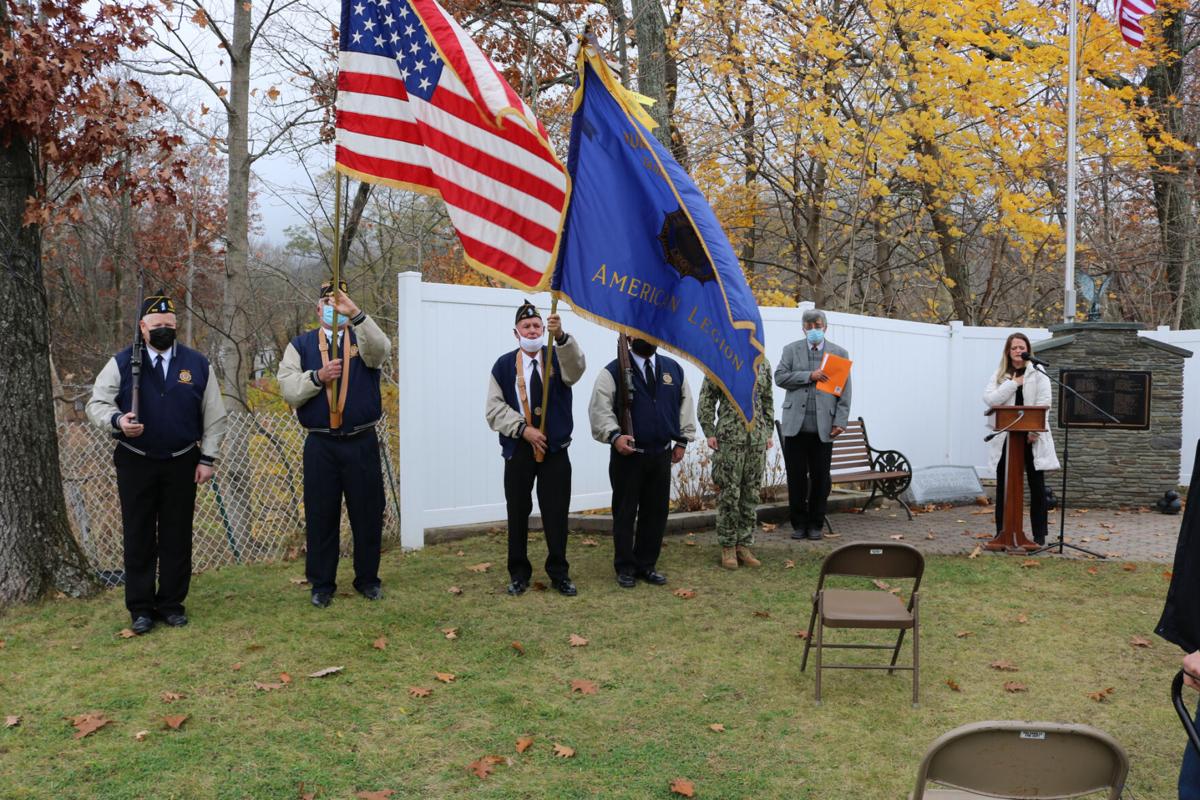 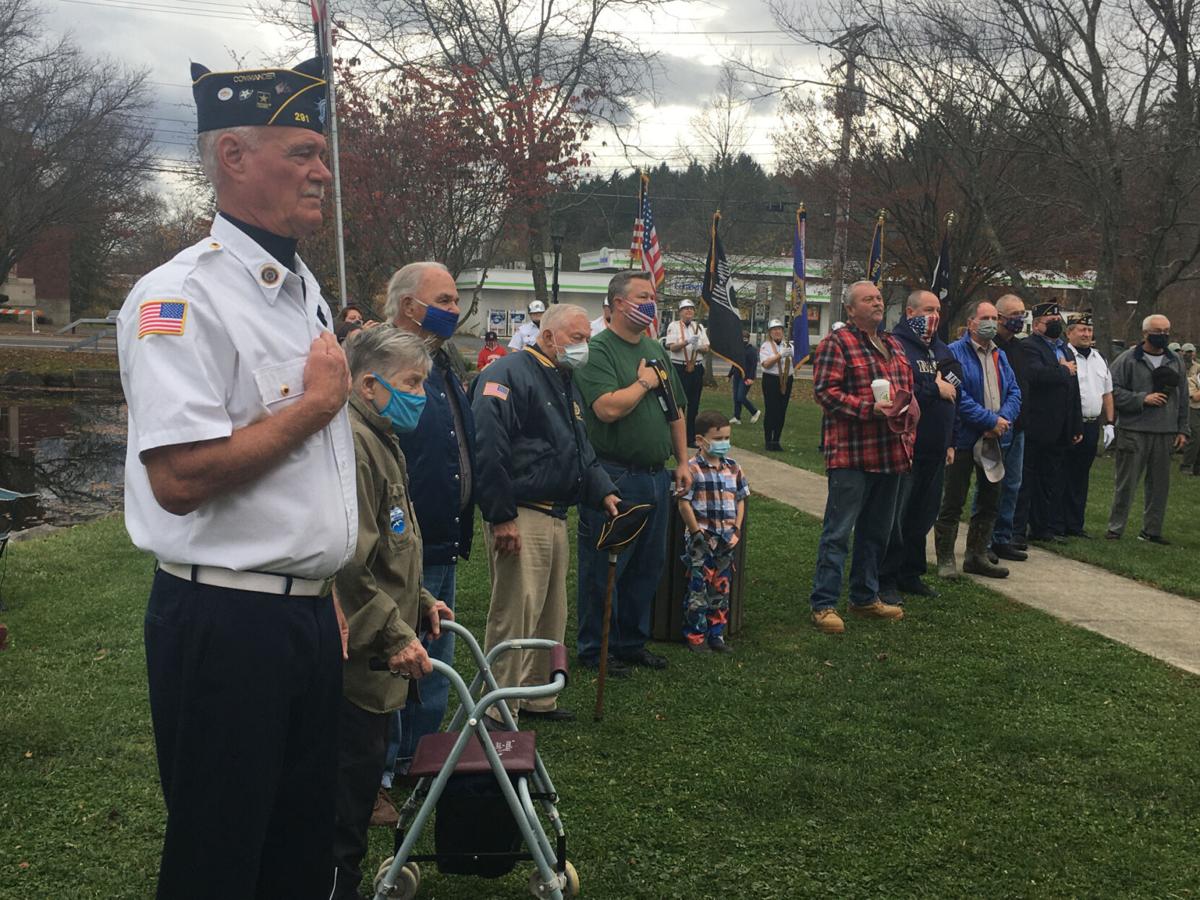 Veterans line up in a semi-circle around the gazebo during the Veterans Day service in Greenville on Wednesday, including American Legion Post 291 Commander Skip Spinner, left, and Pat Wall, who served in the Women’s Army Corps, second from left. Melanie Lekocevic/Columbia-Greene Media

Veterans line up in a semi-circle around the gazebo during the Veterans Day service in Greenville on Wednesday, including American Legion Post 291 Commander Skip Spinner, left, and Pat Wall, who served in the Women’s Army Corps, second from left. Melanie Lekocevic/Columbia-Greene Media

Veterans Day ceremonies were held in communities around Greene County on Wednesday to honor the servicemen and women of the armed forces.

Some services were abbreviated because of the COVID-19 pandemic, and several communities, including Cairo and Coxsackie, canceled their ceremonies over concerns about the outbreak.

Despite the surging pandemic, the Catskill community showed up in full force Wednesday to show their appreciation for veterans.

“We decided back in September we wanted to give it a go,” said Ed Synan, former president of the Palenville Fire Department.

The only change the fire department had to make was eliminating the refreshments typically served after the ceremony in the firehouse, Synan said.

“The biggest thing we had to worry about was the rain, but that didn’t happen,” he said. “Not yet anyway.”

In light of COVID-19, Synan said he expected the turnout might be smaller this year. But that wasn’t the case.

“There might have been even more people than normal,” he said.

Honoring veterans is important every year and this year was no exception, Synan said.

“We owe our veterans an awful lot of thanks for the work they’ve done,” he said. “This should be done every year. We’re happy to be able to do this. We said, if there’s any way we can do this, we’re going to do it.”

“It’s important for our students to participate today to honor our veterans,” Luvera said. “This year, it was also important to try to get kids back into the routine of doing things in the community.”

“It’s extremely important to have [the ceremony],” he said. “Our veterans giving their service over the years, gave us our freedoms. Being Catskillians, we have to be out here to support our people.”

Local Army veteran Fred Edwards performed the traditional wreath-laying at the monument, engraved with the names of local veterans who have died.

The monument dates back to 1948, when the Palenville Fire Department Ladies Auxiliary put the display in front of Rowena Memorial School, Synan said.

“It was moved to the fire district property when Rowena passed from school district ownership to private hands,” Synan said. “It was once again disturbed due to the expansion of the fire station. The plaques were saved, along with a small amount of the stonework, but the monument was disassembled.”

The inspired work of a Boy Scout made the current monument a reality, Synan said.

“It was rebuilt through the efforts of Matt Simons, a Palenville resident and Boy Scout of Troop 131, who undertook that task as his Eagle Scout project.”

Boy Scout Troop 131, along with the Bunt-Brewer American Legion Post 165 of Tannersville, served in the color guard.

Dozens of veterans and their supporters, all wearing face coverings, gathered at Veterans Memorial Park at the intersection of Route 81 and Route 32 to honor the armed forces on Veterans Day.

Dozens of veterans turned out, including Pat Wall, who served in World War II as a member of the Women’s Army Corps, or WAC, the women’s branch of the U.S. Army.

Seeing so many veterans and residents turn out for the service Wednesday was gratifying, Wall said.

“This is wonderful,” Wall said of the service. “It’s just beautiful.”

Wall’s family is steeped in military service — both of her brothers, and their father, served in both World Wars. One brother, a ranger in the U.S. Army, was killed in action in southern France.

“Both of my brothers were veterans of World War II and my oldest brother, we got the telegram on Veterans Day that he had been killed. He was overseas for two years. It was terrible,” Wall said. “Veterans Day, for me, holds both good and sad memories.”

Her father was preparing to go overseas with his unit in World War I near the war’s conclusion, Wall said.

“They were getting ready to go overseas and the armistice was declared,” Wall said. “My father was spared the horrors of war.”

“We are here to remember those who served and those who are actually serving now. We are very blessed,” Balta said.

Veterans Day, originally known as Armistice Day in the years following World War I, honors veterans of the armed forces, both living and deceased, as well as active servicemen and women.

“Veterans Day is a special holiday that honors all veterans who have served or are presently serving,” American Legion Post 291 Commander Skip Spinner said. “Today, this Veterans Day, we salute all those men and women who served this great nation. We keep in our thoughts and prayers the fallen, the missing and those who are serving right now.”

Veterans are owed a debt of gratitude and there are many ways the community can show their support and appreciation for the sacrifices veterans have made, Spinner said.

“There are many ways to honor a veteran — attending today’s service is one of those ways,” Spinner said. “Flying the flag in your yard, asking a veteran about their time in the military and listening to what they have to say. Teaching someone — a child, a friend or a neighbor — what is a veteran and what it means to be one, or just shaking a veteran’s hand and thanking them for their service.”

American Legion Post 291 Chaplain Jim Goode said a prayer for those serving and for the loved ones left behind.

“As they serve around the world, we ask that you guard their families and loved ones back home, provide them with peace and surround them with love as they mourn the absence of their loved ones and long for their return,” Goode said.

“My music teacher called my mom one night and she goes, ‘Would you mind letting Brody sing the national anthem and ‘God Bless America’ at the veterans’ service in Greenville?’ It was exciting,” Brody said after the service.