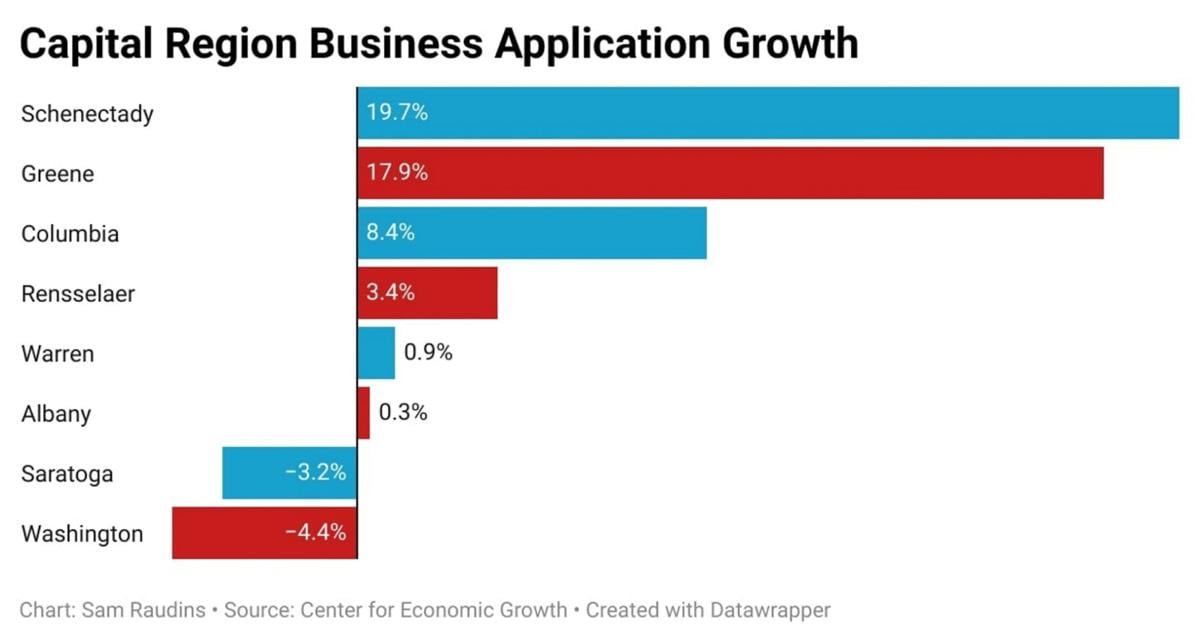 Greene County ranked second in the Capital Region for business formation application growth from 2019-2020, according to the Center for Economic Growth. 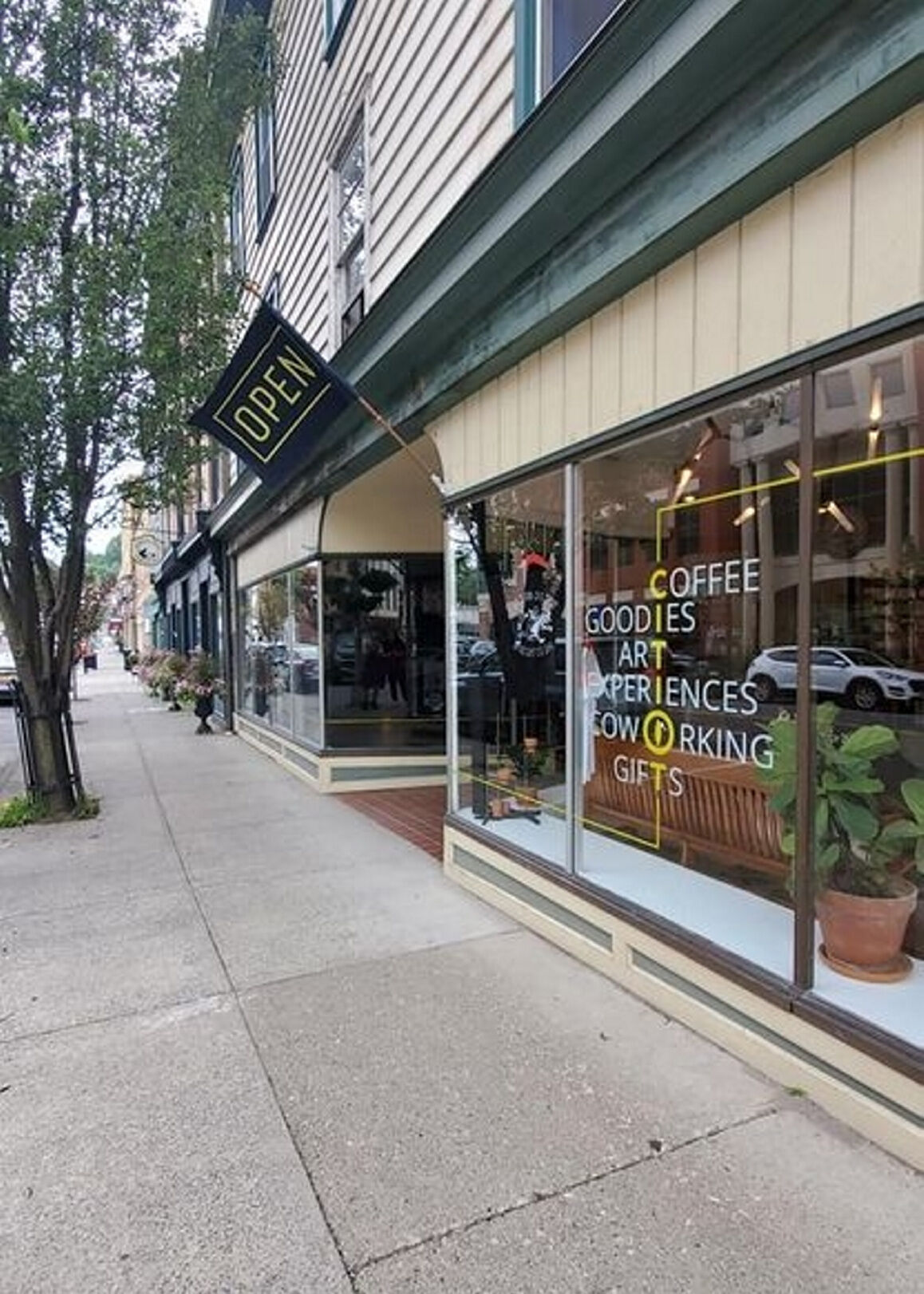 Citiot opened up shop on Main Street in Catskill on July 24. Contributed photo

Greene County ranked second in the Capital Region for business formation application growth from 2019-2020, according to the Center for Economic Growth.

Citiot opened up shop on Main Street in Catskill on July 24. Contributed photo

CATSKILL — Despite the onset of the pandemic and an array of related crises, the formation of businesses in Greene County grew from 2019 to 2020 by nearly 18%, according to a study by the Center for Economic Growth.

In the eight-county Capital Region last year, 9,465 applications to form a business were submitted to the Internal Revenue Service — a 3.2% increase over the previous year. Greene and Schenectady counties led the region in growth, with 17.9% and 19.7% increases respectively, according to the Center.

The study examined U.S. Census Bureau data that evaluated how many businesses asked the IRS for an Employer Identification Number, a unique number assigned to businesses for tax reporting. The study defines “businesses” as corporations, partnerships, nonprofits and sole proprietorships.

Although businesses needed an EIN to qualify for the Paycheck Protection Program, which provided small businesses with funds to pay up to eight weeks of payroll costs including benefits during the pandemic, additional research from the University of Maryland and the National Bureau of Economic Research said the drive wasn’t caused by the act because a businesses needed an EIN by February 2020.

Greene County Chamber of Commerce President Jeffrey Friedman said the county has seen a large number of businesses start up in the last few years, spanning many types of industries.

“We’ve had lots of new restaurants, some new manufacturing businesses and new art-related and creative economy businesses. It has been a wide array of businesses across numerous industries,” Friedman said. “So it’s been pretty broad and including in tourism — we’re seeing some new hospitality properties.”

Friedman said the growth could be a factor of a few conditions: people discovering Greene County as they leave more heavily populated areas, the availability of storefronts and commercial real estate and the efforts of the chamber to promote the area.

Other economic factors have contributed to the boom in Greene County, such as record retail sales, sales tax collection and real estate sales, Friedman said.

“There was opportunity and availability, which also was an important factor,” Friedman said.

“The by-product of this is if you live in Greene County, there’s so much more available to you that you used to have to travel much further to find, and in a lot of our towns, it’s available right on your main street now and it never was before,” Friedman said.

Because of the pandemic, Pim Zeegers decided to open a business in Catskill on Main Street: Citiot, a local and European-inspired coffee shop, retail store and co-working space, which opened July 24 across from the Greene County Office Building.

Zeegers was a Catskill weekender after buying a house there five years ago, but when the pandemic began, he and his family became full-time residents. He said the idea for a project in Catskill struck him last year while working in the garden and at the urging of his neighbor.

“I grew up in a small town in Holland, and so I relate to Catskill and the vibes of Catskill. And small-town vibes are universal — we just really enjoy being here. You meet so many people and that’s the great thing about having a store like this, too, is that people step in. It’s a lot of chatting, and there’s a lot of musicians in town, a lot of artists, a lot of fun people,” Zeegers said.

Greene County sales tax collection — which is from the sales of goods and services — from January to May 2021 exceeded $15 million - an increase of more than $3 million over the first five months of 2020, according to a report from the Office of the state Comptroller. Greene County’s sales tax rate is 8%, half of which goes to the state and the other half to the county.

“For the second straight month, local sales tax collections had a tremendous boost. Strong collections in May show the economy continues to improve as spending rebounds from the effects of the COVID-19 pandemic and the standstill it created in New York state in March 2020,” Comptroller Thomas DiNapoli said in a statement. “Combined with direct federal assistance and restored state aid, the recovery of sales taxes will help New York’s local governments rebound from the effects of last year’s revenue shortfalls.”

The County appears lack any decent plan for the $8 million COVID-19 stimulus money. That money already arrived. I have several suggestions: Build a hospital, even a satellite unit. Restore a Community Center to Catskill. Fund affordable housing. Fund a real A.T.I. Committee.

There's still almost no tech here. Tech, which is where most new money comes from, is largely non-polluting. The County and the Village of Catskill seem unaware that tech can buffer disasters like a pandemic. Overall, the county remains deaf to the needs of people in our safety net. The huge misdirection of funds for a jail is an example. The lack of efforts for affordable housing is another.