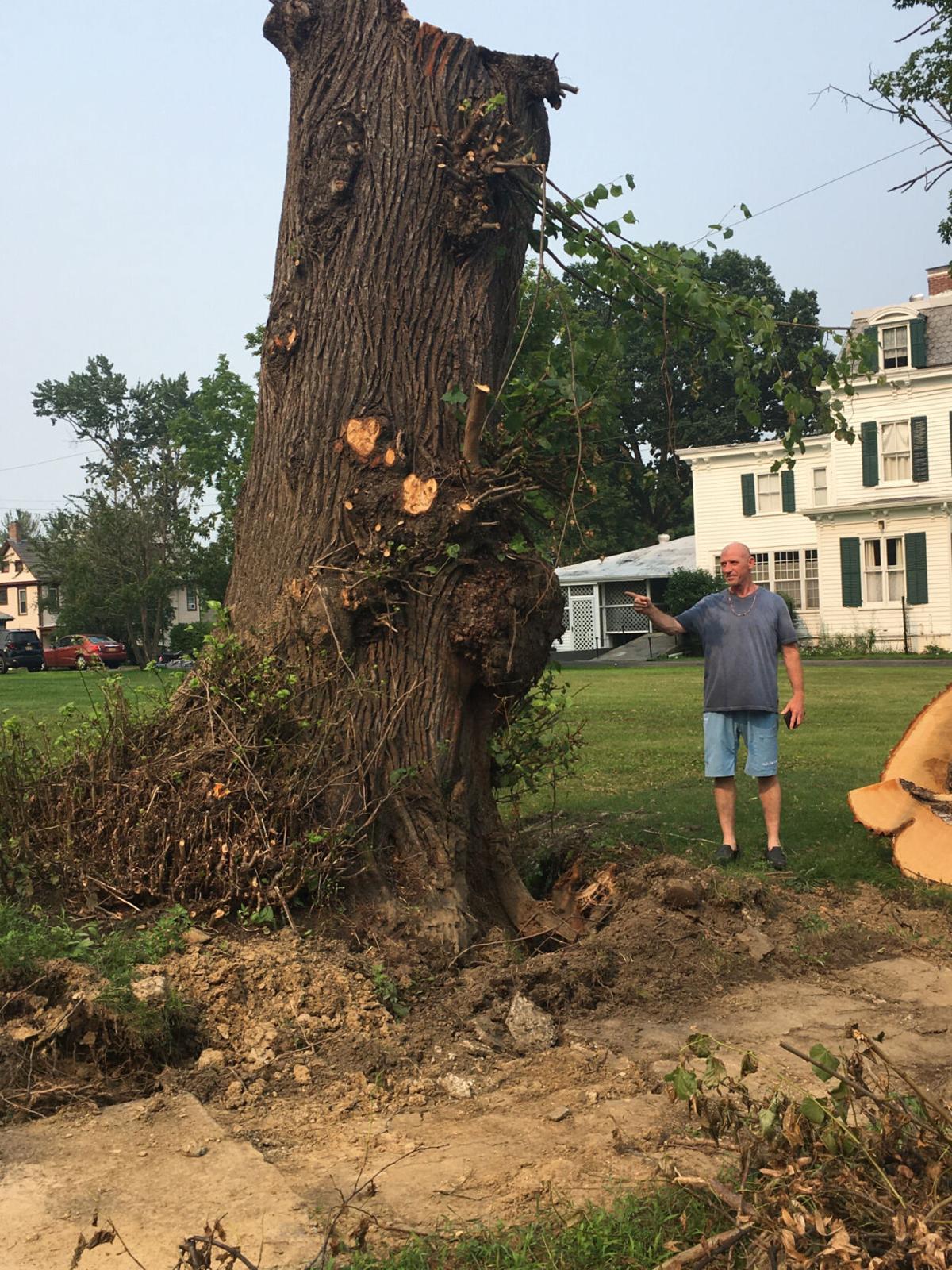 Paul Seney, owner of of W.C. Brady’s Sons Funeral Home, points to the 200-year-old tree that righted itself after crashing to the ground during the massive storm that tore through Coxsackie earlier this month. Melanie Lekocevic/For Columbia-Greene Media 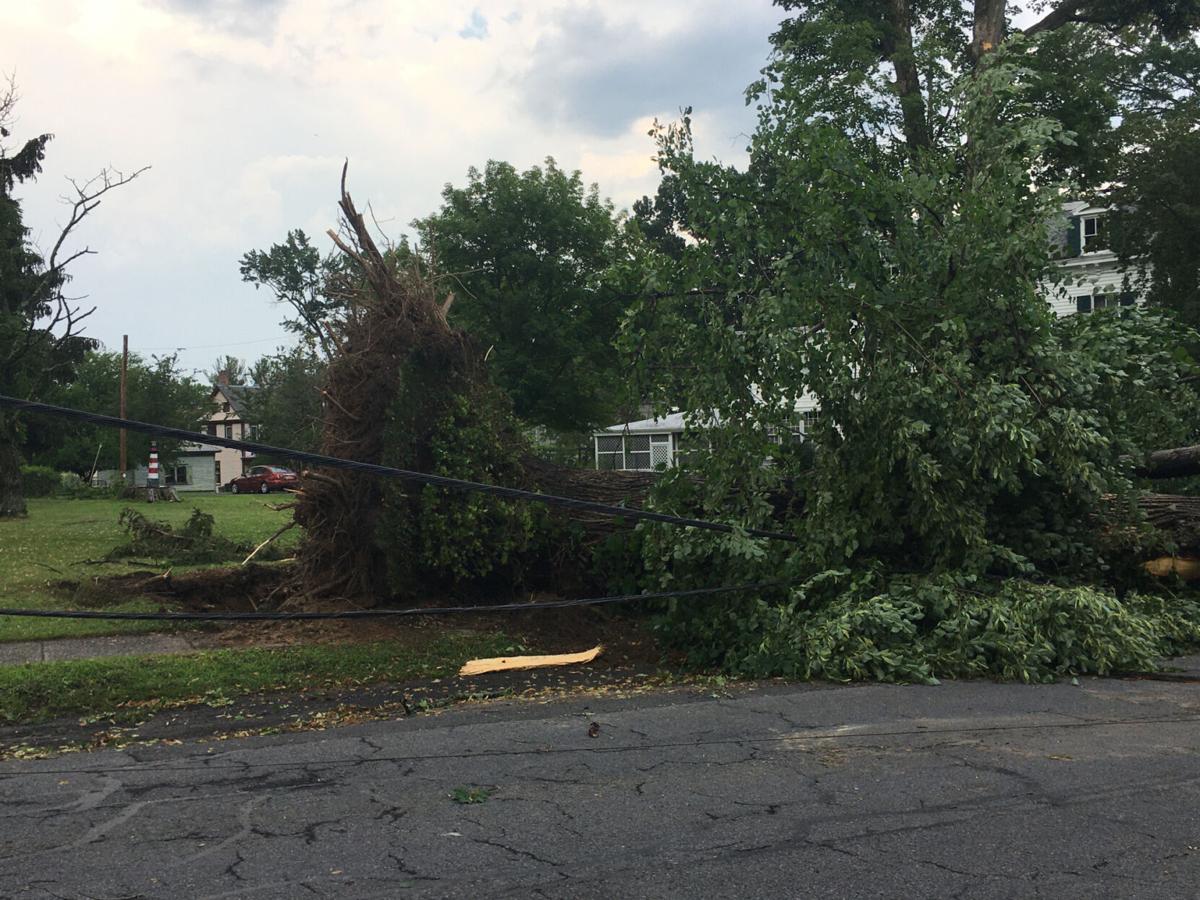 The tree in the aftermath of the storm, fallen to the ground on Mansion Street. Melanie Lekocevic/Columbia-Greene Media

Paul Seney, owner of of W.C. Brady’s Sons Funeral Home, points to the 200-year-old tree that righted itself after crashing to the ground during the massive storm that tore through Coxsackie earlier this month. Melanie Lekocevic/For Columbia-Greene Media

The tree in the aftermath of the storm, fallen to the ground on Mansion Street. Melanie Lekocevic/Columbia-Greene Media

COXSACKIE — Some could view what happened to a 200-year-old Coxsackie tree as fate, divine intervention or just plain old physics.

The tree on Mansion Street was torn out of the ground by its roots in a massive thunderstorm and microburst that pummeled the village of Coxsackie on July 7.

But as cleanup in the village continues, a weird quirk of fate — or science — uprighted the tree back where it came from.

“I had a worker out there with a chainsaw cutting down additional lengths of the tree because we were going to use heavy equipment to lift it,” said Paul Seney, owner of W.C. Brady’s Sons Funeral Home and the property where the tree is located. “The tree was still on the sidewalk and he was cutting length from the tree. When he got down from the tree, the tree uprighted itself back into the hole where it was ripped from, so it is standing back up,” Seney said.

The tree, thought to be more than two centuries old, stood about 100 feet tall on Mansion Street, with about 80 feet hollowed out inside the tree, Seney estimated.

The weight at the tree’s roots — which included a substantial amount of earth that came up with the roots when the tree fell — was so bottom-heavy the tree popped back into the hole, Seney said.

The return of the tree to its original space might seem like divine intervention to some, but Seney attributes it to the laws of nature.

“It sounds miraculous, but physics defeats all miracles,” Seney said.

Funeral assistant Jennifer McKeon, who works at Richards Funeral Home in Cairo, which Seney also owns, was there when it happened.

“When they cut one part of the top off, it stood back up into the hole. I was there,” McKeon said. “It was odd to see — the top (of the tree) came off and the tree just popped back up.”

The tree has stood as a local landmark in front of the funeral home since the business’s founding in 1840, Seney said.

The tree’s return sparked another idea for Seney — to turn the remains of the tree into a massive monument to the residents and first responders who came to their neighbors’ aid in the wake of the storm that felled the tree.

Seney, his sister Shannon Seney and McKeon are now leading an effort to raise about $10,000 to pay an artist to carve a large owl into the tree’s remains, along with adding boulders, benches, flowers and other landscaping to create a pocket park commemorating the community’s response to the storm.

“What compelled me to do this is the immediate response not only from the community members but from rescue and fire services, law enforcement, the county, other communities who came to help — everyone was on point and it was instant,” Seney said. “So I thought, what a great monument for Coxsackie, honoring the loss of the tree and the community that responded, and as an everlasting monument for that event.”

Shannon Seney said the monument would also commemorate the life of Richard Vigilo, the funeral home’s former owner and a staple in the community, who died Jan. 10.

“We had some discussion about creating a monument of sorts to commemorate Richard Vigilo, the former owner of the funeral home, and to commemorate the camaraderie of the community,” Shannon Seney said. “Within five minutes of the storm being over, every department was on scene, neighbors were making sure others were OK — it was very heartwarming to see civilians along with the rescue companies and the fire departments and the sheriff’s department — everyone was helping everyone else.”

The monument would take the form of an owl because that is the official “symbol” of Coxsackie. The town’s name is thought to have been derived from a Native American term that loosely translated means “hoot of the owl” and “place of owls,” according to a history of the town penned by town historian Michael Rausch.

“We will carve the biggest Coxsackie owl that we can — if it ends up being 12 foot, so be it, but we will carve our community animal, which is the owl,” Paul Seney said.

Shannon Seney said the grassroots group is looking to work with artists, landscaping companies, construction companies, gardeners and donors to get the whole community involved in the effort.

Creating a monument to the community spirit shown on the day of the storm, and in the days that followed, is fitting, Paul Seney said.

“The tree fell for a reason and it is standing again for a reason, so I think something special has to take place,” he said. “I would like to see the entire community involved and plan an event to celebrate — an unveiling, so to speak.”