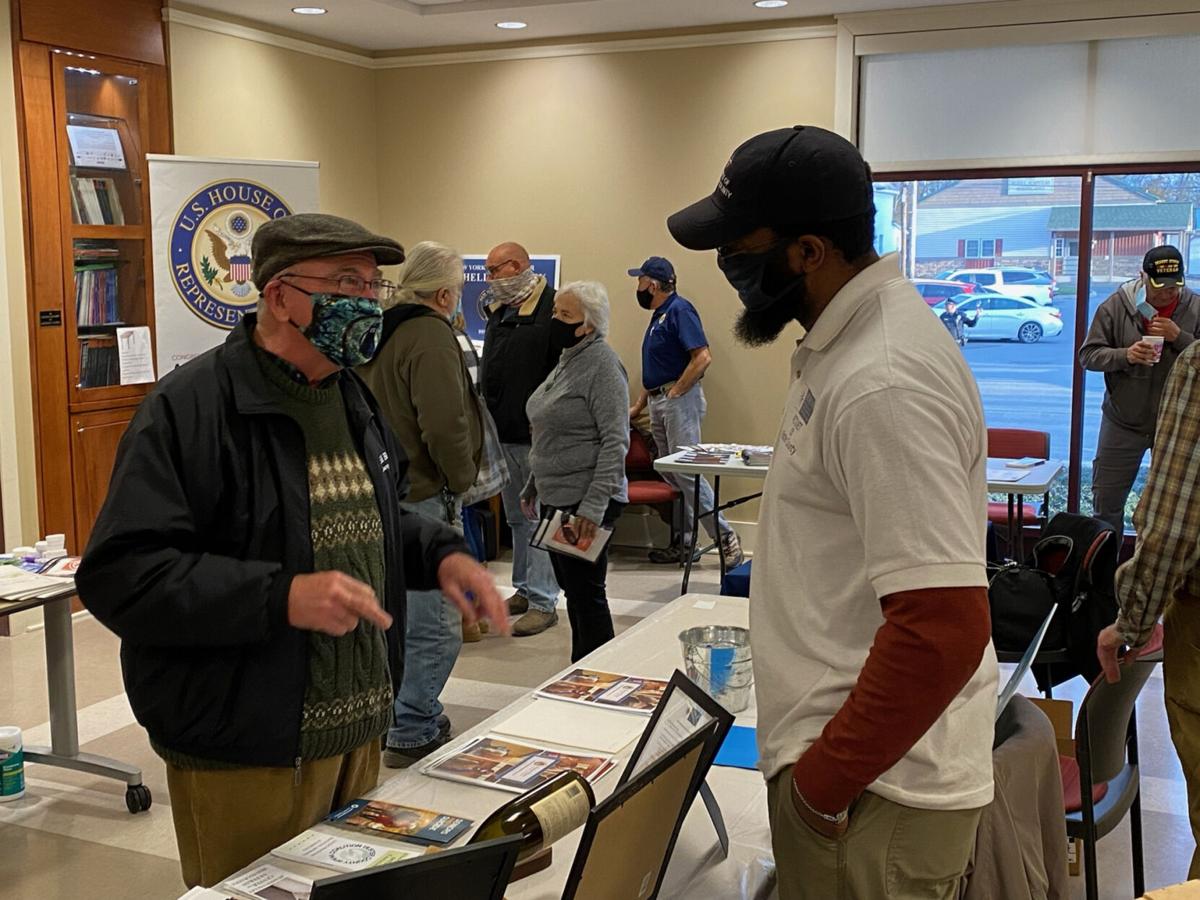 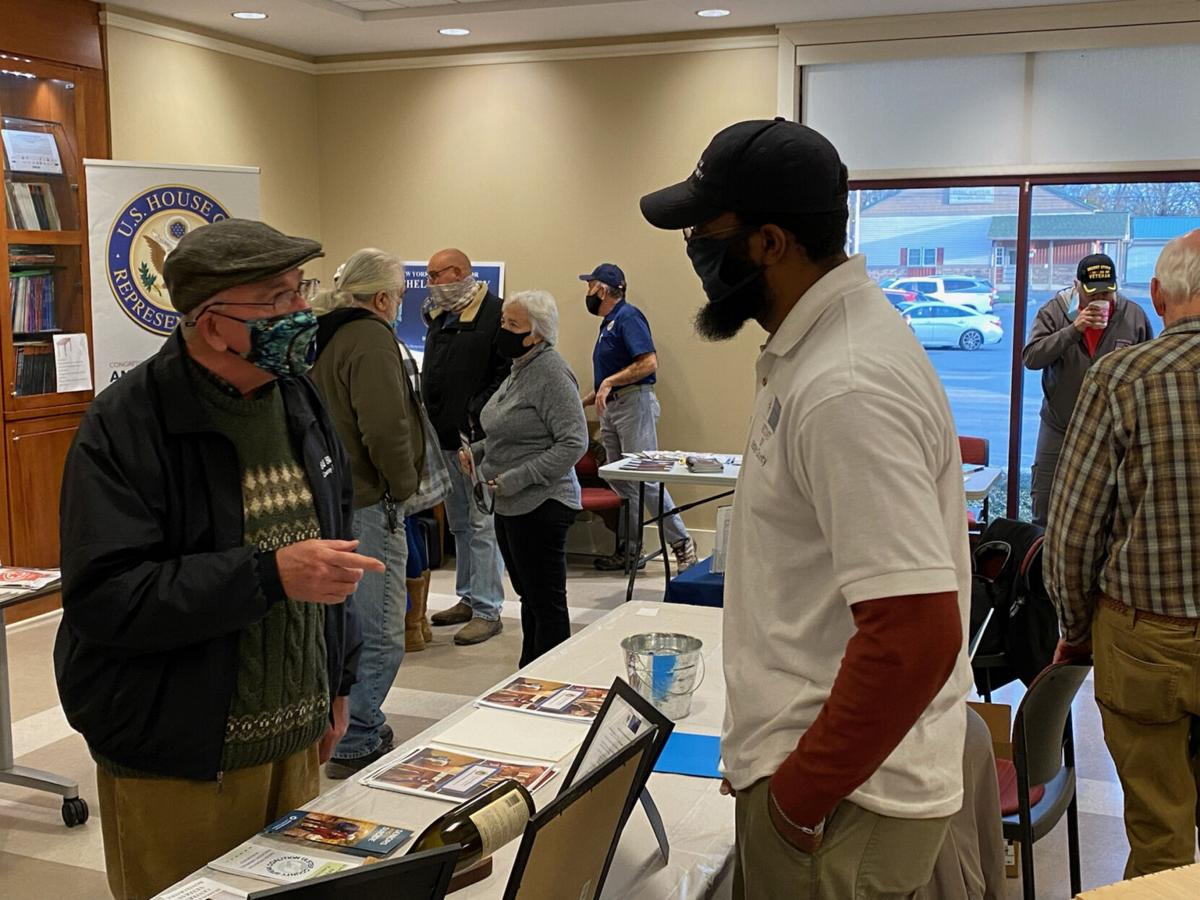 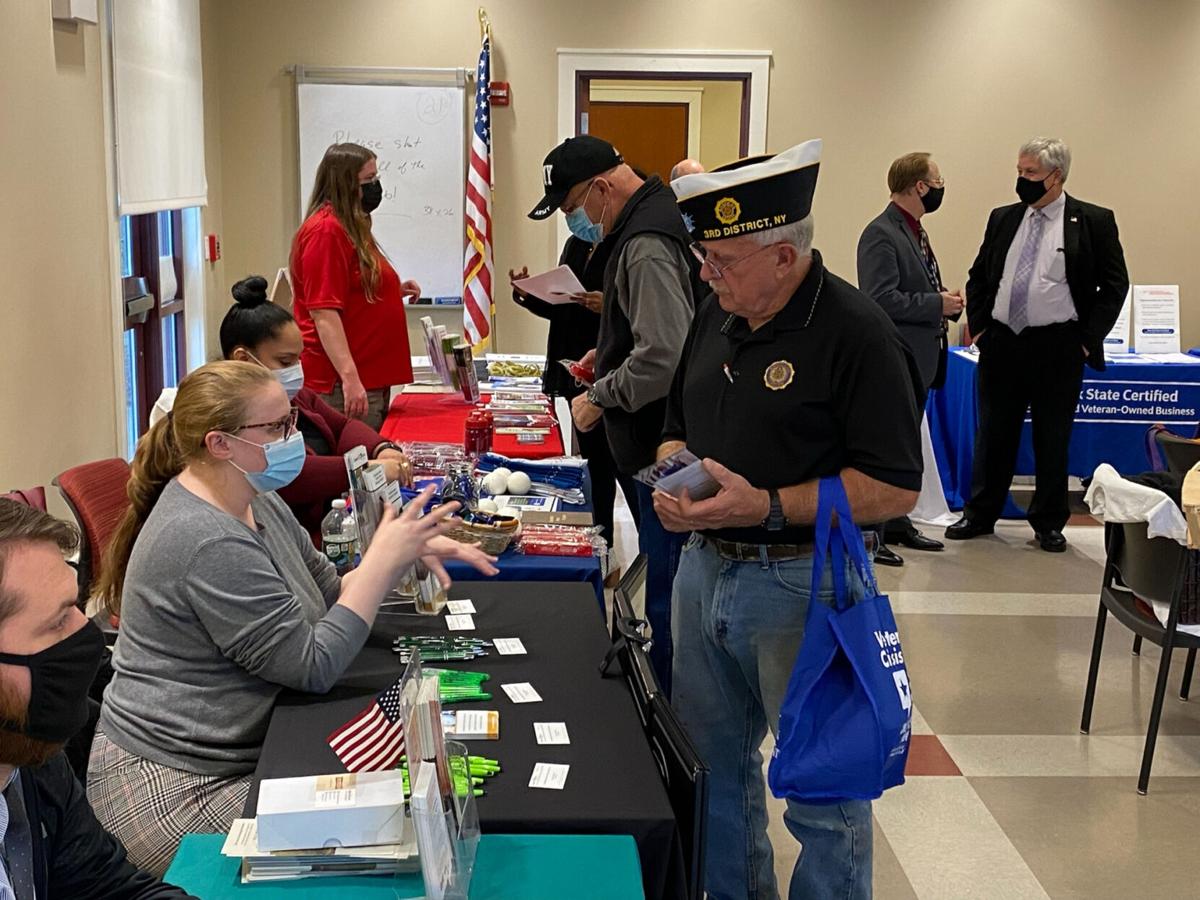 Veterans gathered information on resources available to them at the Veterans Resource Fair in Cairo on Tuesday. 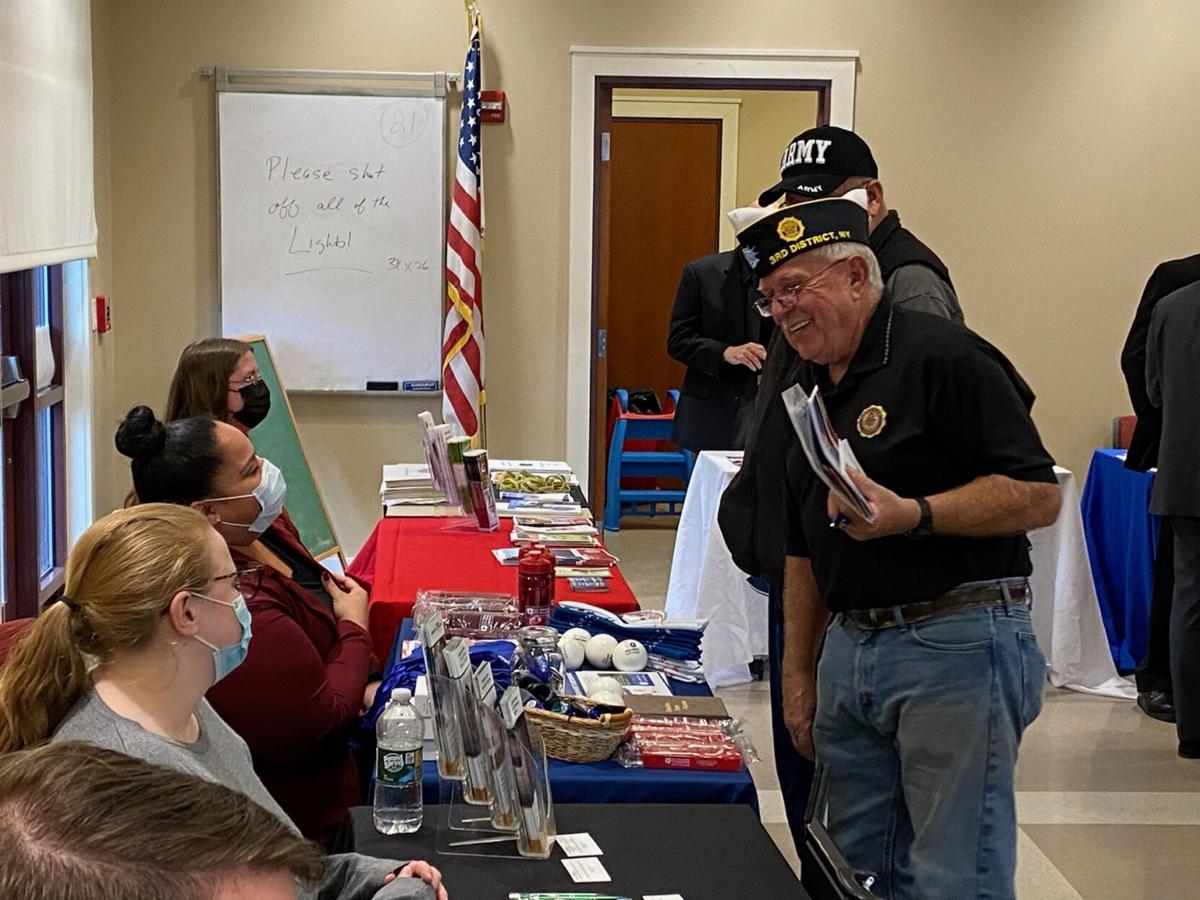 Veterans gathered information on resources available to them at the Veterans Resource Fair in Cairo on Tuesday.

CAIRO — Veterans in need may not always be aware of the government and nonprofit resources available to them, and in an attempt to rectify that problem, service members from throughout Greene County gathered at the Cairo Public Library on Tuesday for a Veterans Resource Fair.

Dozens of veterans ventured to the library to participate in the fair, speaking to representatives from 18 local organizations and collecting literature on benefits and programs that might be available to them.

State Sen. Michelle Hinchey, D-Saugerties, organized the event but missed the fair since she was quarantined due to a Nov. 11 positive COVID-19 diagnosis.

Greene County Legislator Harry Lennon, R-Cairo, toured the fair and noted it was the first of its kind in the county in his recollection.

“I’m hoping we build on this and see more of this in the future,” he said. “The veterans deserve it. The sacrifices they made for this country, we can never thank them enough. Anything with veterans I’m always there to support. I’d like to thank Sen. Hinchey for putting this thing together. It looks to be very successful.”

“We did a lot of research to find as many organizations as we could that touch on veterans’ issues or might be able to help veterans,” Goldman said. “We spread the word far and wide to invite them and to offer them to come here. Everyone said yes right away.”

Chris Algozzine manned the booth for American Legion Post 983 in Cairo and handed out pamphlets to local veterans about the benefits of joining his organization.

“It’s extremely important to be able to get the information out to the men and women who’ve served our country,” Algozzine said. “A lot of our veterans haven’t been able to have face time with groups like this. So to be able to get them out into a setting like this where they can ask their questions is just incredible.”

Myriad organizations were represented at the fair, including officials from Columbia-Greene Community College, Cornell Cooperative Extension, Albany Therapeutic Horse Riding Center and Soldier On, a veteran outreach program based in Massachusetts that fights to end veteran homelessness.

“For veterans that are homeless or at imminent risk of being homeless, we help them to try to find employment opportunities or housing that’s affordable for them,” Soldier On case manager Adam Schnopp said. “We try to get them services that support them long-term for their permanent housing needs.”

Veteran George Greiner made the rounds at the fair, collecting information packets from several tables.

“The benefit of an event like this is that we find out who we missed in the community as far as fellow veterans,” said Greiner, who also serves as the vice commander of the American Legion’s Third District. “It’s a great thing for veterans to know that there’s something out there. I’m interested in finding out what’s available for the veterans as far as the crisis lines, any health care programs or legal issues that could be coming up. There are enough politicians here that we should be able to get some straight answers hopefully.”

Chris Hanse from U.S. Rep. Antonio Delgado’s office met with veterans at the Tuesday afternoon fair and distributed handouts explaining how veterans could most efficiently access federal benefits available to them.

“The importance of having the congressman’s office here is to let veterans and community members know that our office does provide resources to our veterans,” he said. “We want to provide information to them and let them know if they have any difficulties with federal agencies, we will be here to help them and assist them.”

Goldman delivered the fair’s opening remarks and welcomed the veterans and organization representatives.

“The senator is very, very sad to miss this,” she told the crowd. “Unfortunately, she’s still at home quarantining.”

Greene County Legislator Ed Bloomer attended the fair and noted that many veterans endure long-term effects from their service in the battlefield.

“Not everyone suffers from PTSD and not everyone suffers it right away,” he said. “It’s something that can catch up with you later on. It’s excellent that there are a lot of programs and a lot of things that can help veterans that they don’t know about. This just gets the word out.”

Greene County Legislator-elect Sherry B. True said she heard from many veterans in recent months that they weren’t sure where to turn for help.

“I feel most folks don’t know what’s available out there,” she said Tuesday. “So this is one resource for them where all of the resources can come together for them. I’m loving this turnout and I hope we can do more of these because they’re very important for the community. No matter where you are in Greene County, you have somebody there for you. That’s what I love about all of these folks that are here today.”

The senator has additional resource fairs scheduled for Saugerties and Altamont in December but no return date has been announced for another fair in Greene County.

Gavin Walters, program manager of the Joseph P. Dwyer Veterans Peer Support Project in Ulster County, met with vets at the Tuesday fair and spread the word about his program, which connects vets in crisis with their peers.

“The biggest importance for something like this is just having the resources,” he said of the veterans fair. “The resource that’s available to the public is information that they can use either today or two years from now. This will help them get what they need. Us being here is saying to the vets if you want to help build a kayak or doing yoga or even if you know a vet that’s homeless, we have resources here that are available to you.”