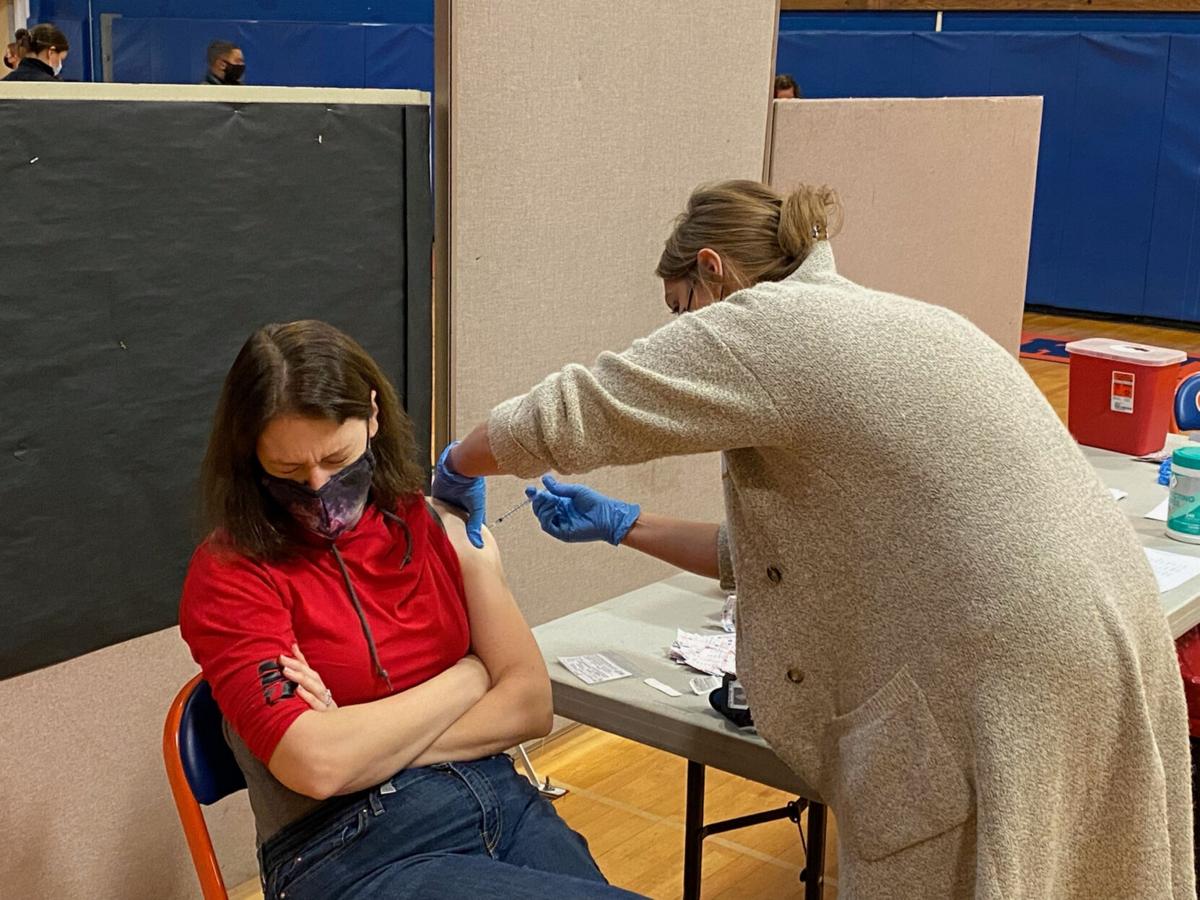 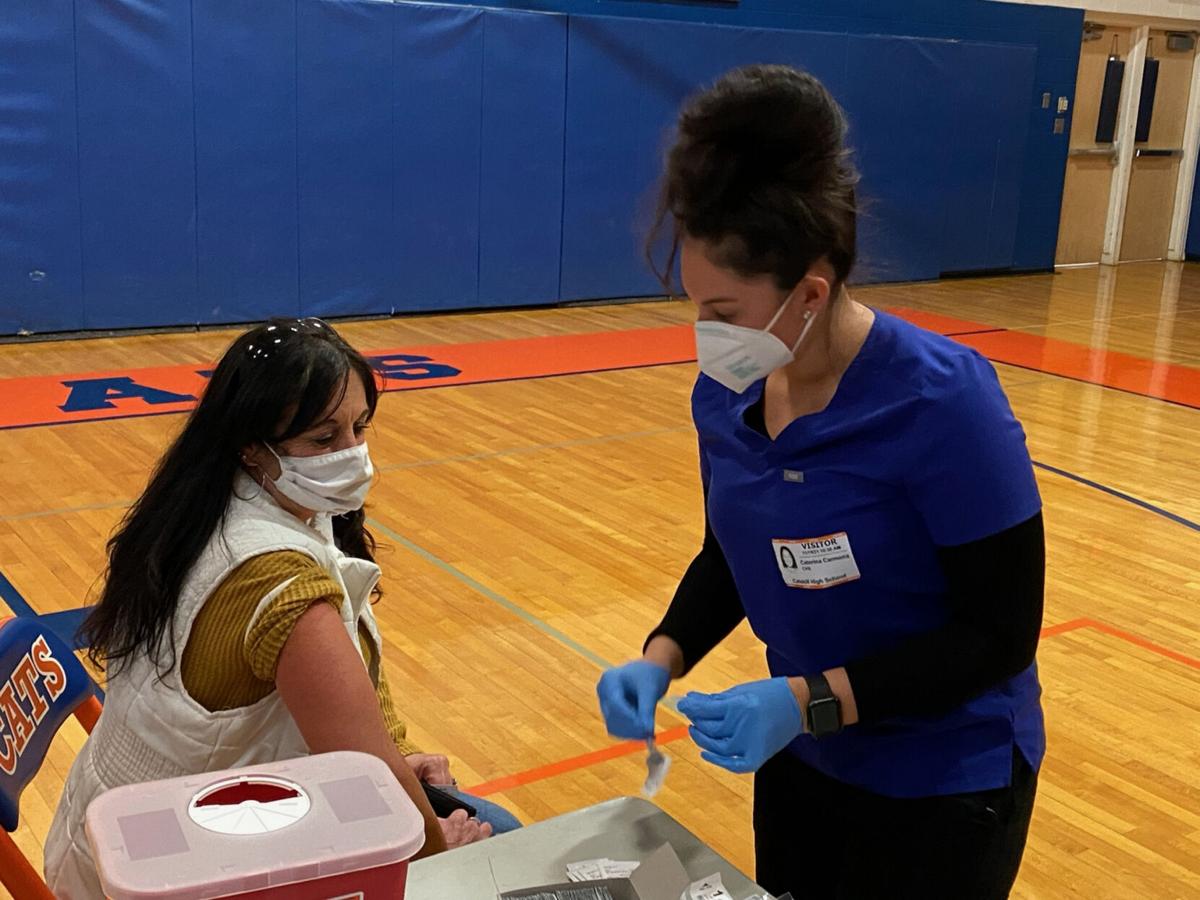 Susan Sirianni, a teaching assistant at Catskill Elementary School, receives a vaccine booster shot at a Vax to School clinic on Friday at Catskill High School. 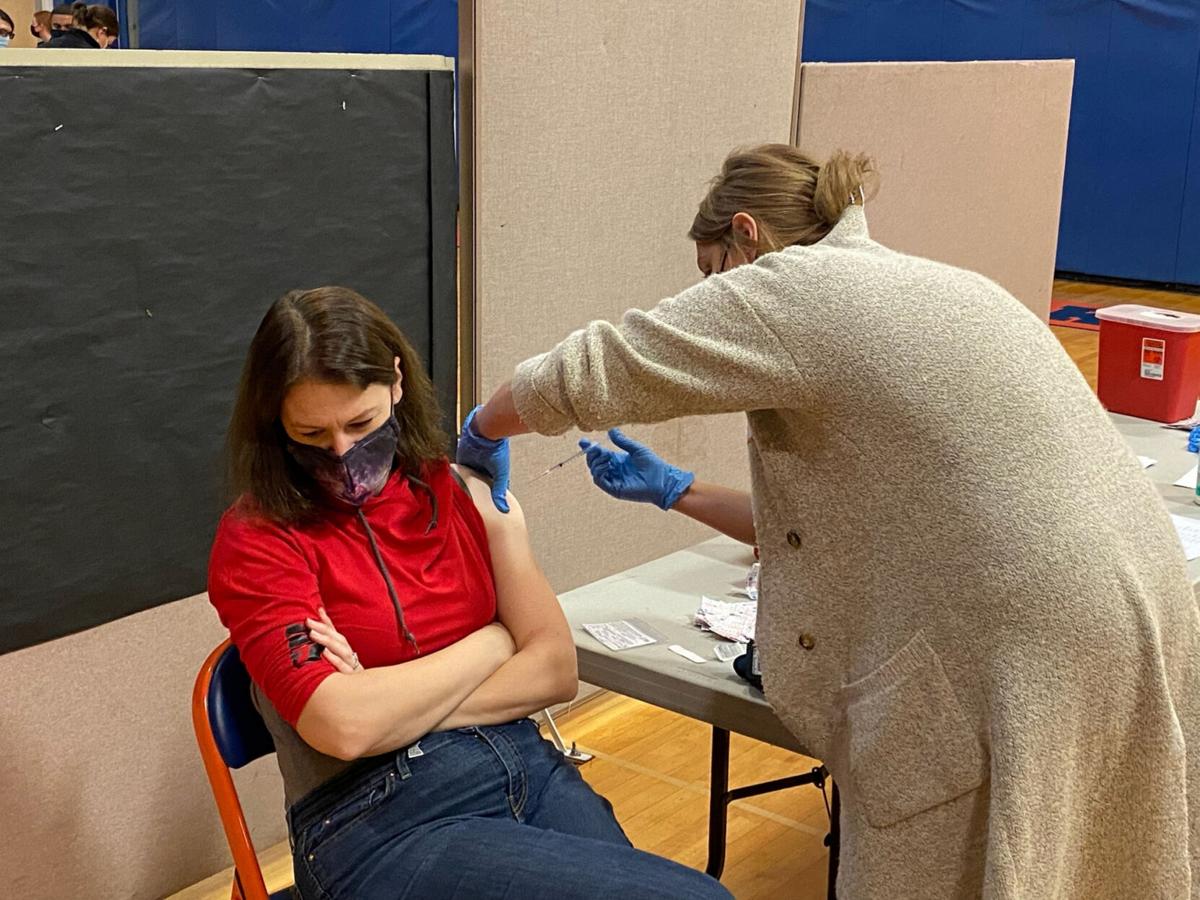 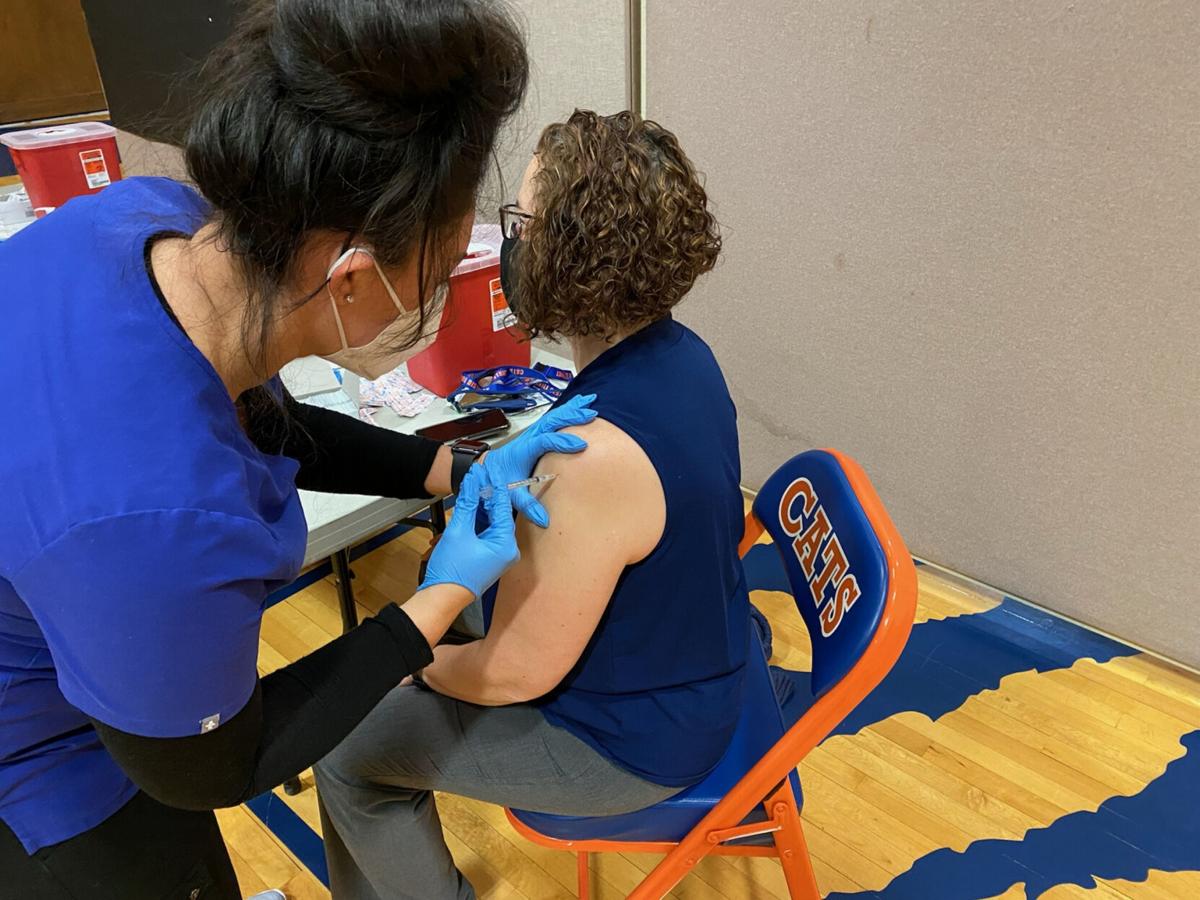 Trinya Warner, a school psychologist at Catskill Middle School, gets a vaccine booster shot at a Vax to School clinic on Friday at Catskill High School. 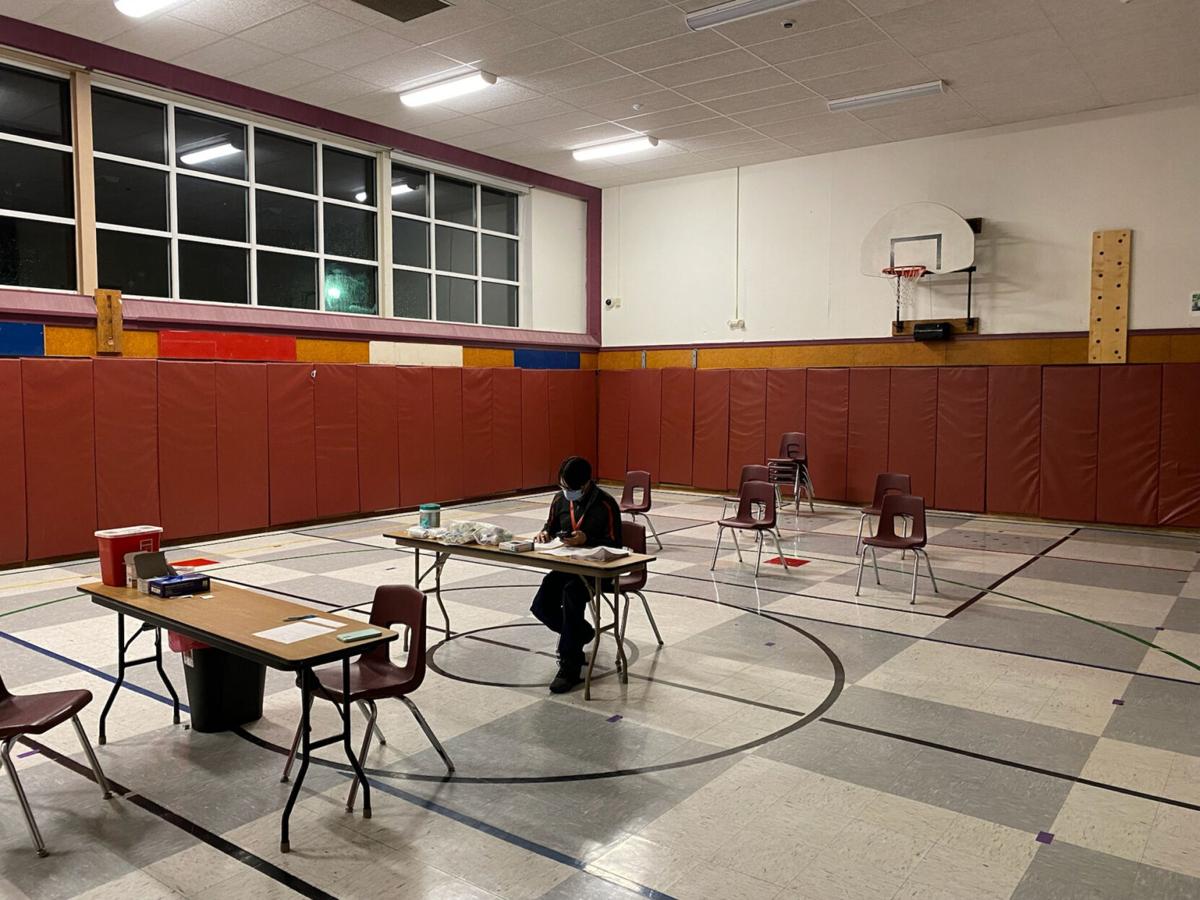 Susan Sirianni, a teaching assistant at Catskill Elementary School, receives a vaccine booster shot at a Vax to School clinic on Friday at Catskill High School.

Trinya Warner, a school psychologist at Catskill Middle School, gets a vaccine booster shot at a Vax to School clinic on Friday at Catskill High School.

While the attendance at the Greenville vaccine site was sparse, a steady stream of patients made their way into the CHS gym to receive their shots. A total of 95 people were slated to receive vaccinations, with six children between the ages of 12 and 17 scheduled to receive a shot Friday.

The vaccine clinics were restricted to children ages 12-17 and all adults over the age of 18 who had received their second vaccine dose at least six months ago.

Cody Osborn, a retired teaching assistant for the district who now works as a monitor at Catskill Middle School, just received his shot and was enthusiastic about it.

“I’m a firm believer in the shot,” he said. “My whole family has received the shots and I think this is the way we’re going to get through this pandemic if enough people decide to get vaccinated. Like most people, I’m sick and tired of mask mandates and all of these other things. I certainly follow them and believe in them wholeheartedly, but I think like most people we’ve had enough of this and if I can help in any little way, this is my way to contribute.”

District employees are not required to get booster shots.

Slightly more than 63% of Greene County residents have received at least one vaccine dose as of Friday.

VIP Star Network site administrator Mark McCoy was representing the vendor hosting the clinics. McCoy and his team, which included a pair of nurses to administer the shots, also did clinics at Coxsackie Middle School and the same Greenville site three weeks ago on the same day.

“That was a big day, I think we did 140 booster shots that day for the teachers and the staff,” McCoy said. “We also did just a small handful of children at those sites. We’re picking up and doing more events all over the state of New York.”

Neither vaccination site this week in Greene County had Moderna vaccine doses on hand, but individuals who received Moderna shots previously were able to mix and match with Pfizer booster shots.

“That’s important now because Moderna is getting very hard to find,” McCoy said. “So the people who have done Moderna cannot always get their booster when they need to or want to.”

The Catskill clinic was held Friday from noon to 6 p.m. The high school had a half-day on Friday for parent-teacher conferences, so no classes were in session during the clinic.

Michelle Storrs-Ryan, a teacher in the Catskill district, said it was critical for her to receive the booster shot.

“It’s really important for me to be able to be here every day for my students,” she said. “Because they can’t learn if I’m at home.”

Held on a rainy Thursday night and tucked into the rear north corner of the elementary school complex in the school gymnasium, the Greenville clinic was not well attended.

Over the course of the four-hour vaccination session, only two shots were administered.

One family was turned away from the Greenville vaccine site Thursday because it had not been six months since they had received their second shots.

“The only thing you need to get a shot is proof that it’s been six months since your second shot or three weeks since your first,” McCoy said.

Trinya Warner, a school psychologist at Catskill Middle School, said she received the booster shot on Friday in order to protect herself and her community.

“I got the shot because I’m around kids, I’m at risk and I have kids at home,” Warner said. “I just don’t want to put myself or other people at risk. So I’ll do whatever I can to do that.”

The vaccine clinics were held as part of an initiative from New York Gov. Kathy Hochul that saw 24 new Vax to School sites announced for the schools across the state.

“The vaccine is safe, effective, and the best way to keep New Yorkers young and old protected from COVID-19,” Hochul said in a statement. “To date, 189 Vax to School sites have made the vaccine available and accessible to New York’s children and their families. We will continue to work with our partners on the ground in all corners of the state to encourage even more young New Yorkers and their parents and guardians to get vaccinated as we head into the holiday season.”

My sister retired a year early at 64 to avoid bringing COVID-19 home to my father, who was 63. Unfortunately, four days after testing positive, her husband Jerry died from COVID-19.

In what is simple malpractice, the Greene County Public Health website doesn't recommend getting vaccinated. https://www.greenegovernment.com/departments/public-health

A reason is that the director, Kimberly Kaplan, lacks a Master in Public Health ("MPH"). Another is her marriage to Greene County Attorney Ed Kaplan. These two facts cause a lack of professional independence and result in the politicization of our public health — to our serious detriment.